Sarah Harding is reportedly set to release a never-before-heard solo song to raise funds for charity.

The singer, 39, is releasing track Wear It Like A Crown, which she rediscovered while writing her book, at midnight on Wednesday.

Money made from the tune will be donated to The Christie NHS Foundation, where Sarah has received treatment herself while battling breast cancer.

It comes after Sarah revealed in an extract from her book Hear Me Out that tumours in her brain and lung have shrunk with treatment following her diagnosis last year.

New music! Sarah Harding is releasing a solo song called Wear It Like A Crown, which she recorded 10 years ago, to raise money for charity (pictured performing in 2014)

The exciting upcoming release, Wear It Like A Crown, was recorded a decade ago and is much loved by the Girls Aloud star.

A representative told MailOnline: ‘It’s an old song from 10 years ago that Sarah found in the archives when she was researching for her book.

‘She loves the song and her team are making available for the fans.’ 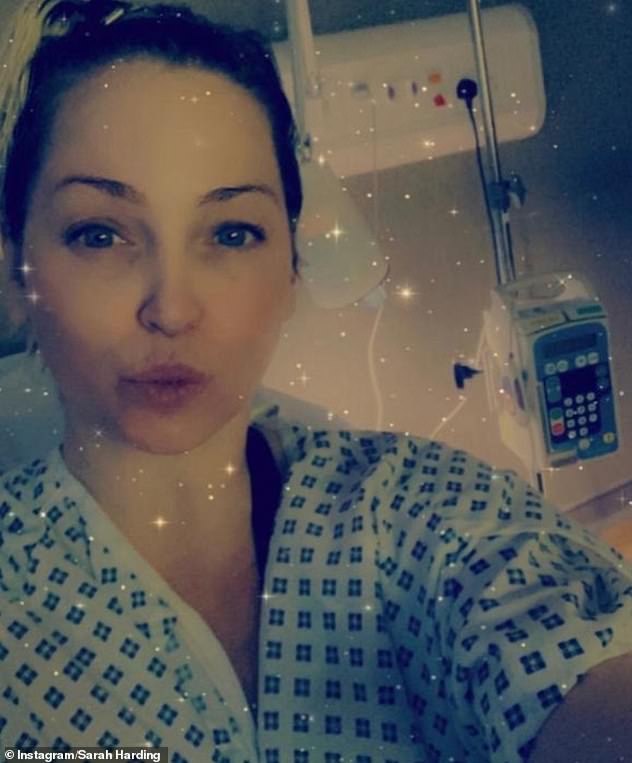 Incredible: Money made from the song will be donated to The Christie NHS Foundation, where Sarah has received treatment herself while battling breast cancer

The release comes after Girls Aloud fans sent the band’s hit Hear Me Out to number one on iTunes following the release of Sarah’s book of the same name.

Nadine Coyle, Kimberley Walsh and Nicola Roberts all took to Twitter last Thursday to gush about the ‘amazing news,’ adding that it would be ‘really special’ to tell their bandmate their song had topped the charts.

After a Girls Aloud fan tweeted that their song Hear Me Out, which featured on their 2004 album What Will The Neighbours Say?, had reached number one, Nadine shared her delight by retweeting the news.

She wrote: ‘You guys!!! Sarah will really appreciate this & so do I!!! Thank you all for everything!!! Forever the best fan base ever!!!! Keep downloading!!!’ 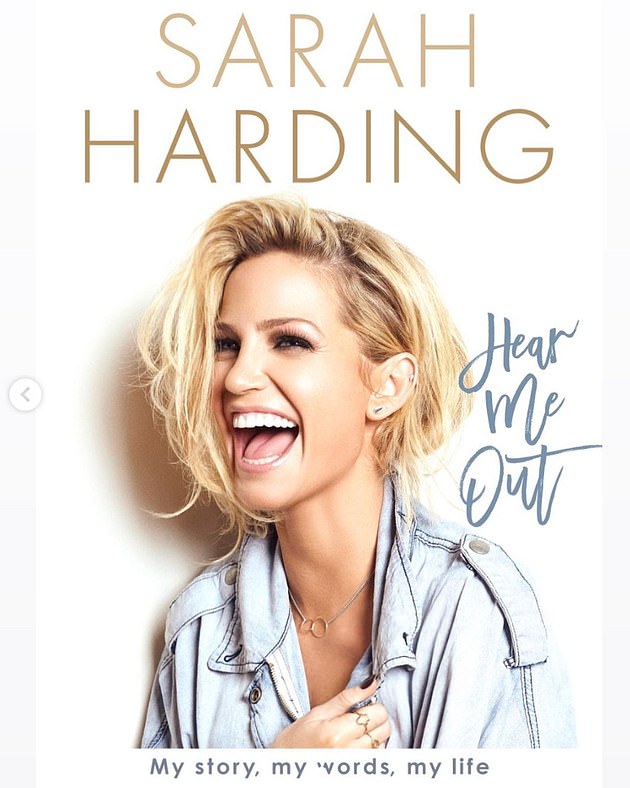 Hear Me Out: Sarah’s book was released last Thursday and it’s thought she rediscovered her song while writing it

Nicola wrote: ‘This is amazing! Thank you for doing this for Sarah. To be able to tell her this is so special.’

Kimberly added: ‘AMAZING!!!!!!!!! Thank you all this is so special what a lovely bunch you are.’

Hear Me Out was never released as a single when the band unveiled their second album, but was sent soaring in the charts following the release of Sarah’s book on Thursday.

Earlier in the day the star took to Instagram to thank her followers  for their support, after recalling how the idea to write her autobiography was a ‘dream last summer’ and that she couldn’t believe it is now a ‘reality.’ 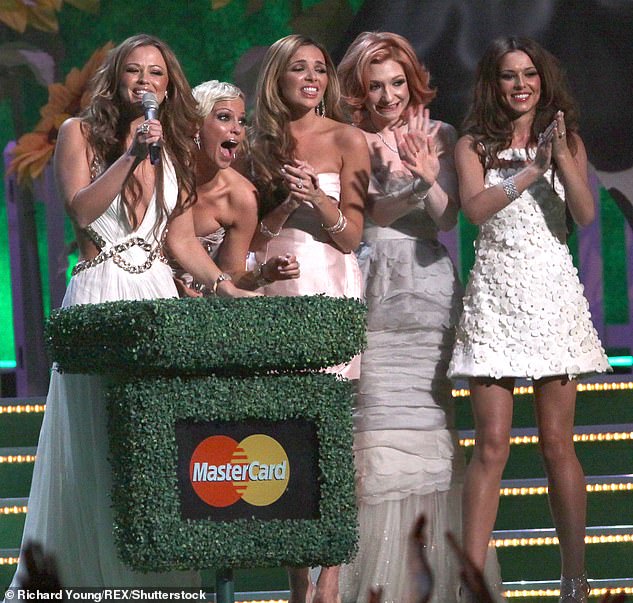 We did it! It comes after Girls Aloud fans sent the band’s hit Hear Me Out to number one on iTunes following the release of Sarah’s book of the same name 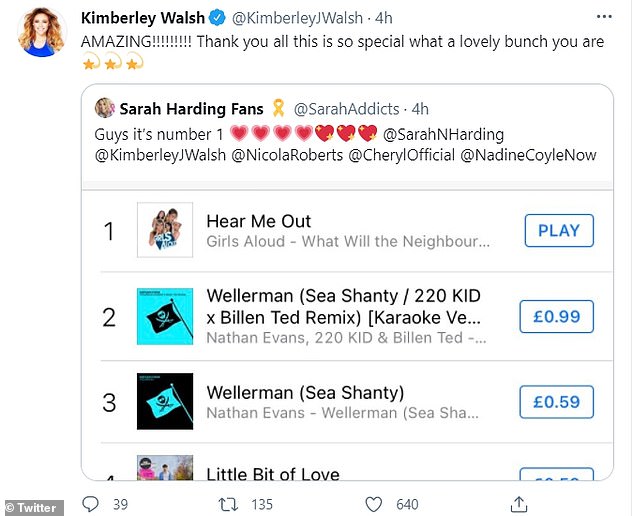 Over the moon: Kimberley Walsh joined several of her bandmates retweeting news the song had topped the charts, 17 years after its release

Sarah penned: ‘I can’t thank everyone enough for all the kind and loving messages that I’ve received since the weekend. It means so much to me and to my mum.

‘Today’s a special day because it’s publication day for Hear Me Out. At last. I actually can’t believe I’ve done it! What started out a dream idea last summer is now a reality.’

It comes after Sarah revealed in an extract from Hear Me Out that tumours in her brain and lung have shrunk with treatment following her breast cancer diagnosis last year.

The singer, who revealed she had been battling breast cancer in August 2020 and having weekly chemotherapy sessions, recently said she does not know how many months she has left to live after her cancer spread to her spine. 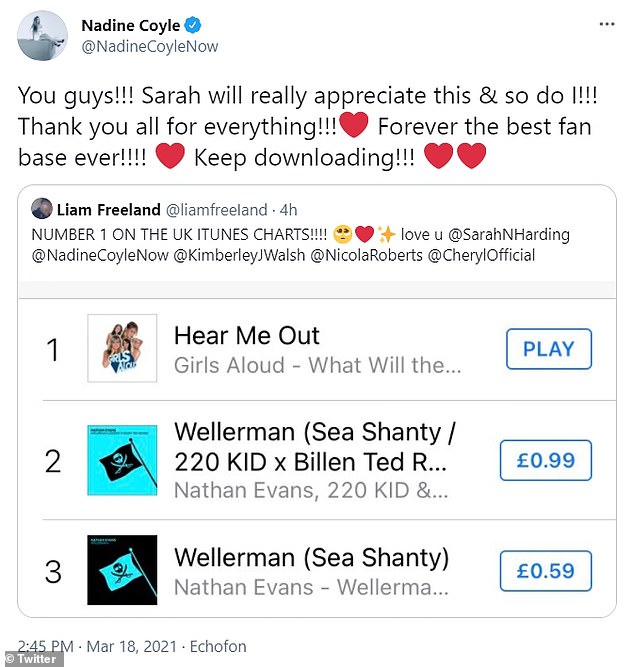 Thrilled: Nadine Coyle gushed that Sarah would ‘really appreciate’ fans getting the song to number one, after the star’s autobiography was named after the song 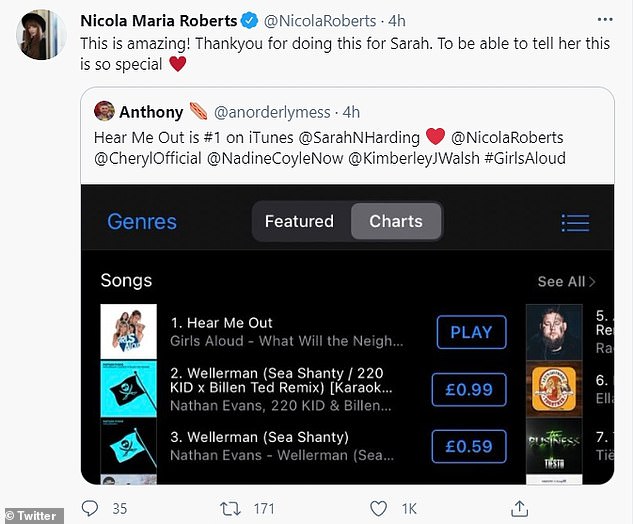 Elated: Nicola Roberts joined Kimberley and Nadine praising their fans for downloading the song, which appeared on the band’s 2004 album What Will The Neighbours Say?

In an extract from her autobiography – Hear Me Out – obtained by the Daily Star, the singer spoke of her joy that treatment – including weekly chemotherapy sessions – had achieved this milestone and that she was able to enjoy a ‘relaxing Christmas.’

Ending the book, she wrote: ‘MRI scans at the end of December revealed that the tumours in my brain and in my lung have shrunk a bit with the treatment.’

The star said that while she didn’t know ‘exactly what this means’, ‘right now, every little victory feels momentous.

She continued: ‘With this news under my belt, I was able to enjoy a relaxing quiet Christmas with mum and yes, I got plenty of lovely Christmas pressies.’

The star ends the book with:’At the moment, I’m just grateful to wake up every day and live my best life, because now I know just how precious it is.’

In a further recent excerpt from the book, shared by The Times on Saturday, Sarah said Christmas 2020 was ‘probably her last.’

In the latest tragic update from the book, she penned: ‘In December my doctor told me that the upcoming Christmas would probably be my last. I don’t want an exact prognosis. I don’t know why anyone would want that…

‘Comfort and being as pain-free as possible is what’s important to me now. I’m trying to live and enjoy every second of my life, however long it might be. I am having a glass of wine or two during all this, because it helps me relax.’

The singer added that she now wants to try and ‘enjoy’ herself as she doesn’t know ‘how many months I’ve got left.’

At present, the Call The Shots hitmaker is considering her treatment options of the secondary tumour at the base of her spine, which may now have spread to her brain. 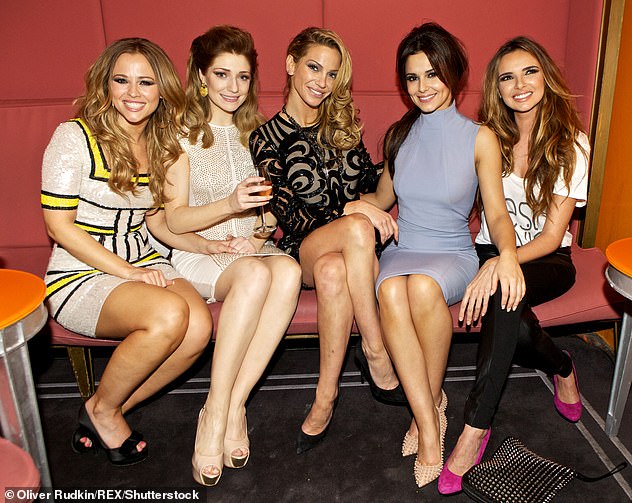 Bond: The singer also discusses reuniting with her bandmates Cheryl, Nadine, Nicola  and Kimberley at Soho farmhouse recently in her book (pictured 2012)