The latest series of American Crime Story, called ‘Impeachment’, will focus on the Clinton–Lewinsky scandal, which saw President Bill Clinton impeached for his affair with White House intern Monica Lewinksy, that lasted between 1995 and 1997.

But now, 24 years on, where are the key players in the scandal and subsequent impeachment hearing that gripped the nation?

At the centre of the scandal with President Bill Clinton was White House intern Monica Lewinksy, 22 at the time, who later said she had sexual encounters with Bill Clinton on nine occasions from November 1995 to March 1997.

In the years after the scandal, she struggled to stay out of the spotlight, and after a number of TV apprances, she moved to London study social psychology at the London School of Economics.

She graduated with a Master of Science degree, and her thesis was titled, ‘In Search of the Impartial Juror: An Exploration of the Third-Person Effect and Pre-Trial Publicity.’

For the next decade, she did what she could to stay out of the spotlight, living in London, Los Angeles, New York, and Portland, but remained notorious and recognisable, and struggled to find work.

In 2014, she wrote an article for Vanity Fair titled ‘Shame and Survival’, and later joined the magazine as a contributor.

In October 2014, she took a public stand against cyber-bullying, referring to herself as ‘patient zero’ of online harassment, and has become an activist on the issue. She has delivered TED talks and has called for a more compassionate Internet.

In 2019, she was interviewed by John Oliver on his HBO show Last Week Tonight with John Oliver, where they discussed the importance of solving the problem of public shaming.

The pair considered how her situation may have been different if social media had existed at the time that the scandal broke in the late 1990s.

Lind Tripp, a friend, colleague and confidant of Lewinksy, was an American civil servant, working in the Pentagon’s public affairs office.

She secretly recorded Lewinksy’s confidential phone calls in which Lewinksy told her about the relationship she was having with the then-President of the United States.

Tripp gave the tapes to in exchange for immunity from prosecution for wire tapping, and eventually both Clinton and Lewinsky had to appear before a grand jury to answer questions. 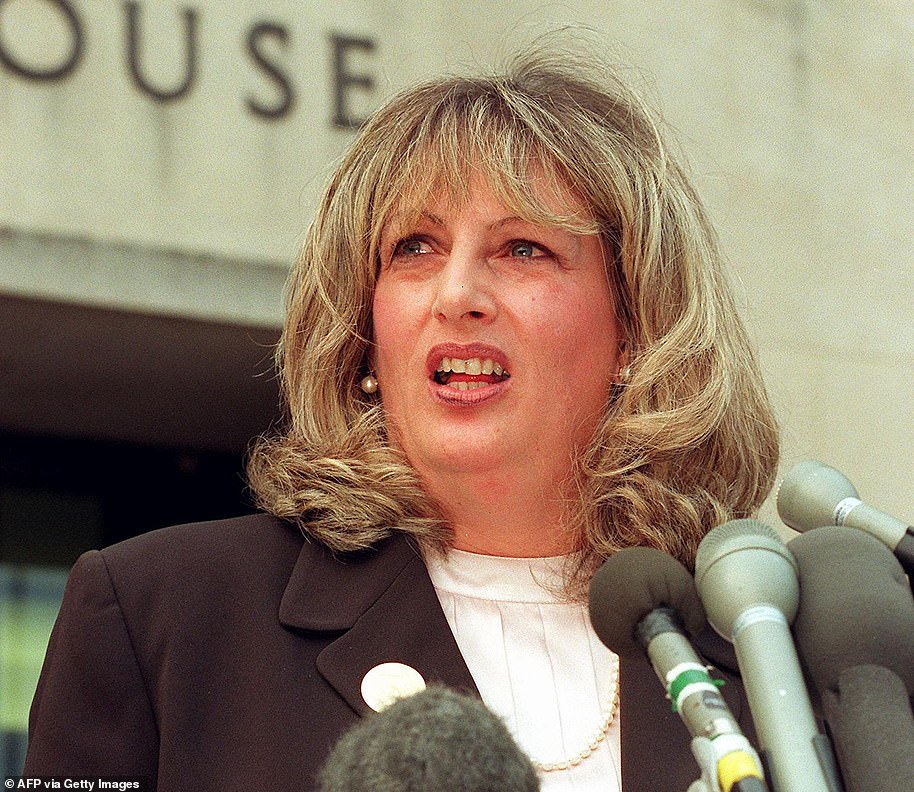 Pictured: Linda Tripp speaking to the press outside of the Federal Courthouse 29 July 1998 in Washington, DC

When asked if she had any last words in the trial, Lewinksy simply said: ‘I hate Linda Tripp.’

From 2004, Tripp and her husband, Dieter Rausch lived in Middleburg, Virginia. There, they ran a German winter-themed year-round Christmas store called the Christmas Sleigh.

Bill Clinton left the White House on January 20, 2001 – being replaced by George W. Bush – surviving the impeachment trial and calls to resign.

Since then, he has continued to be active in public life, giving speeches, fundraising, and founding charitable organizations.

He has also spoken in prime time at every Democratic National Conventions, and campaigned on behalf of Democrat party candidates.

He has written numerous books and has been a paid speaker at a number of events, often earning six figure pay-cheques as a result.

In 2018, Clinton said he did not owe Monica Lewinksy an apology in light of the #MeToo movement, but later backtracked.

‘The important thing is that was a very painful thing that happened 20 years ago and I apologized to my family, to Monica Lewinsky and her family, to the American people,’ he said. 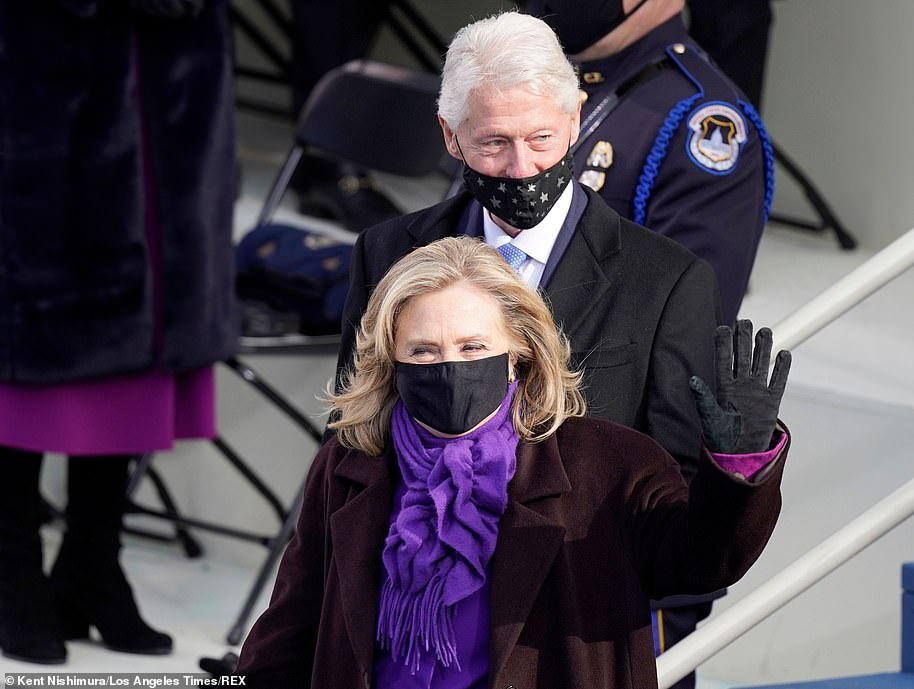 Former U.S. President Bill Clinton arrives with former Secretary of State Hillary Clinton to the inauguration of U.S. President-elect Joe Biden on the West Front of the U.S. Capitol for the 59th presidential inauguration in Washington, D.C. on Wednesday, Jan. 20, 2021

After the evidence about her husband’s affair became impossible to deny, Hillary Clinton issued a statement reaffirming her commitment to their marriage.

She has since gone on to continue her political career, serving as a U.S. Senator from New York, and later as U.S. Secretary of State under president Barack Obama.

Like her husband, she has written a number of books and has appeared at numerous speaking events, and since January 2020, she has been the Chancellor of Queen’s University Belfast in Belfast, Northern Ireland.

Kevin Starr is an American lawyer who served as a United States circuit judge and 39th solicitor general of the United States, and whose investigation eventually led to the impeachment of President Clinton.

Since then, he has gone on to be involved in a number of other high-profile cases. 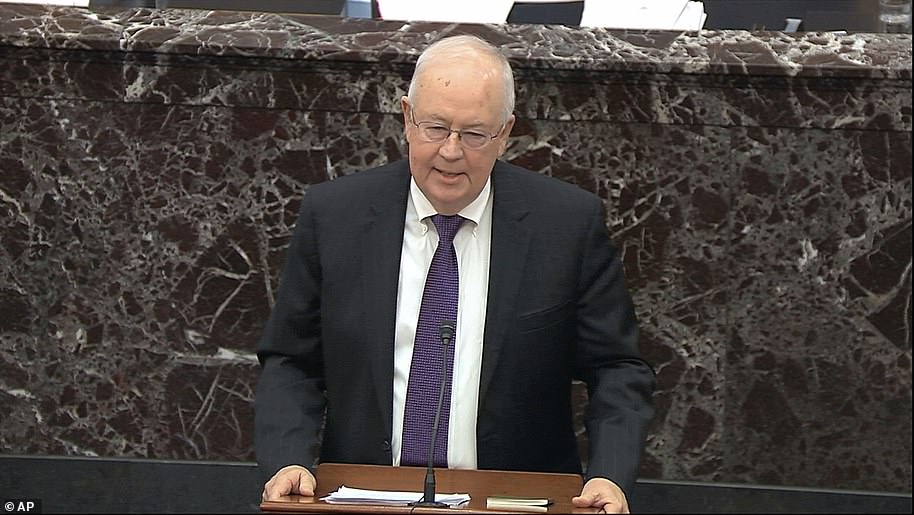 Ken Starr, an attorney for President Donald Trump, speaks during the impeachment trial against Trump in the Senate at the U.S. Capitol in Washington, Monday, Jan. 27, 2020

In 2020, Starr was announced as a member of President Donald Trump’s legal team for his Senate impeachment trial. He argued before the Senate on Trump’s behalf on January 27, 2020. Trump was acquitted, only to be impeached again in January 2021.