SARAH RAINEY meets the 3D version of herself which could fool her husband!

She looks exactly like me — from the dimple on her chin down to the tiny scar on her right knee.

We share the same facial expressions, hand gestures and mannerisms.

Our voices are so similar that even my husband would struggle to tell us apart.

But when I reach out to touch the woman standing opposite me, something very strange happens. My hand goes right through her and comes out the other side, as if she’s made of thin air.

It’s not a ghost, however. Meet my hologram — a walking, talking, 3D version of me, indistinguishable in every way, except for the fact that she’s being beamed out of a computer to appear at my side.

Face-to-face with my holographic self, I feel like I’ve walked on to the set of a sci-fi film. Even up close, there is nothing to suggest she isn’t a living, breathing ‘me’. She can walk around, wave her arms and twirl on the spot.

It’s only when I try to shake her hand or lean on her shoulder, and end up clutching at nothing, that I remember she’s ‘Holo-Sarah’.

It may sound like the stuff of futuristic fiction but, according to experts, holograms will soon be part of our everyday lives — and they could be coming to a High Street near you.

From bank clerks to supermarket checkout assistants, doctors’ receptionists to schoolteachers, holograms are already being trialled to replace humans in locations up and down the country.

Since 2011, when the first holographic security staff (projected on to cardboard cut-outs) appeared at Manchester and Luton airports, holograms have popped up in airports, tube stops and train stations nationwide.

Recently Canadian researchers said they had developed technology that would enable people in different locations to appear as if they were in the same room, meaning employees can attend meetings without leaving their homes.

These hi-tech creations are even taking over the entertainment industry. Recently it was revealed that Abba will be recreated as virtual ‘Abbatars’ to perform at a concert in the autumn.

All four members of the band (now in their late 60s and 70s) have been digitally scanned and ‘de-aged’ using cutting-edge holographic technology, enabling them to sing and dance together on stage as they looked in their prime — without leaving the comfort of their sofas. 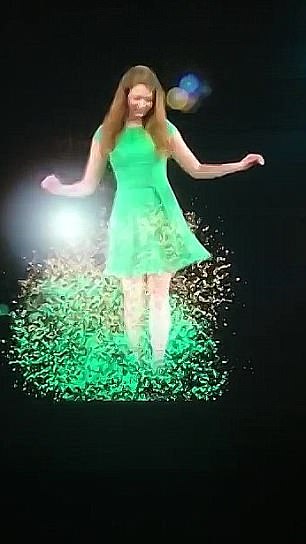 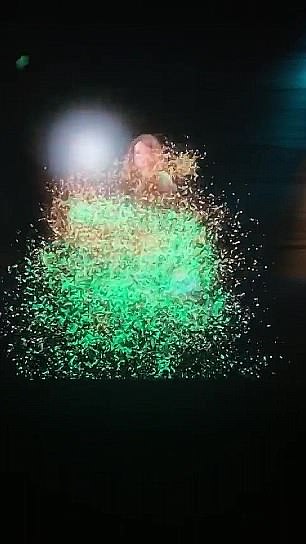 Sarah said that her holographic self had exactly the same facial expressions, hand gestures and mannerisms as she did

‘If you can’t tell the difference between the hologram and the real person, the possibilities are endless,’ explains Harry Singh, technical director of MDH Hologram, one of the world’s leading hologram makers.

‘The technology has come so far in the past few years that we could now beam a three- dimensional hologram of you around the globe, in real time, to hundreds of different locations. You could literally be in several places at once.’

So could holograms be the multi-tasking solution women have been waiting for?

Could I send my holographic self into work while I enjoy a day off, for example? And could ‘de-aged’ holograms be the secret to rolling back the years?

I’ve come to MDH’s headquarters in Harrow, Middlesex, to find out. Here, Harry and his team of holographic wizards turn ordinary people into digital versions of themselves.

Their day-to-day work ranges from recording CEOs who want to address a global workforce simultaneously, to working with international superstars — from Jennifer Lopez to Mariah Carey — who want glamorous holograms to sing and dance alongside them on stage.

They’ve created holographic runway models for Christian Dior, holographic adverts for shop windows and even made holographic flower displays for the wedding of one of the Kuwaiti royal family.

The first stage of the process takes place in the ‘dark room’, where blackout curtains block every chink of light. On a raised stage, I walk, talk and move around like normal, illuminated by 12 blindingly bright lights, as creative director Oliver Gingrich records on a camera that produces footage that is four times the quality of the HD (high definition) TV screens many of us have in our homes.

Somewhat disappointingly, there are no wires, cables or electrical currents attached to my limbs. Five minutes later and we’re finished — my hologram is ready to be brought to life.

Remarkably, the basic technology behind holograms (which comes from the Greek word meaning ‘whole drawing’) is nothing new.

In fact, it’s been around for 150 years, since John Pepper, a British scientist, used a clever illusion to fool a theatre audience into thinking a ghost had appeared on stage.

His trick involved placing a piece of glass at a 45-degree angle above the stage and using it to reflect light from an actor, performing on a board below the stage, towards the audience. To those watching, who could see the reflection of the actor in the angled pane of glass, it looked like a ghost had appeared. 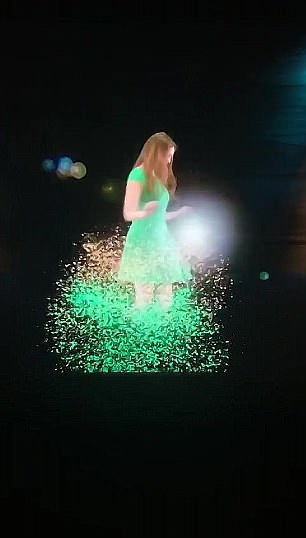 Today, the glass has been replaced with super-thin foil, and lasers and LED lights are used to create a 3D image — but ‘Pepper’s Ghost’, as it was dubbed, is still casting its spell.

‘That’s all a hologram is — an illusion,’ says Harry. ‘The image is projected on to a reflective screen (which lies flush with the floor), then bounced up on to the foil (at a 45-degree angle) and beamed outwards (by lasers) which looks, to the human eye, as if there’s a person there, floating in thin air.’

Today, the screen and foil, lasers and lights are all contained within a ‘holographic box’. These can range from the small (30cm by 60cm) to the very big (30 metres by 10 metres), or the size of a concert stage. The bigger the box, the bigger the hologram inside it.

A hologram is, in essence, a recording. If you want to ‘interact’ with it, the person making the recording has to stay in front of a camera, in a dark room, responding to conversations and questions from the real world, which are transmitted back via a TV screen. This is the only way to create the impression that the hologram is thinking, talking and acting independently — thankfully, unlike robots, artificially intelligent holograms are still a long way off.

More realistically — at least in terms of High Street holograms — boxes are fitted with a database of standard responses, providing information that can be played over and over in a loop.

‘Some of our wealthy clients already use holograms as personal assistants,’ he reveals. ‘They have them on their yachts and private jets. Like Google and Siri (the smartphone-based personal assistant), technology can be used to convert voice commands into digital information, enabling them to “respond” to questions. It won’t be long before we see holograms replacing humans.’

We could soon see holographic bartenders, sales staff in changing rooms and holographic make-up counters, where a hologram ‘you’ could try on virtual products without messing up your face.

While there may be financial benefits of ‘hiring’ digital staff — they’ll never go sick and don’t need lunch breaks — is there a more sinister side to the technology?

A world peopled by holograms is an eerie prospect, and there are rightful concerns about real-life job losses, the risk of technical malfunctions and decreasing human interaction for those to whom shop staff can be something of a lifeline.

But experts say such fears are exaggerated. What’s more, it’s been shown that customers are better at absorbing information from holograms than, say, posters or audio recordings.

Airports with holographic security staff, tasked with crowd control and giving instructions, have reported improved efficiency and reduced queuing times. And it’s not just humans who can be subjected to holographic treatment.

Harry and his team have created holographic jewellery, for display in shops where there are security concerns over showing priceless pieces; holographic fireplaces, for apartments without chimneys; and even holographic pets — from fish in tanks to rabbits and puppies, for allergy-sufferers who adore animals.

‘They don’t make a mess, you don’t have to feed them and they’ll never die,’ says Harry. ‘We brought real-life animals in the studio and recorded them for hours on end.’

Controversially, one of the most popular services his company offers is ‘holographic resurrection’, which involves bringing people back from the dead as holograms.

In 2013, at the behest of his family, they created a hologram of comedian Les Dawson, who died in 1993, for a TV performance.

‘Resurrection works in various ways,’ explains Harry. ‘You can film a body double then use CGI — computer-generated imagery — to put the dead person’s head on that body. Or sometimes there’s enough archive footage of that person which can be manipulated to create new content for the hologram.

‘There is a moral point to consider. Some might think it’s morbid, bringing someone back from the dead. But it means so much to their loved ones. We are delighted to help them feel like they’re connecting again.’

Experts estimate that within a decade we could all be making holographic wills — recording our deathbed wishes in hologram form, to appear as ghostly apparitions to our loved ones after we’re gone.

Just seeing myself in hologram form is enough to make me shudder, let alone the thought of me coming back from the dead.

Two hours after making the recording, Oliver has worked his magic. He plugs a memory stick into the back of a 6ft-holographic box, which comprises a black frame around a transparent window — and Holo-Sarah flickers into view.

The experience of coming face-to-face with yourself is utterly surreal. She — or rather I — has far paler skin than I’d imagined, a rounder face and she really needs to run a brush through that hair.

Unlike looking in a mirror (where your reflection is reversed), I’m seeing myself — for the first time ever — as other people do. And I’m not sure I like it.

Never before have I been so conscious of the way my mouth moves when I talk, how often I twiddle my thumbs and play with my hair — or the wrinkles etched across my forehead (this, explains Harry, is where holographic ‘de-aging’, done digitally on a computer screen, could come in handy).

In full colour 3D, there is absolutely nowhere to hide — all my lumps, bumps and imperfections are on display. I sound strange, too, somehow tinnier and higher-pitched than the voice I hear when I open my mouth. If you, like me, feel uncomfortable watching yourself on video or hearing yourself on an answering machine, a hologram is a thousand times worse.

There is also the cost to consider. Globally, the hologram industry is worth £2.5 billion — but Harry insists household holograms, from fish tanks to personal assistants and the hologram ‘self’ I created, aren’t prohibitively expensive or the preserve of bored billionaires.

‘We’re talking thousands of pounds rather than millions,’ he says, but the exact figure depends on each customer’s requirements.

As for me, I’m not sure I’ll be bringing Holo-Sarah home.

After a few hours in her company, I can’t stand the sight of myself. She looks strange, sounds even stranger — and I’m not sure how my poor husband would cope if two of us turned up at the door.