White House Press Secretary Sarah Sanders nearly lost her composure at Wednesday’s press briefing after a young boy asked a question about the fear that he and his classmates share that they’ll ‘get shot’ at school.

The emotional moment followed months of reports on school shootings, and a movement driven primarily by high school students to try to get their communities and governments to institute protections.

The press secretary called on the Benje Choucroun, a young reporter from TIME for Kids who was dressed in a blue blazer, after a Canadian reporter helped him gain Sanders’ attention during the televised briefing.

Sarah Huckabee Sanders at White House press briefing May 30 2018, where a young boy shared fears of getting shot while attending school

‘One thing that affects my and other students mental health is the worry about the fact that we or our friends could get shot at school,’ Benje said, reading from a sheet of paper.

‘Specifically can you tell me what the administration has done and will do to prevent these senseless tragedies?’ he asked.

Sanders nearly choked up during her response, even as she delivered a business-like answer following a formal briefing where she faced questions about FBI ‘spying,’ Trump’s displeasure at his attorney general, and North Korea.

‘As a kid and certainly as a parent there is nothing could be more terrifying for a kid to go to school and not feel safe so I’m sorry that you feel that way,’ said Sanders, who is a mother and who acknowledged her one-year-old nephew’s birthday at the top of the briefing. 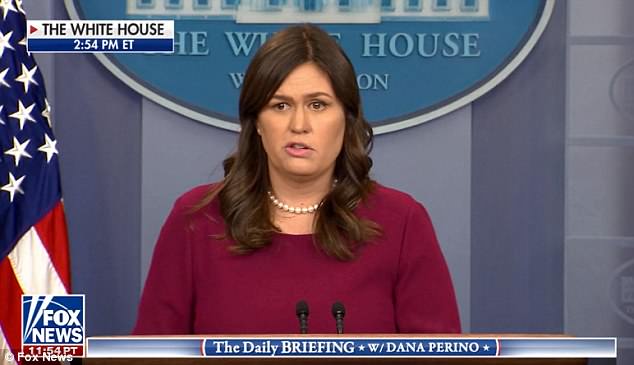 ‘As a kid and certainly as a parent there is nothing could be more terrifying for a kid to go to school and not feel safe so I’m sorry that you feel that way,’ said Sanders 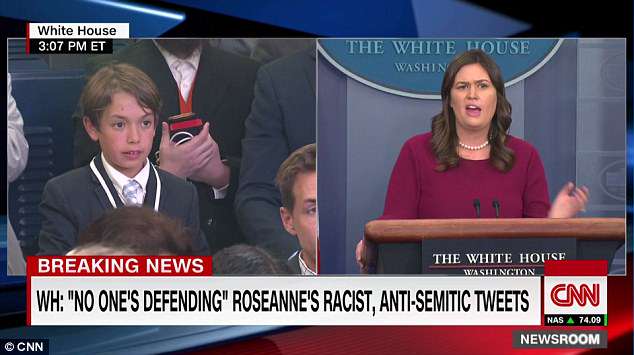 ‘One thing that affects my and other students mental health is the worry about the fact that we or our friends could get shot at school,’ a boy named Benje asked Sarah Sanders at the White House briefing

‘This administration takes it seriously and the school safety commission that the president convened is meeting this week, again an official meeting, to discuss the best ways forward, and how we can do every single thing within our power to protect kids in our schools,’ she said.

‘And to make them feel safe and make their parents feel good about dropping them off.’

Benje said he had just been through a lockdown drill at school.

Schools across the country are working on such precautions, following the latest shooting at Sante Fe High School.

A gunman killed 10 students there earlier this month. Students returned to their school Tuesday for the first time since the tragedy struck. 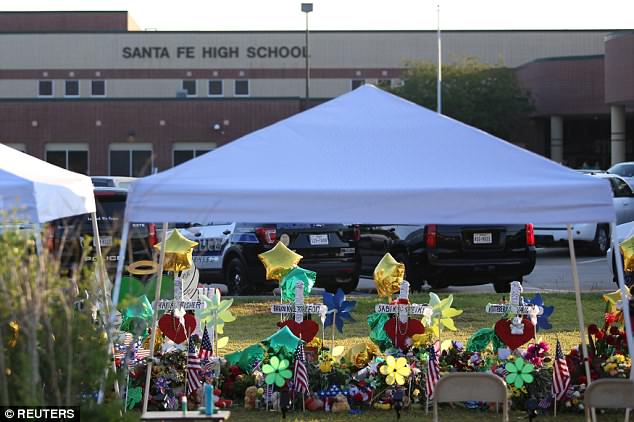 The memorial for victims of the Santa Fe High School shooting lays outside the school as students return on the first day of class since the mass shooting in Santa Fe, Texas, U.S., May 29, 2018

It wasn’t immediately known why the boy was in the briefing room or how he got credentialed to be there, or whether he was at the White House for an unrelated event.

President Trump hosted students from Parkland Florida following an earlier school shooting. He came out for arming teachers, a policy that many teachers unions and groups immediately opposed.

The administration has resisted renewed for gun control, including restoring the assault weapons ban or closing the ‘gun show loophole.’