Sarah Sanders took a subtle shot at the Washington political press on Saturday night as President Donald Trump spoke in Wisconsin, rallying his faithful instead of appearing at the annual White House Correspondents’ Association dinner.

Sanders, the second White House press secretary to serve the 45th president, endured a series of aggressive insults at least year’s dinner in Washington, listening as comedian Michelle Wolf called her a liar and an embarrassment to women.

Trump invited her to the stage in Green Bay after his audience erupted in chants of ‘Sarah! Sarah! Sarah!’ at his first mention of her name.

‘Thanks to all the amazing things you’ve done for this country,’ she said at Trump’s podium. ‘Last year this night I was at a slightly different event. Not quite the best welcome.’ 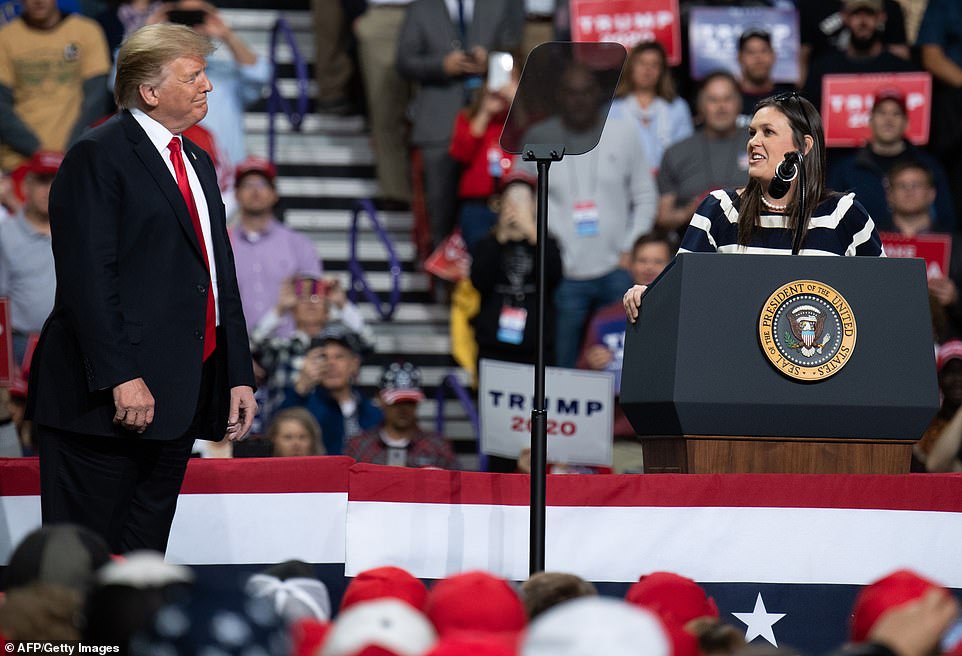 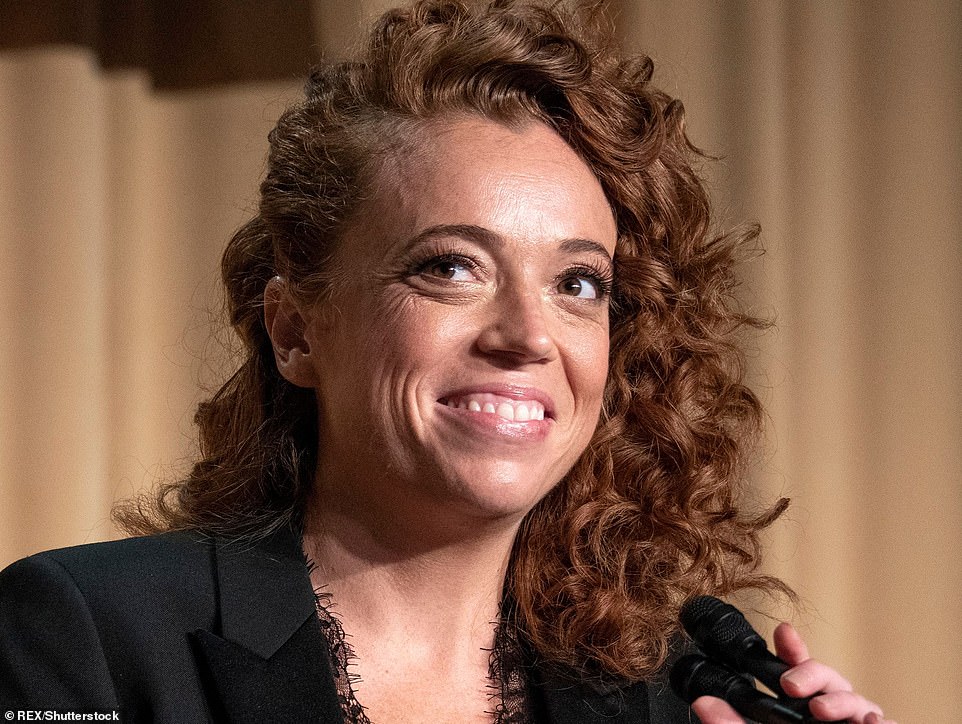 Sanders hasn’t held a press briefing in nearly seven weeks, but on Saturday she spoke to more than 10,000 people in Wisconsin as a skeleton crew of reporters looked on and the rest of the industry boozed and schmoozed back in D.C.

Trump referred to her as ‘the great Sarah Huckabee,’ using her maiden name.

After hearing Sanders rattle off a list of his accomplishments and scorch his detractors, the president re-enacted the most famous moment from his NBC series ‘The Apprentice’ and pretended to fire her in public.

Sanders’ litany of wins seemed aimed at the reporters she corrals daily, a group she has characterized as an unfairly hyper-critical bunch.

‘They’ve questioned him at every step, and he’s proven them wrong every single time because of all of you. Thank you Mr. President for leading our country. Thank you!’ 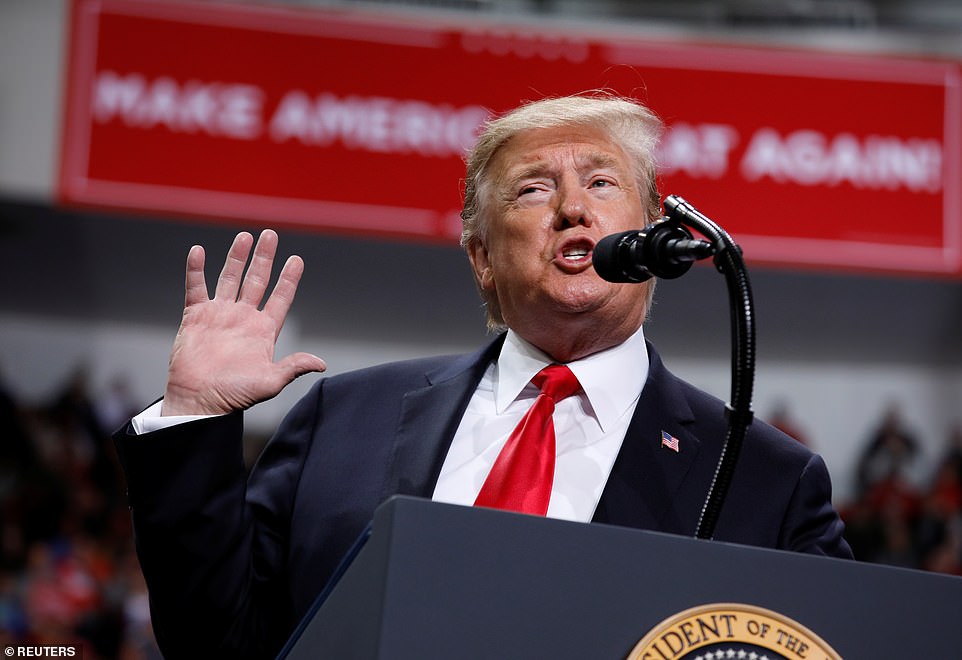 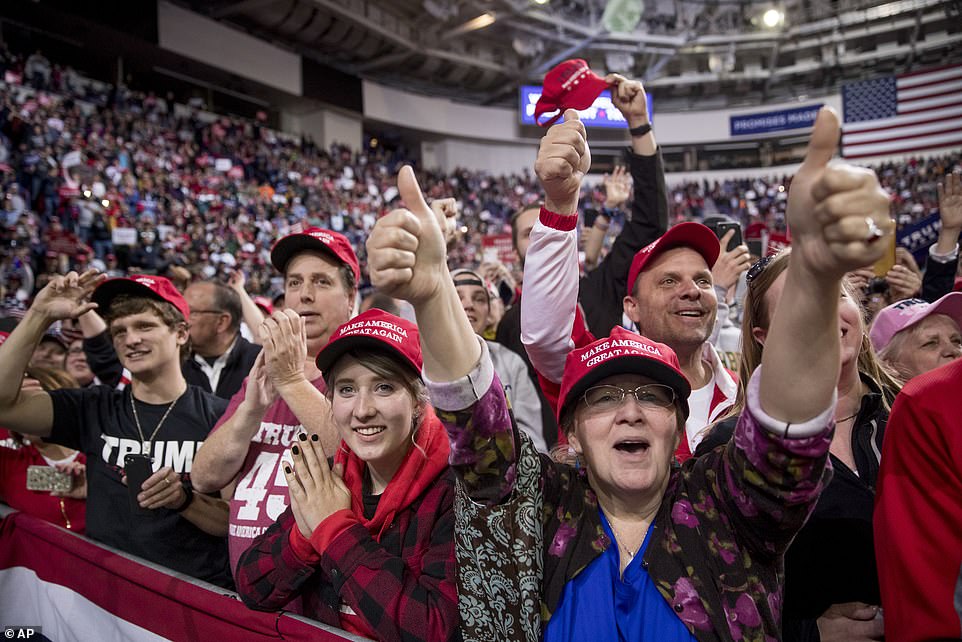 Wolf, the stand-up comic, roasted Sarah at the 2018 dinner with unusual vigor, crossing a line into what many observers saw as cheap-shot territory.

Calling her ‘Aunt Lydia in “The Handmaid’s Tale”,’ Wolf said Sanders was ‘very resourceful, like she burns facts, and then she uses that ash to create a perfect smoky eye.’

‘Like, what’s Uncle Tom but for white women who disappoint other white women? Oh, I know. Ann Coulter.’

Bloomberg News reporter Margaret Talev, then the president of the White House Correspondents’ Association, said afterward that the insult-comic act was ‘not in the spirit’ of the dinner’s goal of celebrating the First Amendment.

Trump has held counter-programming rallies during all three White House Correspondents’ Association dinners during his presidency. The others were held in Michigan and Pennsylvania, both swing states like Wisconsin.

Unlike the past two performances, however, he delivered mostly muted attacks on the news outlets he loves to hate.

He didn’t mention a controversial New York Times editorial cartoon, which the newspaper retracted earlier in the day. It showed him holding a leash and walking a dog whose face was drawn as Israeli Prime Minister Benjamin Netanyahu. 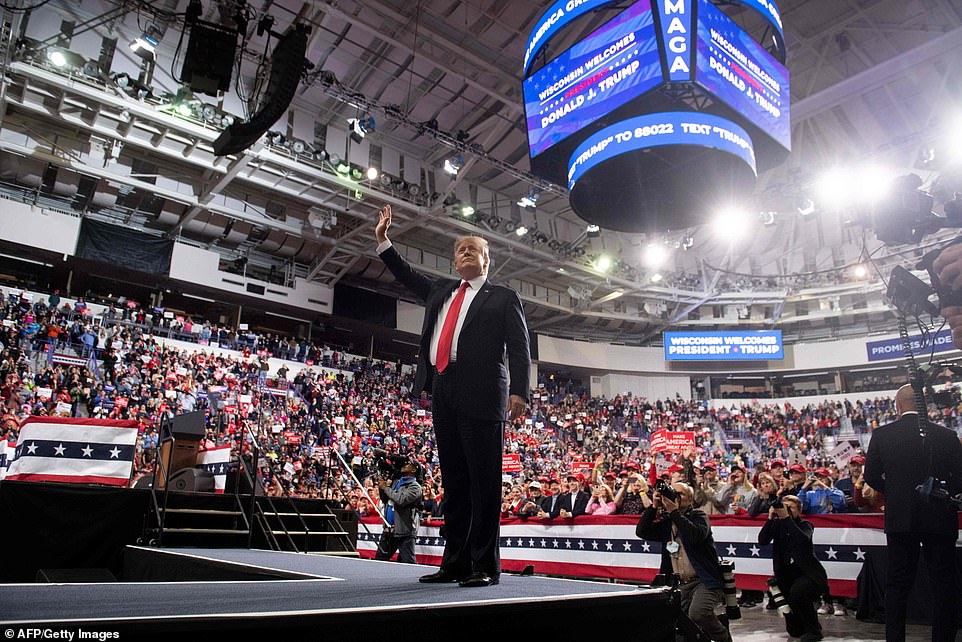 US President Donald Trump waves as he arrives for a Make America Great Again rally in Green Bay, Wisconsin

And he didn’t mention the dinner or the reporters’ association whose annual invitation he has consistently rubbished.

But he couldn’t resist a moment of needling his least favorite cable TV network.

As he rattled off a list of record or near-record unemployment figures, he pointed to the press section and cautioned the audience that he had to parse his words carefully.

‘If I make any misstatement, if I’m off by just a little tiny bit, those people back there will be – headlines!’ he said.

‘I’ll tell you, you know what sucks?’ he asked. ‘Their ratings suck.’

‘The people who get it wrong the most,’ he complained, ‘are the weather forecasters and the political analysts.’

The leadership of the correspondents’ association opted this year to break with tradition and ask a presidential historian, not a comedian, to deliver the keynote dinner speech.

Ron Chernow, who wrote the book that Lin-Manuel Miranda adapted into the ‘Hamilton’ musical, got the honors. 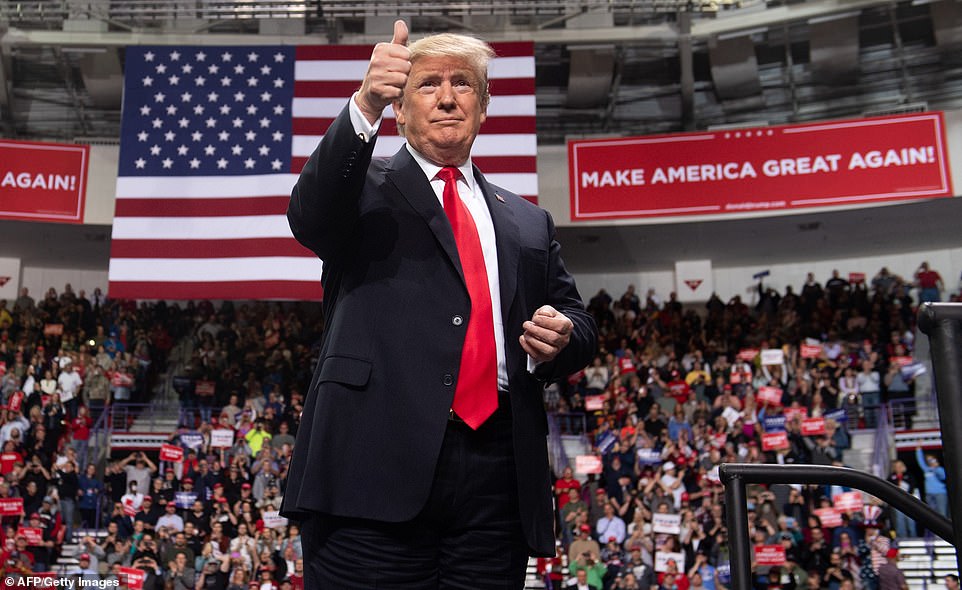 Trump gives a thumbs up during a Make America Great Again rally in Green Bay, Wisconsin on Saturday

Trump’s speech Saturday night was nearly all politics, but he detoured into pop culture long enough to complain about the case of Jussie Smollett.

Smollett, who is black and gay, claimed that he was attacked on a Chicago street by two white men shouting racist and anti-gay slurs, and claiming that Smollett was in ‘MAGA Country’.

‘We may have the greatest theme in the history of politics. It’s called “Make America Great Again.” It’s called MAGA Country,’ Trump said.

‘You know, I didn’t hear that term until that third-rate actor in Chicago went out and he said, “I was beaten up by MAGA Country.” Can you believe it? Now that’s a hate crime right?’

‘He said he was beaten up by MAGA Country,’ Trump said. ‘Turned out to be a total lie.’

After two Nigerian bodybuilders gave sworn testimony that Smollett had paid them to stage the attack as a hoax, the actor was charged with 16 felony counts of filing a false report. Cook County State’s Attorney Kim Foxx later controversially dropped all of the charges.

Referring to what critics call a sweetheart deal that saw a raft of criminal charges vanish into thin air, the president was indignant.

‘That case in Chicago is a disgrace to our nation. Disgrace,’ he said.