SARAH VINE: If Ghislaine Maxwell is found guilty, she has to pay. But this is inhumane

If Ghislaine Maxwell, whose trial begins this week in America, is guilty, she deserves a long stretch. Sex trafficking of any kind, let alone of minors, is repulsive.

If the evidence against her is enough to convince a jury of her guilt, then her victims absolutely deserve justice.

But I must confess that I have some serious misgivings about the process to date. Not least the fact that despite the presumption of innocence being a fundamental part of the law – and a key plank of the UN Declaration of Human Rights – it seems she is being treated as if she’s already been found guilty and is being punished in the most gratuitous of ways.

This much is abundantly clear from today’s MoS exclusive, in which the daughter of disgraced tycoon Robert Maxwell offers an insight into her life in New York’s notorious Metropolitan Detention Center, where she has spent the past 16 months in solitary confinement.

Of course, this isn’t the first we’ve heard of her poor treatment. For months, stories have been circulating.

But this is the first time we’ve heard from her own lips just how bad conditions behind bars have been for her.

Malnutrition, assault, threats, abuse – and a seemingly unrelenting campaign designed to wear her down mentally and physically.

Her eyesight is failing, she is losing her hair and shed a dangerous amount of weight. She has been, to all intents and purposes, treated like a convicted criminal.

Indeed, some might argue worse than a convicted criminal – certainly by British standards.

And what’s really extraordinary is that the Americans aren’t denying it. If anything, the presiding judge seems to think this is a perfectly normal way for a civilised country to treat a foreign national who has not, as yet, been found guilty of a single crime

This is not only unconstitutional, it is also illogical. After all, Maxwell is not a live threat to others.

Her crimes, if they are proven, are historical.

It is not as though, were she detained in a less high-security environment, or granted bail, she would cause harm to others.

But I suspect that’s not really why she’s stuck in a 10ft by 12ft prison cell with an open sewer for a toilet and a rat for company.

She’s there because of Jeffrey Epstein, and the mess the American authorities made failing to bring this convicted paedophile to justice.

She is being made to pay not only for his wickedness, but for the embarrassment of the muppets who allowed him to take his own life – or be murdered – in jail, and thus evade proper justice.

Perhaps the US authorities are hoping that, by undermining her health and morale in this way, she will eventually – like so many others in her situation – give in and submit to a plea bargain, preferring to admit culpability without trial in exchange for a reduced sentence.

That does not appear to be the case.

And it may even be, as her lawyers will argue, that her mistreatment combined with the unrestricted – and hostile – reporting of her case in the US media means that no jury can be convened that is not already prejudiced against her

If that happens, then her alleged victims might never receive proper justice. Which would itself a huge injustice.

Don’t get me wrong: I’ve never met the woman, never intend to and have no reason to defend her. If she is guilty she must pay.

But the bottom line is this: until any or all of the charges against her are proven she deserves – like anyone else – to be treated with respect and humanity.

That America, the so-called Land of the Free, should have failed so dismally in that respect, is something that should concern us all.

It’s about the poppy NOT you, Meghan

The Duchess of Sussex’s choice of a low-cut, full-length, thigh-split scarlet Carolina Herrera gown to attend a gala in New York in aid of war veterans has won praise from fashionistas. But in terms of the occasion, it could hardly have been more inappropriate.

For a start, the colour eclipsed the red of the poppy on her breast; and secondly, you don’t dress like a diva to an event in honour of the fallen for the simple reason that it’s really not about you. I know that’s a concept the Duchess and Prince Harry struggle with sometimes – but still. 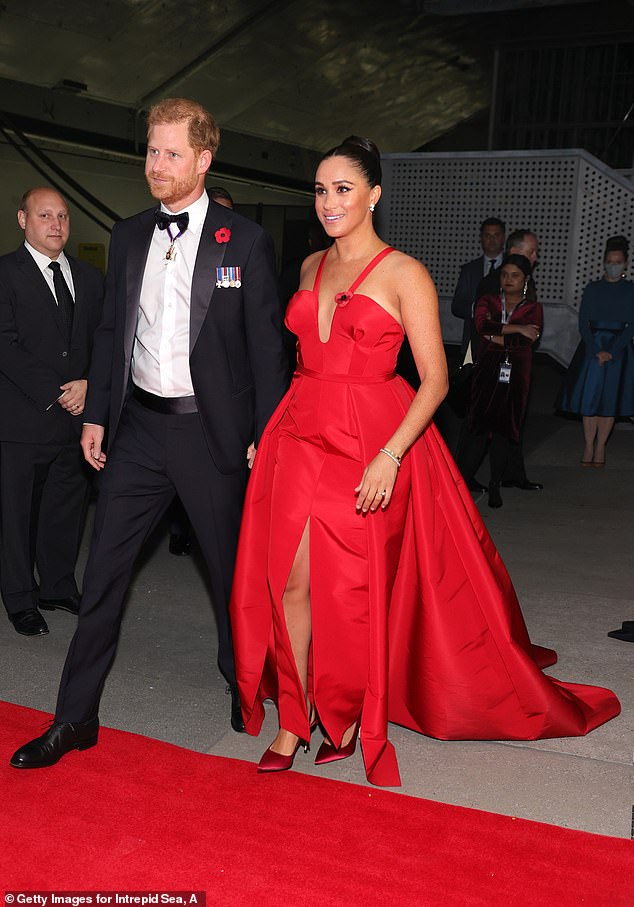 Prince Harry and Meghan Markle, Duke and Duchess of Sussex, arrive at the Intrepid Sea, Air & Space Museum for the Salute to Freedom Gala

It’s clear that France’s refusal to stem the flow of migrants departing its shores is a calculated attempt on behalf of President Macron to make life tricky for his political nemesis, Boris Johnson, while also trying to curry favour with Right-wing voters in the presidential election next year.

But the fact that he is prepared to sacrifice the lives of refugees while turning a blind eye to the criminality of people-smugglers tells us what kind of man he really is: a ruthless moral bankrupt who will stop at nothing to hold on to power.

Matt Hancock is reportedly in talks for a £100,000 deal to write a memoir of his time in office, detailing his ‘heroic’ hands-on handling of the pandemic. There’s no doubt that ‘hands-on’ and ‘handling’ are two words closely associated with his time in office; whether the rest remains of interest, who can say.

One of the most irritating things about adverts these days are those weedy, warbly versions of popular hits that seem to accompany every scenario, whether it be a car on a forest road – or an alien eating mince pies, as per this year’s John Lewis Christmas ad, which features a breathy version of 80s hit Together In Electric Dreams. The store is now being accused by an ‘alt-folk’ duo from Wells of ‘borrowing the feeling’ of their version of the song.

I can’t bear the ad or the soundtrack – but even by the snowflake standards of modern life, ‘feelings’ are surely not subject to copyright law?

When my daughter was 11 or 12, she and her friends loved nothing more than a trip to Lush to buy glitter bath bombs.

I think I even paid for her to have a birthday party there once. More fool me. Because now it transpires that Lush is flogging chest binders – garments designed to flatten and disguise breasts – in exchange for a £7 donation to a trans outreach organisation.

Now, I’m all in favour of helping trans men get the help they need, but there is something very sinister about a store that is frequented by impressionable young girls promoting a garment whose only function is to mute – and ultimately mutilate – the female form.

I’m a huge Adele fan but even I admit that the hype surrounding her new album – which ‘drops’, as the young people say, on Friday – has been absurdly OTT.

Final straw was footage of her and Oprah, dressed head-to-toe in matching shades of cream and white, looking for all the world as though they were conducting proceedings from some lofty perch in the heavens.

Oprah may be a god in some circles, and there is no doubting that Adele has the voice of an angel, but they are both, nonetheless, ordinary mortals. 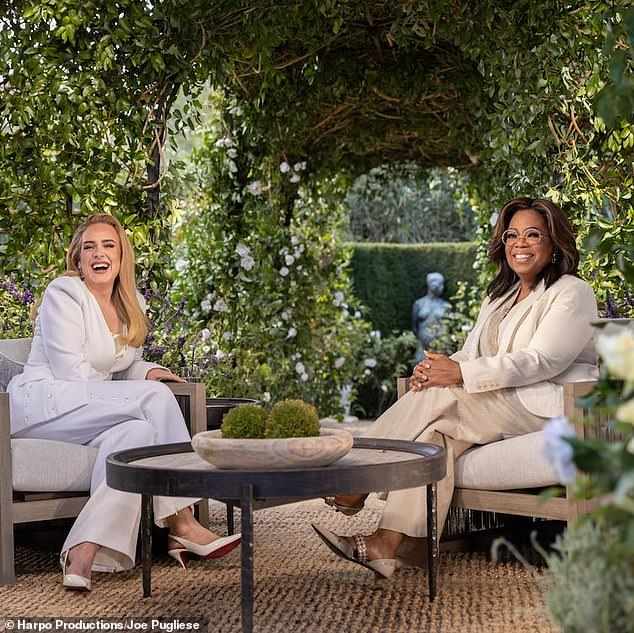 Sarah Vine: I’m a huge Adele fan but even I admit that the hype surrounding her new album – which ‘drops’, as the young people say, on Friday – has been absurdly OTT. Adele pictured with Oprah for upcoming CBS special, Adele One Night Only

It’s so foolish to write off Boris

I read with some interest Petronella Wyatt’s comments on the Prime Minister last week.

In it she mourns for ‘the Boris of yore’, the ‘ebullient, rib-tickling Boris we used to love’ – that is to say the man she had an affair with 20 or so years ago while they were both working at The Spectator magazine (and, of course, while he was married with young children). I too knew that Boris, and I didn’t love him at all. In fact, I always found him rather insufferable – arrogant, a bit lazy, complacent, occasionally cruel – indeed, exactly what you would expect from an entitled Eton-educated toff.

Whatever you think of his current travails – and there is no doubt he faces some serious challenges – Boris 2021 is a much more nuanced and thoughtful individual, humbled and battered by the pandemic, far more conscious of his own failings than the buffoon of old.

He has many enemies, and many who, like Wyatt, are intent on revenge.

But I wouldn’t write him off just yet.

Authorities in Russia are considering banning unvaccinated citizens from purchasing alcohol. If my Russian friends are anything to go by, that should quickly resolve the problem of the country’s low uptake. I wonder what the equivalent would be in Britain: no jab, no cuppa?