SARAH VINE on how she learned what REALLY matters at Christmas

Potatoes. Every year I forget something crucial, so it was that on Christmas Eve, when most sane people are settling into their third eggnog, I was shoulder-to-shoulder with all the other Yuletide inadequates, frantically scrabbling for the last bag of King Edwards in Waitrose.

I had just secured my bounty when the mobile rang. It was my 14-year-old son. ‘Hello,’ I said cheerily. ‘How are things?’

He replied with a howl of anguish. It took me several minutes to establish the precise details of his predicament, but in essence it appeared he had tripped over the Christmas tree and fallen through the plate glass French windows.

I asked him to switch his phone to FaceTime and was confronted with a white-faced child with a huge gash on his shoulder — about 10cm long and deep enough so you could see the bone and tissues. On the same arm, a strip of flesh was hanging, like something out of a horror movie.

It took me several minutes to establish the precise details of his predicament, but in essence it appeared he had tripped over the Christmas tree and fallen through the plate glass French windows (stock image)

I put down the spuds and ran. It took me about ten minutes to get home, by which time he was sitting on the stairs with the front door open, shaking and covered in bloodied kitchen towels.

His lips were blue, and the hall was looking distinctly Quentin Tarantino. Both French door windowpanes were jagged, gaping holes. Carpet, presents, tree were all covered in a fine spattering of blood.

On my dash back I’d managed to call an ambulance. While waiting for it, I remembered a distant first-aid course and did my best to apply pressure to the gaping wounds.

His main concern, bless him, was that I would be cross because of the broken windows and ruined carpet. By the time the ambulance crew arrived the situation was a little more under control. My daughter had mopped up a lot of the blood and Will had calmed down considerably.

In fact, the crew seemed more concerned for my husband, who was gasping for air having sprinted back from the Tube station. Not until they saw the lacerations did they realise we weren’t time-wasters. Their eyes widened, the nurse visibly gagged and not long after we were on our way to A&E.

I won’t bore you with the details of the next seven hours, save to say that we were looked after brilliantly at the hospital by staff who stitched the boy up a treat.

We emerged late into a cold, crisp Christmas Eve, my son excited at the prospect of some thrilling scars with which to wow the girls, already sharing the gruesome pictures on Snapchat.

This time of year seems to always go hand-in-hand with disaster, from exploding ovens to explosive rows (I remember one Vine family Christmas when relations were so bad I actually had to put my father on a plane back to Italy). But even by our standards, this has been rather a shocker. 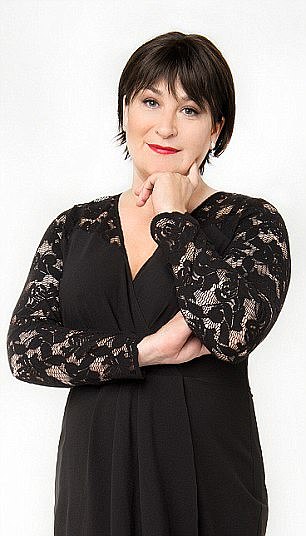 SARAH VINE: Had Will’s Guardian Angel not been paying close attention this Christmas Eve, I could have been facing a very different Christmas from the one I’ve just enjoyed

It’s not just the what-ifs that haunt me. That, had he fallen an inch to the side either way, he could easily have severed a ligament or, much worse, an artery. Or if had I missed his call — as I often do — I might not have got home in time. It’s the fact that, when it comes to Christmas, we really have lost the plot. It has become such a silly, stressful, over-hyped time of year.

We agonise over finding just the right present, sourcing the perfect turkey (bankrupting ourselves in the process), over-eat, over-drink, over-think the whole damn thing.

But at the end of the day, none of it really matters. What’s important are the ones you love, and their health and happiness.

In striving so hard for the material things it becomes all too easy to overlook what’s really important. To take for granted the things that are truly precious.

And life — the life of those we love — is so fragile. It can turn on a sixpence, whether by natural disaster (the terrible tsunami that has claimed so many lives in Indonesia) — or simple accident (tripping over the Christmas tree).

Had Will’s Guardian Angel not been paying close attention this Christmas Eve, I could have been facing a very different Christmas from the one I’ve just enjoyed.

Instead, I had the pleasure of being dragged out of bed at silly o’clock by him as usual, of seeing the smile on his face as he unwrapped his presents, of making him pigs in blankets and scrambled eggs for breakfast.

I even rather enjoyed the traditional row between him and his sister over Monopoly.

In fact, I’ve had the best present of all. A truly special Christmas Day, one with real meaning — and full of gratitude for my great good fortune in life.

A transgender Bond? It’s a mission too far 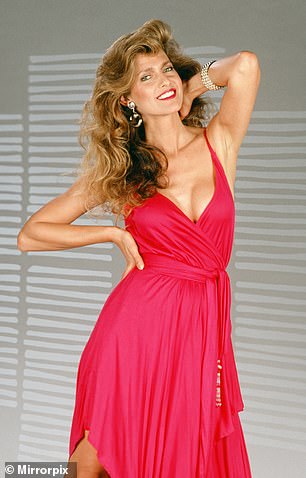 Caroline Cossey, pictured, born male, memorably appeared in For Your Eyes Only in 1981

Actor Dominic West, in a barely concealed bid no doubt to ingratiate himself with the new Equality mafia in Hollywood, has suggested that the next James Bond should be transgender.

I have no problem whatsoever with the notion of a transgender spy (or indeed Bond girl — Caroline Cossey, pictured, born male, memorably appeared in For Your Eyes Only in 1981).

But what I don’t understand is why there’s so much fuss over James Bond. 007 is the literary creation of one man, Ian Fleming. His personality is that of an unreconstructed post-war male, a womanising, show-off daredevil with more than a streak of chauvinism about him.

Yes, he’s a relic of a bygone age, but so are countless much-loved literary characters. You can’t suddenly reinvent them all for these post-PC times.

What next, Lady Macbeth re-cast as a #MeToo campaigner, or Heathcliff as a stay-at-home dad?

By all means let’s create new icons that better reflect our times. But can we please leave the classics alone, and enjoy them for what they are, rather than what we think they ought to be?

What bargains did Kate buy?

It’s a question that threatens to divide the nation almost as much as Leave or Remain. In the great War of the Windsors, are you Team Kate or Team Meghan?

I wasn’t quite sure, to begin with. After all, I love an outsider and Meghan has come an impressively long way from her American roots. But there has always been something just a little too perfect about her that makes me wonder how much is engineered for the cameras.

That is definitely not true of Kate. What you see is what you get with the Duchess of Cambridge. Witness her last-minute, Christmas shopping trip to budget superstore The Range, just outside King’s Lynn, Norfolk, to stock up on cheap and cheerful stocking fillers. The future Queen, queueing at the tills like anyone else.

I wonder what she bought. A Grumpy In A Jumpy knitted bear cushion (£7.99) for Prince Philip? A Fairytale Princess Classic Doll and Horse Playset (£10.99) for Anne? The Balmoral Cushion (£6.99) for the Queen?

And for her beloved brother-in-law Harry and his lovely bride? No better gift, surely, than the Warm Happy Ending Plaque with the charming message: ‘Christmas is the warm happy ending to our family’s story each year.’ A snip at £1.13 — now reduced to 76p. It’s the thought that counts.

While her husband was the President of the U.S., Michelle Obama (pictured) was the model of the dutiful political wife. But now that she is once again a free woman, we are starting to see a glimpse of the real Michelle — and it’s rather outrageous, thigh-high glittery Balenciaga boots and all.

Makes you wonder what other political spouses would be like if unshackled from the constraints of power. Philip May in leather trousers, anyone? 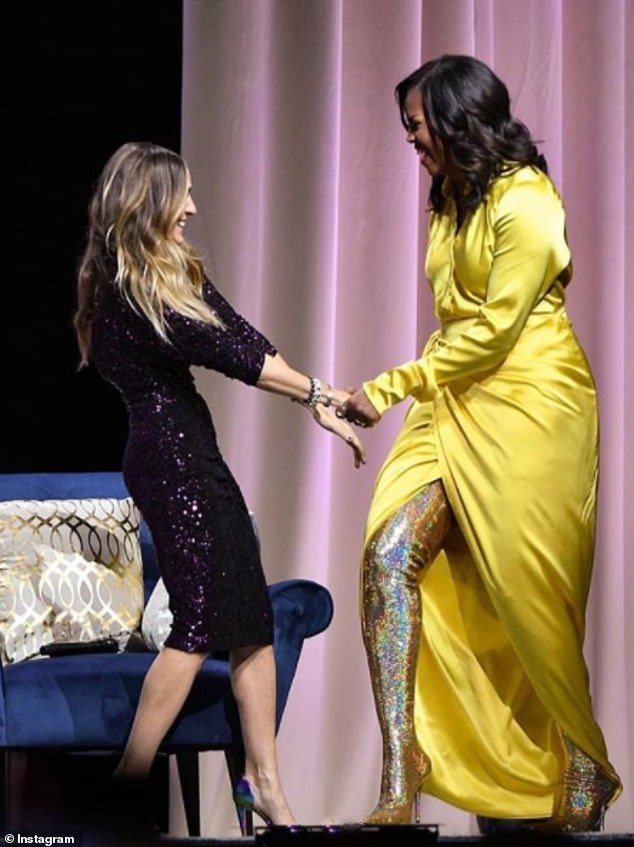 While her husband was the President of the U.S., Michelle Obama (pictured) was the model of the dutiful political wife

Keira Knightley has detailed how she was diagnosed with PTSD at the age of 22 as a result of her early rise to fame and the accompanying Press attention.

Tough, I’ll grant you; but however much of a double-edged sword fame can be, surely in the long run it’s better than stacking shelves in a supermarket?

Today is officially my favourite day of the entire year: presents done, food cooked and eaten, family comatose — and best of all a full 364 days until I have to do it all over again!