SARAH VINE: Why do the rights of one transgender pupil trump the rest of the school’s students?

After I wrote about the madness of gender-neutral toilets in last week’s Mail, I received a truly extraordinary email.

It was from a woman whose daughter is around the same age as my own (15/16) and who, like her, attends an all-girls’ school in a busy metropolitan area.

The end of the summer term had, she explained, seen the school welcome a new girl who, it quickly transpired, was not only a rather troubled individual with a history of self-harm and drug use, but also biologically male.

This child, now self-identifying as female, was to be treated as a girl, according to their wishes, and in all aspects of school life allowed access to female-only areas, including loos and changing rooms.

Not only did the pupils and staff have no say in the matter — the decision had been taken by the school’s senior leadership team — any suggestion that there might be anything even vaguely untoward about this arrangement was met with deep disapproval and, of course, accusations of discrimination.

Doubtless this was done to protect the rights and privacy of the child involved. But what of the rights of an entire year group of teenage girls not to be watched by someone who is biologically a member of the opposite sex in the changing rooms?

Parents weren’t notified of the circumstances surrounding the new arrival. No letter of explanation, no consultation, no attempt whatsoever to enlist their views.

Doubtless this was done to protect the rights and privacy of the child involved. But what of the rights of an entire year group of teenage girls not to be watched by someone who is biologically a member of the opposite sex in the changing rooms?

Do they really not matter at all?

There are many reasons why parents such as myself send their daughters to an all-girls’ school.

For me, it’s not just that girls often thrive better academically in single-sex environments; it’s also that — and this is especially true in urban areas — an all-girls environment offers a buffer from the distractions and, in some cases, unwanted intrusions of male attention.

But for some parents, from certain religious backgrounds especially, it’s more fundamental.

As my reader explained, many of the girls at the school were children of observant Muslim families. How would they square that with the knowledge that their daughters might be getting ready for PE alongside a biological male?

As a snapshot of where our PC obsession is leading, this case is quite illustrative. Here is one child — one single child — whose needs have been prioritised over those of an entire school. Under such circumstances, it’s hard not to feel that common sense is losing the fight. 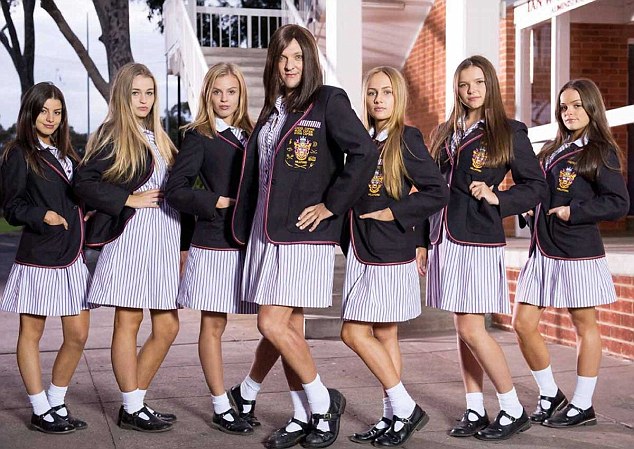 Not only did the pupils and staff have no say in the matter — the decision had been taken by the school’s senior leadership team — any suggestion that there might be anything even vaguely untoward about this arrangement was met with deep disapproval and, of course, accusations of discrimination (Pictured Ja’mie: Private School Girl)

As my reader said, the parents of this school are not a bad bunch. Certainly not bigots of the kind who would condemn a person with gender dysphoria to a life of misery.

But tell them that they must change their way of life and beliefs to satisfy the needs of a tiny minority, and they start to feel a little uneasy. Test their tolerance to beyond the point of reason, and they will get upset.

This is how cultural divisions develop and deepen, and this is exactly what is happening on this issue of gender neutrality.

Because there is little or no tolerance or scope for compromise on the part of the campaigners; they simply cry bigot the second anyone questions their dogma.

And people who would otherwise be very sympathetic find themselves becoming less and less well-disposed.

Despite what Twitter’s professionally offended would have you believe, British people are naturally open-minded.

We rub along very well with other cultures and traditions. But challenge our values of common sense and, make no mistake, we will push back.

Quite simply, no teenage girl in Britain should be forced to undress in front of someone who is biologically a boy. We are a nation with a proud tradition of women’s rights — and no creed or cult, however fashionable, is going to undermine that.

Another year, another series of Bake Off.

What was a quirky but deadly serious show about baking is now little more than a vehicle for finding the next Nadiya Hussain.

Contestants seem to be chosen as much for their Instagram appeal as their talent in the kitchen.

Take Manon Lagreve, 26, who began a baking blog after moving to the UK from Brittany.

All cherry and very little cake is the phrase that springs to mind.

Question: why is the BBC paying upwards of £5,000 to fly the ghastly Shirley Ballas, judge of Strictly Come Dancing, and her pampered pooch Charlie business class to London?

One assumes that’s the case after she tweeted a picture of Charlie enjoying the sort of creature comforts most licence-payers can only dream of.

I can’t think of any other public sector worker who gets treated in such an extravagant way.

What makes her so special (apart from a shameless talent for self-promotion, that is)?

If you’ve ever wondered how a UK under Jeremy Corbyn would fare economically, consider the national wage in Venezuela.

There, the man who presides over Corbyn’s ‘socialist dream’, Nicolas Maduro, has just lopped five zeros off his country’s currency, the Bolivar, in a desperate attempt to tackle hyperinflation.

At the same time, he’s announced a rise in the minimum wage — by 34 times its current level. Unfortunately for the poor of Venezuela, 34 times nothing is still nothing.

I can’t see what’s wrong with the staff at Epsom A&E keeping a Burmese cat to ward off mice and other vermin. Apparently the trust has gone ‘nuts’ over health and safety risks. But if Monty — as he’s known — is up to date with his jabs, he’s probably a damn sight more hygienic than half the humans who turn up on your average Saturday night.

The situation in our prisons doesn’t surprise me.

When my husband became Justice Secretary in 2015, he was utterly horrified (and I mean utterly: he would return home from prison visits ashen-faced) by what he saw as a system on the verge of collapse.

Which is why he expended a lot of time and energy putting together a bold plan. But then the EU referendum happened and things got rather sidelined.

Yet it’s probably still here, mouldering away in the garage. I can dig it out if anyone’s interested . . .

I yield to no one in my admiration for breastfeeding mothers, but even I think that doing it in a swimming pool is a bit, well, weird.

So I rather agree with staff at Dimensions leisure centre, Stoke, who upset two mothers by asking them to refrain.

Breast milk is a bodily fluid and really has no place in a communal pool.

Flying into a rage

How little tolerance people have these days for even the tiniest technical glitch.

This week’s meltdown after Gatwick’s departure screens broke down and staff had to resort to writing information on a white board is a classic case in point.

People were in hysterics, with one complaining: ‘It was hard to see if you weren’t close to the board.’

Just another example of how technology makes idiots of us all.

The case of Asia Argento, the Italian actress who along with others has accused Harvey Weinstein of historical sexual assault — and who now finds herself embroiled in a sex scandal of her own — is a perfect illustration of everything that’s wrong about the #MeToo movement.

Argento has since issued a firm denial of the claims against her, but in essence she stands accused of sexually assaulting a young male actor called Jimmy Bennett.

At the time of the alleged attack he was 17 — and therefore underage. The claim is that she paid him off in an out-of-court settlement to the tune of £295,000.

Argento has seemingly gone from victim to villainess in the time it takes to make a coffee.

Now, it may well be that she is in the wrong. But until the facts can be properly examined in a neutral setting we simply have no way of knowing.

When people — male or female — stand accused of heinous crimes, they should not be judged until due process has run its course.