An SAS hero of the Iranian Embassy siege has revealed how the raid nearly turned into a bloodbath when a terrorist disguised as a hostage tried to let off an explosive.

Warrant Officer Ian White was one of the 32 commandos who famously stormed the building in London to bring an end to the six day hostage siege in 1980.

As he helped evacuate all 25 hostages he noticed one of the terrorists trying to disguise himself as a civilian – while holding a live hand grenade.

Thirty-two commandos famously stormed the building in London, pictured, to bring an end to the six day hostage siege in 1980 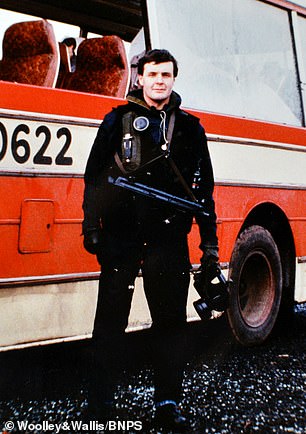 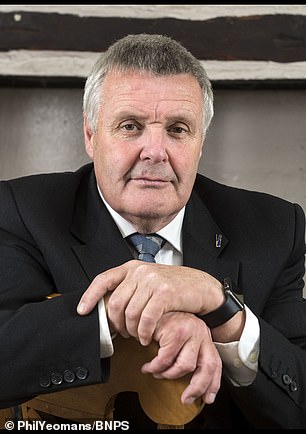 Warrant Officer Ian White, pictured left in 1980 and pictured right today, was one of the 32 commandos who famously stormed the building in London 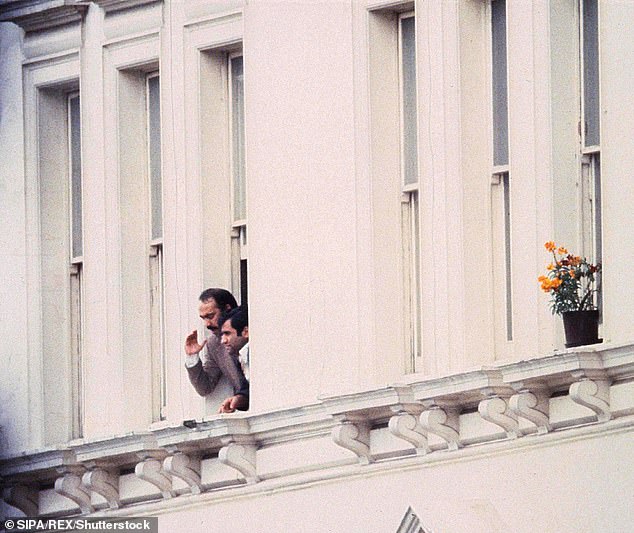 Having taken hostages, the terrorists demanded the release of prisoners in Iran and safe passage out of Britain 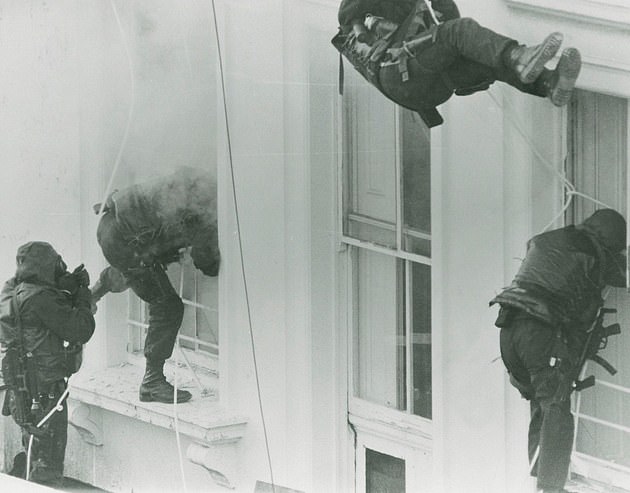 The SAS, pictured storming the embassy,  rehearsed their hostage-release tactics at the full-size mock-up of the site that had been built at their temporary base in Regent’s Park Barracks

Unable to get a shot off due to the innocent civilians in the way, he shouted a warning to a colleague at the foot of the stairs who was receiving the hostages.

Speaking ahead of the event’s 40th anniversary, WO White, now aged 64, said: ‘I grabbed this person and turned him around and sent him down the stairs when I realised it was a terrorist and he had a grenade.

‘I looked over the balcony which over looked the main staircase and I shouted to the team below the words ‘terrorist’ and ‘grenade’.

‘Luckily by the time he got down he was taken care of. He was met by a hail of bullets before he could release his grenade. If it had gone off we would have lost a lot of the hostages.’

After the legendary 17 minute mission that saw all the hostages rescued alive and five of the six Arab terrorists killed, the commandos returned to their base next door.

WO White said: ‘We were met by our police liaison officer who was still there and he was gobsmacked because the first thing one of us said to him was ‘who won the snooker’.’

During the time the 50 SAS men spent holed up next door waiting for orders to go they eased the boredom by watching the 1980 world championship snooker final.

The gripping match between Cliff Thorburn and Alex Higgins was so engrossing that when live coverage was cut for breaking news of the SAS raid the BBC was deluged with complaints.

The six gunmen stormed into the embassy in South Kensington on April 30, 1980, to highlight the persecution of Arabs in Iran’s Khuzestan region.

Iraqi leader Saddam Hussein supported the attack as he believed it would help him win international backing to invade Iran. 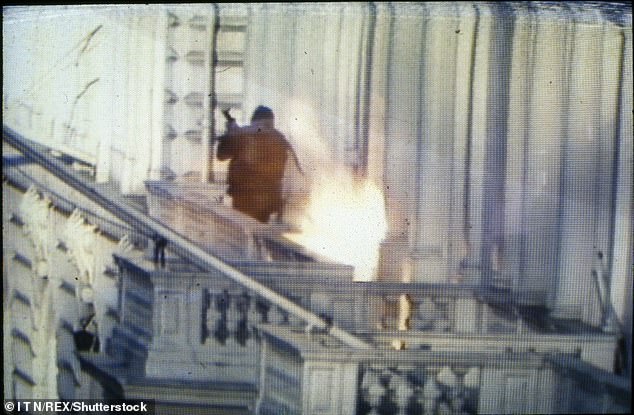 The six gunmen stormed into the embassy in South Kensington on April 30, 1980, to highlight the persecution of Arabs in Iran’s Khuzestan region 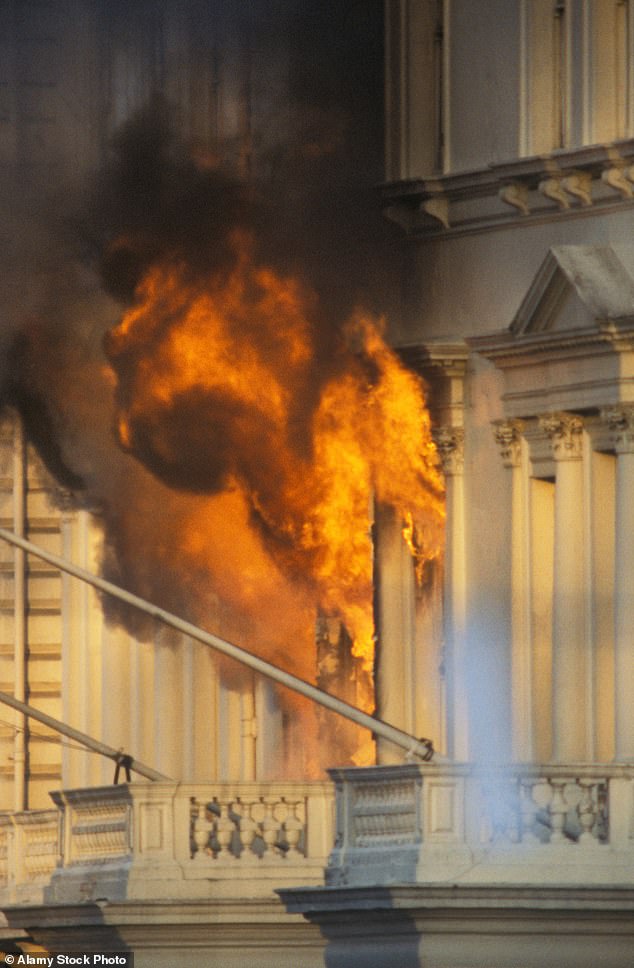 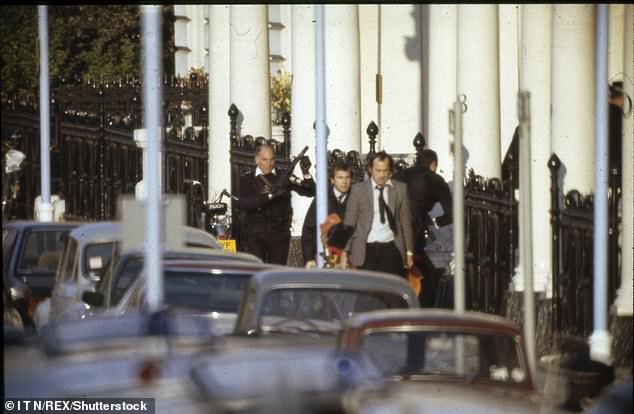 The legendary 17 minute mission saw all the hostages rescued alive, pictured, and five of the six Arab terrorists killed

Having taken hostages, the terrorists demanded the release of prisoners in Iran and safe passage out of Britain.

Over 140 miles away in Hereford – the home of the SAS – WO White’s pager activated and he was called in for an emergency briefing on the developing situation.

Two anti-terrorists teams of 50 men were driven to London and secretly moved in next door on May 1.

Over the next few days the unit gathered intelligence – the embassy’s caretaker revealed the ground floor windows were armoured – and planned for the assault.

The commandos were each given a layout of three floors of the embassy and the location of the hostages and terrorists.

The hostages were marked as ‘X’. Two stick-men figures represented PC Trevor Lock, who was tasked with guarding the embassy, and the most senior diplomat in charge who had been injured in trying to escape.

The seriousness of the situation escalated after the execution of the embassy’s chief press officer, Abbas Lavasani, at 1.45pm on May 5.

WO White said: ‘We waited, the plans got formulated and then the first body appeared and that rocked everything.

‘We were stood by as the negotiations were getting terse. The negotiations got to the stage where the terrorists said they were going to kill more people.

‘We knew then there was only gong to be one end to the situation.

‘About 30 minutes before the assault we took up our positions.’ 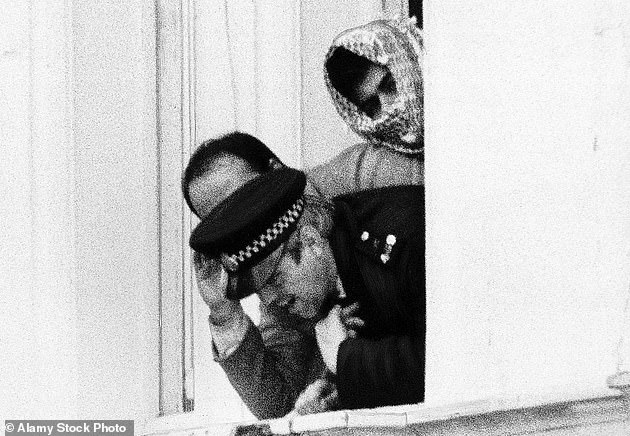 A police officer leans out of the window with two terrorists on the fifth day of the siege, pictured 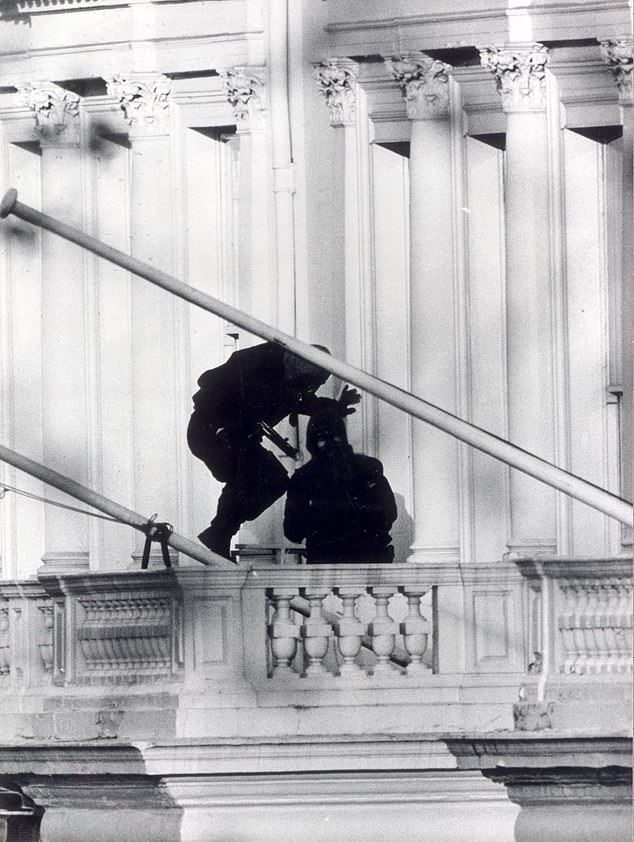 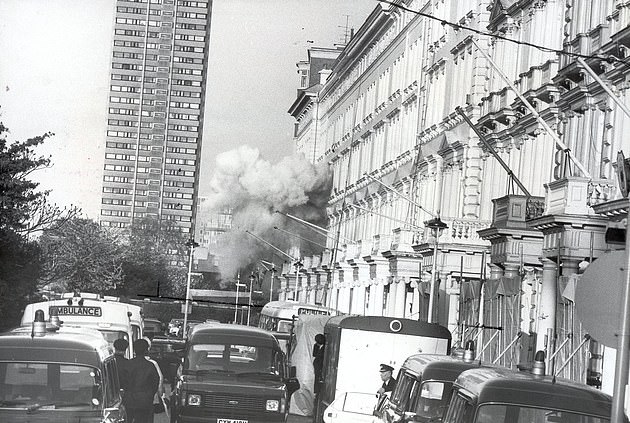 Outside, watched by millions on TV, SAS soldiers Mel Parry and John McAleese move on to the balcony carrying explosives attached to a frame and place it against the window of the office

WO White’s assault team were on the roof above a lightwell while another squad of the black-clad commandos gathered on the balcony at the front, in view of the TV cameras.

When the order came to ‘go’ an explosive device that had already been lowered down the lightwell went off.

WO White scrambled down on a caving ladder and entered the building on the fourth floor. He and his team then had the task of clearing all the rooms on the third floor.

He said: ‘Our weapons were in front of us and every door we came to we forced it open, threw flash bangs (stun grenades) in and went straight in behind it and cleared the room. We cleared our floor very rapidly and there was nothing there.

‘We weren’t required to fire any shots.’

As WO White led the way to the second floor he was almost killed by friendly fire. He was about to step off the last stair and enter the corridor when an experienced colleague being pulled him back.

He said: ‘Another guy on the second floor put a clearing burst of fire down the corridor. If I had taken that step I would have become a casualty. I still think to this day what if I had stepped out.

‘Then we started to move the hostages down from the second floor.

‘I don’t know the name of the terrorist who I passed down the stairs. I don’t know any of their names. Why would I retain that information?

‘The job was not about the SAS it was about making sure hostages survived.

‘We then got the call to evacuate as the building was on fire.’

After the raid the unit was taken to Regents Park Barracks for a debrief and to meet the Prime Minister.

Margaret and Denis Thatcher walked in just as the BBC News came on.

Ian, who lives in Wiltshire, said: ‘Beer was passed around. Somebody got hold of a TV and we were on the news. Then Margaret and Denis Thatcher arrived.

‘She had this wonderfully coiffured hair-do and she sat down right in front of the TV and our sniper commander shouted out from the back ‘move you effing head Maggie’.

‘Give the lady her due, she just looked back and said sorry and moved out of the way.’

WO White joined the army aged 17 in 1972 and served in the 17th/21st Lancers, stationed in Germany and Northern Ireland.

In 1978 he applied join the SAS and was successful at his first attempt.

He went on to serve in the Falklands and left the SAS in 1985 and retired from the military 10 years later.

He worked as a residential carer at a special needs school in Hampshire before he retired two years ago.

The Iranian embassy siege: The day the SAS emerged from the shadows

The siege began when a group of six gunmen stormed into the Iranian embassy in South Kensington, London, on April 30th 1980.

They took mostly embassy staff hostage but among them was BBC sound recordist Sim Harris who was at the embassy to get a visa.

PC Trevor Locke, a member of the diplomatic protection squad and on duty at the building, was also among those held at gunpoint.

The terrorists demanded the release of prisoners in Khuzestan Province in southern Iran during a series of tense negotiations with the police who sealed off the embassy and surrounding streets. The gunmen also demanded safe passage out of the Britain.

After becoming frustrated with the lack of progress over five days they shot one of the hostages and threw his body out of the embassy.

The death was the signal for the SAS – motto Who Dares Wins – to be sent in.

The SAS teams, who had arrived secretly in London from their Hereford base, were given permission by Prime Minister Margaret Thatcher to carry out a rescue mission given the code name Operation Nimrod.

On the evening of May 5th TV news cut into normal programming to broadcast the beginning of the end of the siege as the SAS soldiers all clad in black abseiled down the front of the building.

Millions watched in awe as they tossed stun grenades into the building to begin their assault.

BBC cameraman Sim Harris was captured scurrying to safety, jumping over a balcony, while smoke billowed from the building after a curtain caught fire.

What was unseen by cameras were the other teams – including Horsfall and Firmin – sweeping through the building in a race to free the hostages before they were shot.

The raid lasted just 17 minutes and all but one of the six gunmen were shot and killed.

A second hostage was shot dead by the gunmen and two others seriously wounded.

The televised raid was the first time the British public had ever seen the Special Forces soldiers in action and elevated them to superstar status.

Fawsi Najad, the surviving gunman, was jailed for life and freed in 2008 after serving 27 years. He was granted leave to remain in the UK.