These satellite images show just how massive the power outages are in Puerto Rico after Hurricane Maria wreaked havoc on the island and plunged millions into darkness.

The images, from a National Oceanic and Atmospheric Administration satellite, show how vastly different the power supply was on July 24 compared to Monday.

San Juan and other cities barely have any light, while the island of Vieques is covered in complete darkness.

Most of Puerto Rico has been without lights or air conditioning since Maria wiped out generators when it made landfall last Wednesday.

The images, from a National Oceanic and Atmospheric Administration satellite, show how vastly different the power supply was on July 24 compared to Monday

More than 3.4 million US citizens still lack adequate food, water and fuel five days after Maria pounded the island as a Category 4 hurricane.

San Juan’s airport is finally up and running with nearly 100 arrivals and departures daily, including military and relief operations as well as more than a dozen commercial passenger flights.

The Federal Aviation Administration is taking reservations for arrival and departure slots to manage space at the airport and safely separate aircraft in the air.

Maria destroyed or disabled a number of essential radar, navigation and communication systems, so the FAA has been bringing in replacements by air and sea, and technicians are working now to get them working. 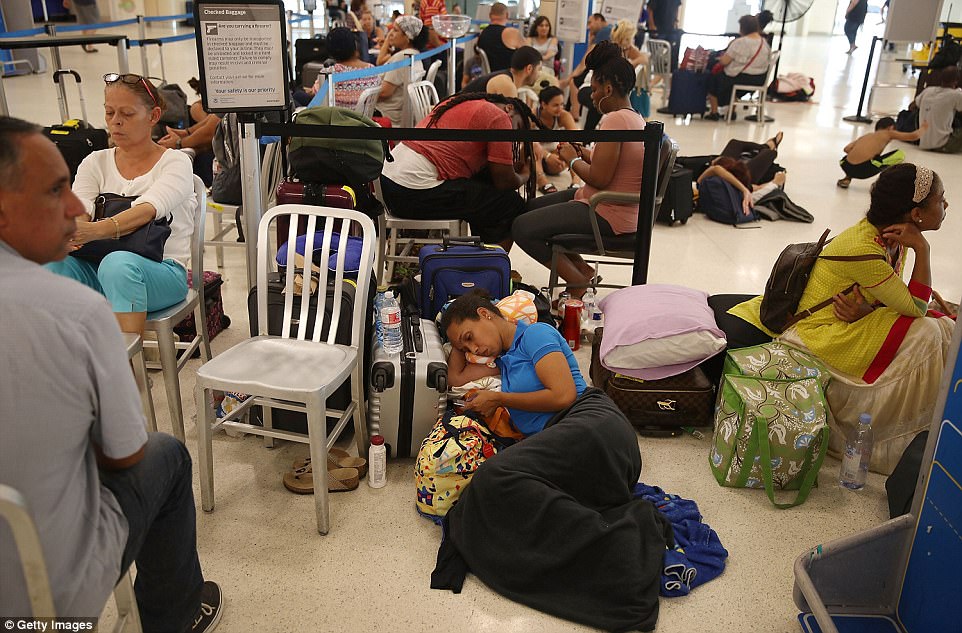 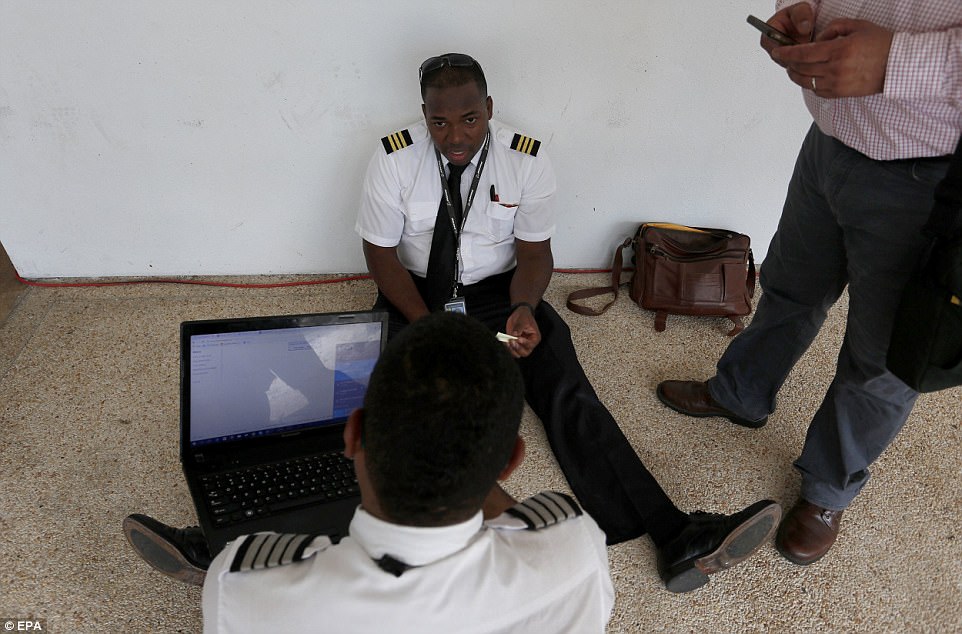 Personnel of an airline work on the floor as a passenger tries to get a ticket to leave the island at International Airport Luis Munoz Marin in Carolina, near San Juan, Puerto Rico 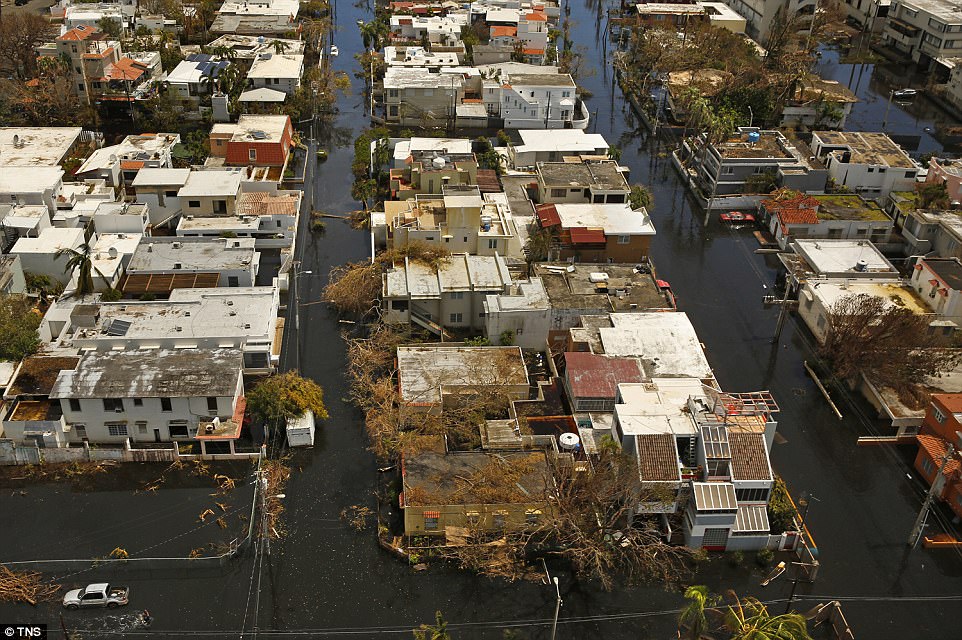 Nearly one week after hurricane Maria devastated the island of Puerto Rico, residents are still trying to get the basics of food, water, gas, and money from banks 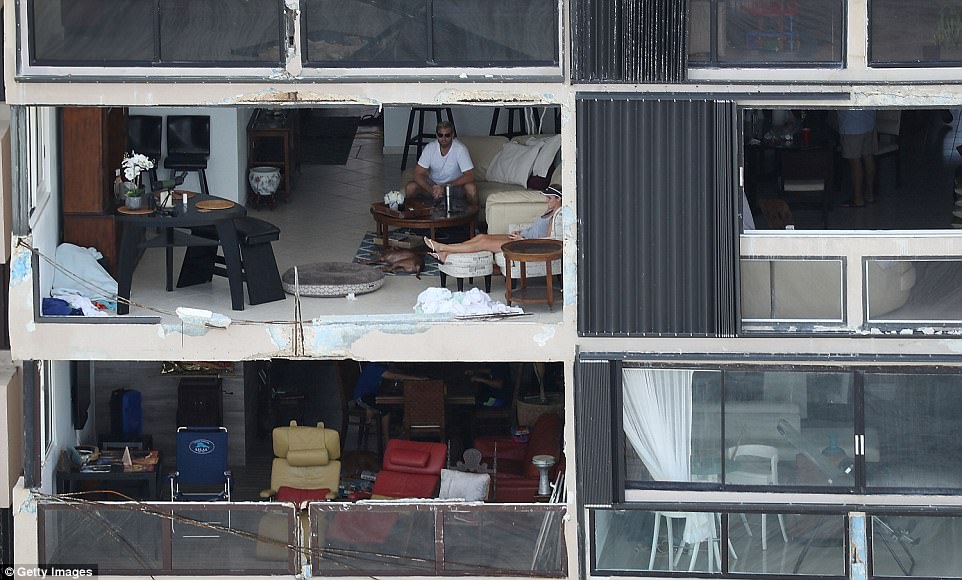 People sit in their apartment on Monday after the window was blown out by the winds of Hurricane Maria as it passed through San Juan, Puerto Rico 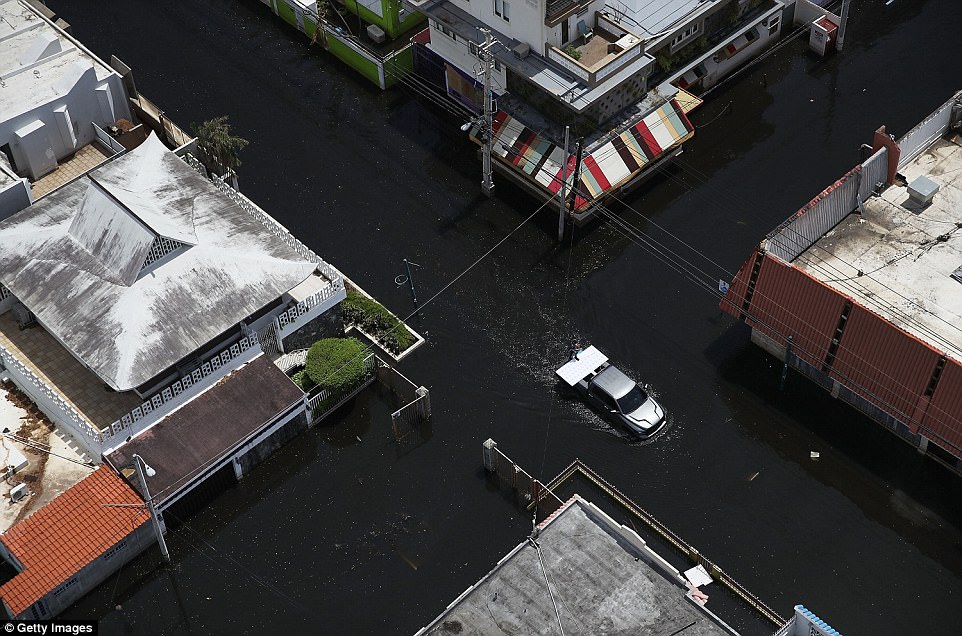 Maria left widespread damage across Puerto Rico, with virtually the whole island without power or cell service and many streets still flooded 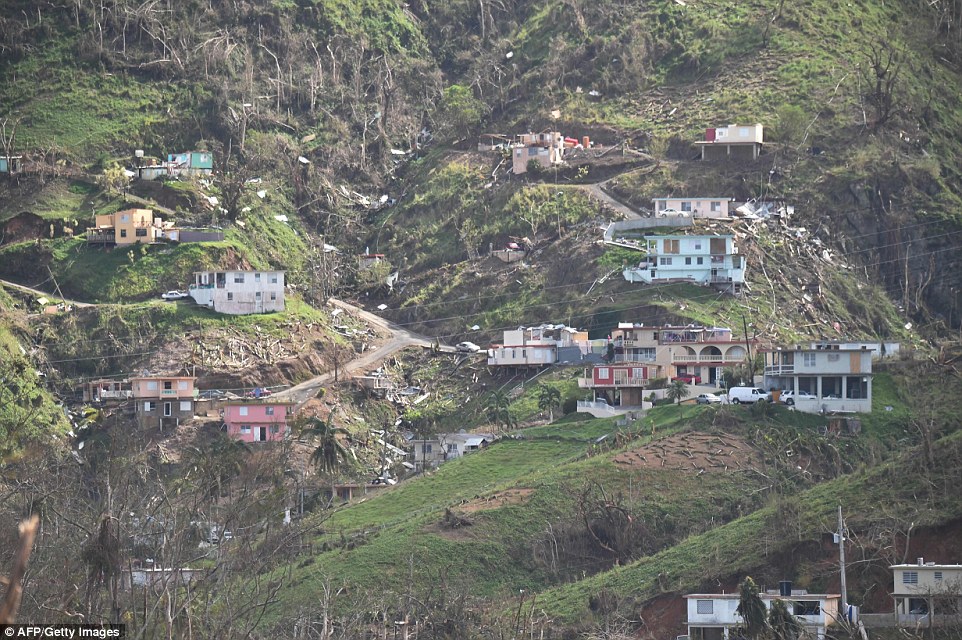 Damaged homes and vegetation during the passage of Hurricane Maria, are viewed on a mountain southwest of San Juan

Hundreds of stranded tourists and Puerto Ricans had filled the sweltering halls of San Juan International Airport on Monday anxious for a seat on one of the few flights out.

Some waiting in the sweltering terminals said they had been stranded for days with limited food and no water.

It was revealed on Tuesday that the federal government will pick up 100 percent of the costs of debris removal and other emergency assistance to Puerto Rico after Hurricane Maria.

President Donald Trump made the change Tuesday as part of an amendment to his earlier disaster declaration authorizing federal aid. US states and territories typically cover 25 percent of the costs, with the federal government paying the remaining 75 percent.

But the island’s government is so strapped for cash that Puerto Rican officials and sympathetic members of Congress had called on Trump to waive the cost-sharing requirement.

Trump’s declaration covers the removal of downed trees, utility poles and other debris, as well as spending for emergency measures to protect lives and public health and safety. 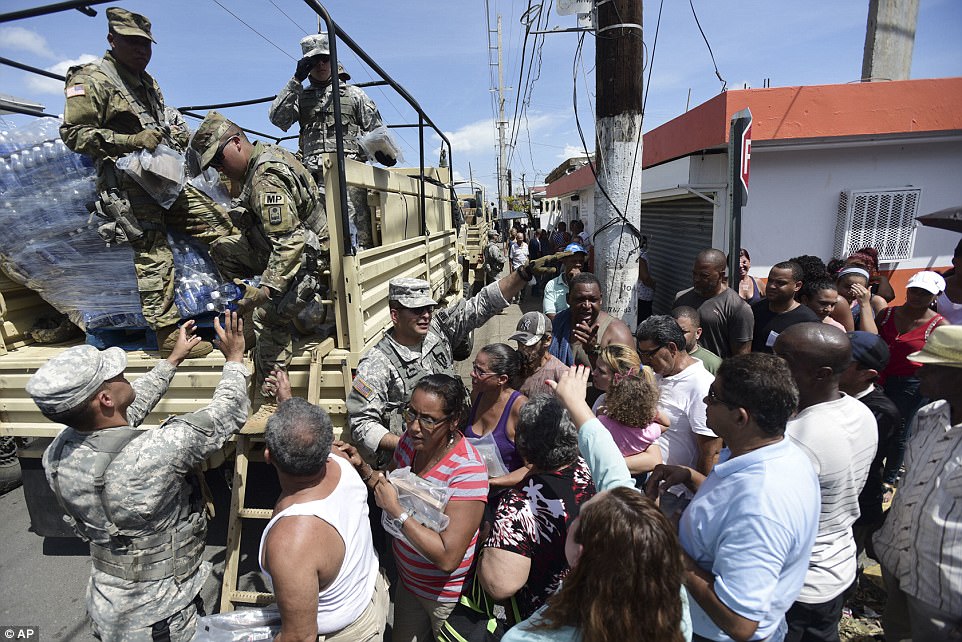 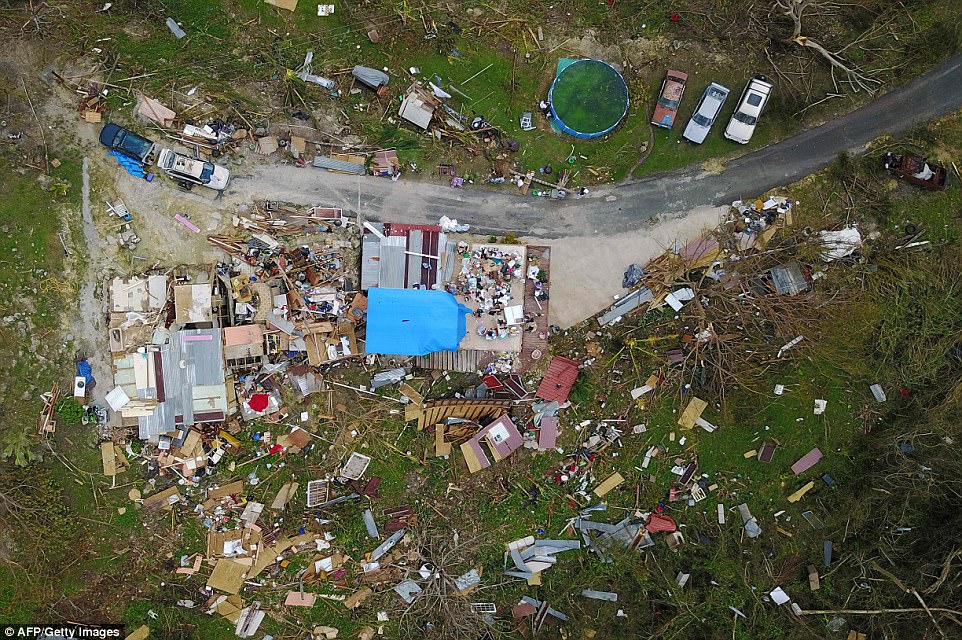 A house destroyed by hurricane winds is seen in Corozal, west of San Juan, Puerto Rico. The scale of destruction is just now emergint as 95 percent of the island remains without cell phone service 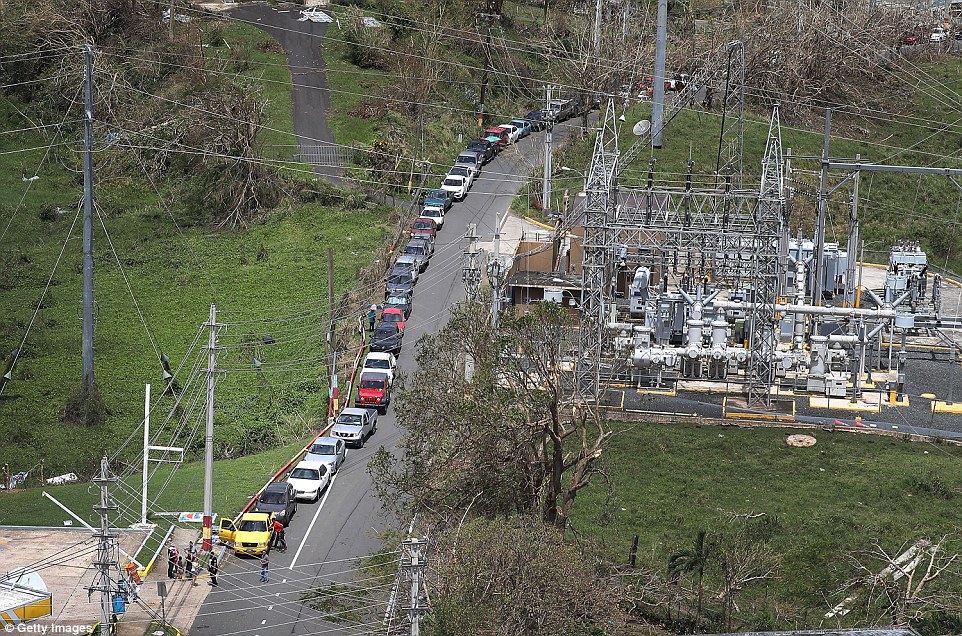 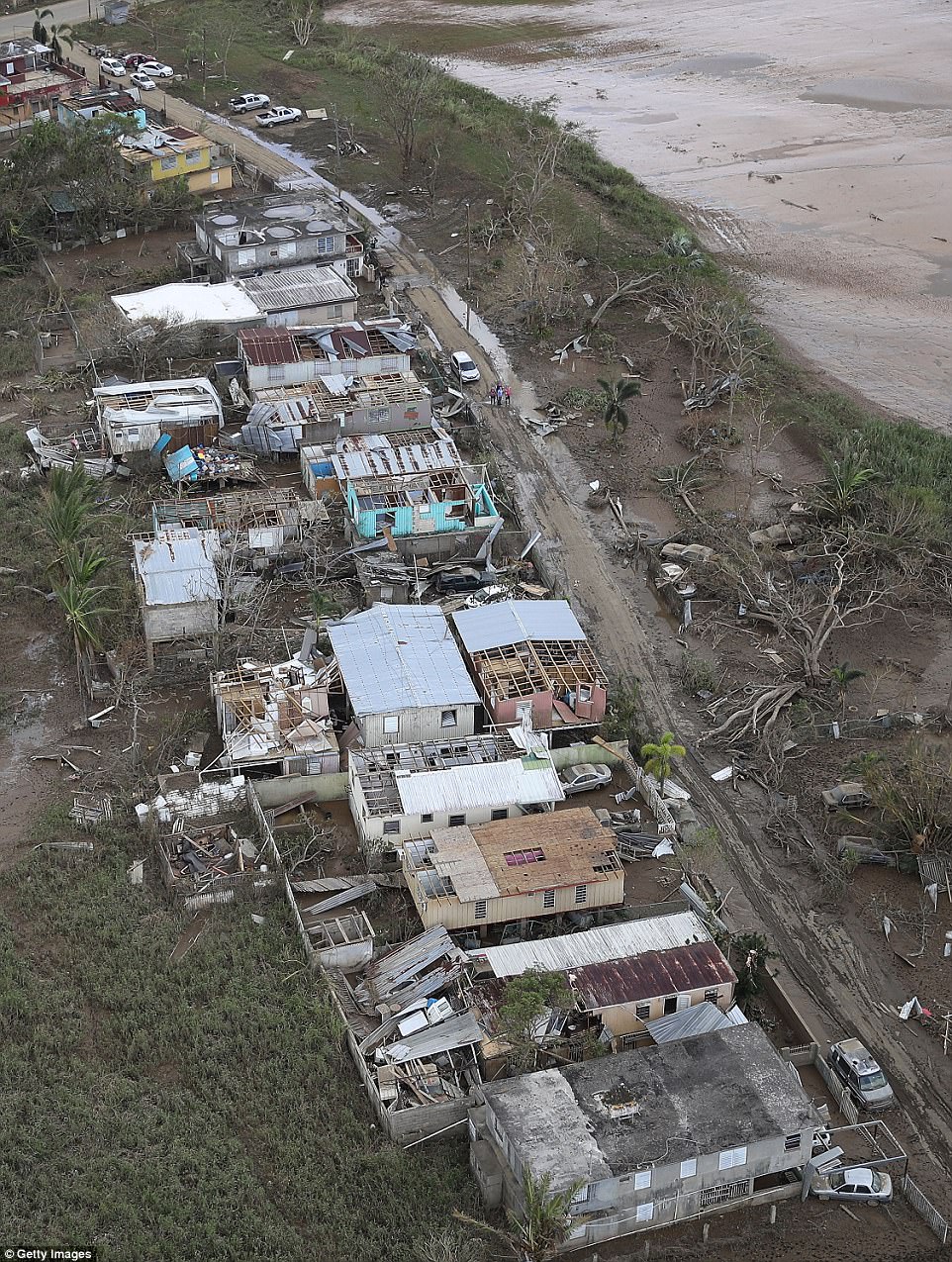 Pictured is the damage wrote to a street of homes in Toa Baja, Puerto Rico. The photo was taken on September 25 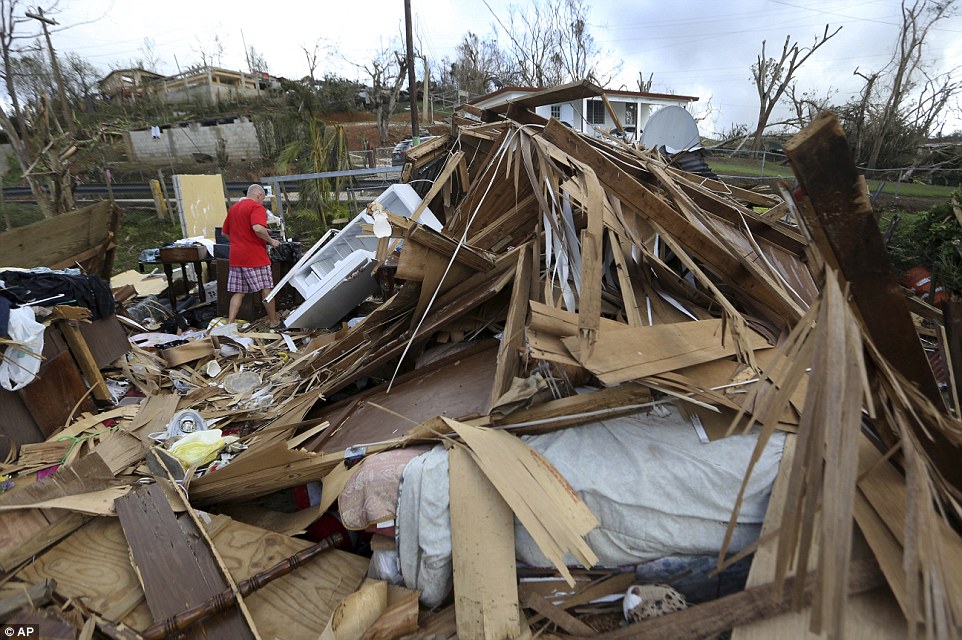 Jose Garcia Vicente walks through rubble of his destroyed home, in the aftermath of Hurricane Maria, in Aibonito, Puerto Rico