Stunning satellite images of coveted celebrity enclaves now reduced to rubble serve as proof that wildfires pay no mind to fame and fortune as they tear a trail of destruction.

Beautiful homes belonging to the biggest names in Hollywood including Gerard Butler, Miley Cyrus and Robin Thicke stood helpless in the path of the Woolsey Fire, which blackened more than 96,000 acres of picturesque canyons and rolling green hills from north of Los Angeles to the Pacific Ocean.

Others including the Kim Kardashian, Caitlyn Jenner, Pierce Brosnan and Lady Gaga were lucky that the flames merely lapped at the edge of their properties without causing much damage. 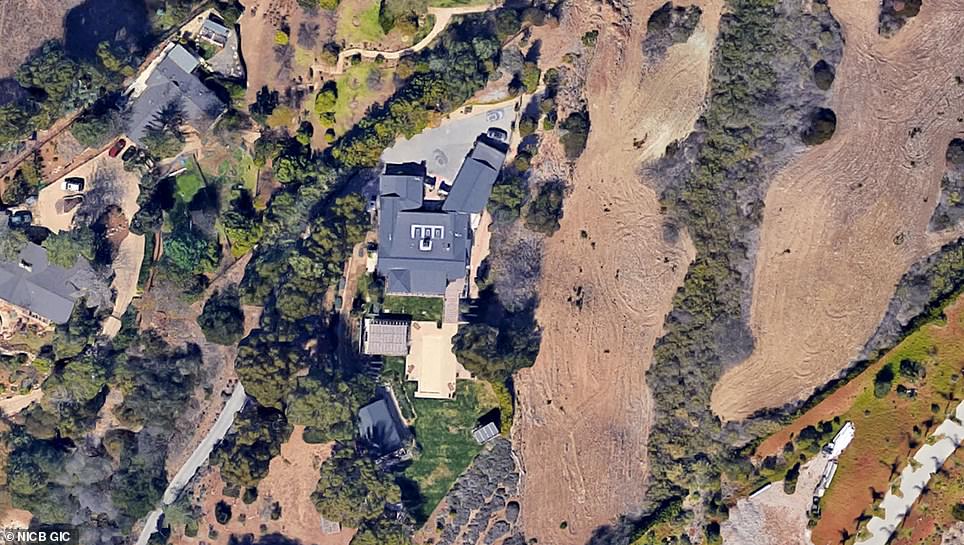 The Malibu home Liam Hemsworth shares with fiancée Miley Cyrus was one of many celebrity properties ravaged by the Woolsey Fire as it tore across nearly 100,000 acres in Southern California in less than two weeks 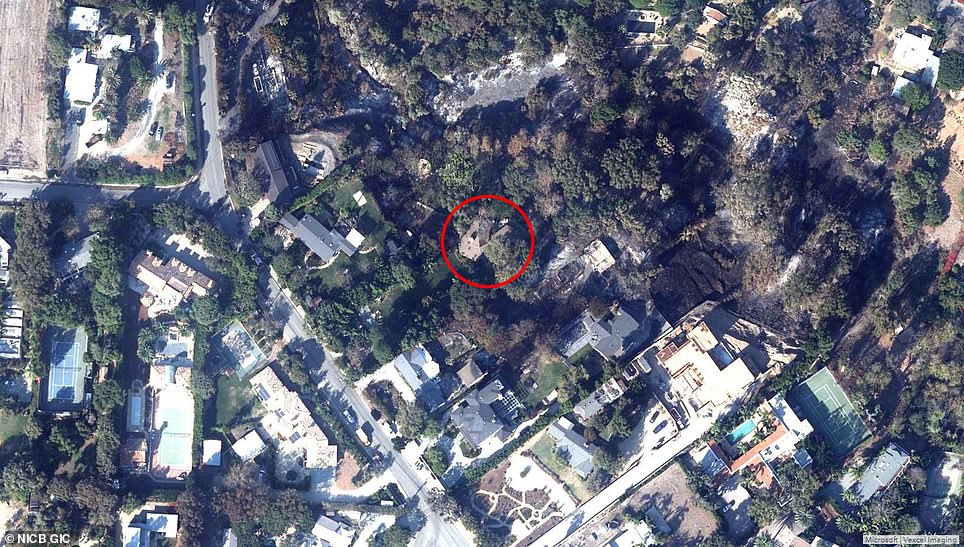 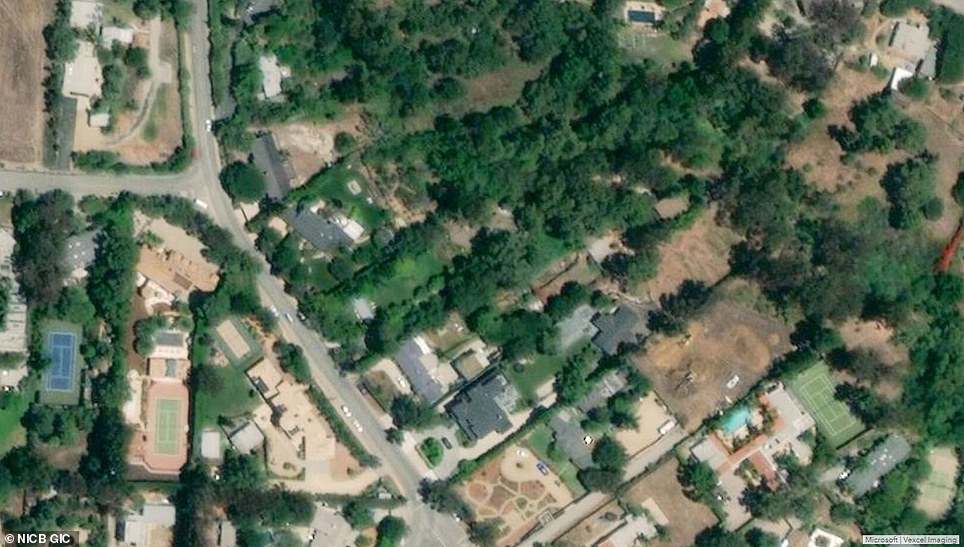 The lush greenery surrounding Gerard Butler’s property was blackened by the Woolsey Fire, which destroyed his guest house 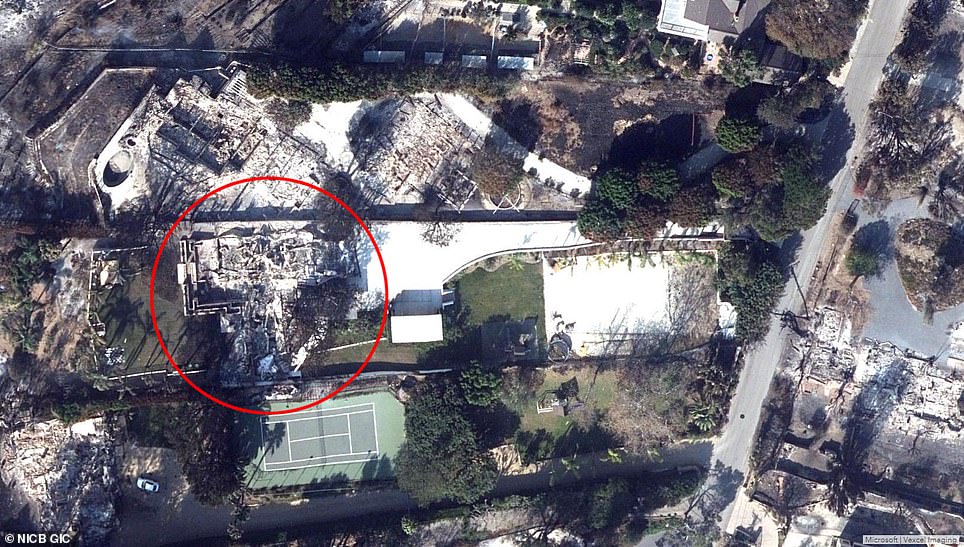 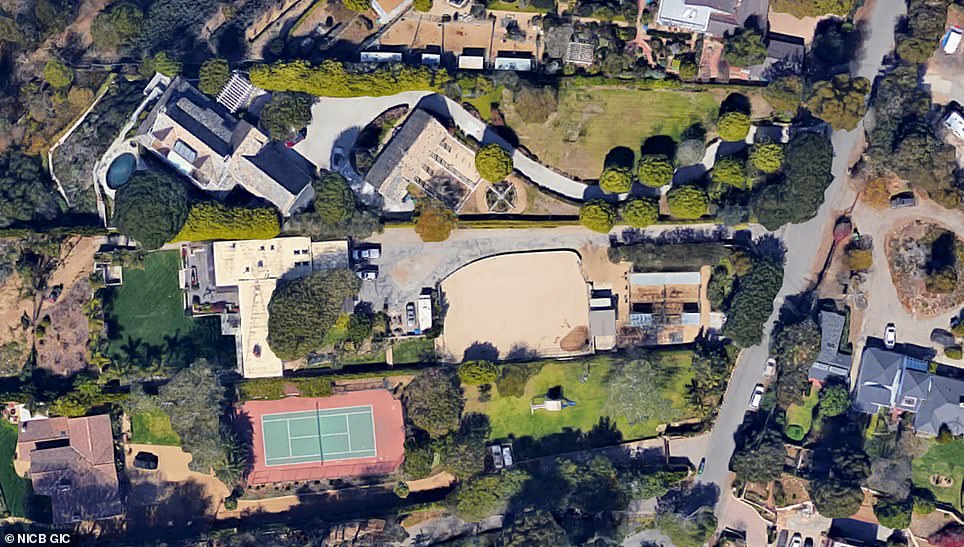 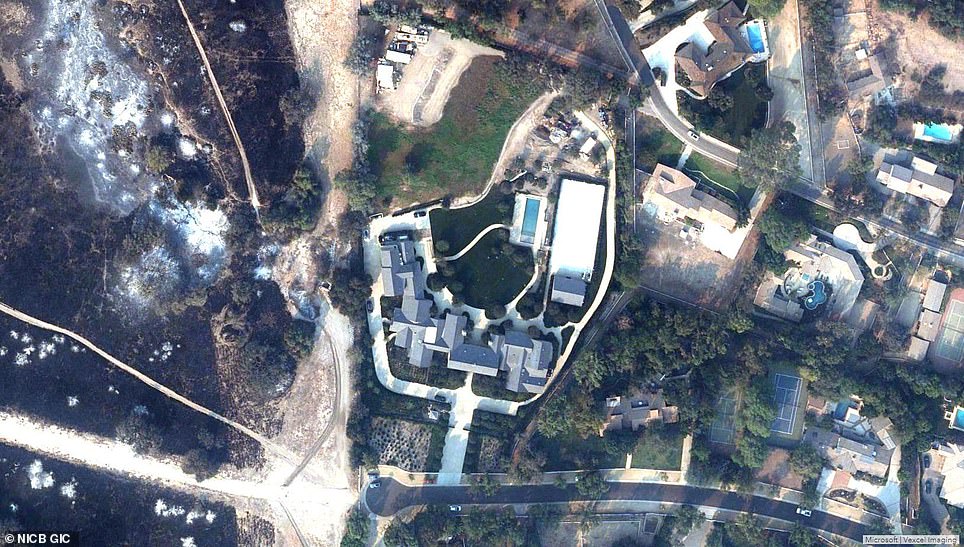 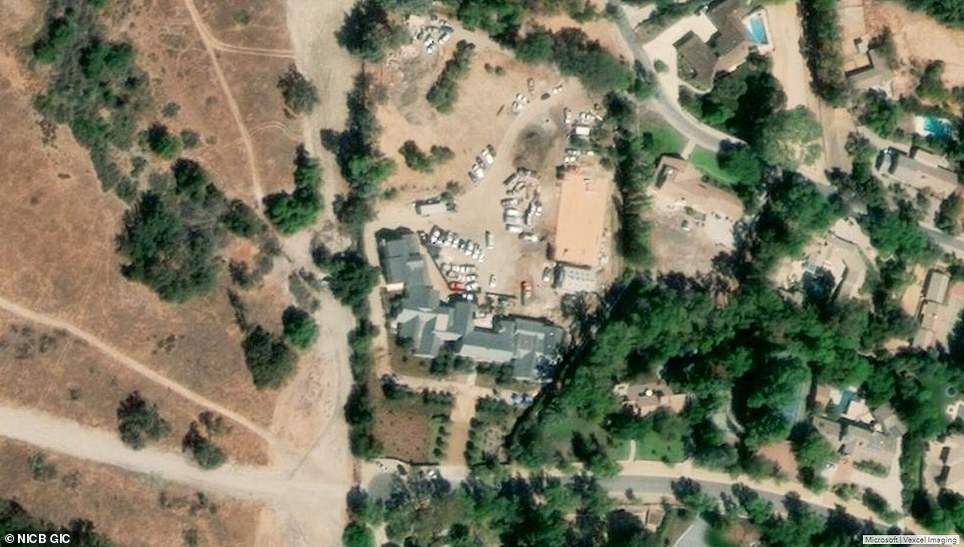 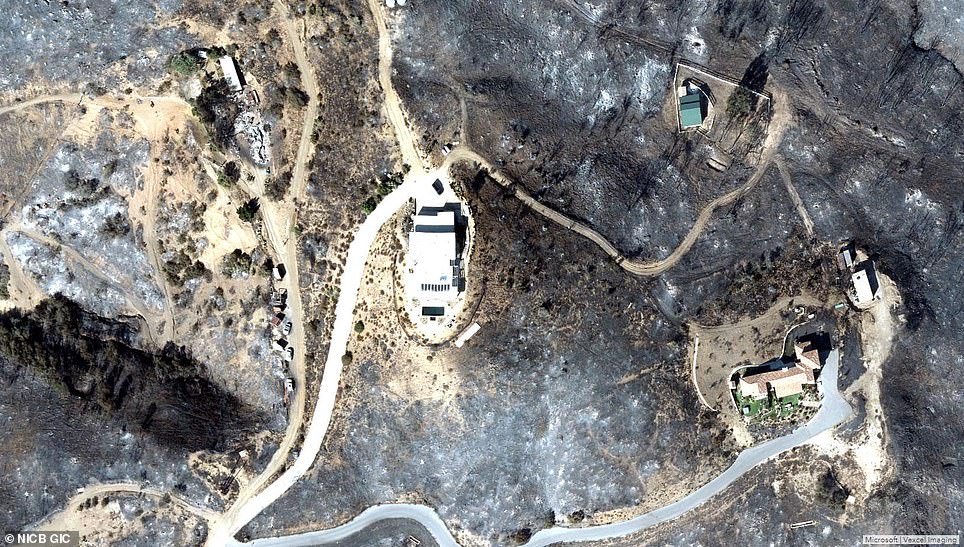 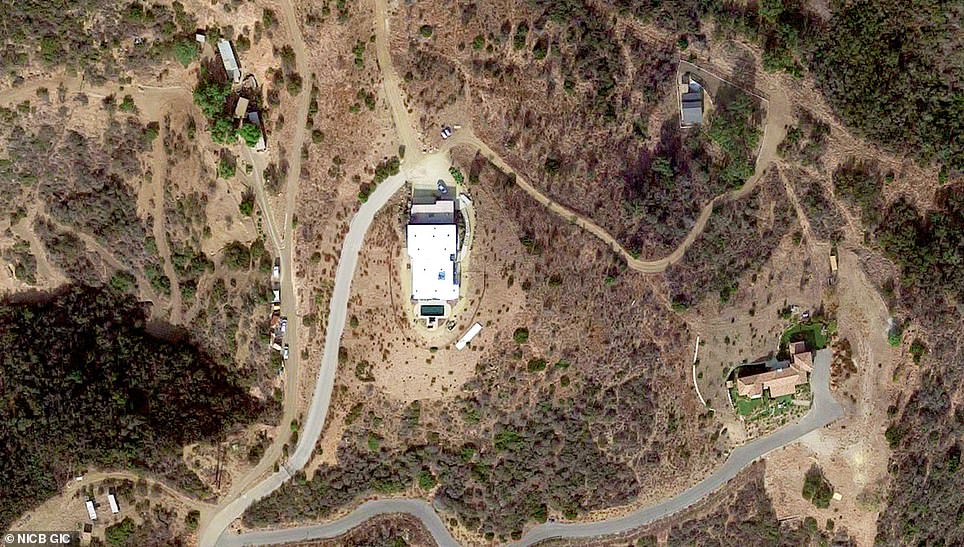 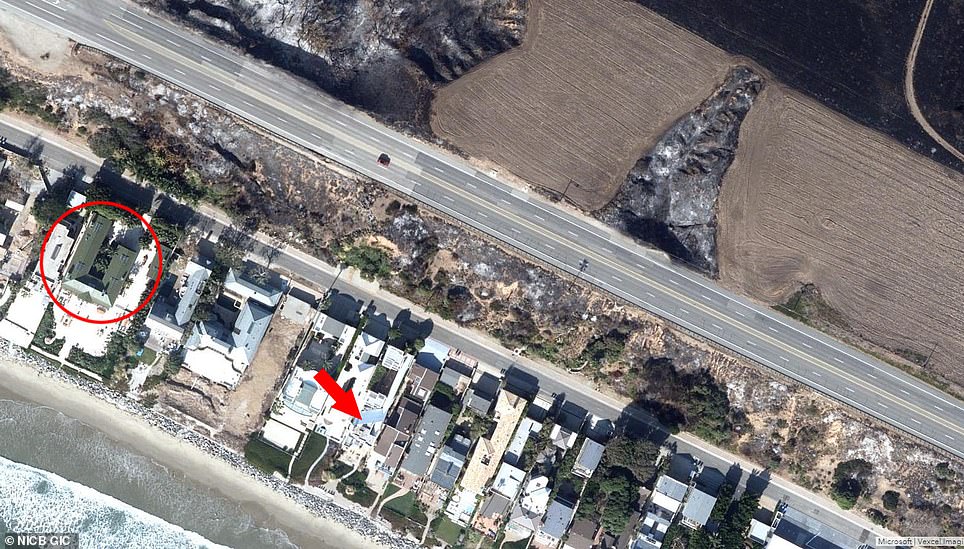 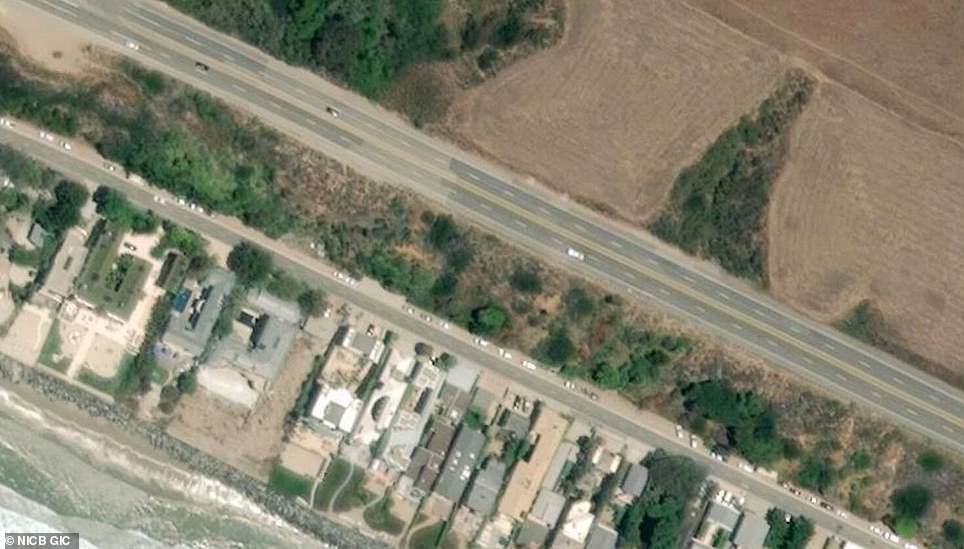 The Woolsey Fire came right up against a Malibu neighborhood where Pierce Brosnan and Dustin Hoffman have beachside homes. Brosnan’s is circled and the red arrow points to Hoffman’s

More then 250,000 residents of Southern California were forced to evacuate their homes over a week ago as the out-of-control inferno fire destroyed at least 1,130 structures, damaged another 300 and left at least three people dead.

The fire is now at 88 percent contained but large areas of Los Angeles still remain off-limits due to downed power lines, embers that could re-ignite, buckled roads, and lack of power and communications.

Fire victims have only just begun what will be a long road to recovery – as many celebrities use their influence to ask for aid for their communities. 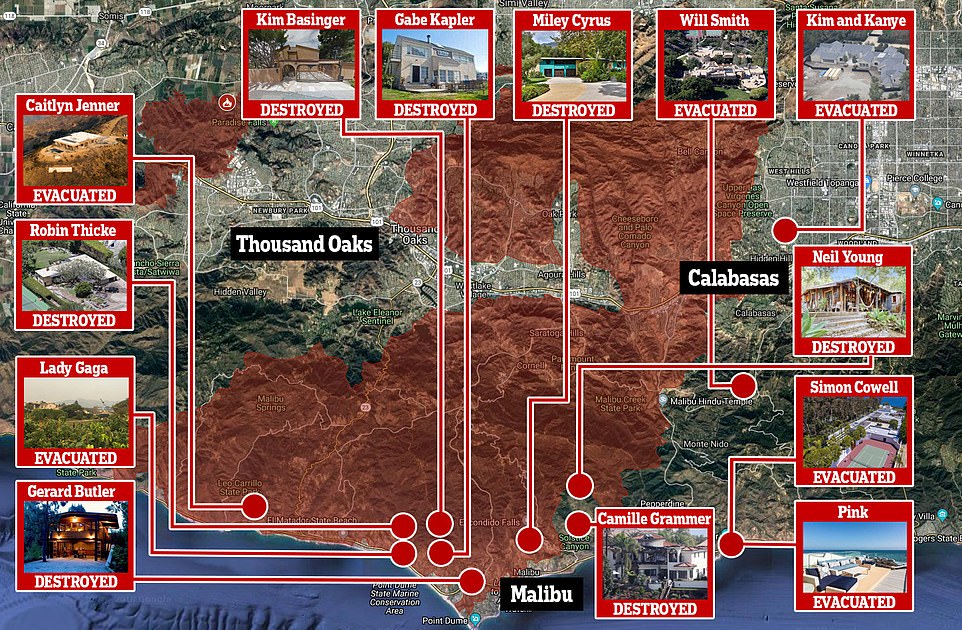 The Kardashian clan, Simon Cowell, Will Smith and Martin Sheen were also among those who had to evacuate as Woolsey tore through the star-studded Malibu, Hidden Hills, and Calabasas areas 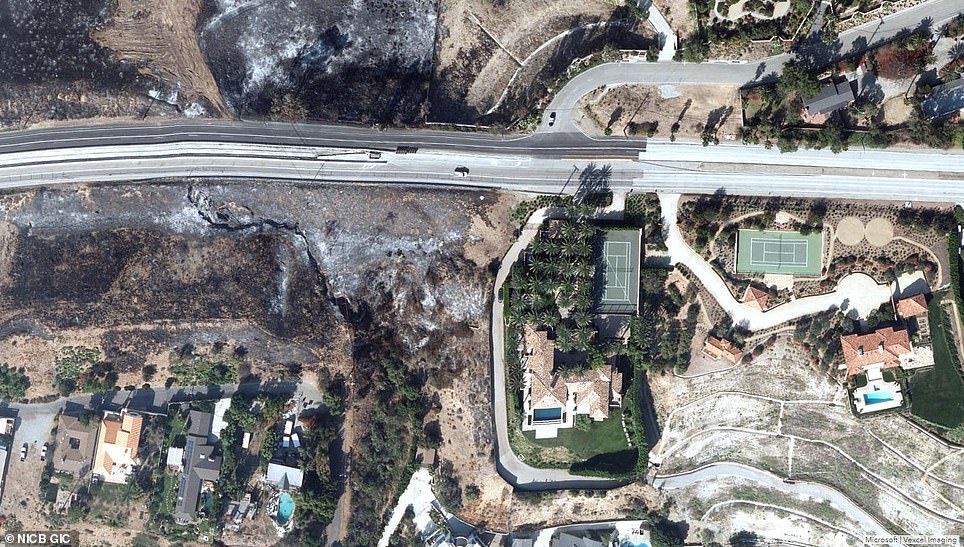 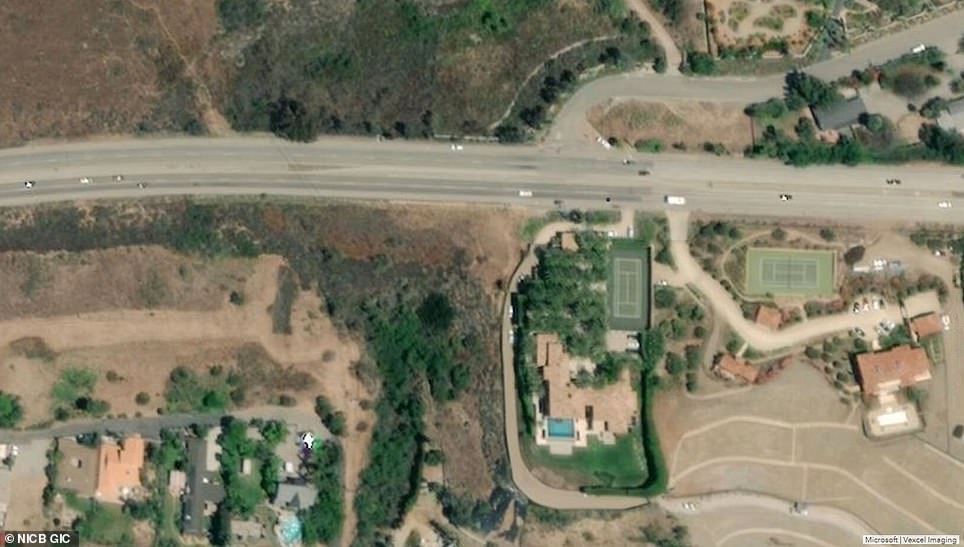 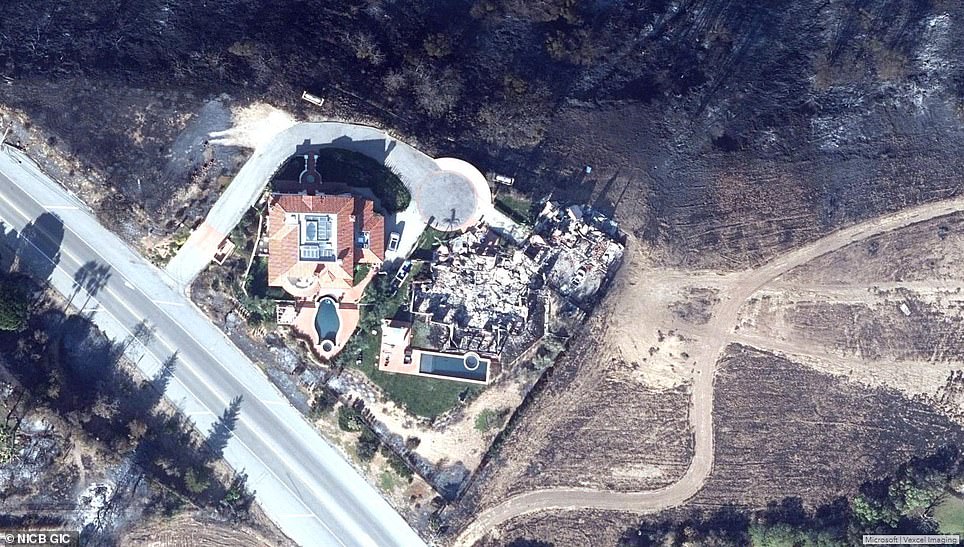 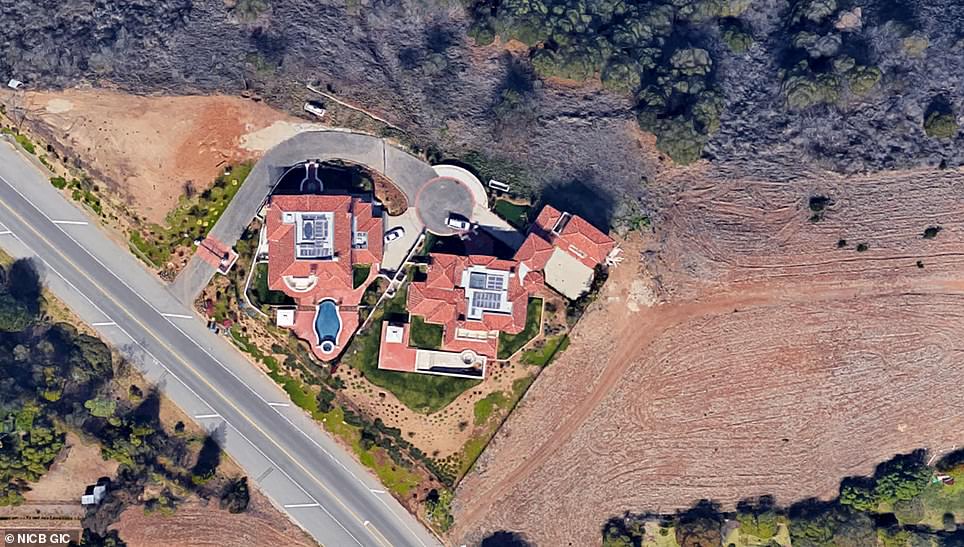 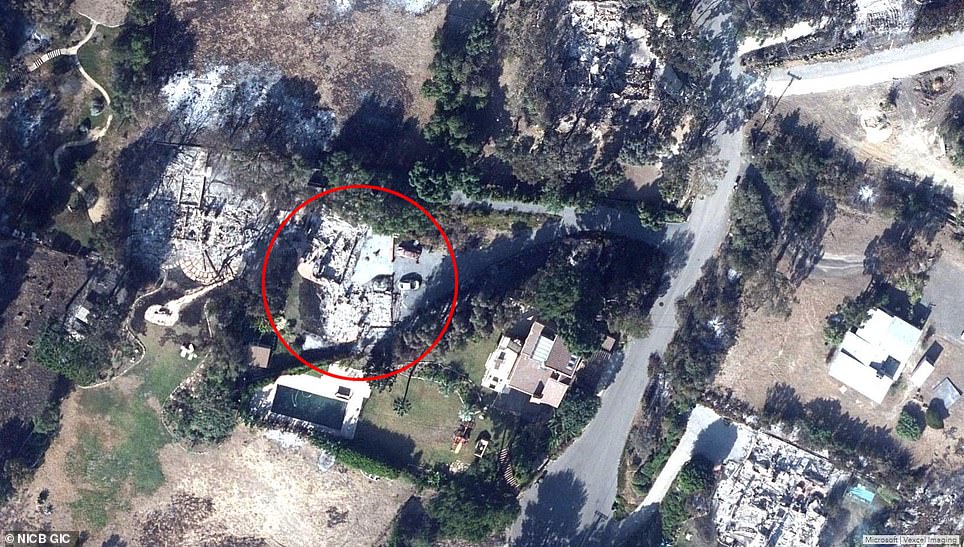 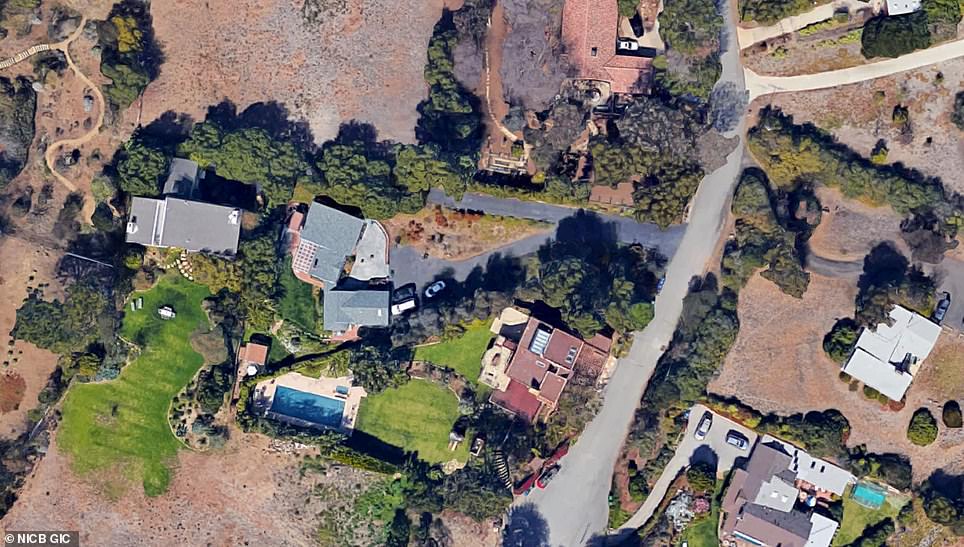 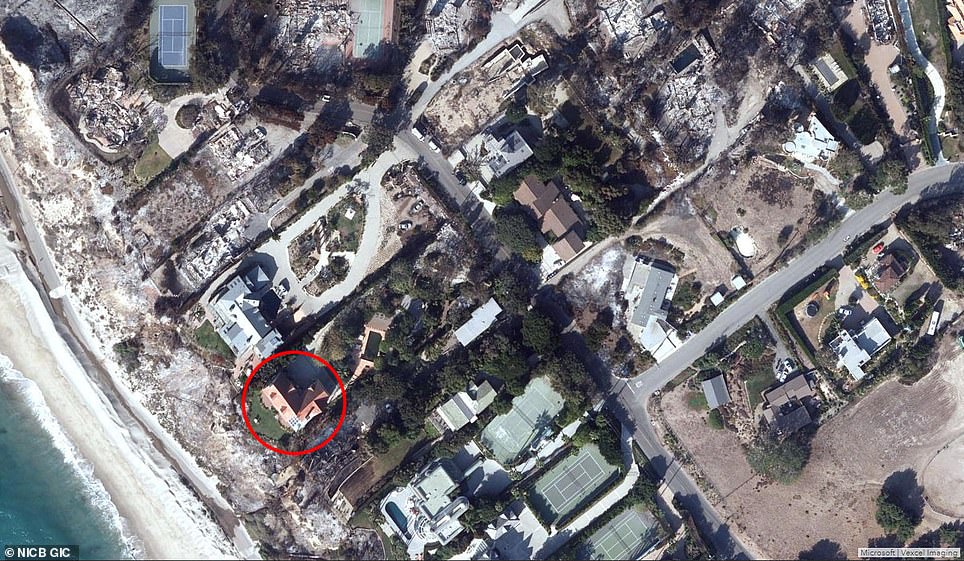 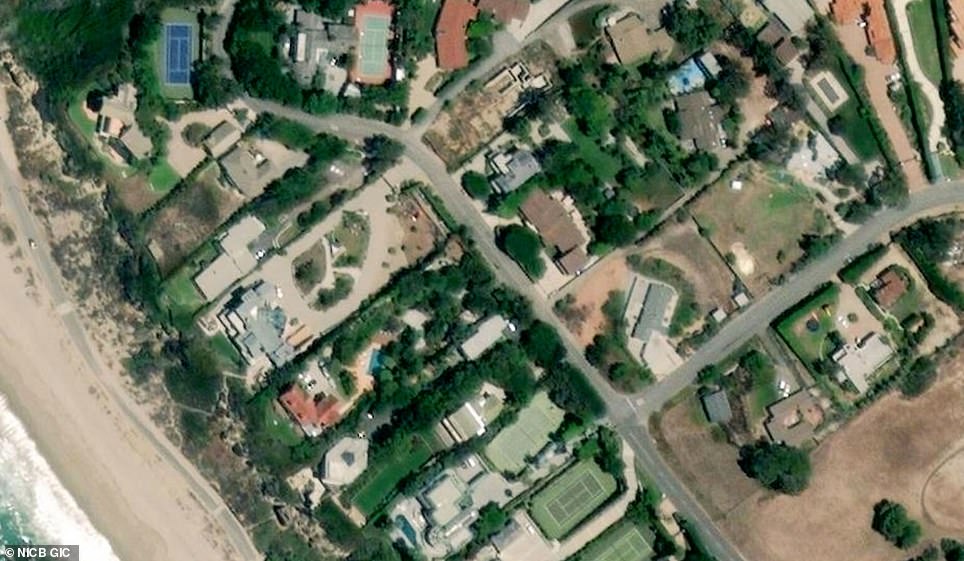 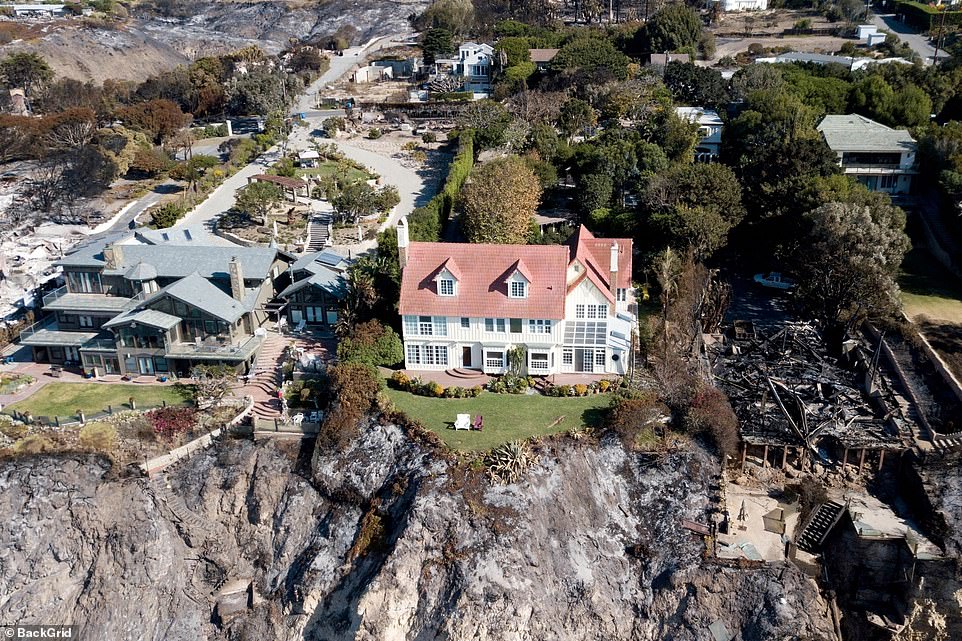 Hopkins’ neighbors home was completely razed by the fire, but his was miraculously left standing

The jarring images of the close call comes after reports the couple hired a private squad of firefighters to protect the property amid the recent Southern California wildfires.

The firefighters persistently dug ditches and hosed down the area amid the searing fires, TMZ reported last week. 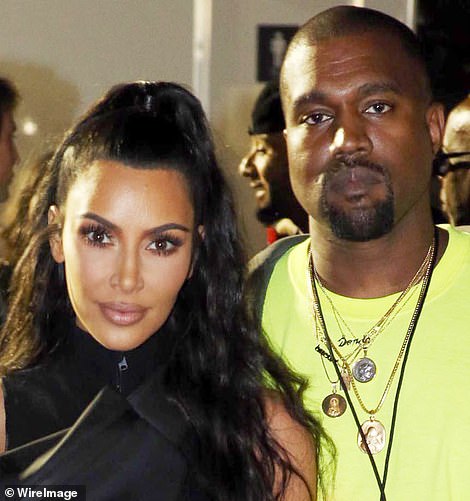 Overhead photos display a charred area surrounding the mansion, which was encroached by fire after authorities ordered a mandatory evacuation of the region, according to the outlet.

Neighbors of the reality TV queen, 38, and the Grammy-winning artist, 41, appreciated the efforts the couple made due to the layout of the area, the outlet reported.

A fire to Kim and Kanye’s home, which is situated paralleled to a field and at the end of a cul-de-sac, could have triggered further home fires.

Kim kept her massive social media following in the loop amid the fires last week, at one point taking to Twitter to address the status of the home.

‘I heard the flames have hit our property at our home in Hidden Hills but now are more contained and have stopped at the moment,’ she wrote on November 9.

‘It doesn’t seem like it is getting worse right now. I just pray the winds are in our favor. God is good. I’m just praying everyone is safe.’

She continues: ‘Fire Fighters, I love you and thank you for doing all that you can to keep us safe!’

The couple evacuated their entire security team after reports the flames were encroaching on their home.

Kim showed her appreciation to those who fought the flames at the People’s Choice Awards in Santa Monica last week.

Kim said she and her family were dedicating the best reality show award they won for Keeping Up with the Kardashians star ‘to all of the firefighters, police offers, and first responders’ who put their lives on the line to extinguish the fires.

‘As horrible as this has been, it’s been amazing to see the spirit of everyone involved,’ Kim said. ‘So anything that we can do to help the many organizations – no form of help is too small. We must continue to reach out and help each other in these trying times.’

Her husband Kanye also hinted at future efforts to preserve the neighborhood from fires.

Gerard Butler filmed the devastation around his smoldering neighborhood just a day after a horrifying California wildfire tore through the area.

Butler, whose home was destroyed, was driving around Point Dume on Saturday when he captured the destruction his community in two videos.

‘It’s like a war zone,’ Butler tells viewers as he surveys the area destroyed by the Woolsey blaze. ‘Every house after a certain point is gone.’ 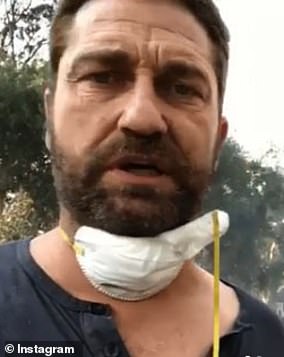 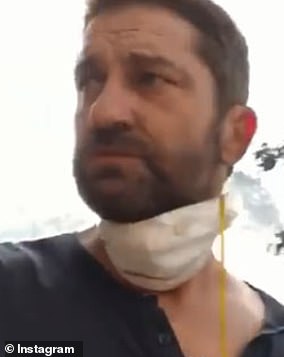 ‘What a difference a day can make to a community,’ the actor says as he walks into a backyard of a home.

Butler shared the videos on Instagram on Monday afternoon.

‘My heart aches for all those who lost their homes and their lives in California. A lot of people lost everything and will have to rebuild from scratch,’ he wrote in the caption.

‘I am ok and so grateful for all of the well wishes,’ Butler said before encouraging others to donate to a GoFundMe account that has been set up to help people across California affected by the fires.

Miley Cyrus, Robin Thicke, and Camille Grammer Meyer of The Real Housewives of Beverly Hills were among those whose Malibu homes were destroyed in the Woolsey fire. 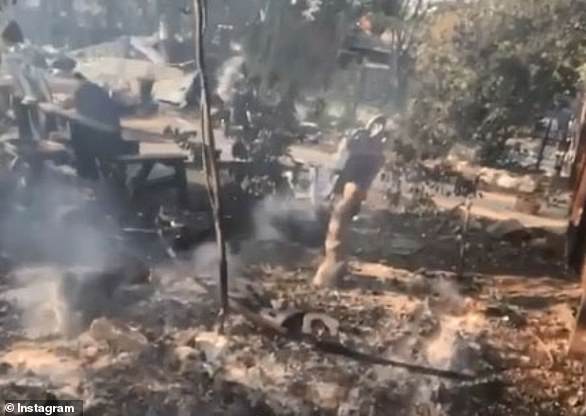 Butler, whose home was only partially destroyed, was driving around Point Dume on Saturday when he captured the destruction in two videos 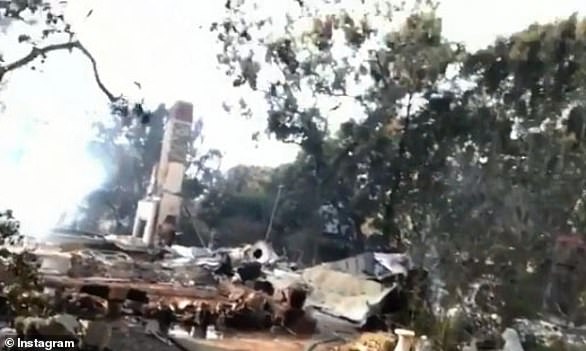 ‘It’s like a war zone,’ Butler tells viewers as he surveys the area. ‘Every house after a certain point is gone’

‘What a difference a day can make to a community,’ the actor says as he walks into a backyard of a home. Butler shared the videos on Instagram on Monday afternoon 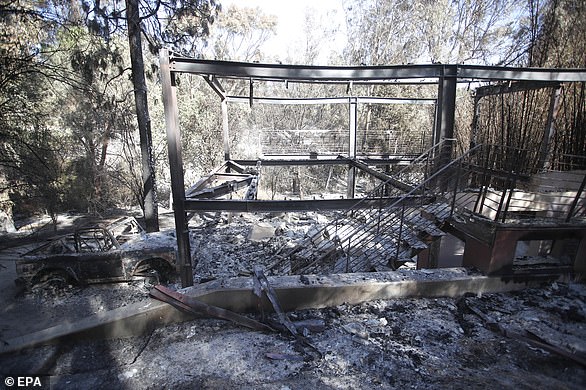 Gerard Butler’s home is seen in ruins on November 12 after being destroyed by the Woosley Fire in Malibu, California