Saturday Night Takeaway producers have reminded viewers that Dec Donnelly will be going live tonight with out his fellow presenter, Ant McPartlin, for the first time in decades after they posted a photo of the show’s script.

It comes amid reports that Dec will deliver a touching message of support to his troubled friend at the start of the programme.

ITV bosses were reportedly left in panic this morning when trying to work out how best to address the host’s absence from the show.

Ant, 42, is currently back in rehab after being charged with drink-driving following his car crash in London earlier this month.

Tonight will be the first time in Declan Donnelly’s career where he will head to the stage without his presenting partner (pictured: Dec in the trailer for the upcoming shows which was captured on a back of a plane’s chair which will take winning viewers to Florida) 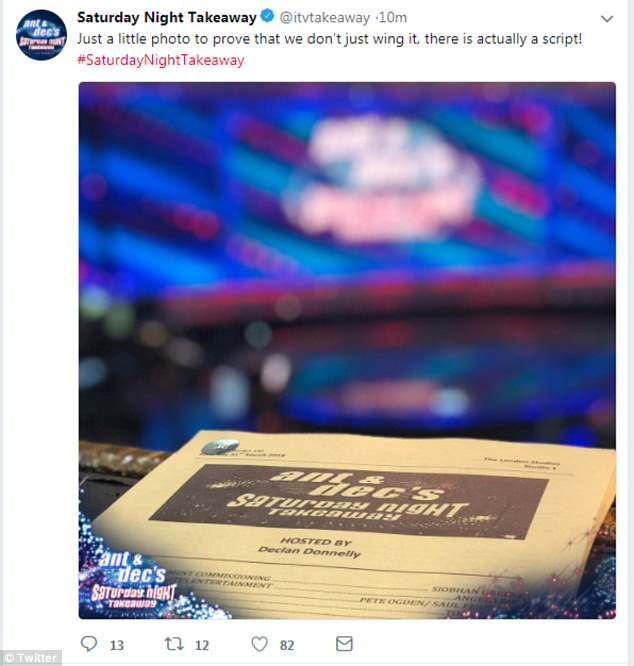 Posting a photo of the show’s script on Twitter ahead of tonight’s programme, The Saturday Night Takeaway team wrote: ‘Just a little photo to prove that we don’t just wing it, there is actually a script’

This has left his best friend of 29 years Dec, 42, to host their last two Saturday Night Takeaway shows without him.

Posting a photo of the show’s script on Twitter ahead of tonight’s programme, The Saturday Night Takeaway team wrote: ‘Just a little photo to prove that we don’t just wing it, there is actually a script!’

It was a subtle reminder for fans that Dec would be presenting alone as the top of the script read: ‘Hosted by Declan Donnelly’.

People were quick to offer the best of luck to the entertainer with one writing: ‘Good luck Dec and the team, you’ll smash it! Ant, we will miss you, get well soon and come back stronger.’

Another said: ‘“Declan Donnelly” go Dec, you are gonna smash this!’

Dec will be ‘addressing the elephant in the room’ in his opening monologue, report the Daily Express.

ITV bosses were reportedly going to decide between three particular options this morning when addressing the issue of Ant’s sudden departure from the popular Saturday night show.

The first being that Dec will apologise for his partner’s no-show and briefly mention Ant’s drink-driving arrest of two weeks earlier, or instead the 42-year-old could offer a ‘get well soon’ message to his friend in rehab.

Finally, head decision makers at the production company might suggest not mentioning Ant at all.

A television insider told The Sun: ‘Explaining Ant’s absence has been the hardest part of planning. The bosses are torn in regards to how they can hit the right tone. 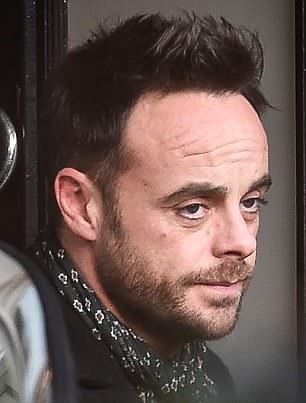 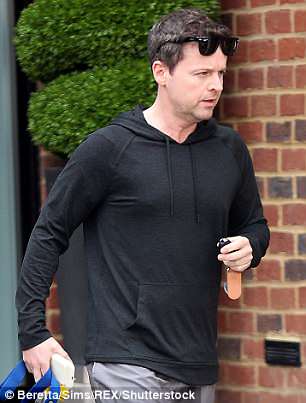 Dec looked sombre on his recent outings (pictured right in London on March 22). He confirmed he will present the final two Saturday Night Takeaway episodes solo in a Twitter statement last week while Ant (left leaving his home in London on March 21) attends rehab 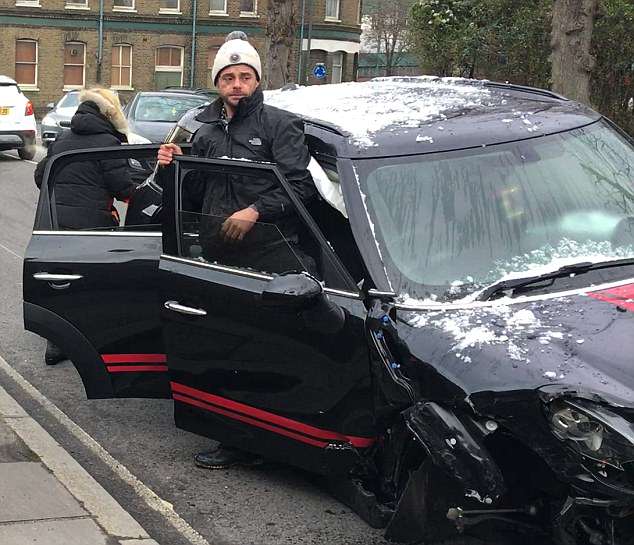 Ant McPartlin is currently back in rehab after being charged with drink-driving following his car crash in Richmond, south west London, earlier this month. His £26,000 Mini (pictured) collided with two other vehicles

‘They want to be respectful to people involved in Ant’s car accident, while not bringing down the mood of the show.

‘Takeaway is all about having fun and they fear a sombre start may seriously effect the quality of the output.’

On Friday, Dec was pictured looking sombre when he arrived to rehearsals for Saturday Night Takeaway — for the first time without his partner.

‘Whilst I never thought I’d be in this position, after much discussion and careful consideration we’ve decided that the remaining two shows of this series of Saturday Night Takeaway will go ahead. 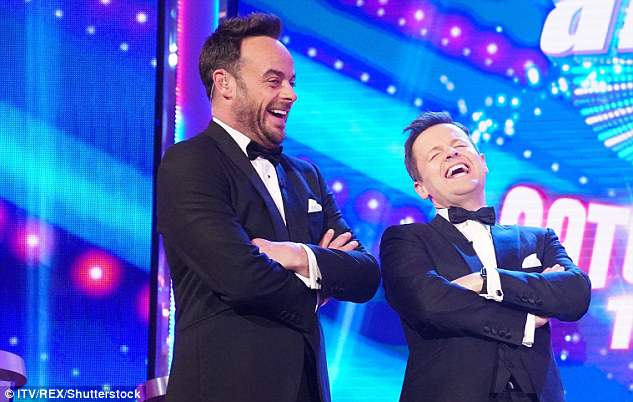 ITV bosses were panicking over how Dec should handle Ant’s absence from Saturday Night Takeaway (pictured together: the duo presenting the second episode of the 2018 series) 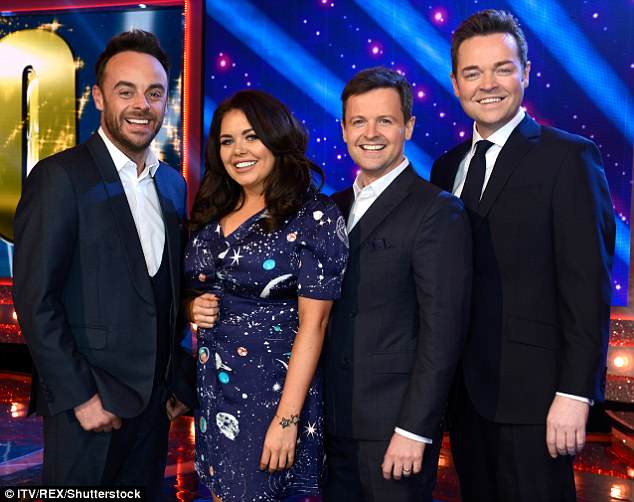 Stephen Mulhern will appear on tonight’s show in a supporting role alongside Scarlett Moffatt (pictured: the four presenters ahead of the 2018 series)

ITV were apparently affected by the decision not to air last weekend’s episode, with the broadcaster reportedly losing three million viewers after the show was replaced by The Voice on Saturday evening.

Ant reportedly gave Dec his blessing to host the final two episodes of Saturday Night Takeaway without him.

The pair had previously made an on-screen pledge to never host without the other but the drama over the recent months has meant Dec had to go back on his promise. 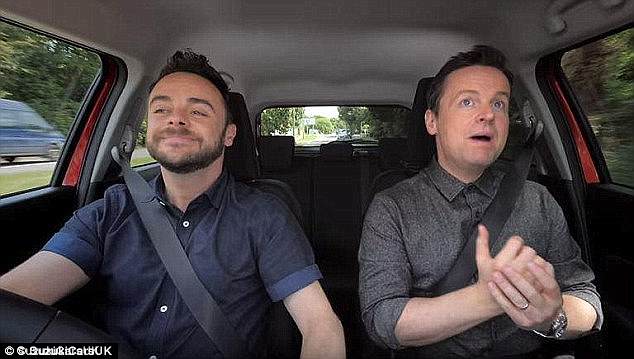 More bad news arrived for Ant recently as car company Suzuki axed its £20million advertising deal with the presenting duo (pictured: the pair in one of the organisation’s ads)

In a statement ITV said: ‘We can confirm that Saturday Night Takeaway, presented by Declan Donnelly, will return to ITV on March 31, and the series finale will be taking place at Universal Orlando Resort in Florida a week later.’

Also seen attending the studios ahead of the show tonight was Stephen Mulhern, who will also appear on tonight’s show in a supporting role alongside Scarlett Moffatt.

Although reportedly neither will take Ant’s place in regular feature Ant vs Dec as bosses have decided to scrap the popular segment.

Friends say Ant has been hit ‘hard’ by his impending £60million divorce from his wife of 11 years Lisa Armstrong, and was entering rehab in light of the drink-driving charge. 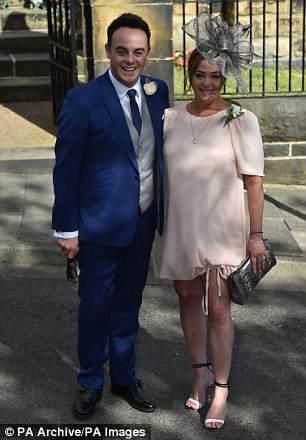 The Metropolitan Police confirmed Ant has been charged and will appear at Wimbledon Magistrates Court for a hearing on April 4.

It comes after he crashed his £26,000 John Cooper black Mini into two other cars in Richmond, south west London, on March 18.

As a result the star checked back into rehab, following an earlier stint when he was treated for a painkiller addiction.

In a statement, Ant’s publicist said: ‘Ant has decided to go back into treatment and step down from his current TV commitments.

‘He has spoken with Dec and ITV and asked for time off for the foreseeable future.’

Impressive pictures have revealed the stage for the series finale – hosted in Florida – which is under construction.

And on Twitter Dec wrote: ‘Back in studio today preparing your #SaturdayNightTakeaway for tomorrow night. Have a great Good Friday! D x’

Hosting duties: Dec wrote on the social media site: ‘Back in studio today preparing your #SaturdayNightTakeaway for tomorrow night. Have a great Good Friday! D x’ 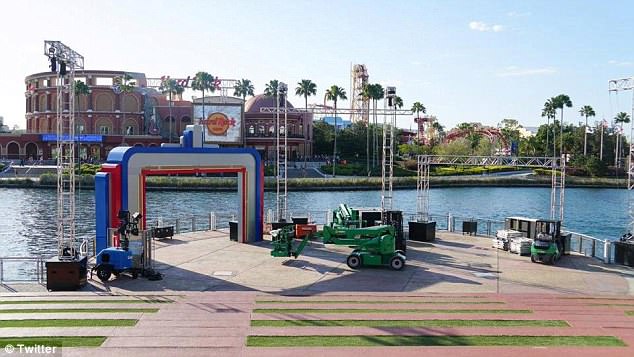 Set up: An eye-catching blue, red and gold archway has been set up at the site, among camera equipment, ahead of the show’s grande finale