An unusual hexagon covering Saturn’s north pole may be the result of giant cyclones going deep into the ringed planet’s atmosphere, a new study shows.

This polar hexagon is 18,000 miles wide and has been observed for the past 40 years – since it was first discovered by the NASA Voyager mission in 1981.

Giant cyclones could be forming thousands of miles inside the gas giant, coinciding with jet flows in different directions and other airflows to create the hexagon.

The team, including Rakesh Yadav and Jeremy Bloxham, found that the storm would have to go very deep – potentially thousands of miles into the gas giant planet.

They created a computer simulation that mirrored conditions found on the ringed planet to try and recreate the hexagon – to find out how it first formed.

In their simulations a large cyclone arose around the north pole, with several smaller cyclones colliding with a strong eastward jet north of the equator.

The main cyclone was strong enough to overcome the surface gas but the surrounding, smaller vortices were masked by the stronger surface gas.

The central cyclone started much deeper inside the gas giant simulation than the surrounding ones and so was able to overcome the turbulent surface gas.

However, the shallower vortices appeared more like polygonal jets than tornadoes.

In their simulation this eastward jet formed a polygonal shape with nine edges as a result of being pinched by the surrounding vortices – on Saturn this likely led to the creation of the hexagon shaped storm we see on the north pole. 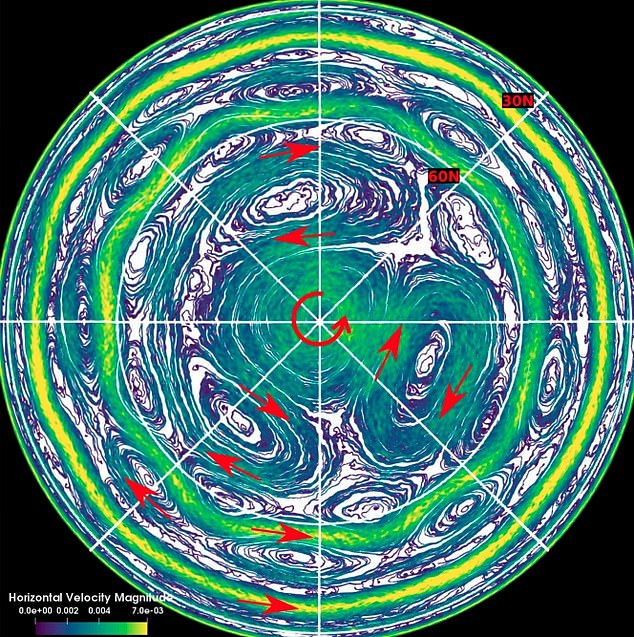 This polar hexagon is 18,000 miles wide and has been observed for the past 40 years – since it was first discovered by the NASA Voyager mission in 1981. In their simulation the team recreated a similarly large cyclone on the pole, but it wasn’t a hexagon 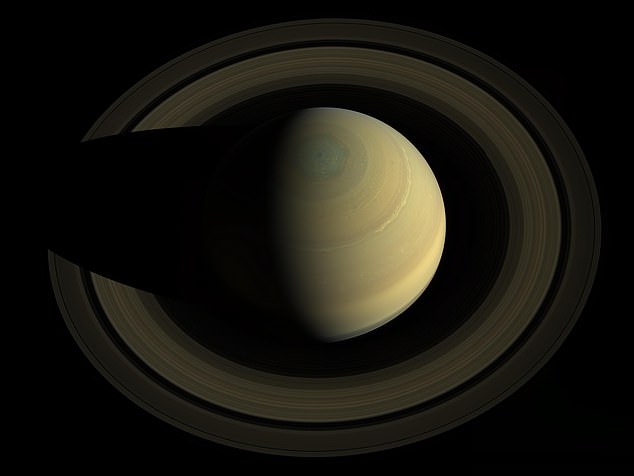 ‘The analysis of the simulation suggests that self-organised turbulence in the form of giant vortices pinches the eastward jet, forming polygonal shapes,’ they wrote.

‘We argue that a similar mechanism is responsible for exciting Saturn’s hexagonal flow pattern.’

Their simulation isn’t perfect. It only maps the outer tenth of the planet’s radius and the polar jets seem to only generate triangles instead of hexagons but they are confident it can help explain the process that creates the hexagon on Saturn.

Researchers say this is a proof of concept, rather than a full model of Saturn, as they need to incorporate more atmospheric data from Saturn to make it more realistic.

The research has been published in the journal Proceedings of the National Academy of Sciences.