Saudi Arabia is finally set to allow women to drive cars, the last country in the world to do so.

While women in Saudi Arabia will be able to get behind the wheel from June 2018, they are still not allowed to marry, divorce, open a bank account, or get a job without permission from a male relative or husband.

Finally: Saudi Arabia will become the last country in the world to allow women to drive cars, and social media mockery soon followed, highlighting their continued oppression of women

This was just one of the few facts seized upon by wannabe Twitter comedians (and real ones), as they poked fun at Saudi Arabia.

Being gay is still punishable by death, and as pointed out by Hollywood actor Rob Schneider: ‘Great news, if you’re gay you can now drive to your own stoning!’

As David Burge put it: ‘I agree it’s an encouraging sign, but banning women from driving ranks about 8,349th on Saudi Arabia’s list of human rights violations’.

Rafia Zakaria said: ‘As long as the rights of millions of Muslim women remain subject to the whims of male monarchs: driving around is at best fake freedom.’

Greta Van Susteren tweeted: ‘ Before you give high 5 to Saudi Arabia for allowing women to drive, note that women have to get PERMISSION from men to take driving lessons.’ 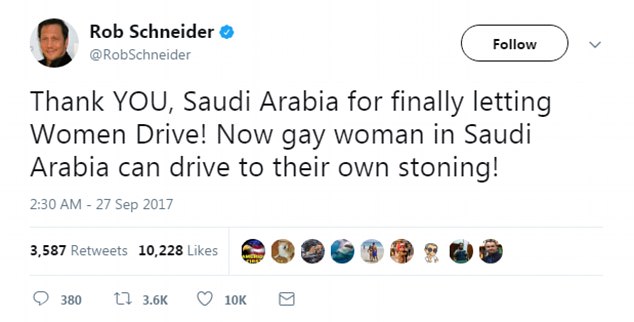 Seeing the funny side: Many, including actor Rob Schnider, poked fun at Saudi Arabia 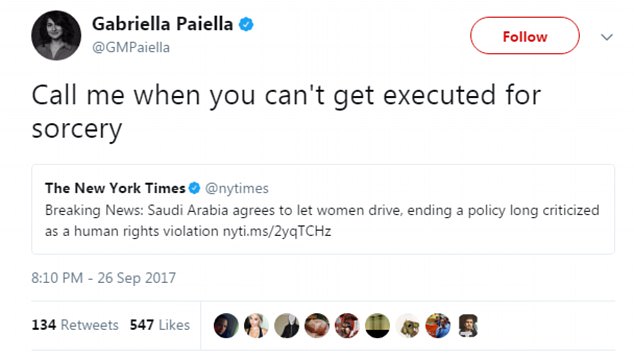 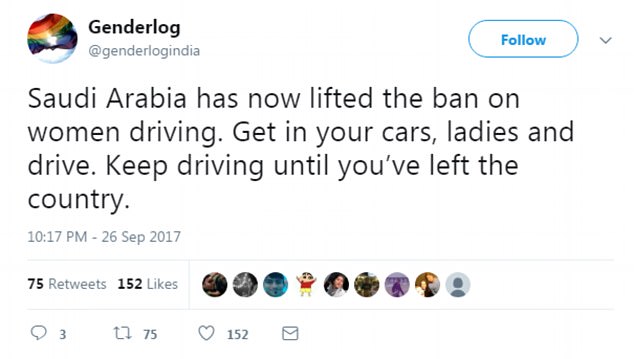 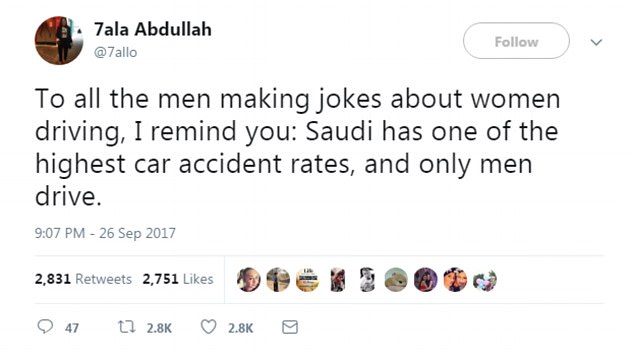 The jokes came hard and fast at the kingdom’s ‘royal decree’ to allow women to drive, while still oppressing them in a myriad of ways

Once they get their licences, the women were advised by ‘Genderlog’ to leave the country, tweeting: ‘Saudi Arabia has now lifted the ban on women driving. Get in your cars, ladies and drive. Keep driving until you’ve left the country’.

Unimpressed with the royal decree, Gabriella Paiella said: ‘Call me when you can’t get executed for sorcery.’

Will Black was more to the point: ‘Far-right misogynistic fiefdom Saudi Arabia # is letting women drive. Now if it will just stop the torture, head chopping and funding Daesh’. 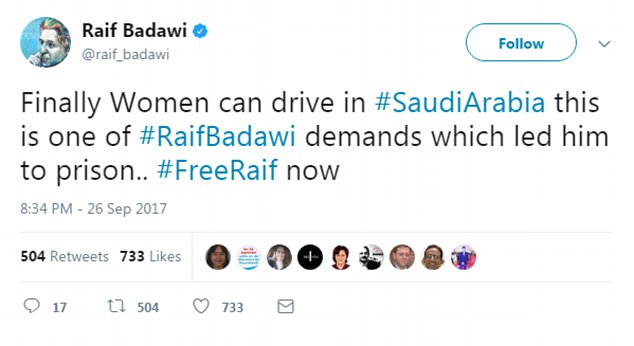 Fight for freedom: The Twitter account of jailed blogger Raid Badawi – run by his wife – commented that he had been jailed working for this to be reality 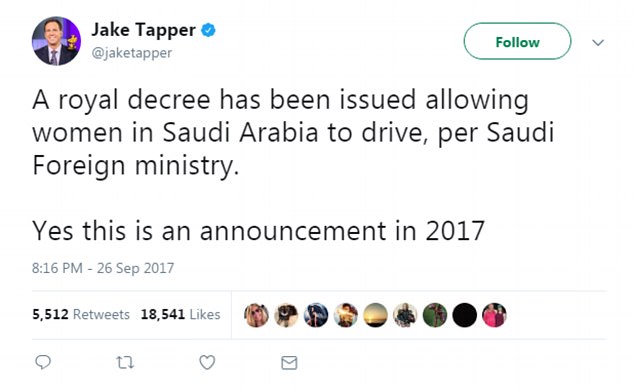 And Harry Leslie Smith said: ‘#Saudi Arabia when crucifixion is still part if your penal code letting women drive is just like getting a new awning for the gates of hell.’

There was also a backlash against the ‘Saudi misogynists’ clerics, who over the years had taken to the airwaves to say why women should not be allowed to drive, with one claiming they only have a ‘quarter of the brainpower of men’ and another saying driving damages women’s reproductive organs because ‘her pelvis bounces on her ovaries’. 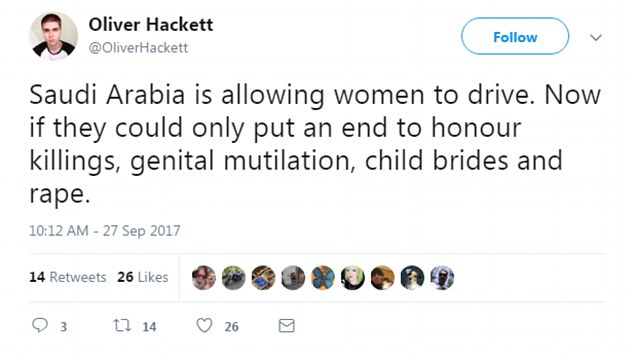 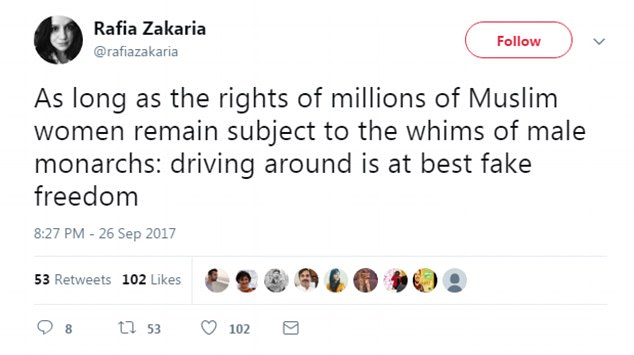 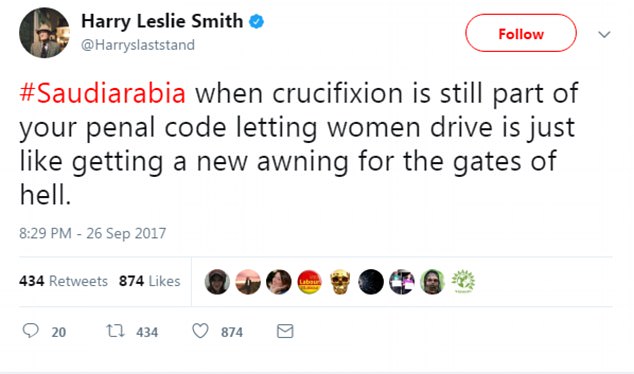 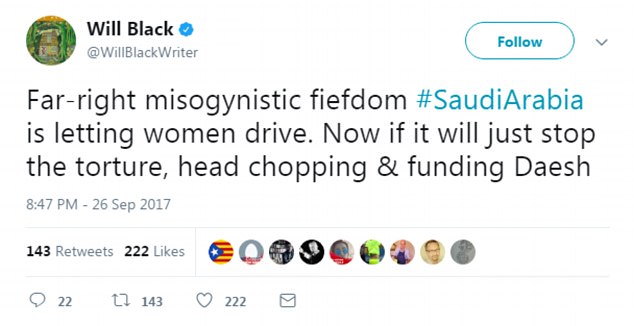 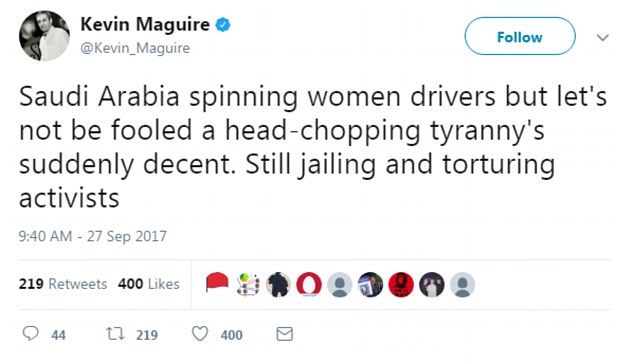 ‘Spicy fatwa’ said: ‘Now that saudi women can drive, can we hear back from that one sheikh who said driving will damage ovaries and lead to birth defects’.

In Saudi Arabia, women still cannot have any interaction a man who she is not related to without permission from a male guardian, and have no rights in custody battles when the children reach a certain age.

But, despite everything, some are hopeful the royal decree to allow women to drive from June 2018 might be the start of something.

Manal Al-Sharif was jailed in 2011 for making a video of her driving herself around and posting it on youtube – where it got 700,000 views in a day.

Yesterday she tweeted: ‘You want a statement here is one: ‘Saudi Arabia will never be the same again. The rain begins with a single drop’.