Saudi Arabia’s ambassador to Germany has said ‘all options are on the table’ in responding to attacks on the country’s oil supply which it has blamed on Iran.

Prince Faisal bin Farhan al-Saud refused to rule out military strikes against Tehran in retaliation for blasts that knocked out half the country’s oil output and disrupted global supplies.

But, he cautioned, ‘you have to discuss [strikes] well’ before carrying them out, amid fears that any retaliation could spark a third Gulf War.

Meanwhile US Secretary of State Mike Pompeo said Saudi Arabia has a ‘right to defend itself’ against such attacks, and America would lend its support.

Prince Faisal bin Farhan al-Saud, Saudi Arabia’s ambassador to Germany, said ‘all options are on the table’ in responding to attacks on the kingdom’s oil supply 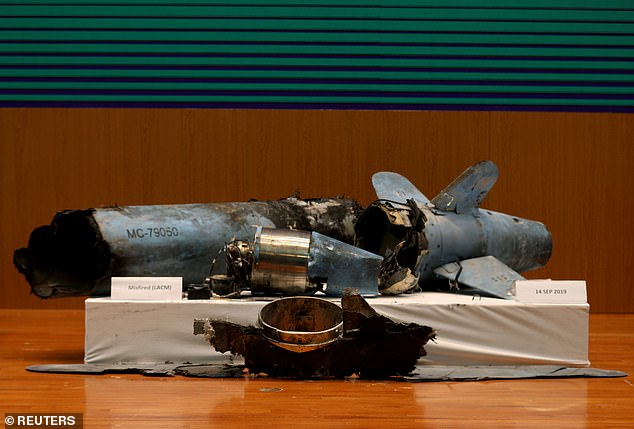 Prince Faisal refused to rule out military strikes on Iran after the kingdom pointed the finger of blame at Tehran, but said options need to be carefully discussed 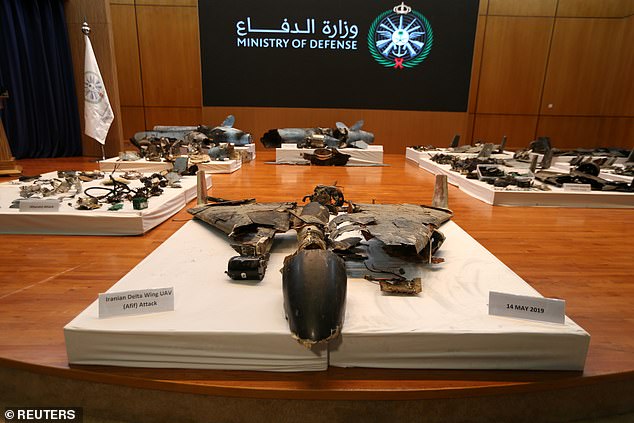 On Wednesday Riyadh presented wreckage of drones and cruise missiles fired at two facilities over the weekend, saying it showed ‘undeniable’ proof of Iranian responsibility 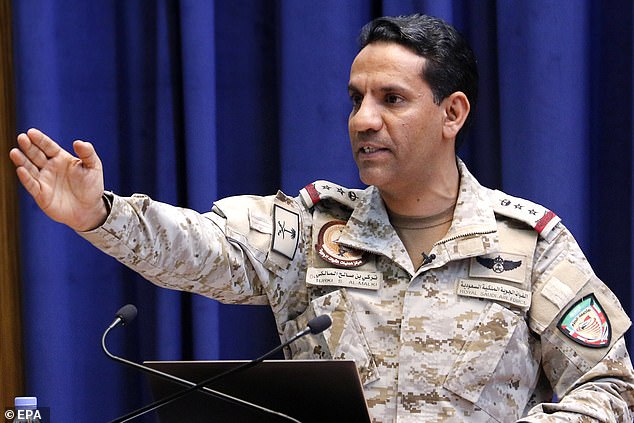 Saudi Defense Ministry spokesman Colonel Turki Al-Malik said the technology in the weapons, their likely range, and the patterns of damage seen on the ground could leave no doubt about where the attacks came from

He described the attacks as ‘unprecedented’, and added: ‘The Iranian regime’s threatening behavior will not be tolerated.’

Pompeo made the comments on Twitter Wednesday night after meeting with Crown Prince Mohammed bin Salman, who is also Saudi’s defence minister, in Jeddah.

He previously described the strikes as an ‘act of war’.

Saudi Arabia says a total of 25 cruise missiles and drones were used to attack its refinery at Abqaiq and oil field at Khurais late on Saturday.

The country’s Defence Ministry revealed wreckage of the weapons used against the two facilities on Wednesday, identifying the drones as Iranian Delta Wing aircraft.

He did not identify the cruise missiles, though online analysts said they appeared to be similar to the Quds-1, a weapon paraded by Yemen’s Houthi rebels earlier this year and based on an Iranian design.

Spokesman Colonel Turki al-Malki said the technology used, the position of damage seen on the oil facilities, and likely range of the weapons means they could not have been launched from Yemen – as Iran claims – but instead came from the north. 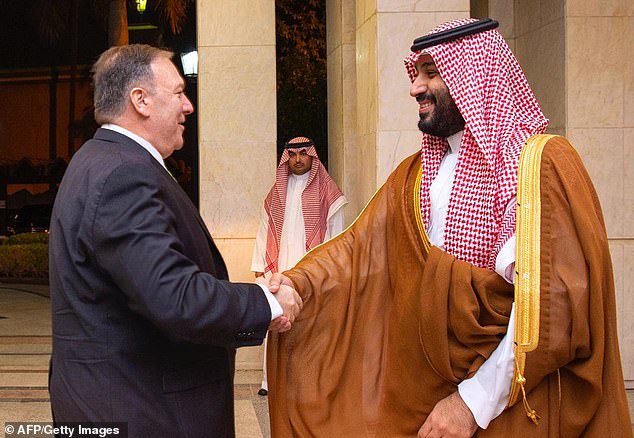 Prince Faisal spoke as Mike Pompeo met with Saudi Crown Prince Mohammed bin Salman in Jeddah, saying afterwards that the country has ‘a right to defend itself’ 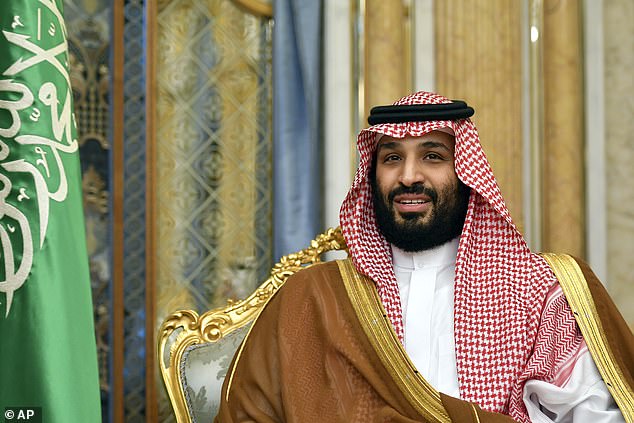 Mohammed bin Salman has previously described the attacks as an assault on the world economy, in an attempt to rally international support behind Saudi Arabia 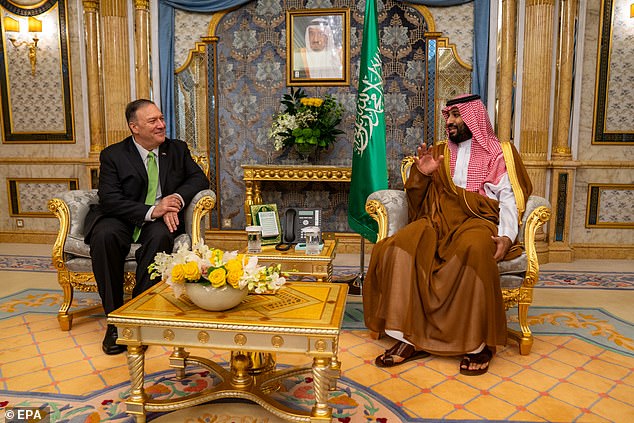 Pompeo has led calls to hold Iran responsible for the attacks, describing it as an ‘act of war’ on Wednesday and suggesting an American military response

France, which has sent investigators to Saudi to help uncover the source of the attack, also said Thursday that claims the attack came from Yemen ‘lack credibility’.

Colonel Al-Maliki admitted that Saudi Arabia has not yet pinpointed the exact launch site, but said the ultimate responsibility for the attack must lay with Iran because such weapons could only be launched with the regime’s help.

US officials say they have evidence the attack was launched from an Iranian airbase on Iranian soil, though that evidence has not yet been made public.

Washington believes the weapons were fired through southern Iraq and Kuwait – skirting around powerful radar defences in the Persian Gulf – and into Saudi Arabia before slamming into the oil facilities.

While Pompeo’s comments suggested an American military response, President Trump was less clear – saying the US has ‘many options’ in how to respond.

He said the ‘ultimate option’ for him would mean going to war with Iran and putting boots on the ground, but said the Iraq war shows it is very easy to get into a conflict but difficult to get out.

‘There’s plenty of time to do some dastardly things,’ he added.

Trump has already ordered a ‘substantial’ increase in sanctions on the Iranian regime, and is said to be favouring a limited military response that would support Saudi actions with intelligence and supplies.

Iran has warned the US that any military strike would be met with a ‘strong and crushing’ response that would not necessarily be limited to the source of the attack.

Tehran has denied any involvement in the attacks, calling such accusations ‘baseless’, and instead points the finger at Houthi rebels in Yemen, who have officially claimed responsibility. 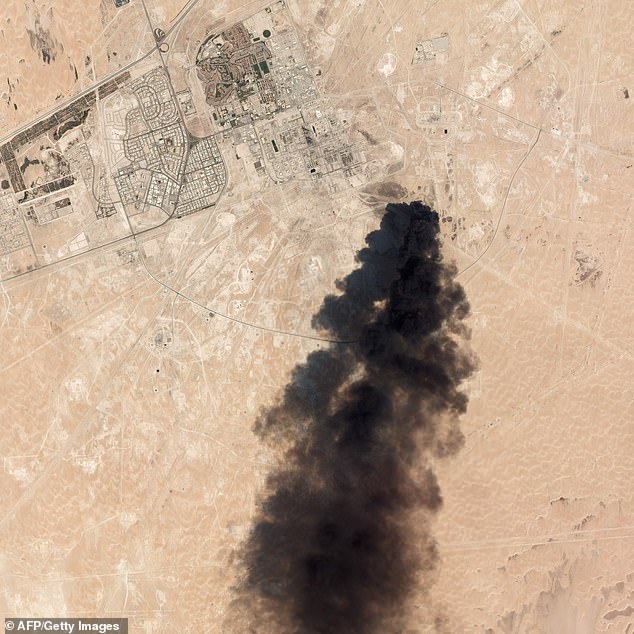 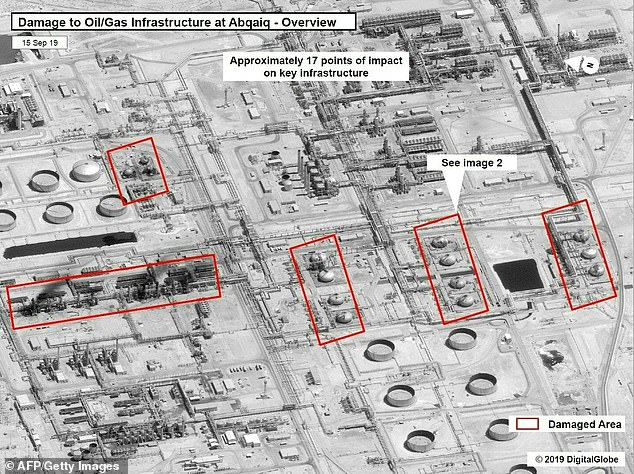 Satellite imagery released by Washington shows damage to the refinery, including gas storage tanks (show on the right) 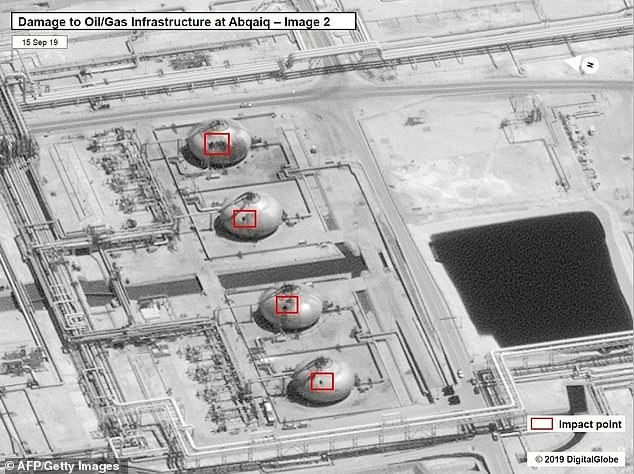 Saudi Arabia and the US says that blast-holes in the tanks suggest the attack came from the north or northwest, making Iran a more-likely source

Hassan Rouhani, the Iranian President, said Wednesday that the strike was ‘a warning’ to Saudi Arabia to stop its war in Yemen.

The Sunni kingdom is leading a coalition which has been fighting against the Houthis in Yemen since 2015, leaving hundreds of thousands dead and the country facing widespread starvation.

Houthi leaders say the attack was carried out using drones, as they have done in previous attacks on Saudi oil supplies, but analysts say Saturday’s attack shows a level of sophistication not previously seen from the group.

The UAE is a close ally of Saudi Arabia and joined the kingdom in its war in Yemen against the Houthis.

The UAE announced Thursday it had joined a U.S.-led coalition to protect waterways across the Mideast after an attack on Saudi oil installations.

The state-run WAM news agency quoted Salem al-Zaabi of the Emirati Foreign Ministry as saying the UAE joined the coalition to “ensure global energy security and the continued flow of energy supplies to the global economy.”

The U.S. formed the coalition after attacks on oil tankers that American officials blame on Iran, as well as Iran’s seizure of tankers in the region.

Iran denies being behind the tanker explosions, though the attacks came after Tehran threatened to stop oil exports from the Persian Gulf.