Saudi Crown Prince Mohammed Bin Salman has met religious leaders in New York – including two rabbis – in a rare interfaith gesture as he takes another step closer to a more moderate Islam.

The 32-year-old, who is on a three week tour of the US, is the de facto ruler of the strict Muslim county where religious iconography of other countries is banned.

However, Salman has been taking steps to take the country towards a ‘moderate Islam, open to the world and all religions.’

Saudi Crown Prince Mohammed Bin Salman (pictured at the UN in New York) has met religious leaders in New York – including two rabbis – in a rare interfaith gesture as he takes another step closer to a more moderate Islam.

‘The meeting emphasized the common bond among all people, particularly people of faith, which stresses the importance of tolerance, coexistence, and working together for a better future for all of humanity,’ the embassy said in a statement.

This is the first time Prince Mohammed has announced meeting with a Jewish religious leader.

However, previous Saudi royals have met with Jewish leaders in the past, such as the late King Abdullah who met New York-based Rabbi Marc Schneier on multiple occasions. 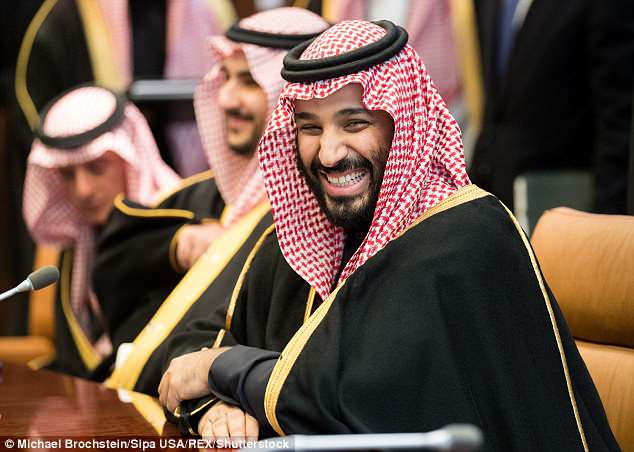 The 32-year-old, who is on a three week tour of the US, is the de facto ruler of the strict Muslim county where religious iconography of other countries is banned 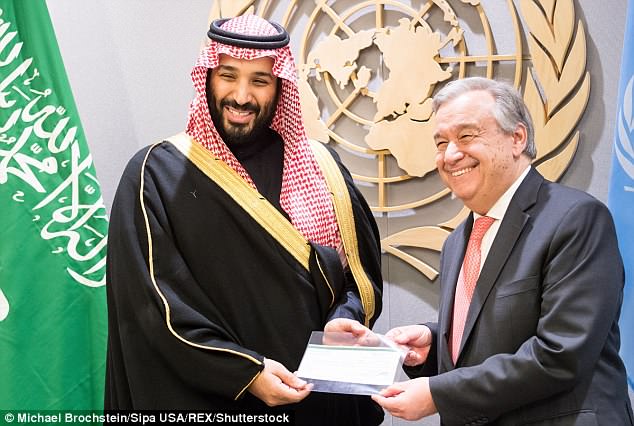 Prince Salman opened his tour of the United States on March 20 with a stop in Washington, where he met with President Donald Trump.

During the meeting, Trump said Saudi Arabia has been a great friend to the United States and is a ‘great purchaser’ and ‘investor’ in its economy.

He added that the relationship between the nations was ‘strained’ during former President Barack Obama’s tenure but that he and the crown prince have become ‘very good friends in a short period of time.’

Trump says Saudi Arabia is ‘footing a big part of the bill’ for defense in the Middle East.

During three weeks in the U.S., the 32-year-old crown prince will also meet with businessmen in New York, tech mavens in San Francisco and entertainment bigwigs in Los Angeles.

He’ll travel to Boston to meet with education leaders and to Houston to see energy executives and tour Saudi-linked oil and gas facilities on the Texas Gulf Coast.

For years, Saudi Arabia has been known as a strictly Sunni Muslim country where churches, temples and synagogues are banned and citizens are expected to adhere to strict rules about modesty. 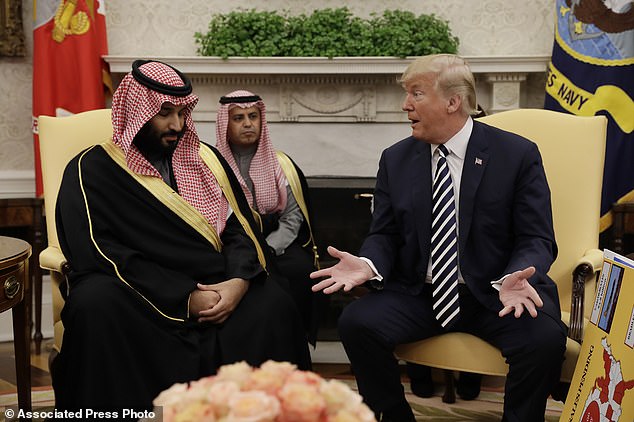 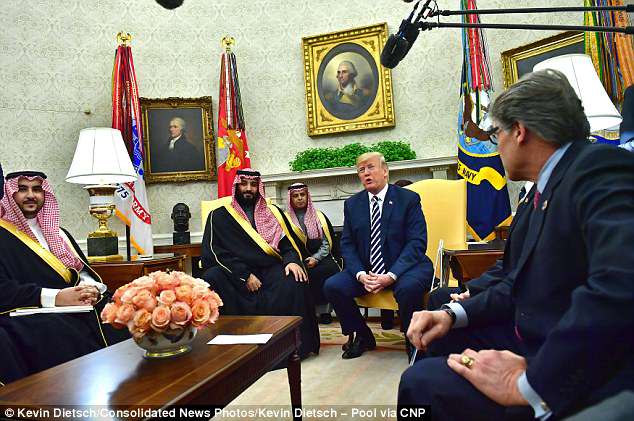 But recently, there has been a big shift in the country’s culture and economy thanks to the ambitious prince who has upended decades of royal family protocol, social norms and traditional ways of doing business.

He has been laying the groundwork for momentous social and economic changes that will take place this year, defying its conservative reputation for slow, cautious reforms.

Salman and his father King Salman bet on a young generation of Saudis hungry for change and a Saudi public fed up with corruption and government bureaucracy.

There is also a need to cut a budget deficit of at 195 billion riyals ($50 billion) caused by collapsing oil prices.

The world’s biggest oil exporter had previously been able to rely on income from it to spend lavishly to maintain its population’s standard of living and subsidize the extravagant spending of its royal princes.

The clam down on corruption has seen 200 officials detained, including one of King Abdullah’s sons, former National Guard chief Prince Miteb bin Abdullah.

He was released last month after agreeing to pay back the government $1 billion. 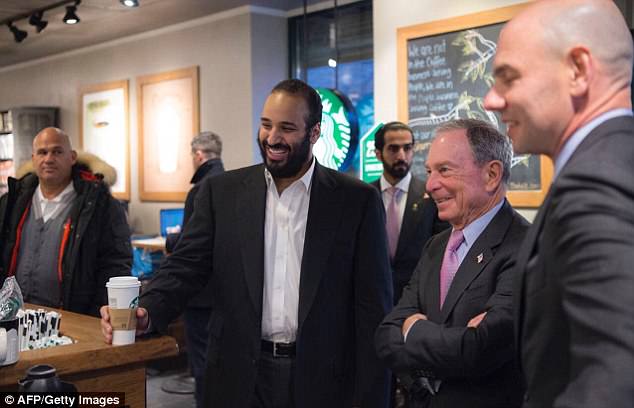 Hand-in-hand with economic reforms, the Kingdom is bringing about social changes.

A ban on women driving has been lifted and there are plans to begin issuing licenses to women, even allowing them to drive motorcycles.

This year women will also be allowed to attend sporting matches in national stadiums, where they were previously banned.

Movie theaters, shut down in the 1980s during a wave of ultraconservatism, are returning to the Kingdom.

Rapper Nelly performing in Saudi Arabia, one of many entertainers who made it to the country

Previously, Saudis could stream movies online, watch them on satellite TV or travel to neighboring countries like Bahrain and the UAE.

This past year, rapper Nelly and two Games of Thrones stars came to Saudi Arabia for the first time. John Travolta also visited the Kingdom, meeting with fans and talking to them about the US film industry.

Actors Julian Glover and Charles Dance, Grand Maester Pycelle and Tywin Lannister from HBO’s ‘Game of Thrones’, made an appearance at one as rock music blared in the halls.