Saudi Arabia’s Crown Prince Mohammed bin Salman touched down in the United States today and will kick off his seven-city charm offensive in Washington, D.C., with a meeting with President Trump at the White House Tuesday.

Trump is expected to happily greet the crown prince, as he and son-in-law Jared Kushner were supporters of Salman even before 82-year-old King Salman shook up the succession order last June, putting his 32-year-old son next in line for the throne.

Salman is meeting with a who’s who of the administration, a senior official told reporters today, including a scheduled dinner with Trump’s National Security Advisor H.R. McMaster – who’s rumored to be on his way out.

‘Our latest understanding is that in addition to White House meetings, the crown prince will meet with Secretary Mattis, Secretary Ross, Secretary Mnuchin, acting Secretary of State Sullivan, Director Pompeo and Hill leadership of both parties,’ a senior administration official said.

Prior to this trip, Trump had met with Salman in Saudi Arabia last May – after making waves by choosing the kingdom as his first ever top abroad as president. He also entertained Salman at the White House last March.

Tuesday will mark the third time Crown Prince Mohammed bin Salman (left) and President Trump (right) meet. The first time was in March before Saudi King Salman shook up the succession order and put his 32-year-old son next in line for the throne 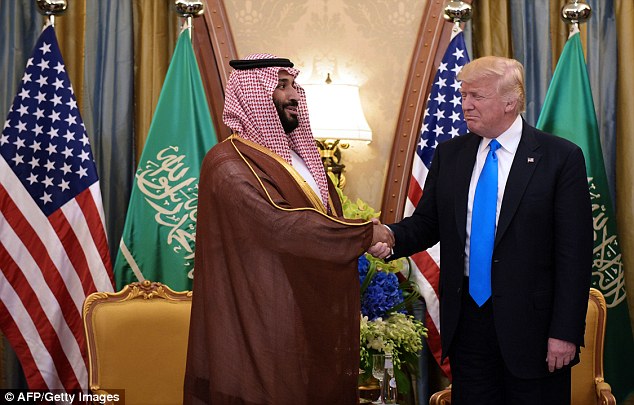 The two leaders met again after President Trump (right) decided to make Saudi Arabia his first stop abroad as president in May. A month later, the Saudi prince (left) was made the country’s ‘crown prince,’ meaning he’ll be the leader of the country should his 82-year-old father die

The crown prince has made controversial choices so far, such as locking up 200 of his country’s businessmen, including family members, in a Ritz-Carlton to send a message about corruption.

He’s both liberalized the country and consolidated power.

The crown prince, known by his initials ‘MBS,’ has pushed the kingdom to allow women certain freedoms. In June, women will be allowed to drive. They’ll also be allowed in sporting venues.

In an interview with 60 Minutes, which aired the day before Salman’s U.S. arrival, he said women were equal to men.

‘Absolutely,’ the crown prince answered. ‘We are all human beings and there is no difference.’

During the interview he also said he wished more Saudi women would work outside the home.

Salman blamed the Iranian Revolution in 1979 for his own country’s turn to ultra-conservatism, in which Saudi women saw their rights stripped away and entertainment – such as movie theaters and concerts – was banned.

‘We were living a very normal life like the rest of the Gulf countries. Women were driving cars. there were movie theaters in Saudi Arabia. Women worked everywhere,’ Salman said, ticking off how his country was in the years before he was born. ‘We were just normal people developing like any other country in the world until the events of 1979.’

But while he’s trying to move the country in that direction, Salman has also been criticized for arresting economists, clerics and intellectuals who have expressed dissent.

Asked about that by CBS’ Norah O’Donnell, Salman replied, ‘We will try to publicize as much as we can and as fast as we can, information about these individuals in order to make the world aware of what the government of Saudi Arabia is doing to combat radicalism.’

‘Saudi Arabia believes in many of the principles of human rights,’ he responded. ‘In face, we believe in the notion of human rights, but ultimately Saudi standards are not the same as American standards.’

‘I don’t want to say that we don’t have shortcomings. We certainly do. But naturally we are working to mend those shortcomings,’ Salman added.

Part of his trip to the United States will be to try and make Saudi Arabia more palatable to the American people who often associate the country, as O’Donnell pointed out in the opening minutes of her 60 Minutes package, with the 9/11 terror attack hijackers.

He’ll also face protests over the Saudis’ involvement in Yemen, with the United Nations estimating the death toll of the conflict in January to have reached 10,000.

And he’ll have to answer for the Ritz-Carlton debacle.

Salman won’t just be paying a visit to Washington and to Trump, but he’ll also make stops in New York City, Boston, Houston, Los Angeles, San Francisco and Seattle, according to CNBC.

During his first trip to Washington last year, Salman spoke to the president about his Vision 2030 program, a plan to diversity the Saudi economy making the country less dependent on its oil supply.

He’s expected to speak to Trump about the effort – and discuss the countries’ common enemy, Iran – as well as seek out American investors in hubs like New York and Silicon Valley.