Saudi missile defences intercepted seven Yemeni missiles on Sunday including over the capital Riyadh, the military has said.

One Egyptian was killed and two of his countrymen injured when shrapnel fell into the streets of the Saudi capital,  according to authorities.

Iran-backed Houthi rebels said they fired three missiles at the airport in Riyadh and four others at the southern cities of Khamis Mushait, Jizan and Najran.

Dramatic video showed patriot missiles being fired into the sky in Riyadh. 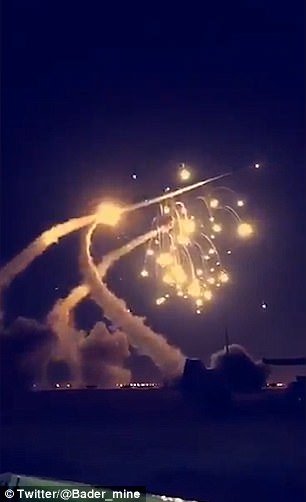 Seven missile were fired by Iran-backed Houthi rebels from Yemen into Saudi Arabia overnight, with the kingdom’s military claiming to have shot down all seven

However, one video showed a rocket which appeared to malfunction and slam back into the city.

Other video showed a missile landing in the middle of a highway, with the wreckage pictured on social media afterward. It was unclear if this was a Saudi missile, or one fired by the Houthis.

The attack came on the third anniversary of the Saudi-led coalition’s intervention in Yemen.

‘This aggressive and hostile action by the Iran-backed Houthi group proves that the Iranian regime continues to support the armed group with military capabilities,’ coalition spokesman Turki al-Malki said.

‘The firing of multiple ballistic missiles towards cities is a serious development.’

The Houthi -run Al-Masira television channel claimed the rebels had targeted Riyadh’s King Khalid International Airport as well as other airstrips in the south.

The strikes come after the US defence secretary last week urged Saudi Crown Prince Mohammed bin Salman during his visit to Washington to pursue ‘urgent efforts’ to end Yemen’s conflict.

The Houthi rebels have fired dozens of missiles into Saudi Arabia since last year, all of which Saudi forces claim to have intercepted, though doubts have been raised over several of the claims.

Last night’s attack underscores the capacity of the rebels to strike deep within Saudi amid a stalemated war in Yemen.

The latest attack could further escalate the coalition’s military campaign.

A major attack targeting Riyadh international airport on November 4 triggered the tightening of a Saudi-led blockade of Yemen – already on the verge of famine. 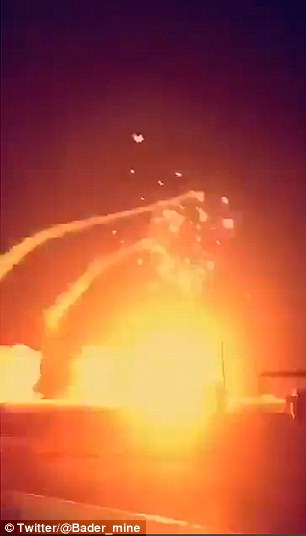 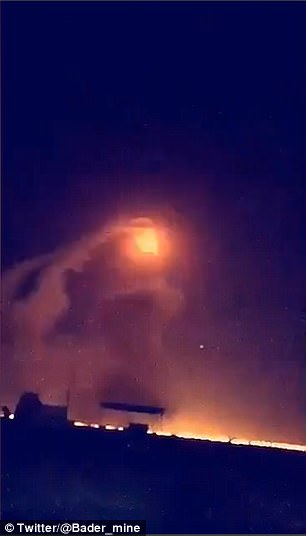 Video showed Saudi defence missiles being fired over Riyadh, though other footage appeared to show a missile malfunctioning and slamming back into the city 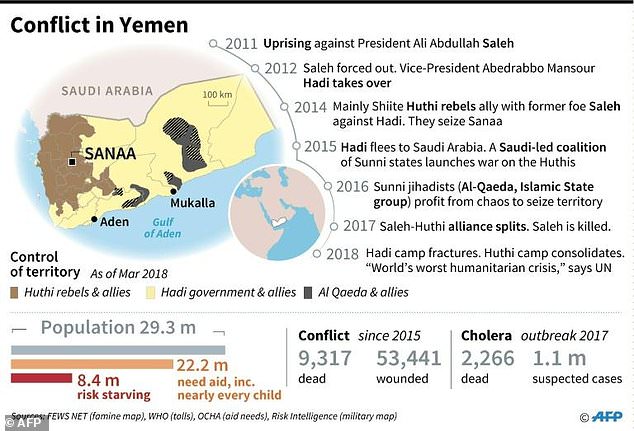 The attack came on the third anniversary of Saudi Arabia’s intervention in the Yemen conflict, which the UN says is the world’s worst humanitarian disaster

Saudi Arabia has accused its arch foe Iran of supplying the missile to the rebels, a charge Tehran strongly denied.

The Houthis expelled pro-government forces from the capital in September 2014 and went on to seize swathes of the impoverished Arabian peninsula country.

This prompted a military coalition led by Saudi Arabia to intervene in Yemen on March 26, 2015, to help the government push back the Shiite rebels.

Since then, around 10,000 people have been killed and 53,000 wounded in Yemen, triggering what the United Nations has called the world’s worst humanitarian crisis.

Houthi rebel chief Abdelmalik al-Huthi on Sunday said his fighters were ready to make more ‘sacrifices’ against the Saudi-led coalition, in an address marking the war’s third anniversary.

The Houthis plan a huge rally in Sanaa on Monday to mark the anniversary.

The UN says living conditions in the war-scarred country have reached catastrophic levels and that 8.4 million people face imminent famine.

The UN urgently needs $350million for humanitarian projects in Yemen, a senior agency official said on Sunday, insisting it was mere ‘peanuts’ compared with the cost of the country’s war.

Saudi Arabia and its allies – aided by billions of dollars worth of military equipment from the US and Britain – could stand guilty of war crimes, Amnesty International said on Friday.

Numerous rounds of UN-sponsored peace talks have failed to stem the bloodshed in Yemen.