Two Middle East leaders have been boasting that they are behind the firing of US Secretary of State Rex Tillerson, according to a source close to the Arab princes, DailyMail.com can disclose.

Tillerson learned he had lost his job after President Donald Trump tweeted the news on Tuesday last week.

Salman, who visited Trump in the Oval Office of the White House on Tuesday, told friends that he made a deal that Tillerson would be removed from his position during meetings with Trump’s son-in-law Jared Kushner last year.

Mohammed bin Salman, the crown prince of Saudi Arabia told friends that he made a deal that Rex Tillerson would be removed from his position during meetings with Trump’s son-in-law Jared Kushner last year 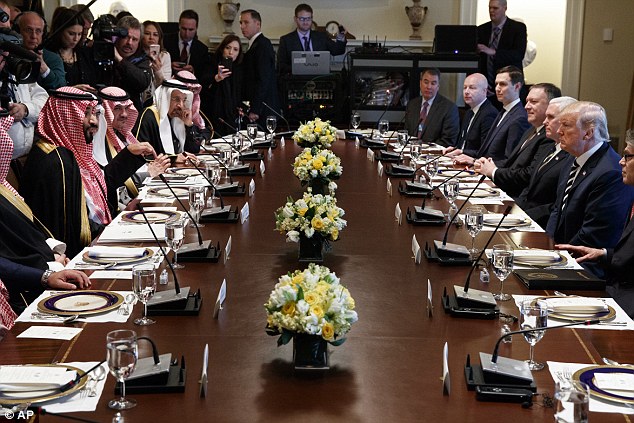 Kushner made a secret trip to Riyadh last year and met with Salman. Kushner (right side of table) and Salman (left) are pictured above during a working lunch in the Cabinet Room of the White House on Tuesday 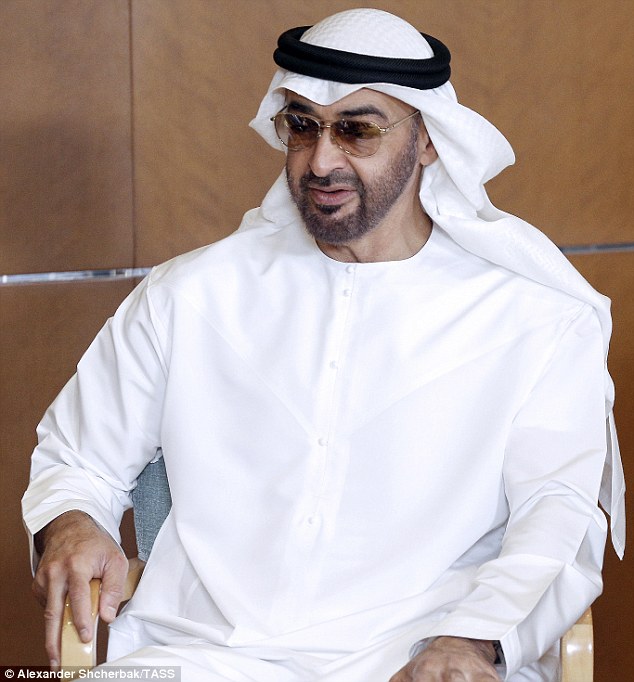 De-facto UAE ruler Zayed, seen in diplomatic circles as a mentor to 32-year-old Salman, has also been ‘gloating’ to his inner circle that he is responsible for replacing the secretary of state 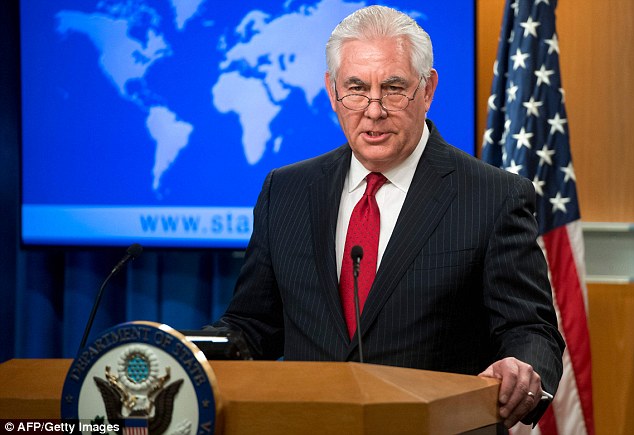 ‘MBS [Mohammed bin Salman] is claiming that firing Tillerson was one of his requests to Trump via Kushner to be implemented before his visit to the US and it appears that he got what he wanted,’ said a source close to the crown prince.

The outgoing secretary of state was in favor of a nuclear deal with Iran, curbing its nuclear program in exchange for sanctions relief – much to the dismay of its bitter enemies Saudi Arabia and the UAE.

He also drew the ire of the two regimes after he pushed for an end to their land, sea and air blockade of their neighboring Gulf state Qatar over claims that the county sponsors terrorism.

Tillerson attempted to broker talks between the three Arab countries during a visit in October after four months of the blockade but gave up when he made no progress with Salman, telling reporters: ‘We cannot force talks upon people who are not ready to talk.’

‘It p***ed off MBZ [UAE leader Mohammed bin Zayed] that Tillerson went to Doha and made that statement,’ said the palace source.

‘Every time they want to take aggressive action Tillerson calms things down, because he’s thinking as a former businessman who runs an oil company, not as a general in the army.

‘He managed to convince [Defense Secretary James] Mattis with his own point of view, not allowing MBS and MBZ to control the White House through Kushner.

‘That scared MBZ, so they tried everything in their power to make Kushner pass on the message that Tillerson needs to be removed.’

A second Saudi palace source – who is not in MBS’s camp – said: ‘We know UAE and the Kingdom of Saudi Arabia wanted rid of him because they couldn’t manipulate him when it came to Qatar. He saw through them.’

Kushner made a secret trip to Riyadh the same month, just days before Salman made a power grab by arresting several members of the royal family. 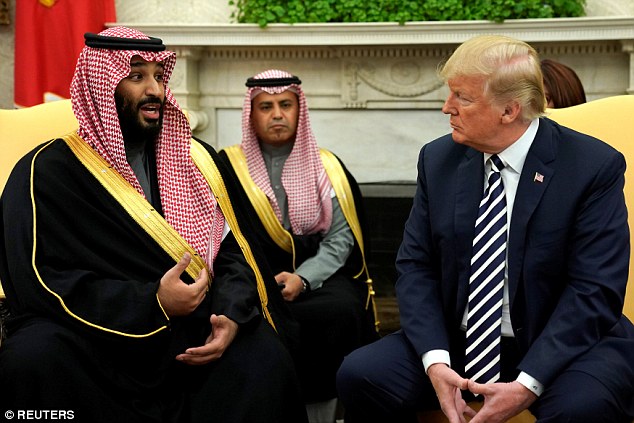 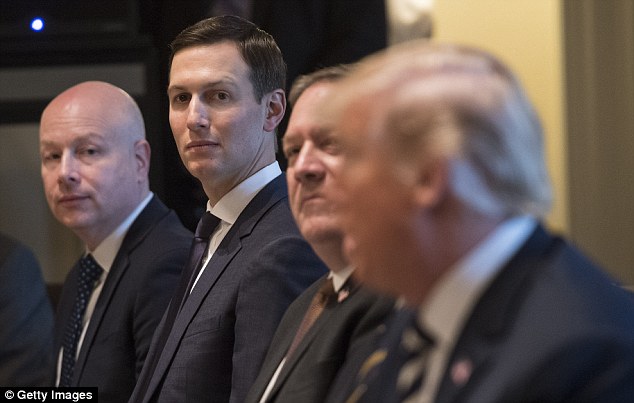 The first Riyadh palace source claims Salman was so keen to remove Tillerson he demanded it as part of diplomatic negotiations with Kushner that month.

Salman is not the only Arab leader claiming credit however.

De-facto UAE ruler Zayed, seen in diplomatic circles as a mentor to 32-year-old Salman, has also been ‘gloating’ to his inner circle that he is responsible for replacing the secretary of state.

‘MBZ [Mohammed bin Zayed] is gloating to every member in the Gulf ruling families that he was the mastermind behind firing Tillerson,’ said a source close to the UAE ruler.

‘History will remember that an Arabian Gulf country played a role in getting the American foreign minister fired,’ he wrote.

A source close to Hamad al Mazroui, Zayed’s de facto head of intelligence, said the spymaster was also gloating about the firing.

‘Hamad al Mazroui was saying to us “our boss removed Tillerson”. He was bragging about it. He said, “If we remove the foreign minister of the United States that fast, we can do anything”.

‘Tillerson was removed thanks to the major efforts MBZ put in. MBS just added the last touch,’ the source added.

Top Trump donor Elliott Broidy, who has millions of dollars of security contracts with the Emirates, was exposed campaigning for Tillerson to be dismissed within the White House.

In a leaked memo of Broidy’s meeting in October with the President, Broidy said he told Trump that Tillerson was ‘performing poorly and should be fired at a politically convenient time’.

Broidy laid into the secretary of state in the memo, describing him as ‘weak’ and a ‘tower of Jello’ that ‘needs to be slammed’.

During the meeting, Broidy also suggested Trump meet with Zayed to discuss setting up a regional counterterrorism force.

The memo was sent to George Nader, a shadowy adviser to the UAE with links to the Trump administration.

The source close to Zayed said Nader had been specifically tasked by the Emirati prince to lobby for Tillerson’s removal.

‘Part of the mission George Nader was assigned, was doing that, through Broidy, who passes on messages to high-ranking Republicans, who try to convince Trump to expedite the removal of Tillerson,’ said the source.

A spokesman for Broidy said his emails were hacked by Qatar to ‘punish Mr Broidy for his strong opposition to state-sponsored terrorism,’ though Qatar denies the claim.

A State Department official has said that Tillerson and CIA Director Mike Pompeo – the man President Donald Trump has chosen to replace him – are planning a meeting at the department’s headquarters.

The official wasn’t authorized to comment by name and demanded anonymity.

It’s the first known meeting between the two men since Trump fired Tillerson on Twitter and announced he was nominating Pompeo to replace him.

Pompeo also plans to meet Monday with Senate Foreign Relations Committee Chairman Bob Corker of Tennessee. Corker’s committee will eventually vote on whether to confirm Pompeo before his nomination goes to the full Senate.

Tillerson has already handed over all authorities to his deputy but remains secretary in name only until March 31.

Meanwhile, Salman said during his Tuesday meeting with Trump that the United States and Saudi Arabia could tackle ‘a lot of things’ together in the future. 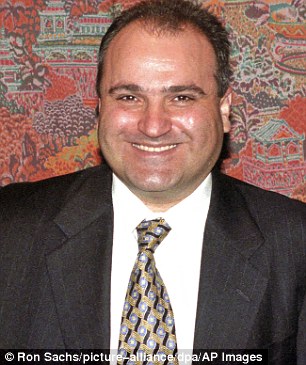 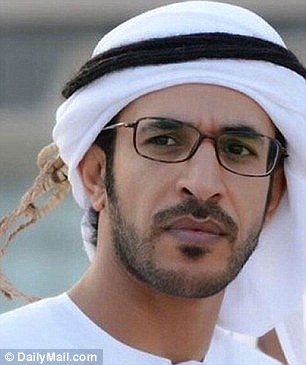 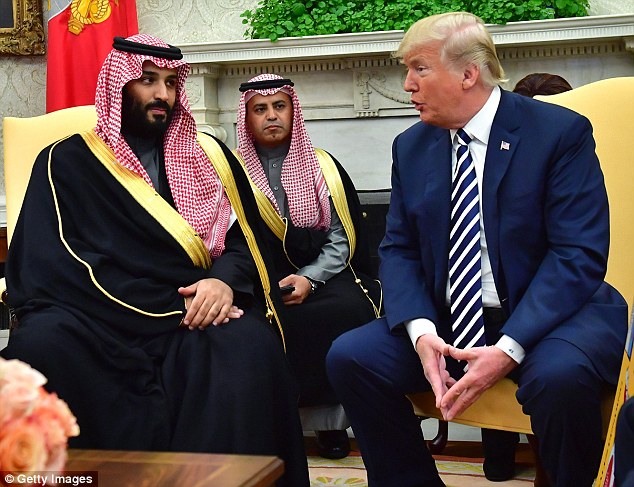 He praised ‘very deep’ relations between the two countries during his first stop on a three-week tour of the United States .

It is his first visit to the White House since he cemented his role as the kingdom’s de facto political leader and embarked on economic and social reforms long sought by the west.

Trump, touching on the sensitive shaking out happening inside the kingdom, said ‘some tremendous things have happened since your last visit to the White House’.

Speaking in English, the son of King Salman and heir to the throne, pointed out significant Saudi investments in the United States.

In front of the cameras, it was all back-slapping, handshakes, smiles and warm words between Trump and Salman.

‘It is an honor to have the crown prince of Saudi Arabia with us,’ Trump said as the pair prepared to have lunch in the Cabinet Room.

‘The relationship is probably the strongest it’s ever been – we understand each other.’

‘Saudi Arabia is a very wealthy nation and they are going to give the United States some of that wealth hopefully, in the form of jobs, in the form of the purchase of the finest military equipment anywhere in the world,’ Trump said.

After his visit to Washington, Salman will embark on a nationwide tour, visiting New York, Boston, oil hub Houston, Los Angeles and Silicon Valley. He is expected to remain in the United States through the first week of April.