A Saudi teenager who was granted asylum in Canada has revealed she has a black boyfriend as she spoke out about the Black Lives Matter protests that have rocked the U.S. over the past week.

Rahaf Mohammed made International headlines last year after she barricaded herself in a hotel room in Thailand to avoid being sent back to Saudi Arabia.

After a week in limbo, Ms Mohammed was handed over to the US refugee agency and resettled in Canada. She has spent the past year enjoying the freedom in her new home and raising awareness for the plight of women in her conservative homeland.

She took to social media over the weekend as protests – some of which erupted into violence – rocked cities across the U.S. following the death of George Floyd, a black man, in Minneapolis police custody.

In a recent social media post Rahaf Mohammed shared her love for her boyfriend: ‘Je t’aime mon amour’ (I love you my dear) 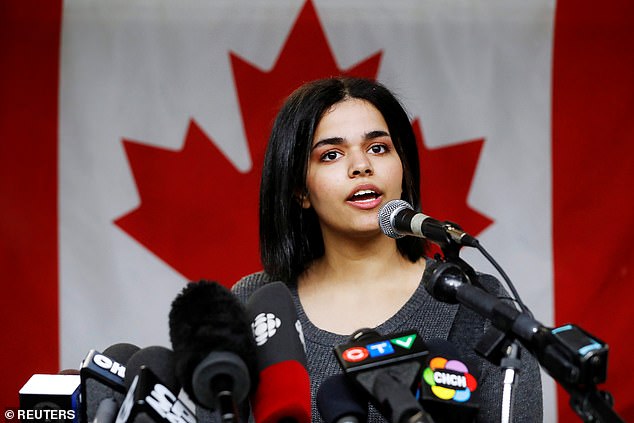 Ms Mohammed revealed that she is in a relationship with a black man, but explained that wasn’t the reason she was speaking up about the protests.

‘It’s basic human rights. I have a black partner but that is not the reason i choose to speak up about the injustice towards black people, it’s always about human rights. Black lives matter today, tomorrow and always.’

Ms Mohammed also shared a photo of herself in an embrace with her partner in a post on Snapchat. 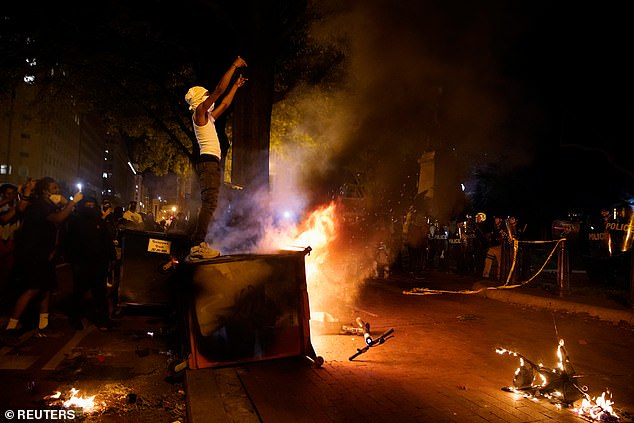 ‘Je t’aime mon amour,’ she wrote in a caption alongside the picture. In another caption in Arabic, Ms Mohammed said she was grateful that he had come into her life.

Ms Mohammed also recently spoke out about the struggle of Saudi women as the UK and other nations went into lockdown to slow the spread of coronavirus.

‘Since y’all forced to be at home, just imagine their lives,’ she wrote in response to a tweet that said many Saudi women have lived their entire life in quarantine.

‘They’re not allowed to go to the hospital, supermarket, visit friends, the mall, parks, or even just walk outside their homes?’ The tweet added. 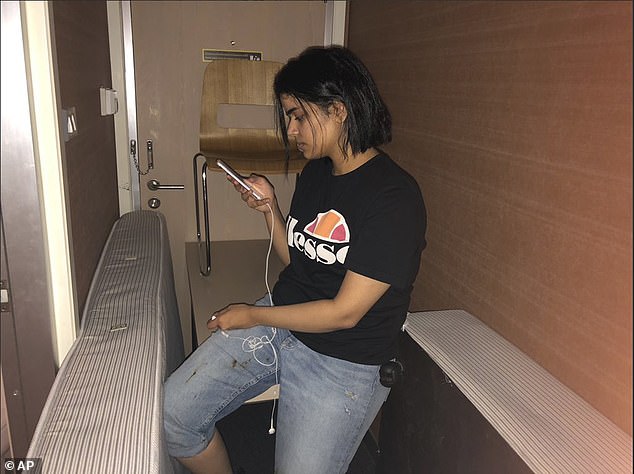 Ms Mohammed’s plight made headlines around the world in January 2019 as she posted on social media about being barricaded in her hotel room at the international airport in Bangkok, Thailand (pictured)

Ms Mohammed left her family while visiting Kuwait and flew to Bangkok in January last year.

When she was denied entry into Thailand, she barricaded herself in an airport hotel room to avoid deportation and appealed for help on Twitter, quickly amassing a large following. She said she feared for her life, but her family have denied abusing her.

In a press conference after he arrived in Canada, Ms Mohammed said she wanted to work in support of freedom for women around the world.