This is the shocking moment a woman in Saudi Arabia attacked a chef in a restaurant with karate kicks after first throwing her shoe at him.

The man – believed to be working at the Abu Zaid diner in Jeddah – was called from his kitchen to confront the angry customer, dressed all in black.

Without warning, she hurls her footwear at him – which, in Middle Eastern culture, is seen as an incredibly offensive insult.

With lightning-quick reflexes, he ducks to avoid it but is not so lucky  when she launches phase two of her assault. 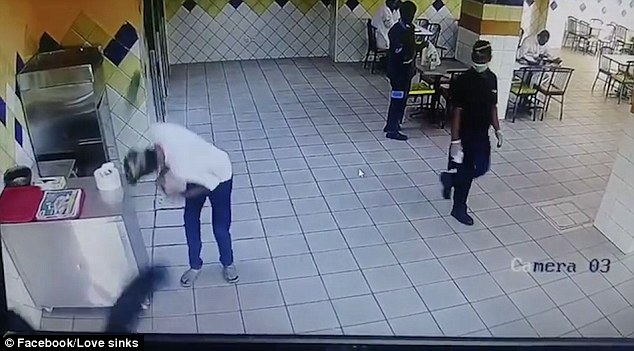 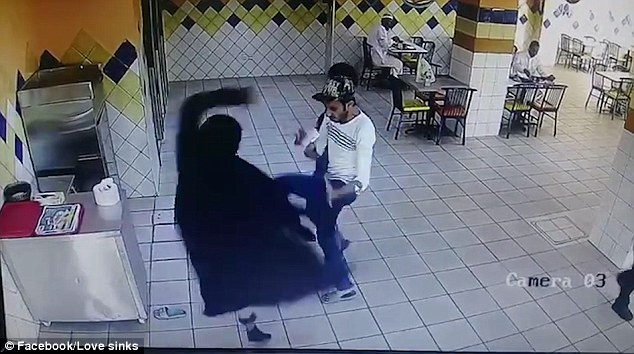 Without warning, the woman kicks the man in his stomach, sending him reeling back – and then kicks him again

She immediately executes a ninja-like kick to his stomach, which pushes him backwards as his colleagues look on in amazement.

She kicks him again and then swings her arm wide before throwing a punch, narrowly missing both the chef and a co-worker.

After one final half-hearted kick in his direction, she points her finger as if to scold him.

The clip, which was posted on Liveleak, doesn’t make clear why she was so angry.

One would assume it was not to do with the quality of the food, which has a 4.5 star rating on TripAdvisor.

In 2014, several restaurants in Saudi Arabia banned single women from entering because of their ‘mentally unstable’ behaviour such as flirting, smoking and using mobile phones. 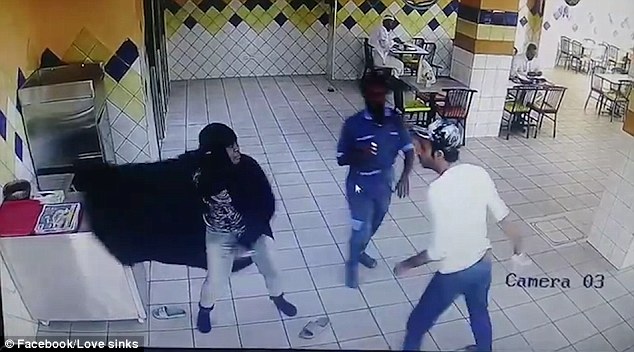 The irate lady then tried to punch the man, while a co-worker looked on in amazement

A number of eateries put up signs that said ‘women are not allowed’ – in a blow for women’s rights in the ultra-conservative Muslim kingdom.

There is no law banning women from travelling alone in Saudi Arabia but deeply-held religious beliefs dictate that they should be accompanied by a male family member when out in public.

The country has recently started to loosen its rules, including allowing women to drive – having been the last country in the world to forbid it – and hosting a mixed-gender national day. 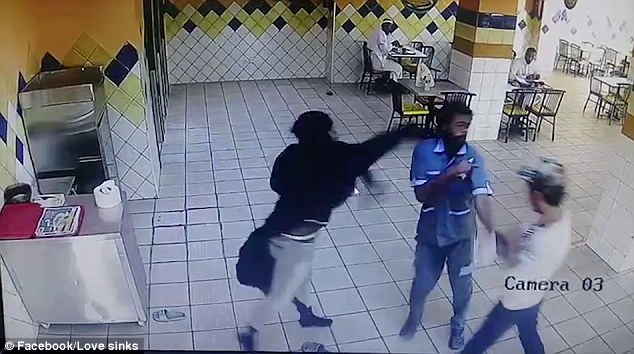 As she wildly swung her arm, she narrowly avoided making contact with both of the men