The drug lord who succeeded El Chapo has spent a decade infiltrating his drug operation in the US, a new investigation has found.

Officially Reuben ‘Nemesio’ Oseguera Cervantes, and better known as ‘El Mencho’, the ruthless leader of Cartel Jalisco Nueva Generacion has managed to bring his illegal narcotics into 35 states, according to the findings of the probe.

Plus, the cartel has placed at least two dozen ‘cells’, as described by the US Drug and Enforcement Administration, that set up shop to do business and even live in American communities.

Officially Reuben ‘Nemesio’ Oseguera Cervantes (pictured), and better known as ‘El Mencho’, the ruthless leader of Cartel Jalisco Nueva Generacion has managed to bring his illegal narcotics into 35 states, according to the findings of the probe 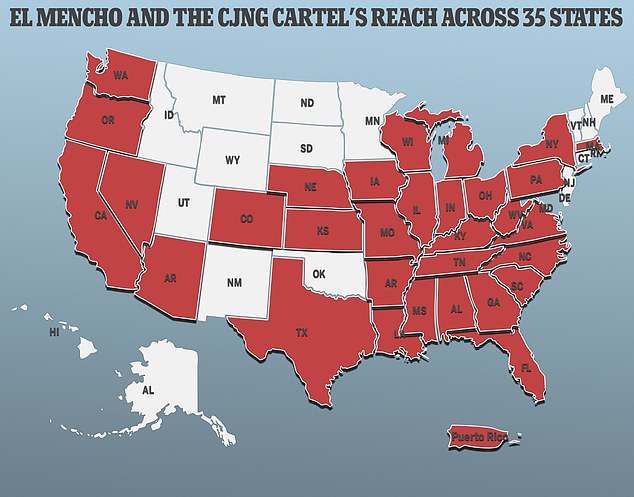 The map above shows the reach where the reach of El Mencho’s Cartel Jalisco Nueva Generacion, or CJNG in to the US, according to the results of a new investigation that placed at least two dozen ‘cells’ that set up shop to do business and even live in American communities

That has contributed to the 300,000 lives lost to illegal drug use since 2013, reports the Louisville Courier which did a nine-month long investigation on the cartel and it impact on small-town America.

Cervantes picked up where the infamous Joaquin Guzman, formerly El Chapo, left off after the 63-year-old received a life sentence on July 17 for drug trafficking offenses and was given an additional 30 years for firearms offenses.

Soon after El Chapo’s conviction, the DEA made Cervantes, 53, its top priority. He is on the agency’s most wanted list and has a $10 million reward on his head.

El Mencho’s drug syndicate is alleged to be the source of thousands of kilos of methamphetamines, heroin, cocaine and fentanyl that comes into the US every year.

The Courier’s investigation tracks how the cartel, also known as CJNG, has spread across the US, overwhelming cities and small towns.

The cartel has waged its war with a billion-dollar criminal organization, equipped with its own uniformed army, control of drug routes throughout the US, money-laundering and a digital terror campaign, federal drug enforcement officials tell the Courier. 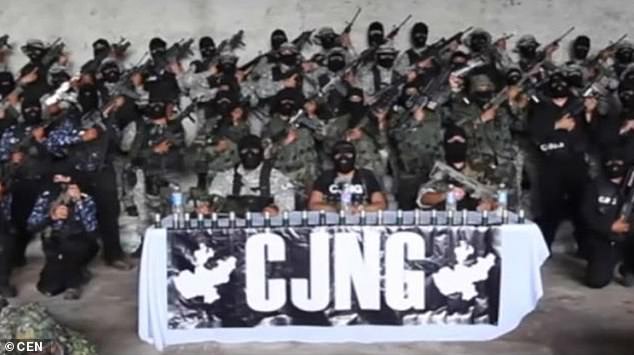 The CJNG cartel has waged its war with a billion-dollar criminal organization, equipped with its own uniformed army 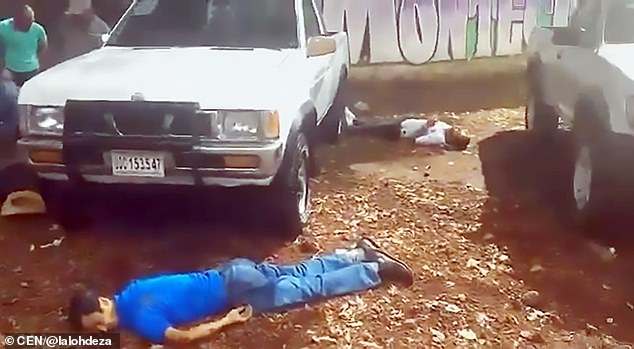 In Mexico, the brutal cartel conducts business with beheadings, public hangings, acid baths, and has even resorted to cannibalism. Victims of a cartel-related shooting are pictured after a gunmen reportedly opened fire on random individuals in a bullring car park

In Mexico, the brutal cartel conducts business with beheadings, public hangings, acid baths, and has even resorted to cannibalism. Images of the carnage fuel social media posts, which the CJNG uses to roll  out its digital terror campaign.

In the US, the cartel’s network crisscrosses the country, from Seattle suburbs, to beach communities in Mississippi and South Carolina; from California’s coastline to to the mountains of Virginia; from small Iowa farming towns to Nebraska, and across Kentucky, in places like Lexington, Paducah and Louisville.

A cartel member was even found working at the Calumet Farm, a stable producing Kentucky Derby and Triple Crown winners. 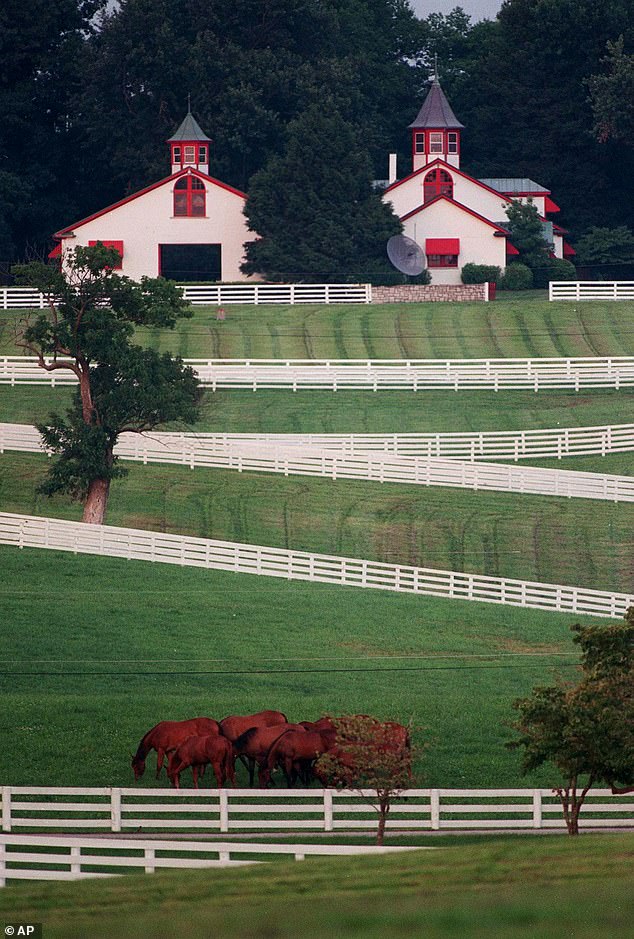 A cartel member was found to have been working at the Calumet Farm (pictured), a stable producing Kentucky Derby and Triple Crown winners 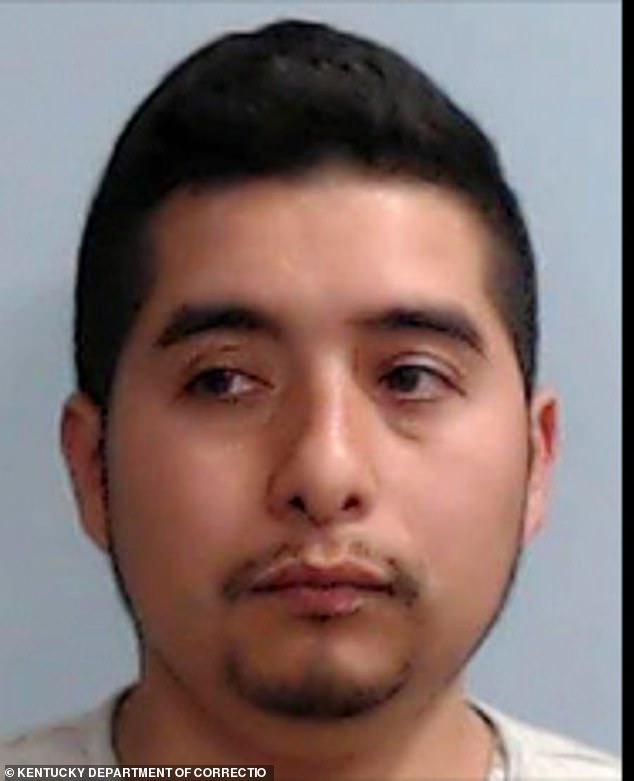 Federal records reveal that Ciro Macias Martinez was working as a horse groomer by day and overseeing the flow of $30 million of drugs into the state by night before he was jailed for meth trafficking and money laundering in 2018.

The cartel has managed to smuggle this level of drugs into the US from Mexico by concealing them in large vegetable trucks.

The operation can deliver five tons of cocaine and five tons of meth every month without detection, according to DEA estimates, and there are no signs the trafficking is slowing down.

Chris Evans, the DEA’s chief of operations, warns that growing El Mencho’s drug empire ‘is putting poison on the streets of the US’.

El Mencho’s drug operation can deliver 5 tons of cocaine and 5 tons of meth every month without detection, according to DEA estimates, and there are no signs the trafficking is slowing down. Pictured are seized illegal narcotics from a drug trafficking investigation

‘It’s important for all Americans to understand the threat to their community and what might impact their every day lives’, he tolls the Courier.

Officials can’t say how much El Mencho is responsible for in the drug trade, but they warn CJNG will become known as the world’s most powerful drug organization, stripping the title from rival Sinaloa Cartel.

CJNG has done this by pumping deadly synthetic opioid fentanyl across US communities, unseating heroin as the nation’s No. 1 killer.

The cartel going into each new community relied on local traffickers who were located in communities where they blended in to sell drugs, regardless of race or ethnicity, the Courier investigation found.

‘If it’s coming from a cartel, they could have sold a pound to Asians, black guys, outlaw motorcycle gangs, white trash’, said Lieutenant Jeremy Williams, of the Ashe County Sheriff’s Office in North Carolina.

The lawman testified in a case that convicted a trafficker connected to CJNG in 2014.

‘Once the cartel brings a huge load across (the border) and throws it out there for everyone to sell, it’s out of their hands. They’ve got their money’, Williams said.

El Mencho’s cartel has more than 5,000 members around the globe, who ‘want to control the entire drug market’, Matthew Donahue, who oversees foreign operations for the DEA, tells the Courier. 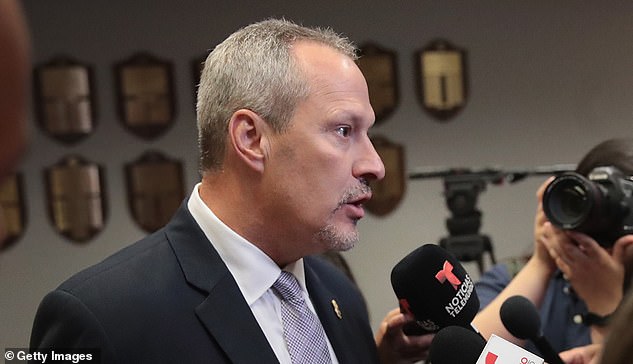 El Mencho’s cartel has more than 5,000 members around the globe, who ‘want to control the entire drug market’, sayys Matthew Donahue (pictured), who oversees foreign operations for the DEA

‘If that takes them killing other cartels or killing innocent people, they will do it’, he says.

While officials like Donahue expected the cartel to grow operations in key cartel hubs in the Southwest, as well as other major corridors around Atlanta and Chicago, the Courier’s investigation located cells CJNG operatives were living.

One resided in a luxury condominium near downtown Nashville, another in a Hollywood hi-rise apartment off Sunset Boulevard.

And there were cartel members living what appeared to be quiet lives on tree-lined streets in Cairo, Ilinois, Johnson City, Tennessee, and Kansas City, Missouri.

The investigation even spotted a cell setting up in south-central Virginia, where it had purchased several homes in Axton, an unincorporated area of only 6,500 residents.

That news came as a surprise even to a cartel investigator in Mexico.

‘What are they doing out in the middle of nowhere’? the investigator asked his team, and requesting anonymity when he spoke to the Courier to protect his work.

Upon hearing more details about the way the cells had sprouted up around America, the investigator responded, ‘It’s a strategy’.

Members of El Mencho’s cartel have settled with relatives who left Mexico for the US to find work.

‘That’s what the CJNG does, exploit its connections to family,’ says Dan Dodds, head of DEA operations in Kentucky.

Court records also reveal how the cartel also recruits migrants desperate for money as cash couriers and for money laundering. In one example, a waitress who needed to pay for dental courses made bank deposits that she didn’t know were for the CJNG, court transcripts show.

The woman involved her older sister, who was already a struggling single mom, and now both are in jail for money laundering. The sister, who has two children living in Kentucky, also faces deportation.

Resisting the CJNG outright brings the possible threat of violence, the investigation found. The cartel has threatened migrants living in the US to cooperate, and has also resorted to violence against their relatives back home in Mexico.

In Paducah, Kentucky, a business owner who was behind on his drug debt was told by the cartel to pay up, or ‘If we don’t get our money, we’re going to kill your family’, recalled investigators.

The CJNG’s movement into smaller, unsuspecting communities gained significant traction about five years ago, as intelligence analysts tracked the cartel’s movements beyond border towns and major hubs, the Courier reports.

That meant smaller towns and smaller law enforcement agencies being added to the list of places now under siege in America’s drug war, as well as more unchecked opportunities to expand on the illegal drug trade.

‘Big cities have big police departments and DEA, FBI and (Homeland Security Investigations) and an ability to look at intelligence and focus on their cells and contacts’, the DEA’s Donahue told the Courier.

‘But it’s a little different when you go to Boise, Idaho, and other small towns where they don’t have the resources to really focus on an international cartel’.

Americans who may not know of CJNG today should take note, says Dodds, the head of DEA operations in Kentucky.

‘I promise, you will hear more about El Mencho’. 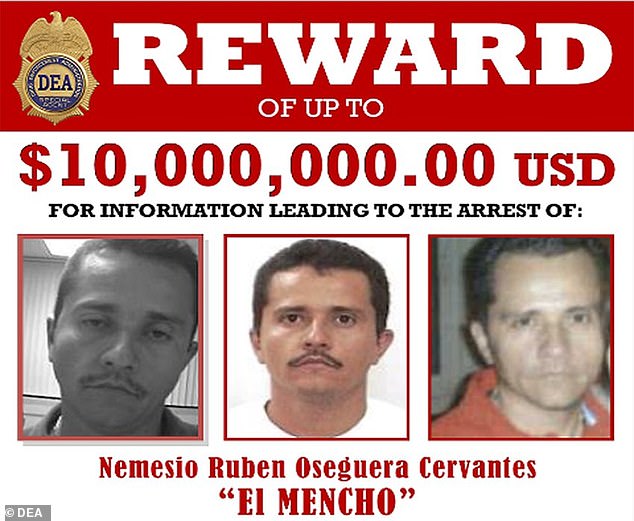 El Mencho is the DEA’s top priority after Joaquin Guzman, formerly El Chapo, received a life sentence on July 17 for drug trafficking offenses and was given an additional 30 years for firearms offenses. As a result, a $10 million reward hangs over El Mencho’s head