A pack of wild dogs attacked a pet alpaca called Chiff leaving residents afraid to the leave their homes.

Chiff was attacked last month in the back garden of his owner’s Tallebudgera Valley home, near the Gold Coast, Queensland.

Neighbours heard Chiff screaming at 6am before they saw a pack of five wild dogs ‘tearing the animal to shreds,’ according to the Gold Coast Bulletin.

The alpaca suffered horror injuries and the dogs completely tore off one section of skin on one of its hind leg.

Chiff’s owner said they had become increasingly concerned about wild dogs in the area and feared it would only be a matter of time before they attacked someone.

‘I have known they were around the place but we have never had any animals attacked by them,’ she said.

‘My biggest concern has been the kids, one of the dogs we captured on the camera following my son walking down the driveway – I was just a little way in front of him.’

Banana farmer Brian Luxton said the dogs have become more bold and aggressive in their behaviour.

‘If I go up the top patch, I carry a rifle, because you just can’t trust a pack of wild dogs. 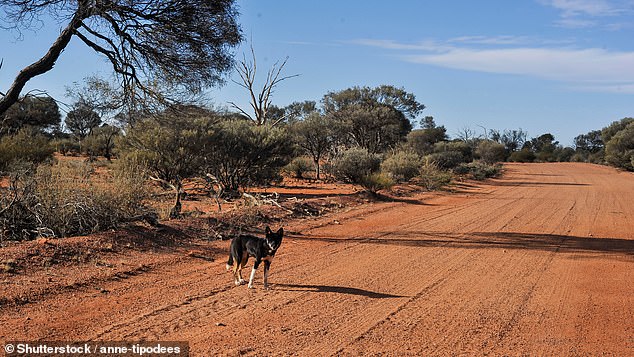 Gold Coast City Council said in a statement that it monitors wild dogs in the area but it had not noticed their numbers increasing.

‘Council implements a program to monitor and trap wild dogs on Council property,’ a spokesperson said.

The spokesperson said the council provides support to residents by loaning traps and giving advice on how to deal with wild dog issues.

‘Council’s Vector and Biosecurity Services will continue to monitor the situation in the Tallebudgera Valley area and will respond appropriately,’ they said.