The Today Show’s Savannah Guthrie and Hoda Kotb have been taking in England and ‘practicing the royal wave’ ahead of NBC’s anticipated coverage of Prince Harry and Meghan Markle’s wedding.

The co-hosts shared snippets of all of the fun they’re having across the pond to their social media accounts on Saturday, before Kotb went on to join another Today Show staple in Florence, Italy.

The two will reunite for NBC’s live coverage of the royal wedding from a site overlooking Windsor Castle beginning on May 18, with the rest of their team close by.

Harry and Meghan’s wedding date has been set for May 19, with vows to be exchanged at St George’s Chapel at the castle, starting at 12pm BST (7am Eastern).

‘We are all heading to England to bring you the excitement of the royal wedding,’ Kotb said while on the air on April 11.

Guthrie and Kotb were certainly living it up while preparing for their roles in bringing the royal wedding to the rest of the world.

‘Just another day at Windsor Castle with @hodakotb,’ Guthrie wrote with a photo of her and her buddy, posing in front of the official residence of Queen Elizabeth II, who turned 92 on Saturday.

Both Guthrie and Kotb wore pastel, floral lace and basked in the British sunshine.

Guthrie also shared a solo pic, smiling wide while donning a signature headpiece associated with the United Kingdom’s royal events and holding a glass of champagne. 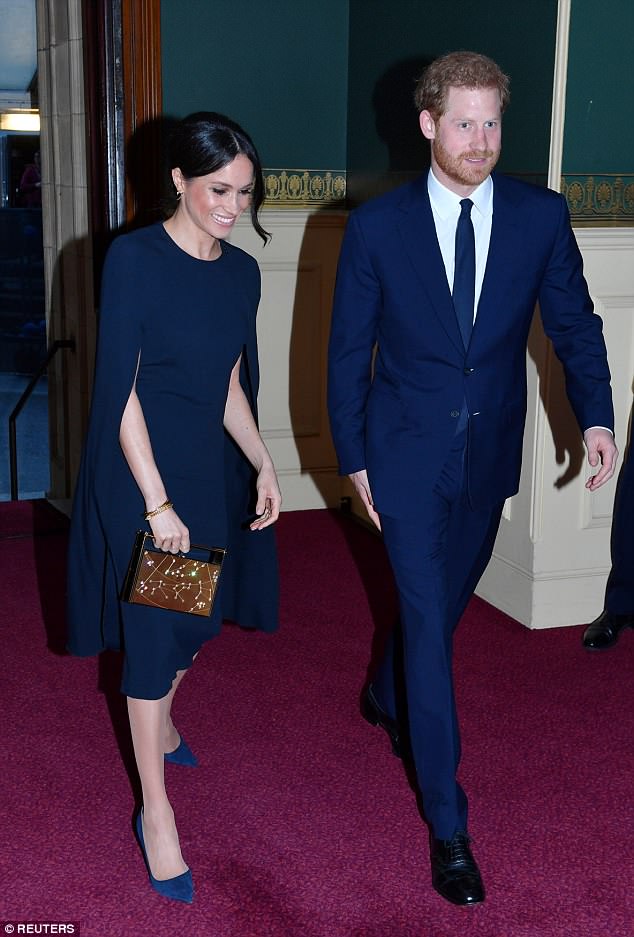 Prince Harry and Meghan Markle arrive for a special concert to celebrate the 92nd birthday of Britain’s Queen Elizabeth II at the Royal Albert Hall in London, Britain on Saturday; The two will marry at St George’s Chapel at Windsor Castle on May 19 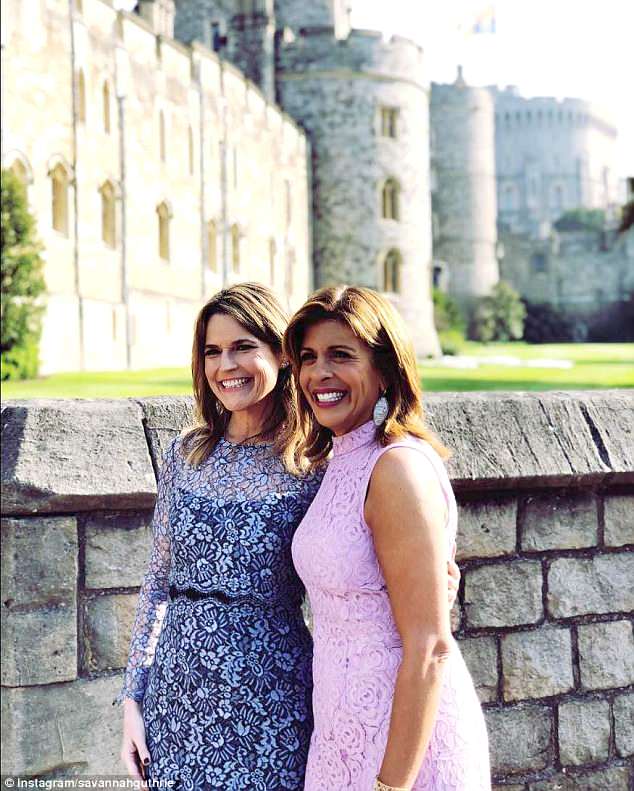 ‘Just another day at Windsor Castle with @hodakotb,’ Guthrie wrote with a photo of her and her buddy, posing in front of the official residence of Queen Elizabeth II

Guthrie wore a black fascinator in the photo, which is something more than a barrette but slightly less than a hat.

The two expert interviewers both shared the same boomerang video of themselves seated in some type of carriage, and daintily flicking their wrists back and forth.

Guthrie captioned the clip, ‘practicing the royal wave,’ while Kotb wrote, ‘Getting ready for May 19!!!’

At the end of the day, it was time for a cocktail by Guthrie’s account.

‘Jolly old London town,’ she wrote, with a photo of a dirty martini, up, garnished with a green olive. 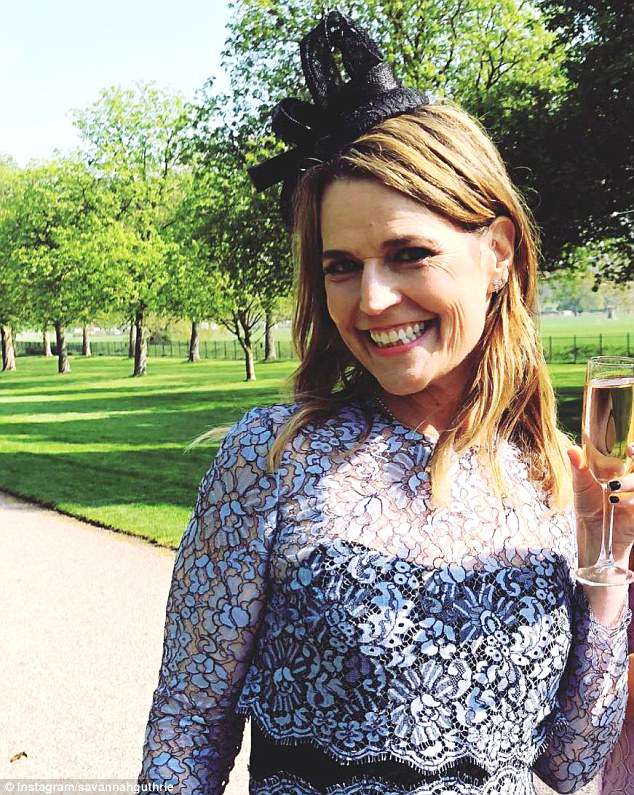 Guthrie wore a black fascinator in another photo, which is a headpiece associated with British royal events, and is something more than a barrette but slightly less than a hat 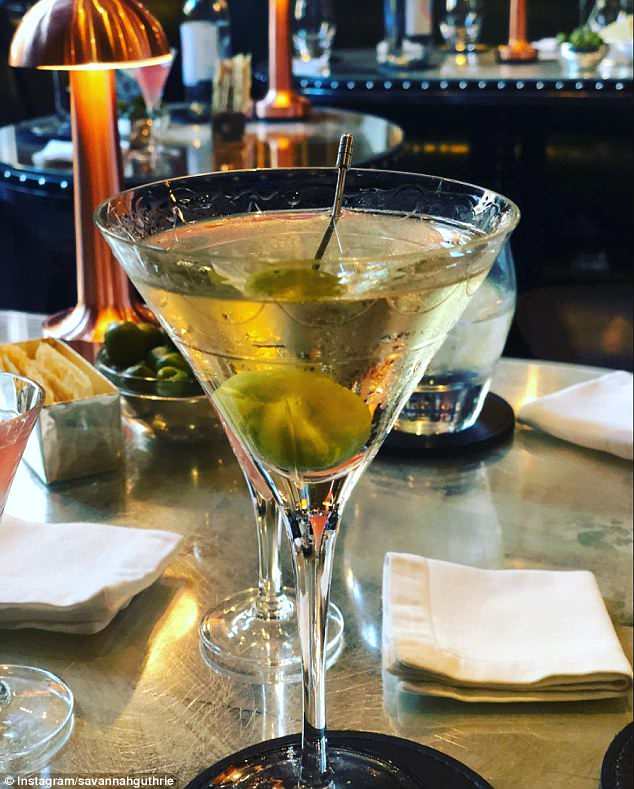 ‘Jolly old London town,’ Guthrie wrote, with a photo of a dirty martini, up, garnished with a green olive

It wasn’t clear if her friend and colleague joined her in person for the spirits, or just in spirit, as Kotb’s Instagram account revealed she was headed to Florence after their prep was complete.

Kotb met up with her other co-host, Kathie Lee Gifford, in Italy. She shared a photo, cuddled up with her long-time partner in television, true to form with a glass of wine within arm’s reach.

Gifford will also be part of the fun surrounding the nuptials of Markle, 36, and Prince Harry, 33, which starts on NBC on May 16 and goes live from the UK on May 18.

On the morning of the wedding on May 19, Guthrie and Kotb will begin broadcasting at 4.30am Eastern, which is two and a half hours before Markle will walk down the aisle toward her future husband. 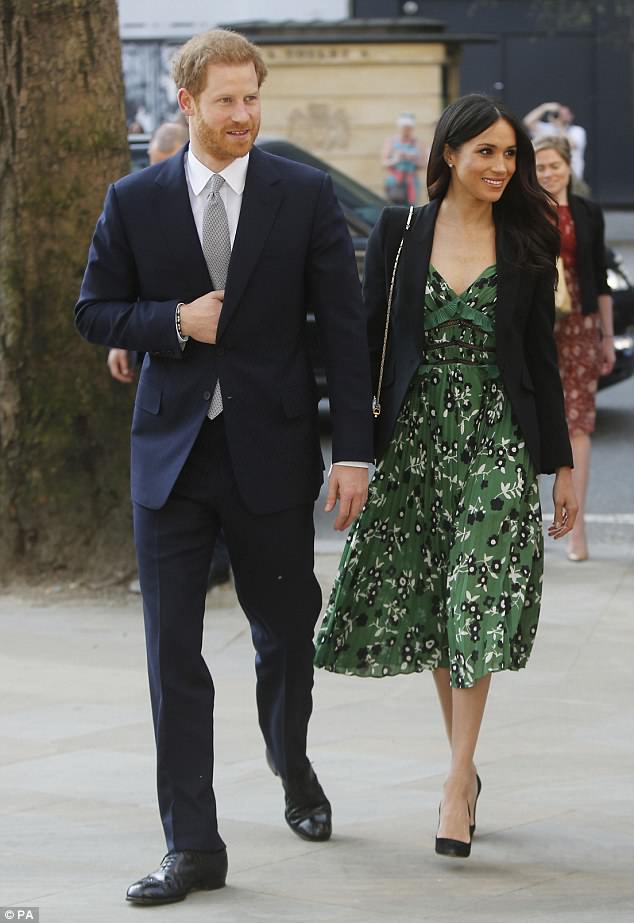 Prince Harry and Markle are seen here on Saturday arriving at a reception hosted by Australian Prime Minister Malcolm Turnbull and his wife Lucy at the Australian High Commission in London, to celebrate the forthcoming Invictus Games Sydney 2018

Guthrie and Kotb will kick off the coverage from their exclusive location, followed by Megyn Kelly and Gifford anchoring their timeslots, as per usual.

Al Roker and Sheinelle Jones will also join the crew at the anchor desk from Great Britain.

Guthrie and Kotb will also co-host an NBC primetime special, ‘Inside the Royal Wedding: Harry and Meghan,’ which will air on May 16.

The special will ‘provide an unprecedented glimpse into the fairy-tale romance [of Harry and Markle], featuring interviews with close friends of the couple, as well as prominent figures from the fashion, sports and entertainment industry.’ 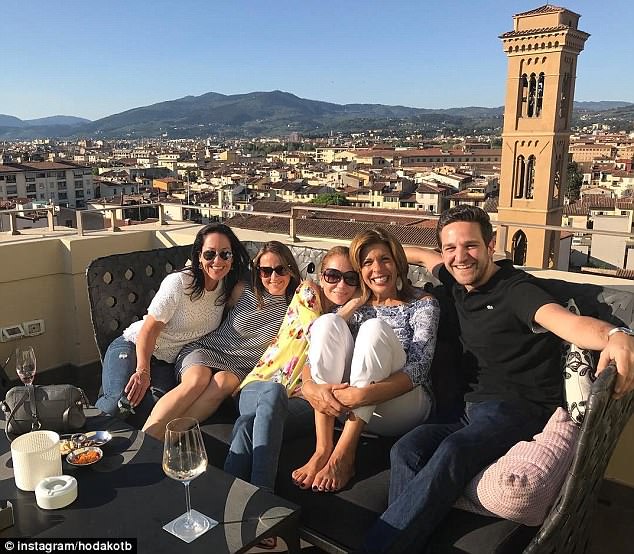 Kotb met up with her other co-host, Kathie Lee Gifford (in yellow), in Italy, sharing a photo cuddled up with her long-time partner, true to form with a glass of wine within arm’s reach