Savannah Guthrie has undergone cataract surgery to repair a blurry spot on her right eye nearly eight months after she had surgery to fix a tear in her retina.

The 48-year-old co-anchor excitedly announced on the Today show Monday morning that she was leaving early to finally have the surgery, which was postponed due to the coronavirus pandemic.

‘Remember when my retina was detached because Charley threw the train at my eye?’ Savannah recalled of the injury that occurred while playing with her now three-year-old son last November. ‘Well, guys it’s not over!’

Excited: Savannah Guthrie announced on Monday that she was leaving the Today show early to undergo cataract surgery to help repair a blurry spot on her eye 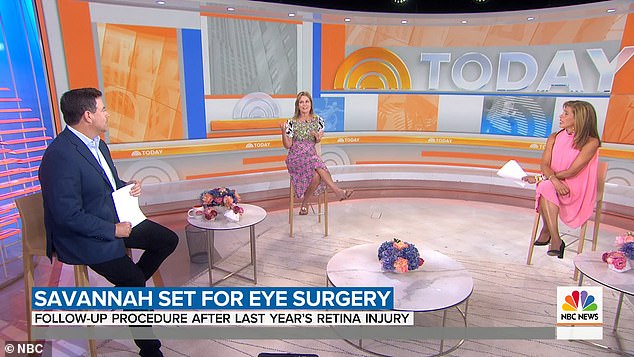 Announcement: Savannah shared the news with her co-stars Carson Daly (left) and Hoda Kotb during the socially-distanced segment

‘So apparently if you have that retina reattachment surgery, it’s very, very common to get cataracts, so happened to me,’ she explained. ‘I’m actually going to leave in, like, 20 minutes and go have cataract surgery.’

A cataract is a cloudy area in the lens of the eye that occurs when proteins start to break down and clump together. Cataracts can make a person’s vision blurry, hazy, or less colorful and lead to trouble with reading or doing everyday activities.

Most cataracts are age-related, according to the National Eye Institute (NIH), but they can also develop for other reasons, including an eye injury and eye surgery.

Cataract surgery is common — so common that Savannah’s co-host Carson Daly, 47, jokingly asked her if she was going to have the procedure live on air.

‘Um, no, because they’re slicing my eye, so I didn’t think that our viewers really wanted to see that,’ Savannah said with a laugh. 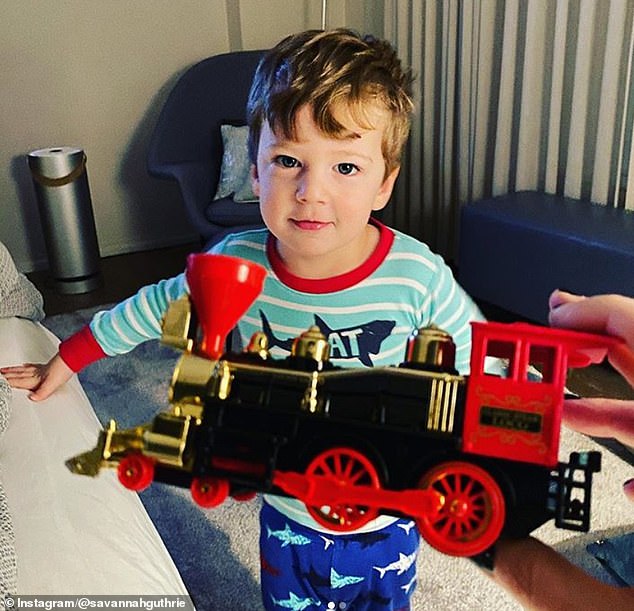 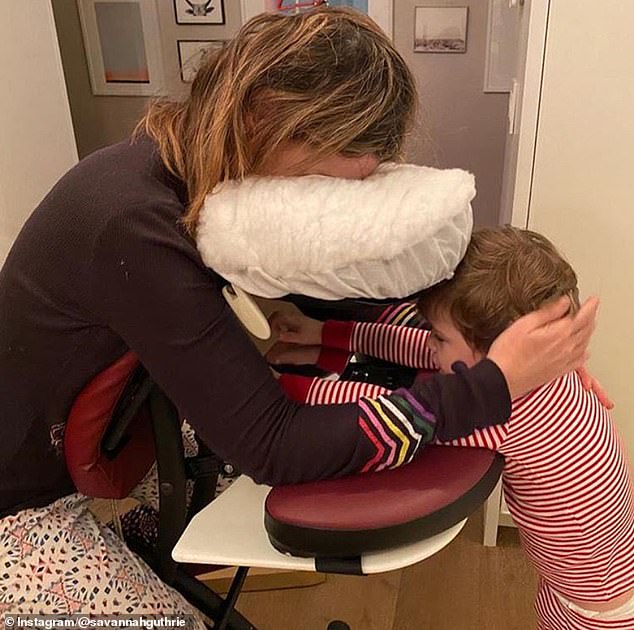 Hard recovery: The 48-year-old had to have extensive surgery to fix her torn retina in December after having temporary vision loss

‘But anyway, it’s been a long time, I’m super excited,’ she added. ‘I feel like it’s Christmas morning because if they remove this cataract, I’ll really be able to see, and I’ve had a hard time seeing.’

Savannah’s fellow co-anchor Hoda Kotb, 55, shared that she has witnessed her friend struggling to see over the past year.

‘A hard time is kind of an understatement. I don’t know if you guys have noticed, but Savannah, sometimes she holds her papers like this,’ Hoda said, pulling her paper up to her face, ‘and she’s reading with one eye.’

Savannah agreed her vision hasn’t been great over the past year.

‘It’s kind of distorted and then it’s got a wavy thing, and now I have this cataract, which is a big blurry spot,’ she said. ‘Once they remove that blur, I think it will be a lot better.’ 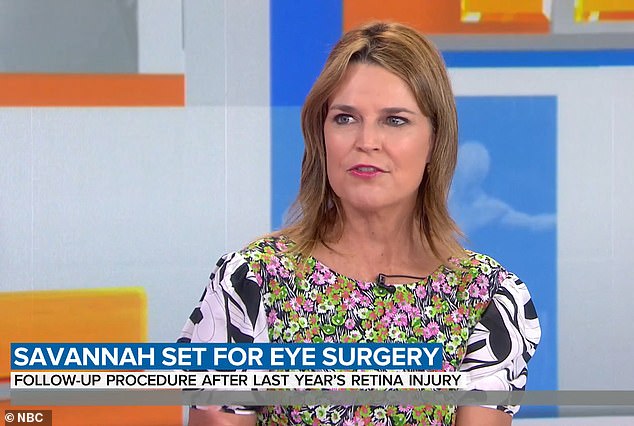 Normal: Savannah explained that it’s ‘very common’ to develop cataracts after retinal detachment surgery, which is what happened to her 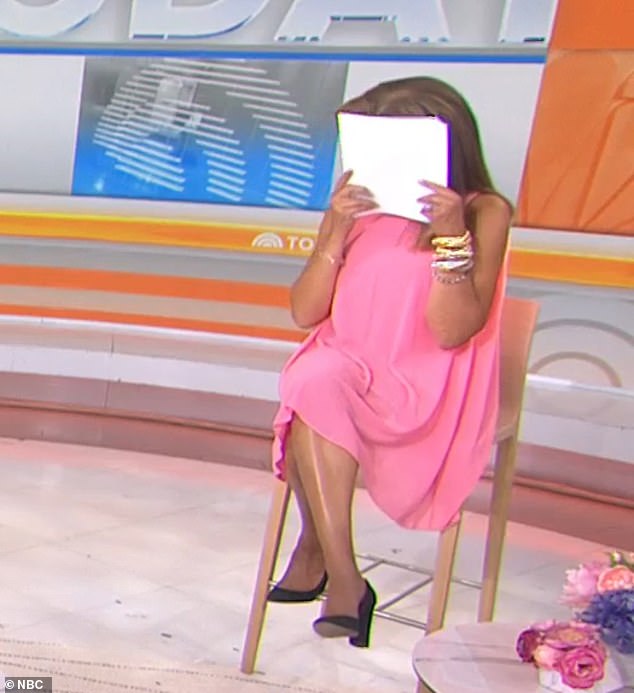 Struggles: Savannah has been having trouble with her vision for months, and Hoda noted that she has seen her friend lift her papers up to her eye to try and read them 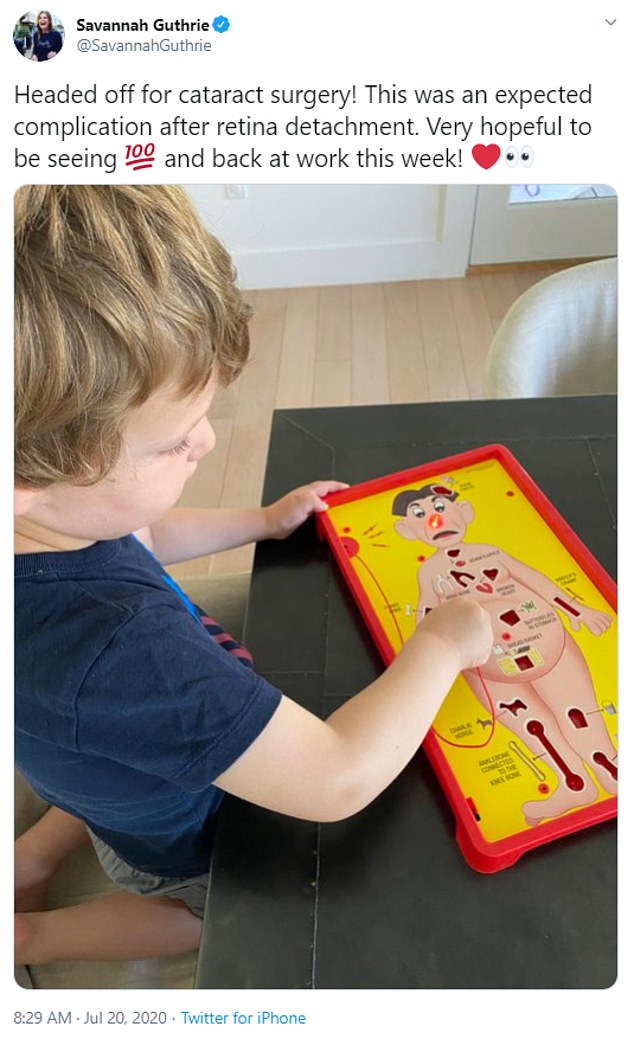 Too cute: Before heading into surgery, the mom took to Twitter to share a sweet photo of her son Charley playing the game Operation

The surgery only takes about a half hour, and Savannah hopes to have a short recovery and be back to work in a few days.

‘I won’t be back tomorrow because I’ll have a bandage, but maybe later in the week,’ she told her co-stars.

‘Headed off for cataract surgery!’ she wrote. ‘This was an expected complication after retina detachment. Very hopeful to be seeing [100 per cent] and back at work this week!’

A cataract is a cloudy area in the lens of of the eye that occurs when proteins start to break down and clump together.

Cataracts can make a person’s vision blurry, hazy, or less colorful and lead to trouble with reading or doing everyday activities.

Most cataracts are age-related, but they can also develop for other reasons, including an eye injury and eye surgery.

The Today star’s eye trouble started when her son Charley accidentally threw a toy train that tore her retina in late November. Although her initial surgery restored her temporary vision loss, her eyesight hasn’t been what it used to be.

‘My eyesight is not great,’ she told People in April. ‘I have to have a couple of follow-up surgeries, which is unfortunate but not unexpected.’

Savannah, whose surgeries had been postponed due to the coronavirus pandemic, explained that her eyesight ‘isn’t where it was,’ and she thinks ‘it’s getting worse.’

‘Eventually I’m hopeful that when everything turns to normal, I’ll be able to schedule those surgeries and I’m hopeful there’ll be a big improvement,’ she said. ‘I don’t think my eye will ever be the way it once was, but I think it will be much improved.’

Savannah said she will have to have cataract surgery because she is seeing blurry spots, explaining that ‘most people will end up developing cataracts’ following a retinal detachment.’

While she had to wait until the summer to schedule her follow-up surgeries, she was grateful that she was able to have her initial surgery when she did.

‘It saved my eye,’ she said. ‘If I hadn’t been able to have that surgery, I think I would have probably lost my vision in that eye. So yes, I’m very, very grateful and this is just one those things. It’s an inconvenience. It’s a story that keeps going on.’

Doctors initially hoped they could repair her torn retina with multiple laser sessions, but it was ultimately decided that surgery was her best option.

‘The hardest part is sitting still, keeping your head down. You kind of get a neck and a backache,’ she said during her lengthy post-surgery recovery. ‘I can’t say it was easy…but it’s manageable and it’s all going to turn out OK.’

When Savannah returned to work after the new year, the Today show interviewed her surgeon, Dr. Donald D’Amico of Weill Cornell Medicine in New York City, to better explain what he did to repair her torn retina. 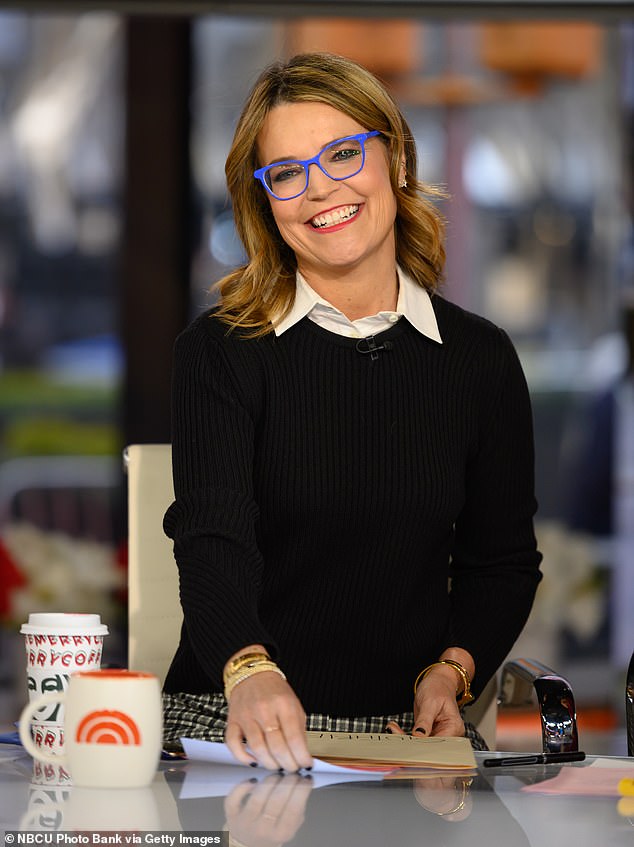 Not over: Savannah (pictured after her eye injury in December) had to postpone her follow-up surgery due to the pandemic 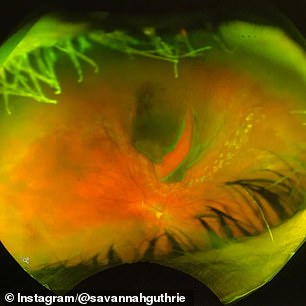 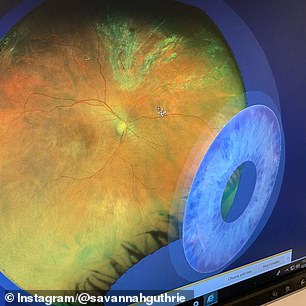 Fixing the damage: Savannah’s retina is pictured before (left) and after (right) her surgery

‘Fortunately for Savannah, the tear was at the side of her retina and not the very center, so the prospect for her central vision to return is very good.’

A gas bubble was placed in the back of Savannah’s eye to help her retina slowly reattach to the back of her eye, which is why she had to lie face down for most of the day.

‘The bubble holds the retina reattached in the eye, and as the bubble goes away by the body absorbing it, the laser treatment and the freezing treatment provide the permanent scar that keeps it stable.’