Savannah Guthrie has returned to the Today show for the Macy’s Thanksgiving Day Parade after she took two days off because her two-year-old son Charley threw a toy train at her eye and tore her retina.

The 47-year-old anchor was forced to take time off from the Today show on both Tuesday and Wednesday because of an eye injury she suffered over the weekend at the hands of her younger child.

But Savannah, ever the professional, returned to her post in New York City on Thursday amid her eye troubles just in time to anchor the parade with her co-host Hoda Kotb, 55. 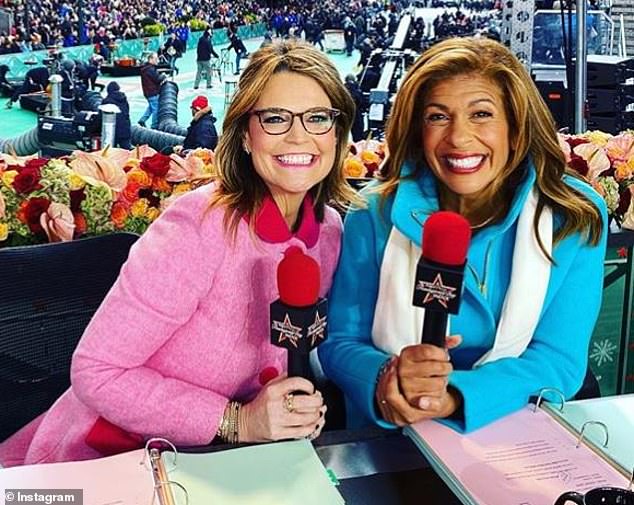 Her happy return: The Today show anchor shared multiple snaps of her hosting the parade with Hoda Kotb, 55 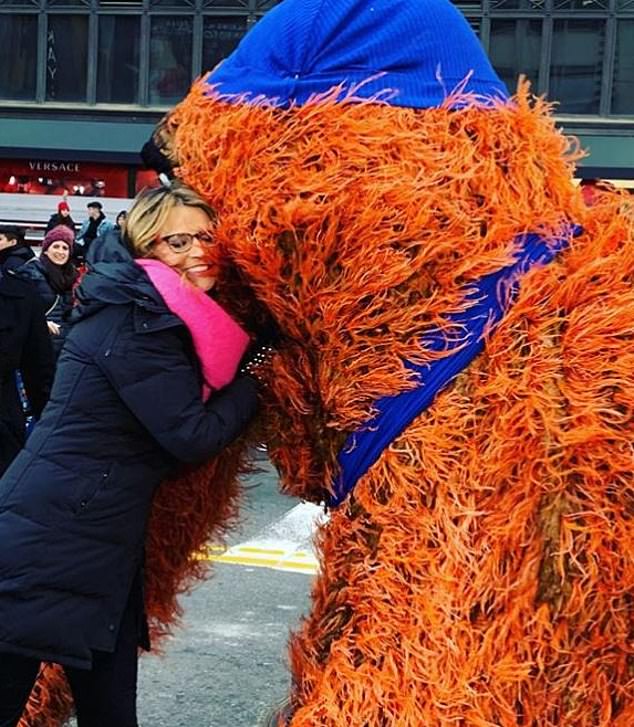 Snuggling up: Another picture from the parade showed Savannah hugging Mr. Snuffleupagus, a character from Sesame Street, during the parade

Savannah shared a picture of herself with Hoda at the parade, captioning the image ‘Thankful’.

Her co-host Hoda also shared a fun picture of the pair out on the streets of NYC with Mr. Snuffleupagus, a character from Sesame Street, walking in the parade behind them.

‘Snufffffffyyyy,’ Hoda wrote with both of the anchors showing excitement for seeing the figure in the parade.

Each of the images shared on Instagram showed Savannah modelling her glasses, which has has been wearing the last couple days since suffering her injury.

The injury was revealed on Wednesday when Savannah called into the Today show to inform viewers about why she had been out of office for the last couple of days.

‘Charley threw a toy train right at my eye and it tore my retina,’ she told her co-hosts. ‘It happened last week actually, and then I lost my vision in my right eye about 24 hours later, and then it turned out to be kind of serious. They were afraid my retina was detached, so they told me to just take it easy.’

‘I see you’re showing the little culprit there,’ she joked as a picture of Charley and the train flashed on the screen. ‘It has a real pointy edge, and he threw it right at me.’

The mom, who also has a five-year-old daughter named Vale, said the accident happened over the weekend, and she ended up seeing an ophthalmologist on Saturday because she lost vision in her right eye. 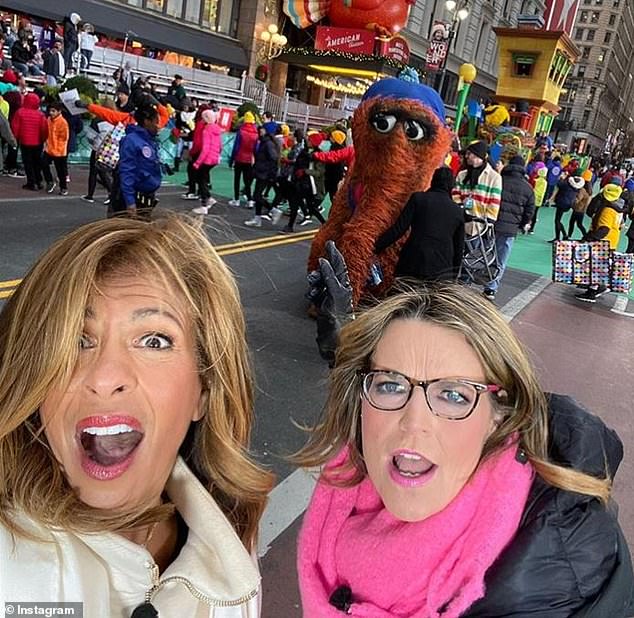 Pushing through: The parade comes after Savannah had to miss two days of work this week following an eye injury 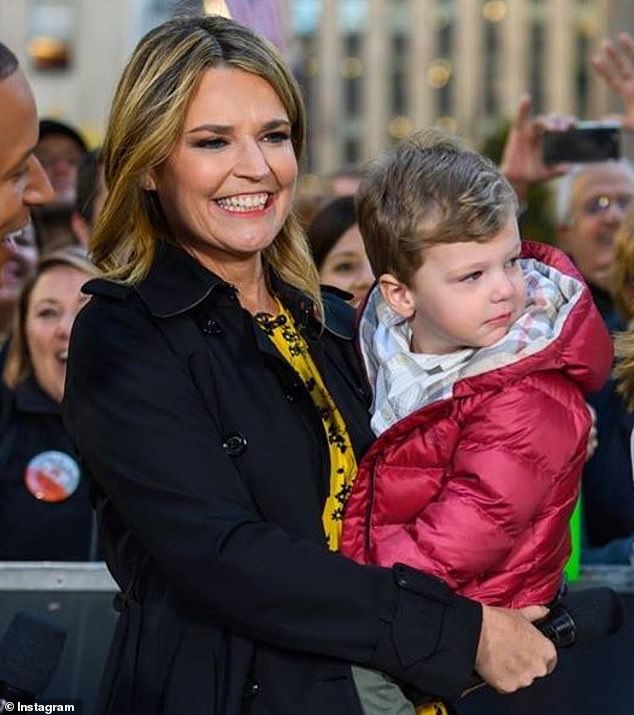 Ouch! Savannah first revealed Wednesday that she has missed the past two days of work because her two-year-old son Charley threw a toy train at her eye and tore her retina 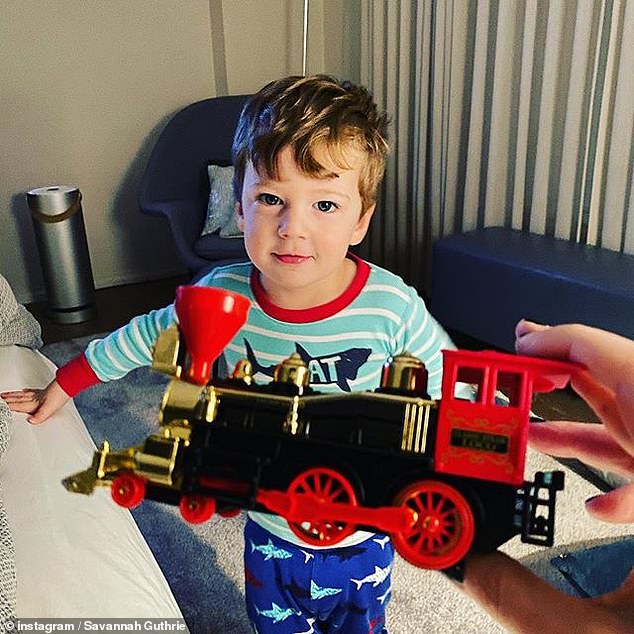 Sharp edges: The mom-of-two, who lost vision in her eye on Saturday, took to Instagram to share a photo of her son and the train that hit her last week

‘In fact on Monday, I came to work, but I couldn’t’ see in one of my eyes. That’s why I was wearing those glasses,’ she explained. ‘It was so blurry. Not to get too gross, but there was so much blood inside the eye that it completely blocked my vision.’

Savannah compared it to ‘putting Vaseline on a lens.’

The journalist said her doctors weren’t initially able to tell the nature of the injury, and she was admittedly surprised when they rushed her in for an emergency procedure after work on Monday.

‘They’re essentially trying to weld back this tear in the retina very carefully, and really trying hard to avoid the retina detaching and avoid having to do a major surgery,’ she said.

Savannah has been going for laser treatments in the morning and the night to try and fix the tear and restore her vision.

‘At first they didn’t think it had worked, and it looked like I was gonna have to have this surgery, but now it’s looking more hopeful, and I’m actually still hoping I can do the [Macy’s Thanksgiving Day] parade tomorrow,’ she said.

‘I’m not supposed to jump up and down or anything because it’s kind of like literally hanging by a thread,’ she added. ‘But I’m very positive because I think it’s gonna be OK.’ 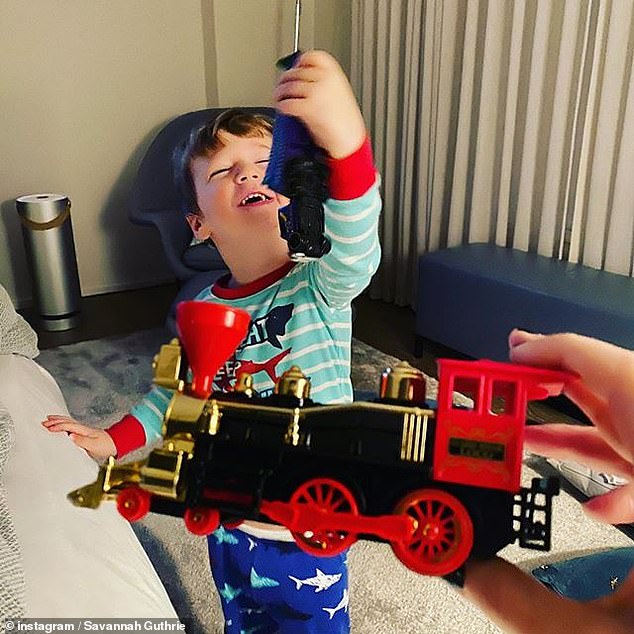 Serious: The Today anchor said she has been doing laser treatments as doctors try and weld the tear and avoid the retina detaching, which would require surgery to fix 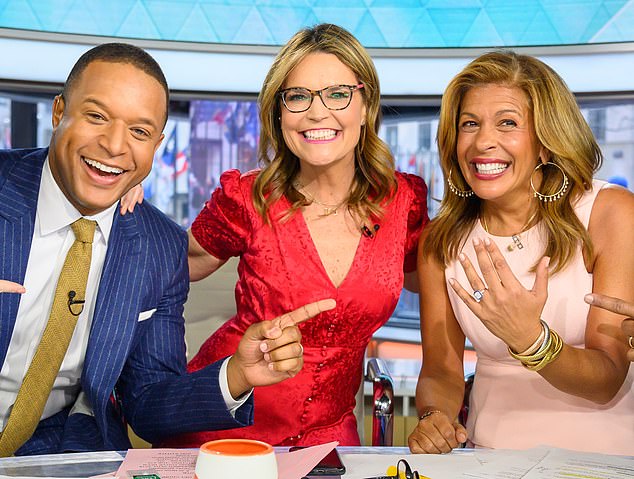 Secret injury: Savannah ended up going to work on Monday (pictured), opting to wear glasses on the show, but she admitted that she really couldn’t see out of her injured eye 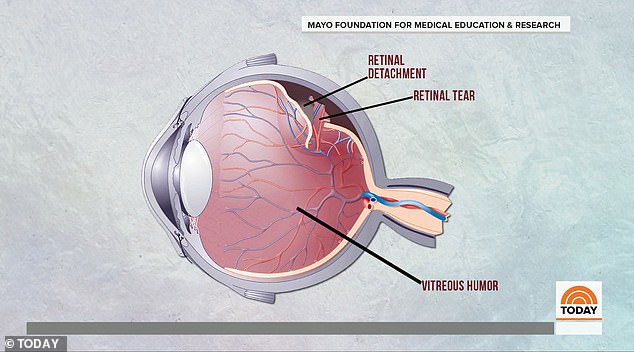 Here’s hoping: NBC News medical contributor Dr. Natalie Azar explained that Savannah’s vision loss appears to be from a vitreous hemorrhage and not any detachment

NBC News medical contributor Dr. Natalie Azar explained that Savannah’s vision loss appears to be from a vitreous hemorrhage and not any detachment.

‘Hopefully that blood will resorb and she will regain full vision,’ she said.

As for Charley, Savannah said he is unaware of how badly he hurt her and is actually proud of his impressive throw.

‘He’s two, so he doesn’t really know what he did, and of course, I wouldn’t want to make him feel bad about it,’ she said. ‘I was FaceTiming with my mom to tell her, and he came running in and he said, “I did it! I did it!” He was very proud of himself.’

In addition to calling in to the show, Savannah took to Instagram on Wednesday to post photos of herself holding up the toy train that tore her retina in front of her pajama-clad son.

‘Here’s the reason I’ve been out for a couple days. This little cutie has super strength!!’ she wrote. ‘Last week, Charley threw this train at my eye and turns out it caused a large tear in my retina, which has caused me to lose sight temporarily in my right eye!

‘It was a little bit touch and go over the last few days but it looks like the retina will hold and not detach and I won’t need full eye surgery,’ she continued. ‘The docs are hopeful the laser procedures are working to keep the retina from detaching and I won’t have to have surgery.