A money-savvy dad who wanted to make use of a small pocket of space in his house created a walk-in wardrobe for just £120.

Kenroy Malcolm, 33, from Bromsgrove, decided to create a handy storage space in a small room in his house that had previously been a messy graveyard for knick-knacks, and transform it into a useable wardrobe.

The father-of-two was shocked to discover it would cost him £470 in materials if he used a professional joiner for the job.

Not wanting to spend a small fortune on something he could do himself, the teaching assistant and Youtuber looked at sourcing what he needed from eBay and Wayfair after finding a sliding door at Argos for £32. 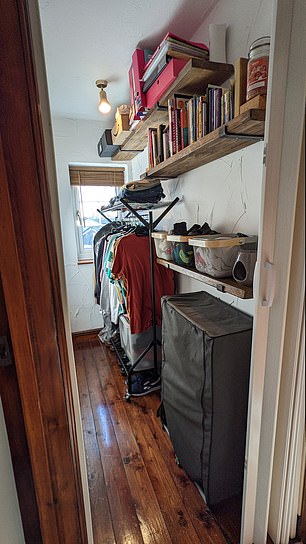 Kenroy Malcolm (pictured), 33, from Bromsgrove, wondered what the family could do with a small pocket of space in his house and decided to build a walk-in wardrobe 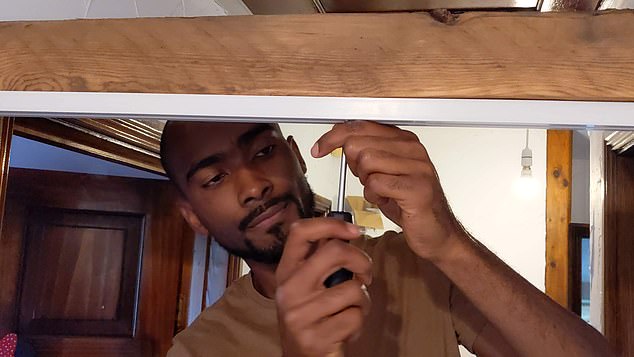 ‘We have a small area in between two bedrooms that we wanted to use for storage but we were unsure how to make the best use of the area,’ said Kenroy, speaking to LatestDeals.co.uk. ‘The original idea was to knock one of the walls down and make it a walk-in closet but I’m not looking to do that right now so I was looking for a plan B.’

‘Then I stumbled upon a sliding door on Argos which would save us space compared with a traditional door. I knew this was the best option as we could avoid swinging a door open and closed, instead just sliding one over to access the space.’

‘I wanted to do this myself rather than pay someone to come in and do it for me. A friend who is in the trade estimated that a joiner would charge approximately £170 per day for labour.’

‘As this project would likely take a full day, and materials if bought would cost around £300, this means I would be paying roughly £470. I knew I could make this space a walk in wardrobe with a difference without paying for a professional job.’

He explained that saving money for his family was a main priority when he undertook the project and installing the sliding door himself was a great way to save on high costs from a professional.

After finding a ‘naked wardrobe’ that allows everyone to see how clothes are stored, Kenroy set about making shelves from old scaffolding boards he had from a previous project. 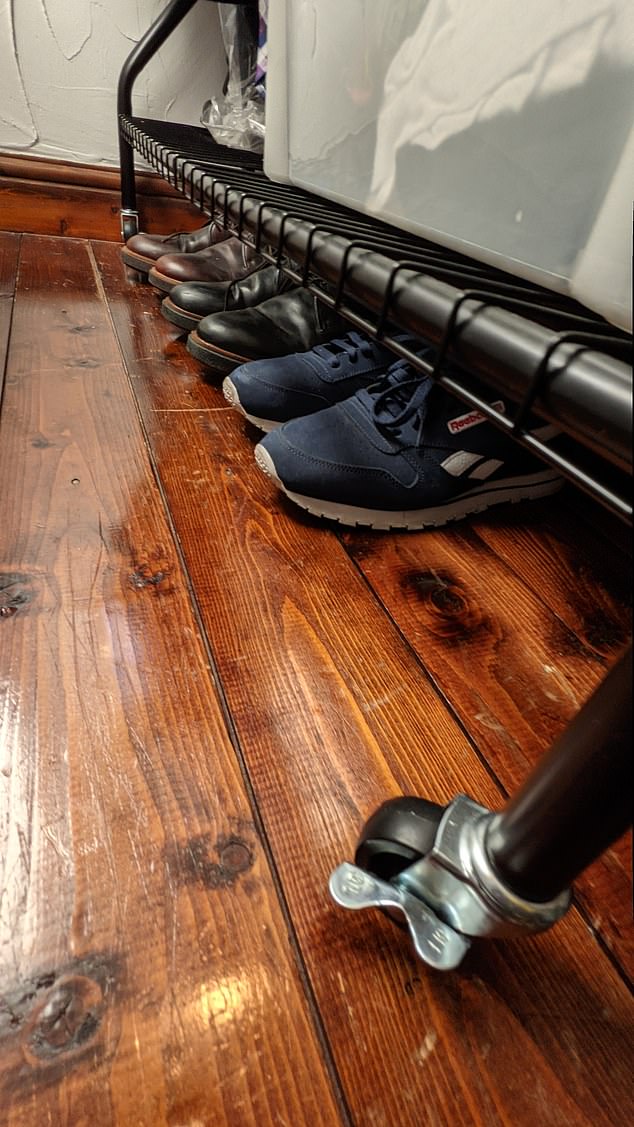 Kenroy wanted an open plan feel to the wardrobe and now the space is utilised properly and much tidier (pictured, after)

The only items he bought for the whole endeavor was the folding door from Argos for £32, shelf brackets from eBay which were £22 for 4; and the naked wardrobe from Wayfair for £55.

‘I got free recycled wood to make the door frame. I was really impressed with this particular piece of wood as I actually salvaged it from my neighbour.

‘He was doing some renovation on his loft and he was throwing these pieces of old timber away which I think were a part of his rafters in his attic.

‘Rather than chucking it away, I wanted to make use of this solid piece of wood in my project. I also picked up some timber from my local hardware store for no more than £10.’

‘I also made some savings on my purchases by using a site called Top Cashback. I am always aiming to save money where possible because my goal is to save enough to buy my first investment property.

‘The site is great for saving money in cashback as between February and May alone this year I have generated over £100 in cashback.’ 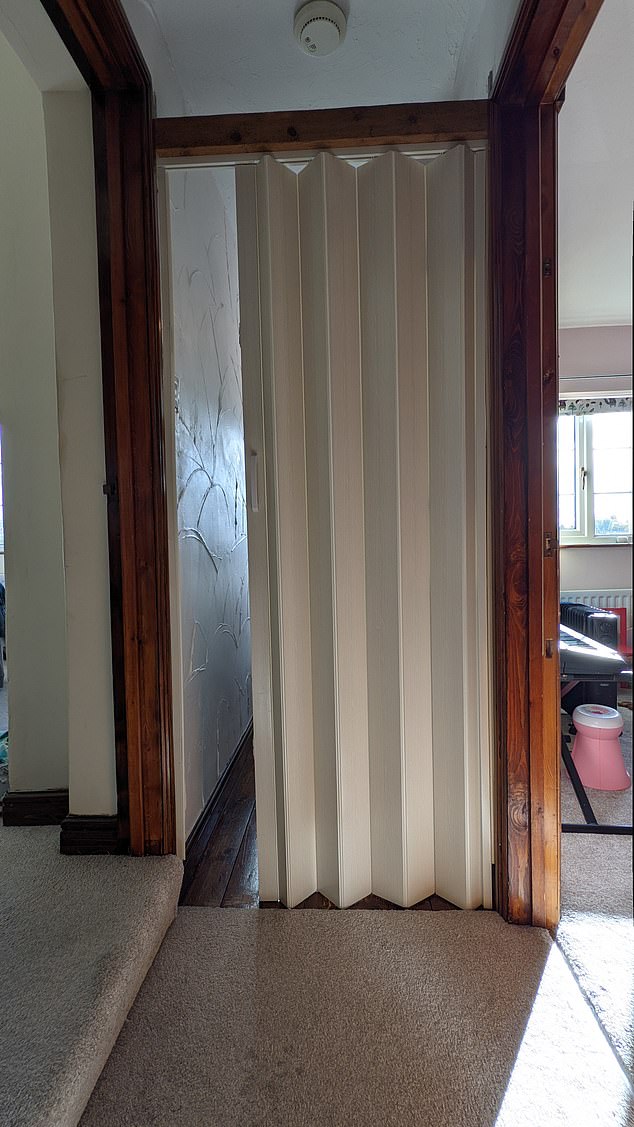 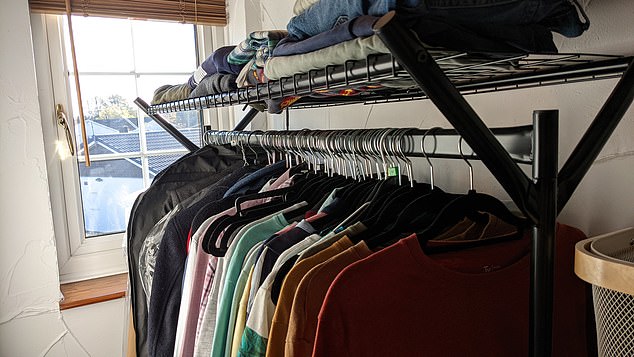 ‘The first thing I did was clear the space. A lot of stuff was in there that just needed to go. I originally bought the bookshelf which was in there second hand for £15. I then actually sold it to someone for the exact same price so that was the final step towards having an empty space to work on.

Next, he removed the staples from the wood his neighbour gave him. The wood was in rough condition, so he sanded it down and left it to give a rustic feel.

He found that sliding doors have a downside (that they only come in a specific size) but thankfully for the project it fitted pretty perfectly and he filled the gap with leftover timber.

‘Next I set up the naked wardrobe,’ he explained. ‘The overall quality was good for the price, and the assembly was very straightforward.

‘The final step was to attach the shelves, which I had made earlier in the year out of scaffolding boards. I drilled in the brackets and then attached the shelves with the help of my brother.’

‘Overall I’m super happy with this project. I was quite busy at the time so it took me a few days to complete, but I reckon if I’d set aside one full day I could have had it all done and dusted in that timeframe.

‘I’m glad I was able to come up with a cost-effective solution to make the best use of this small space in the house.’