A savvy DIY fan has told how she gave her tired-looking kitchen a much needed modern makeover for just £230.

Sam Jones, 27, a law student from Skegness, explained that when she moved into her new family home in October 2020, the dated kitchen she’d inherited was screaming out for a stylish overhaul.

‘The old kitchen felt unloved. It was clearly outdated and hadn’t been renovated for a while,’ she said, speaking to money-saving community LatestDeals.co.uk. ‘Everything clashed, from the baby blue walls to the cream tiles and black worktops.’

Sam started browsing Pinterest and home interiors magazines for ideas on the style of kitchen she wanted.

Sam Jones, 27, a law student from Skegness, has told how she gave her tired-looking kitchen a much needed modern makeover for just £230. Pictured, the kitchen before the transformation 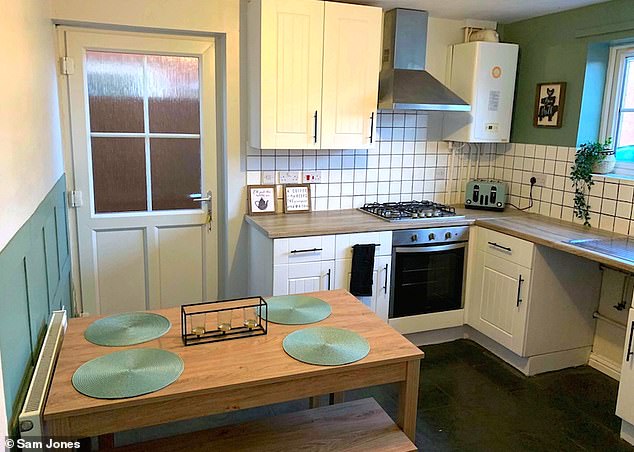 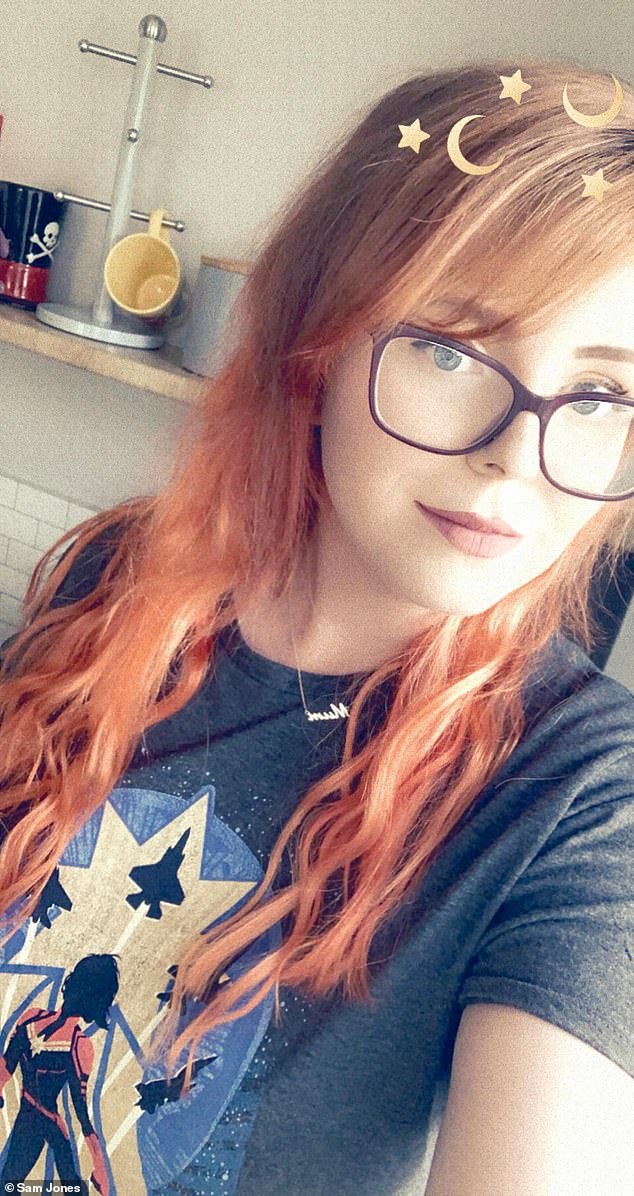 ‘As the room is at the front of the house, I wanted it to be modern and bright so when the sun rises and my family and I are having breakfast, it would be the perfect start to the day,’ she explained.

Sam went on to say how she looked at a similar kitchen which would’ve cost in the region of £9, 000 – but decided to achieve the same effect on a budget.

‘As soon as we got our hands on the keys to the house, we got straight to painting,’ she said. ‘First up were the kitchen cupboards.’

‘My partner and I lightly sanded them down and painted them with Frenchic chalk paint in the shade Whitey White. We applied six coats, but it was worth it.’ 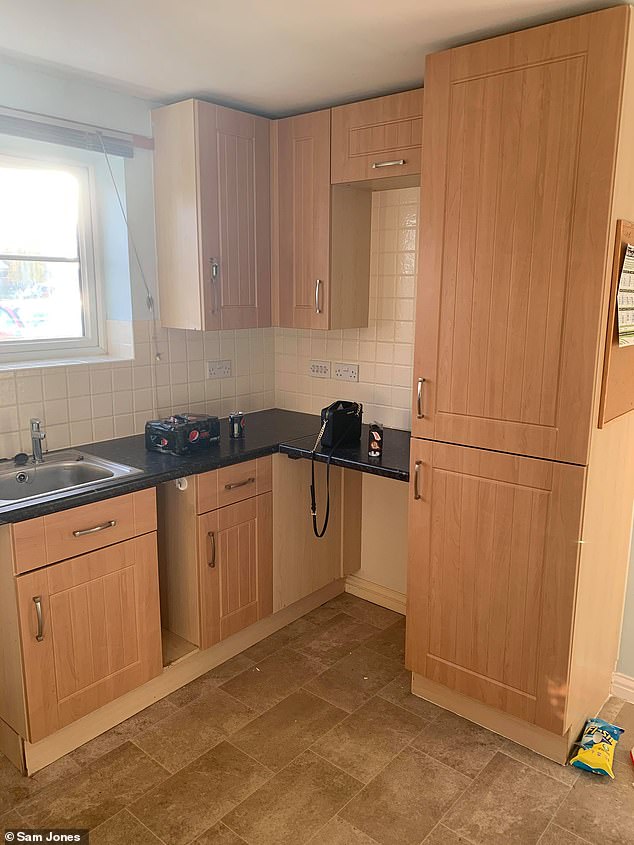 The DIY fan said that when she moved into her new family home in October 2020, the dated kitchen (pictured) she’d inherited was screaming out for a stylish overhaul 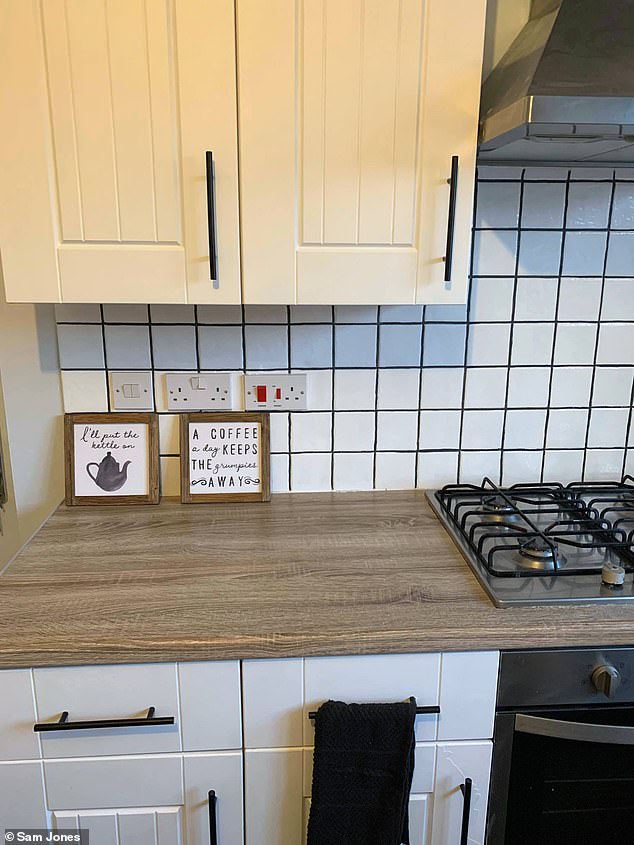 Sam said how she looked at a similar kitchen which would’ve cost in the region of £9, 000. Pictured, the kitchen after Sam’s impressive DIY efforts

‘Once the cupboards were done, we used tile paint to cover the cream coloured backsplash and make them bright and white again. Once they’d dried, we used grey grout pens to make the tiles pop.

Fablon from Wilko, £8 a roll (we bought two)

Paint for the panelling and feature wall: Valspar Silver Eucalyptus wall paint from B&Q, £15 for 1L – ‘although technically, it was free as we bought while a 3 for 2 offer was on,’ said Sam

MDF sheets to cut and use for the panelling, £7.28 (we bought three)

‘Next, I used oak-effect Fablon (self-adhesive vinyl) to cover the kitchen worktops. It took an hour or so – and a lot of patience – to apply, but I’m really pleased with the end result.’

Sam removed the old chrome cupboard handles and replaced them with stylish matte black ones from Amazon.

Laying the floor, doing the panelling and painting the walls were next on the agenda.

‘The previous floor was vinyl, but it was ripped and dirty and you could tell it had been down for a while,’ explained Sam. ‘We decided to replace it with proper tiles, which I laid myself. I’d never done this before, but I learnt how to do it by watching YouTube tutorials.

‘We had all the tools we needed at home already. We just picked up the tiles we wanted from B&Q when there was a 4-for-3 offer on them.

She continued: ‘The panelling came last, as it was the part I was most worried about messing up.

#However, once I’d got into the flow of cutting the MDF sheets into straight lines using a jigsaw, I was on a roll.’

‘I had already measured how large I’d like the panelling to be, and sketched it out on the wall to see how it would look.

‘I then stuck the panelling on the wall with some No More Nails adhesive, and gave it two coats of paint – I chose a shade called Silver Eucalyptus from the Valspar range.

Sam also used the hue for a feature wall opposite the panelling. All other wall areas were painted in a complementing shade of pale grey: Polished Pebble by Dulux.

‘The whole kitchen took eight days to do, from start to finish,’ said Sam. ‘I’m absolutely in love with the end result – it’s perfect for my personality and my taste, and it brightens up the whole house.’

As with most DIY projects, some parts went more smoothly than others. 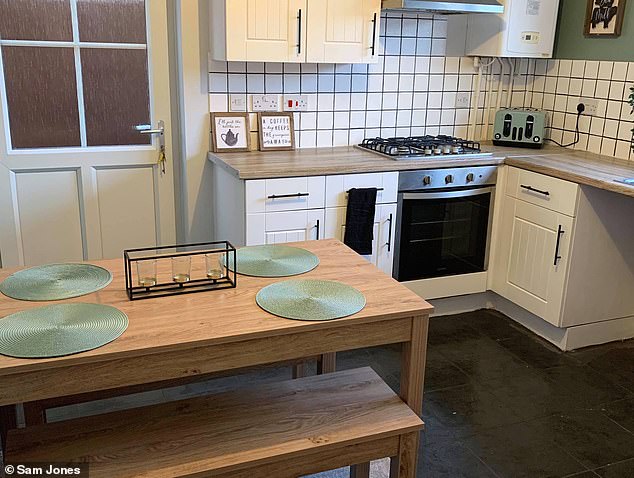 Sam and her partner lightly sanded the cupboards down and painted them with Frenchic chalk paint. Pictured, the cupboards after the transformation 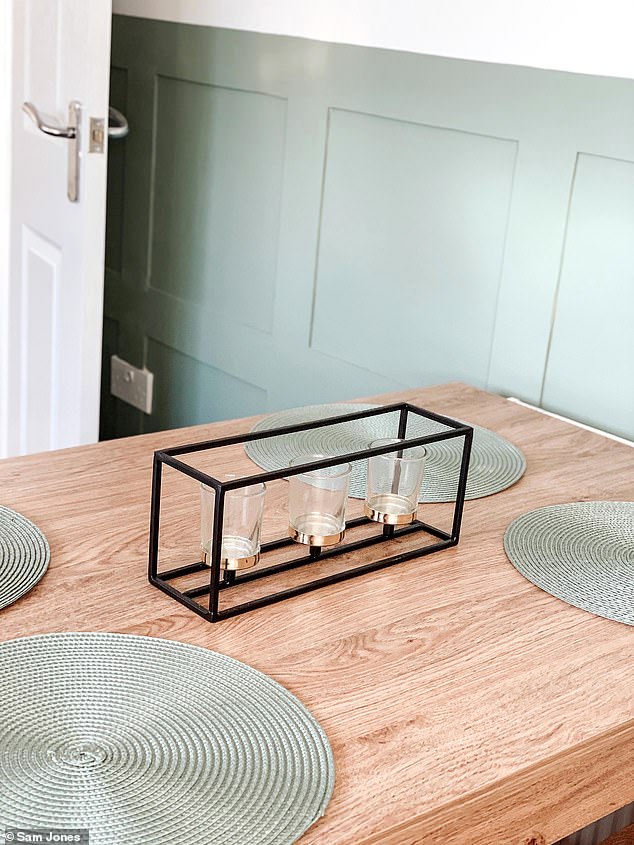 Sam told how the project gave her confidence in her skills. Pictured, the stylish new interior 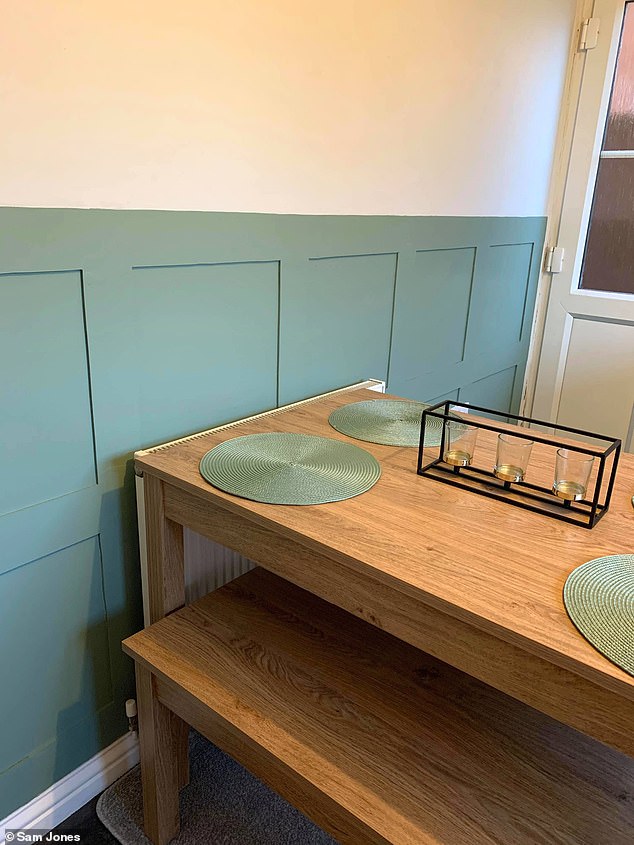 Sam removed the old chrome cupboard handles and replaced them with stylish matte black ones from Amazon. Laying the floor, doing the panelling and painting the walls were next on the agenda (pictured, after the transformation)

‘The easiest bit was painting the backsplash tile – those small foam rollers are a godsend,’ she explained. ‘The most challenging was probably the panelling, as everything had to be measured precisely to ensure it looked straight.’

The project has given Sam confidence in her skills. If you’re unsure of using tools, however, it’s best to call upon a professional to help, so any accidents are avoided.

‘My advice would be to take it steady,’ she added. ‘There’s no need to rush it. Patience is the best thing to have when redoing a room on a budget. As it’s on a budget, any mistakes can be fixed. You can’t rip out a whole new kitchen if you don’t like the end result.’

Tom Church, Co-Founder of LatestDeals.co.uk commented: ‘The kitchen is such a key part of the home and it’s often high up on the to-do list when it comes to renovating.

‘We’re spoilt for choice when it comes to the range of fitted kitchens available. However, before you part with your hard-earned cash, it’s worth looking into those DIY updates you can make that’ll help you get the look you’re after for a fraction of the cost.

‘Whether it’s a stopgap to give you more time to save or a longer-term solution, you may be surprised at what you can achieve.’