A savvy woman has told how she removed old sticky labels from her window using mayonnaise.

Any homeowner knows there’s nothing more frustrating than peeling off a sticker on a new pair of shoes or kitchen appliance, only for the grim residue to still remain.

But Lauren Jeffery, from Dartford, shared impressive before and after photos to Hinch Army Cleaning Tips Facebook group, proving why mayonnaise could be the perfect answer.

She penned: ‘Whoever shared the tip about mayo removing old stickers, thank you! Our previous owners loved to stick things to the window frames!! Stuck some mayonnaise on, left for around 30 mins and wiped away!’

Lauren Jeffery, from Dartford, told how she used mayonnaise to remove old stickers that were left on the window by a previous owner. Pictured, the sticker marks with mayonnaise smeared on 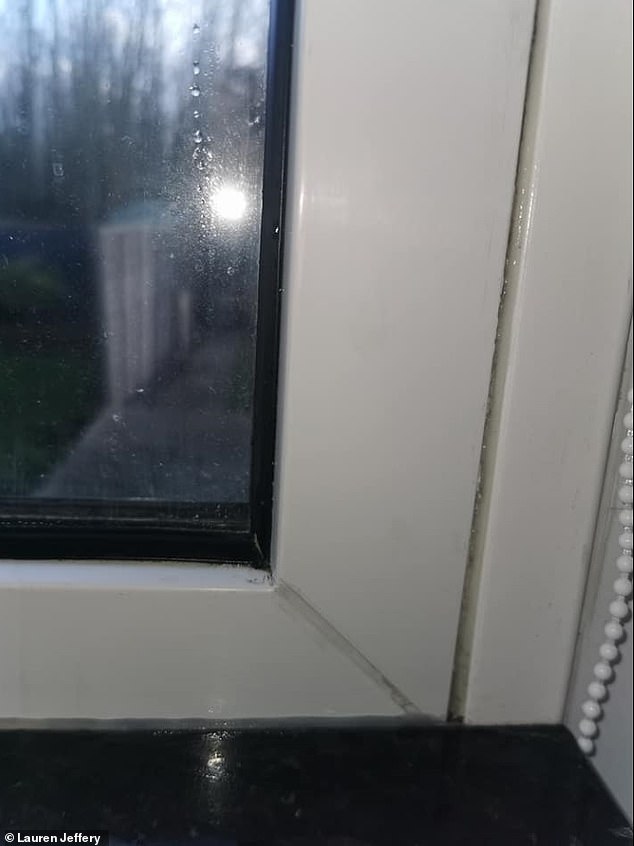 The savvy homeowner shared impressive before and after photos to Hinch Army Cleaning Tips Facebook group. Pictured, the impressive results after the stickers were removed

Alongside the images, Lauren explained: ‘Stuck some mayo on, left for around 30 mins and wiped away’ (pictured)

The before photo shows four sticker marks which Lauren had smeared with the popular condiment.

Meanwhile, the after snap shows the results once the mayonnaise had been wiped away – and the window frame looks almost brand new.

Lauren went on to explain how there was just a tiny faint little mark which she couldn’t leave, so she added on some pink stuff for a few minutes and ‘voila.’

Before any negative comments rolled in, she also joked she’s ‘very aware’ that the windows need a clean – before adding ‘it’s on the list.’

And many were quick to take to the comments section, excited by the prospect of giving the handy hack a whirl themselves.

‘I’m going to try this at the weekend,’ commented one, while a second similarly agreed: ‘Must try this!’

However, a third had a different suggestion and added: ‘Mr Sheen polish works to in half the time. Spray a good amount on the residue of the sticker and within 5 mins you can wipe it clean ?’

But the unusual tip is just the latest in a long line of cleaning hacks sweeping the web in recent weeks.

Louise Wright, from Glasgow, previously told how she removed the rust from her old baking trays using a 2p coin – a clever hack which was branded a ‘game changer.’

‘I spend a fortune on baking trays because I buy the cheaper range and they don’t last long being marked by tough cooking stains. But I tried the 2p trick going about and it worked.’