A savvy homeowner has told how she removed the rust from her old baking trays using a 2p coin – and her clever hack is branded a ‘game changer.’

‘I spend a fortune on baking trays because I buy the cheaper range and they don’t last long being marked by tough cooking stains. But I tried the 2p trick going about and it worked.’

And many were impressed with the thrifty woman’s top tips, with some even admitting their ‘mind was blown.’

‘WOW.. lil bit of work.. but worth it,’ commented one, while a second joked: ‘Guess what I’ll be doing tonight! Thanks for the tip.’

Louise Wright, from Glasgow, took to Hinch Army Cleaning Tips Facebook group and told how she used a two pence coin to remove rust from her old baking trays. Pictured, before 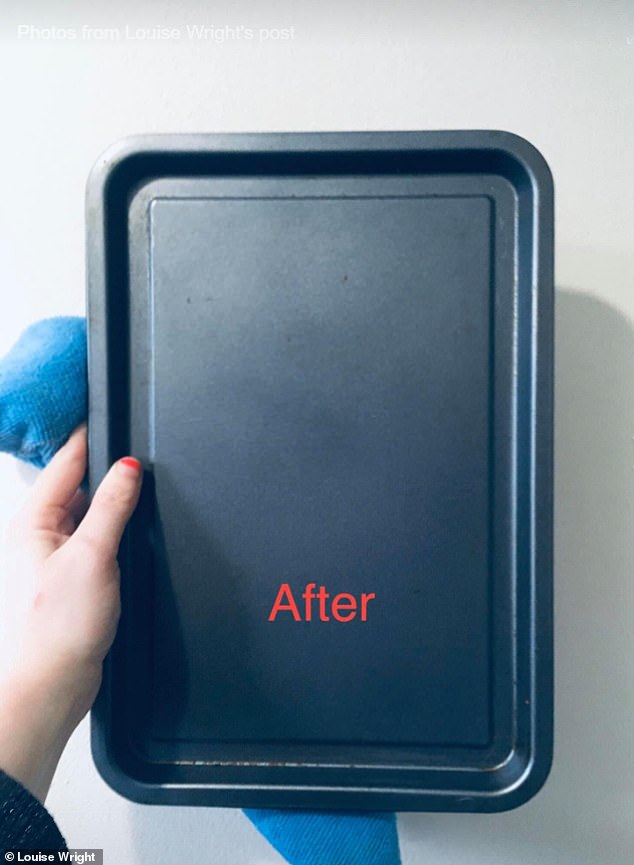 A third who was in disbelief by the concept commented: ‘Is this a joke? I feel stupid if I try it but really want to.’

In the post, which has since racked up over 700 likes, Louise went on to explain her method to those eager to hear more.

‘Rub baking tray with the 2p and then wash in washing up liquid (as you would with daily dishes),’ she penned.

‘It works takes away the burnt marks left from baking/cooking. No more binning and replacing.’

However, it was too late for some, who admitted they had recently thrown out their old trays after struggling to remove the rust.

‘Oh no I binned four yesterday!! Couldn’t get them clean enough,’ wrote one, while a second similarly penned: ‘I binned my tray last week because of this rust.’

A further explained: ‘Literally just bought new pans and threw my old ones. Will definitely give this a go.’

Meanwhile, others expressed how excited they were to try the bargain trick out for themselves.

‘Running to get baking trays out,’ enthused one, while a second commented: ‘Love it, will be spending my day off tomorrow doing this.’