Now advertisers snap up space on soap opera billboards: Savvy TV firms sell slots in the background of scenes in set in Weatherfield and Emmerdale

Bosses at ITV are now using streets such as those in Coronation Street’s Weatherfield to allow advertisers to plug their brand.

This year the much-loved drama was seen offering a glimpse of an iconic Costa Coffee cup and a peek of the Co-op supermarket to viewers.

The new and innovative way of selling their products now allows multi-million brands to sell their items to viewers spending their evening at home in front of the TV.

This year, during a scene from Coronation Street, which saw Michelle, played by actress Kym Marsh, and Robert, played by Tristan Gemmil, walk across a cobbled Weatherfield street, a H.Samuel poster was spotted against a wall.

ITV’s managing director of commercial Kelly Williams, told The Times: ‘The one people often don’t know is that all of the poster sites in the street, like the bus stop — we sell those, every single one of them.’ 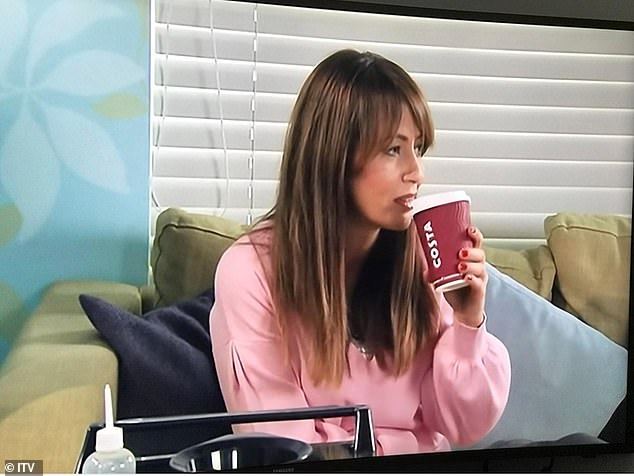 The inventive strategy has not been missed by eagle-eyed viewers who have also noticed a florist on Coronation Street belong to the Interflora network.

According to Mr Williams viewers of the famous soap have not yet complained.

He told The Times: ‘They are arguably the only national poster sites in the country.’

Among the well-known brands that have bought billboard space on the soap are H.Samuel and the fragrance brand Baylis & Harding.