They were alive thousands of years ago, in a time of frequent war, where people were still sacrificed to the gods.

But, incredibly, Mayan civilisations may still have used the same facial expressions we have today.

A study by researchers from California has found that modern-day people can still recognise the emotions of those living up to 3,500 years ago.

Shown only the face of a captured warrior from a Mayan sculpture, people can still figure out that he probably looked sad.

Presented with nothing but the facial expression of a grandmother with a child from a Mayan ceramic, they can guess that she appeared joyful and amused by the infant.

Even seeing the face of someone having to carry a heavy deer over his shoulders, it is possible for 21st century people to work out without context that he’s pretty annoyed about it.

A study by experts from California has found that modern-day people can still recognise the emotions of Mayans living up to 3,500 years ago as depicted by their sculptures, pictured

They wanted to see if facial expressions are natural and unchanging, or if they vary hugely across time and place, and are learned by different societies.

The results appear to suggest that at least some of the feelings on our faces stay largely the same over the centuries.

Dr Alan Cowen, co-author of the study from the University of California, Berkeley, said: ‘Although an ancient Mayan could scarcely imagine the way we live today, they would still recognise the pain, love, determination, sadness, and anger in our faces.

‘That’s pretty remarkable when you think about it.

‘It’s crazy to think that I could make roughly the same face when my wifi freezes as an ancient Mayan warrior who was just taken prisoner by an enemy battalion.’

The researchers, whose study is published in the journal Science Advances, trawled through tens of thousands of ancient sculptures to find a range of human emotions.

The 63 they ended up with presented people in eight contexts – holding a baby, in fighting stance, playing sport, playing music, embracing someone, being held captive or tortured, and carrying a heavy object.

Some participants were asked to look only at the faces in the sculptures, without knowing the situation they were in, and match them to a list of 30 emotions.

Others identified the emotions from the context, such as someone being tortured.

It emerged that five emotions seemed to echo across the centuries.

On average, people could work out if someone was in pain, usually because they were being tortured, and if they were angry, often in the context of war. 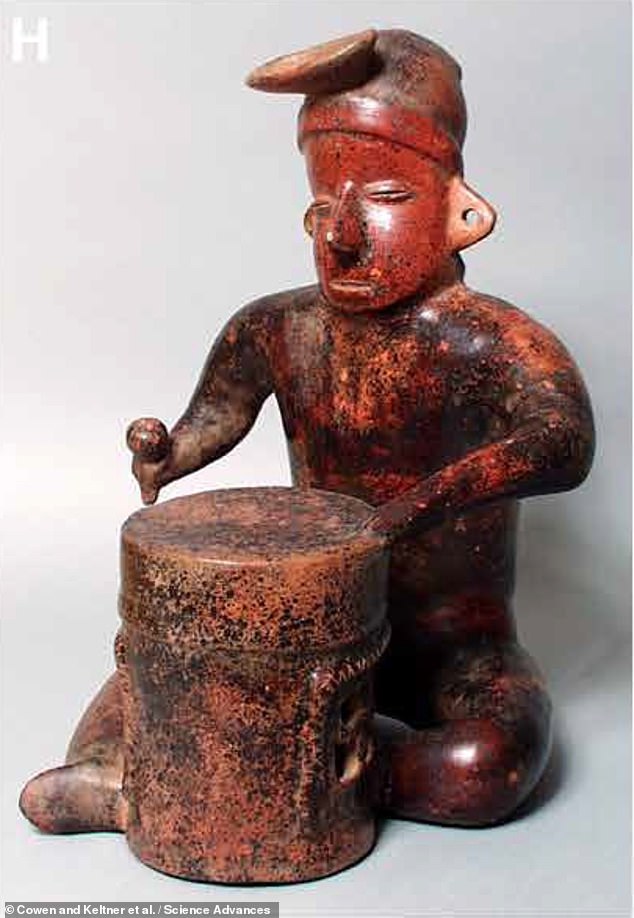 Dr Alan Cowen, co-author of the study from the University of California, Berkeley, said: ‘Although an ancient Mayan could scarcely imagine the way we live today, they would still recognise the pain, love, determination, sadness, and anger in our faces. ‘That’s pretty remarkable when you think about it’

Sculptures of people showing determination – or simply lifting something heavy like a large stone or a deer – were clearly identified by people as showing effort in their faces.

Previous studies which have tried to determine if facial expressions are universal tended to ask people in remote communities, such as cut-off African villages, to identify the emotions of people from western countries.

The problem with this approach is that these people may have had contact with western people or media, so have a clue to the answer.

They may also have figured out what they were expected to say from the western scientists doing the experiment.

WHO WERE THE MAYANS? A POPULATION NOTED FOR ITS WRITTEN LANGUAGE, AGRICULTURAL AND CALENDARS