Veteran TV presenter Ray Martin has come under fire for dropping the N-word twice during SBS’s broadcasting of the royal wedding.

Martin was co-hosting the public broadcasters free-to-air coverage of the royal wedding on Saturday night with Ms Myf Warhurst and Joel Creasey when the gaffe happened.

He was discussing with his co-hosts how far the Royal Family’s attitudes towards race has changed for the better when he used the N-word not once, but twice.

Martin used the slur while telling a historical anecdote about Prince Philip.

He attempted to point out how the wedding of Prince Harry to Meghan Markle, who has African heritage, symbolised a shift in attitudes towards race.

His comments were removed from the recorded version of the program, which can be watched on SBS On Demand, following an ‘editorial judgement,’ The Sydney Morning Herald reported.

Taking to social media, users also questioned the broadcaster over his decision to call the cellist, Sheku Kanneh-Mason, a ‘black boy’ during the coverage.

In a statement to Fairfax an SBS spokeswoman said the discussion about Prince Philip’s use of the word: ‘highlighted the positive cultural changes that have occurred, with the commentary that immediately followed from both presenters indicating that these terms are unacceptable.’ 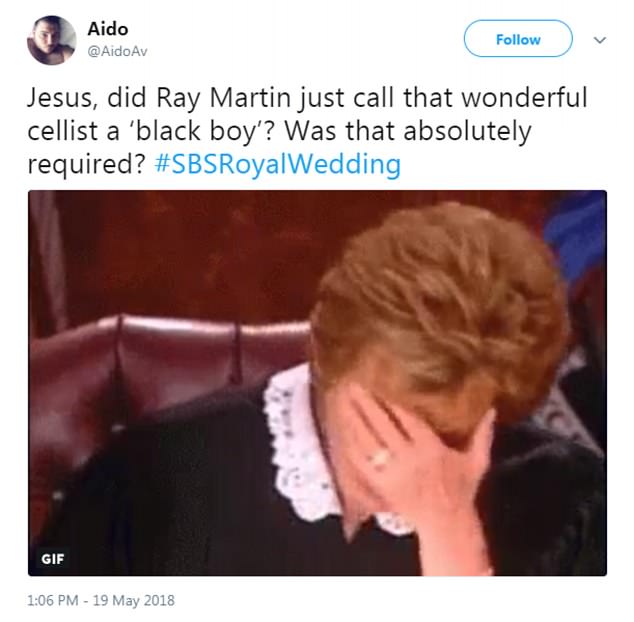 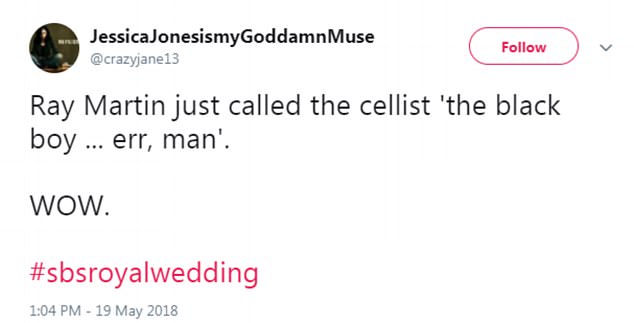 She said the broadcast had not received any formal complaints and said Martin was using the term ‘within its reported historical context.’

Prince Phillip has been known to have made a few high profile gaffes in recent years.

In 2003 Prince Phillip told the President of Nigeria, while he was dressed in traditional robes, ‘You look like you’re ready for bed.’

On a tour of Australia in 2002 The Prince asked Aboriginal Elder William Brin in Queensland, ‘Do you still throw spears at each other?’