A much-loved Australian cycling icon says his sudden sacking over a mystery breach of behaviour left him an ’emotional wreck’ – and alleged that his age ended his career.

SBS television presenter Michael Tomalaris was asked to leave the network in mid-October after 34 years there, leading to a two-week downward spiral he said caused him ‘unstable’ mental health.

Mr Tomalaris’s former colleagues and hundreds of cycling fans took to social media and directly messaged him with an ‘outpouring of goodwill’, but also bemusement at the decision.

Mr Tomalaris covered cycling, football and presented SBS World News. But he is best known as the passionate host of SBS’s annual Tour de France race coverage, worrying some fans that the station might wind back its cycling offerings.

Popular SBS television presenter Michael Tomalaris believes he was sacked by the network because of his age, while admitting the official reason was for a breach of the SBS employee code of conduct. He is pictured with SBS journalist Catalina Florez 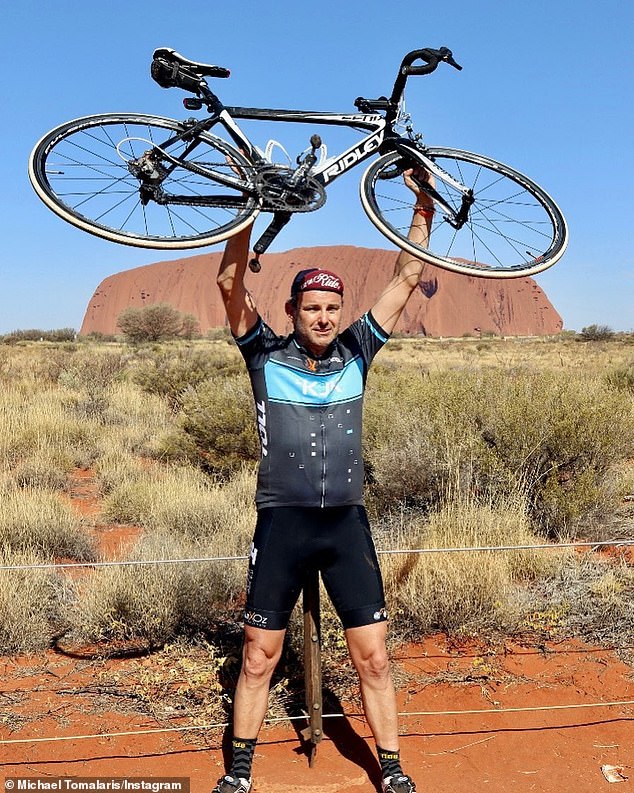 Mr Tomalaris has worked in SBS’s world news team and as a football commentator but he is best known as host of the network’s respected Tour de France coverage. He is pictured cycling at Uluru

Others felt as the public broadcaster should explain what aspect of the code of conduct was breached.

Mr Tomalaris, 60, confirmed he had been dismissed over a breach of the SBS code of conduct, but would not elaborate.

‘All I can say is the breach was so minor it didn’t warrant the threat of termination of contract or forced resignation,’ he told Daily Mail Australia.

He claimed to have been given ‘no warning [or] notice’ and that his ‘offence’ involved ‘no bullying, no fraud, no abuse of any description, no theft, no racism.

‘They basically forced me out.’

After a ‘dark’ two weeks where thoughts of self-harm entered his mind, Mr Tomalaris said he got angry.

‘Even though I never considered doing any damage to myself, it did cross my mind for the very first time,’ he said, admitting his mental health became ‘unstable’.

He believes the broadcaster showed him the door for a breach of a contract because at his age it was ‘the cheapest option’.

The sudden departure this week of @miketomalaris has left his colleagues and many friends at @SBSNews bereft. You’d have to search long and hard to find a nicer fella in broadcasting. And who’s going to sneak in a plug for pro cycling in the news now?

@SBSSport A full explanation pls re the sudden ‘departure’ of the best cycling events host, Michael Tomalaris, that this country’s ever had. You owe it to him & also to the hordes of cycling fans who tune in to your broadcasts. Does this signal the end of cycling coverage on SBS?

I can vouch for Mike as a person and a journalist, having known him for many years. His professionalism and integrity is without question. He is a strong character and will bounce back bigger and better. The outpouring of goodwill for him says it all. https://t.co/p5z2hwOj86 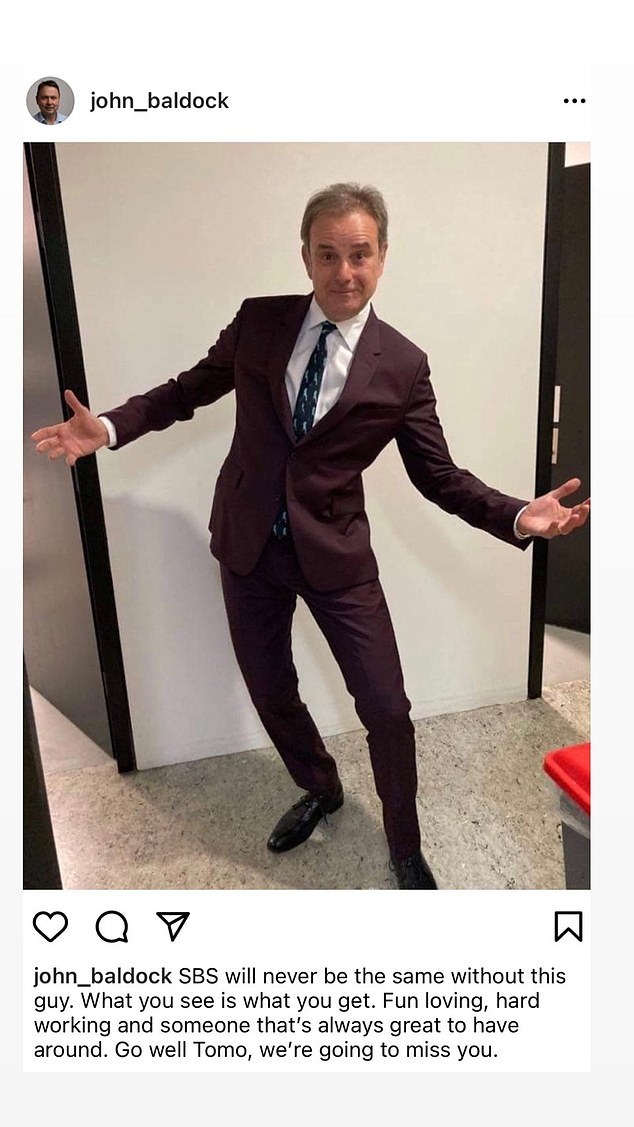 ‘Mr Tomalaris was a long-standing member of our news and sport teams, and SBS was committed to his ongoing role and had no plans to change our presenting line-up,’ an SBS statement said.

‘Any suggestion otherwise is untrue and at odds with our growing commitment and investment in major cycling events, and his expanded role as a sports presenter on SBS News.

‘We wish him well as he moves on from the network.’

The presenter was dismissed under a breach of the code of conduct, not in relation to the network’s code of practice.

It is understood the SBS code of conduct relates to the standards of workplace behaviour on the job for SBS employees.

You were the last of that group, with Les Murray, Johnny Warren, Paul Williams, Craig Foster, Francis, Simon Hill, Andrew Orsatti, Mieke Buchan, Andrew Paschalidis & Scott Peterson and now you gone from SBS too. Feels like SBS lost all it’s soul with you too no longer there. 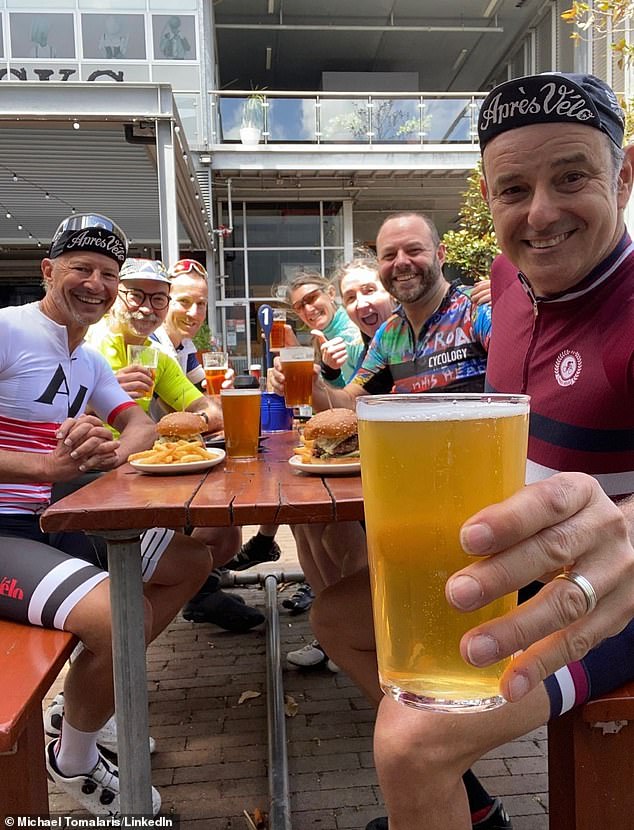 Mr Tomalaris admitted on social media he disappeared into a ‘black hole’ after being sacked.

‘I was in turmoil. An emotional wreck,’ he said. Mr Tomalaris told Nine ‘who knows’ where he’d be without the support of love ones.

Mr Tomalaris admitted the ‘staggering’ support of fans and colleagues and riding 400km a week with friends has turned things around for him.

‘I literally received thousands of personal messages – not to mention the wave of notices on various social media platforms.’

Among those who publicly expressed support for Mr Tomalaris were current SBS World News anchor Anton Enus, who said he felt ‘bereft’ at the news on Twitter.

Mr Tomalaris plans to continue in broadcasting and is also on a mission as a cycling advocate to get ‘as many bums in saddles’ as possible.

For confidential 24-hour support in Australia call Lifeline on 13 11 14. 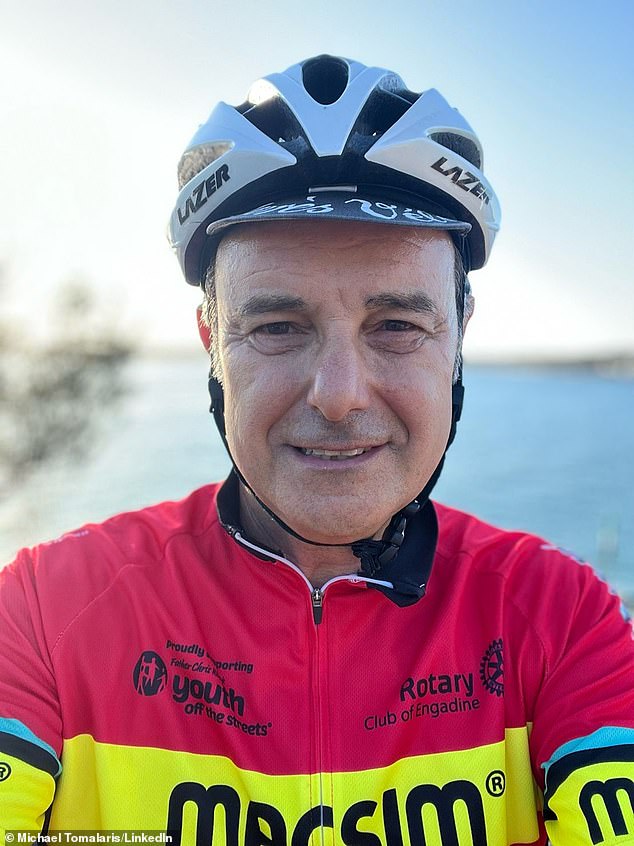 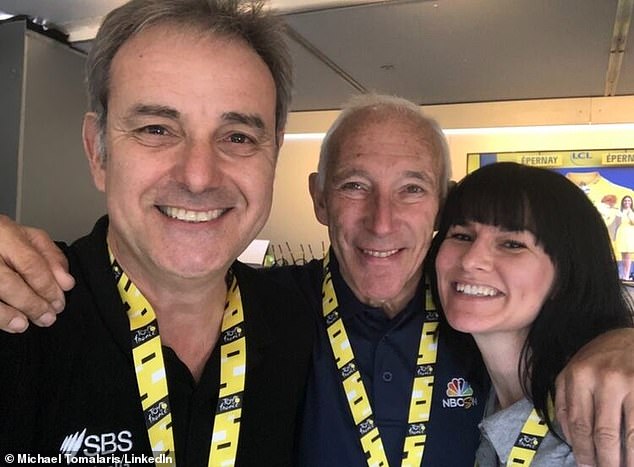