Bizarre moment a passerby calls out ‘Nice rampage, buddy’ to man accused of randomly smashing cars with a metal pole – as he walks free from court on bail

A man accused of randomly smashing passing cars with a metal pole on Saturday night has walked free on bail before acknowledging a passerby who yelled at him, ‘Nice rampage, buddy!’

The accused, Ross Cameron Males, 40, cursed and hurled abuse at reporters who waited for him to leave Northbridge Magistrates Court in Perth, Western Australia after his appearance.

Police allege that Males damaged several cars, breaking the glass on one, at the intersection of West Coast Highway and Scarborough Rd at Scarborough at about 5pm on Saturday night.

He was arrested at the nearby Ramada Hotel shortly after the incident and subsequently charged with four counts of criminal damage or destruction of property before being placed on bail.

He was charged with four counts of criminal damage or destruction of property.

Ross Cameron Males (pictured centre), 40, cursed at reporters as he left Northbridge Magistrates Court on Monday after he was granted bail. He is accused of smashing cars on Christmas Eve

When confronted by reporters, Males jested ‘Did I do something wrong in Scarborough?’

Males’ outburst continued when asked if he had seen the footage of his alleged smashing of cars, telling the media, ‘Is everyone seeing this footage? You f****** idiot c****.’

After reportedly trying to evade questions in a convenience store, Males then returned to the street to try and dodge the reporters.

‘I’m going to fight this bloke in a minute if he doesn’t get out of my way,’ Males said, pointing at a 9News camera after being asked if he will fight the charges.

Males, who was wearing similar clothes as to when he was arrested, was then recognised by a passerby who yelled out at him, ‘Nice rampage, buddy.’

‘Cheers cobber,’ Males responded, turning to wave at the man. 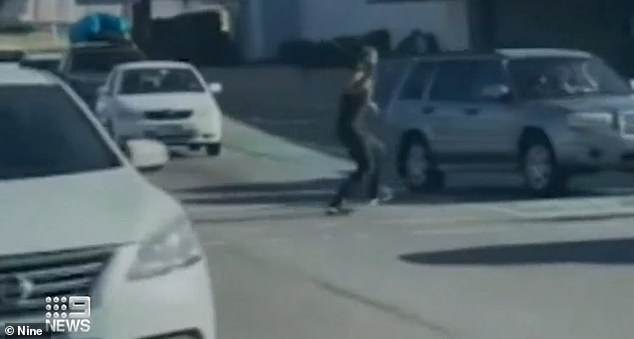 Police will allege footage of the incident shows Males using a metal pole to randomly strike passing cars, many running red lights and mounting curbs to escape the rampage

Males will be required to report to police twice a week and reside at the Ramada Hotel where he has booked until March 23.

He will face court on February 11.

Police urge anyone with information involving the incident, or who had their car damaged in the incident, to make a report by calling 131444 or go to their local police station.