Scarlet fever cases rocket to the highest levels since the 1960s

Scarlet fever cases have rocketed to the highest levels since the 1960s, new figures reveal.

Since mid-September last year, at least 11,981 cases of the bacterial infection have been reported, compared to an average of 4,480 incidences over the past few winters, according to health officials in England.

Although the exact cause of the rise in scarlet fever cases is unclear, experts believe it may be the result of increased awareness and reporting.

Scarlet fever, which typically affects those under 10, was a major cause of childhood death during the Victorian era and can lead to life-threatening pneumonia or sepsis if antibiotic treatment is delayed.

Professor Helen Stokes-Lampard, chair of the Royal College of GPs, said: ‘Scarlet fever used to be a lot more common than it is now, but GPs are noticing more cases than in previous years at the moment.

‘If a patient thinks that they, or their child, might have symptoms, they should seek medical assistance.’

Scarlet fever cases have rocketed to the highest levels since the 1960s, figures reveal (stock)

What is scarlet fever and what are the symptoms to look out for?

Scarlet fever is a bacterial illness that mainly affects children. It causes a distinctive pink-red rash.

The illness is caused by Streptococcus pyogenes bacteria, which are found on the skin and in the throat.

First symptoms of scarlet fever include a sore throat and fever which may be accompanied by a headache, nausea and vomiting.

Between 12 to 48 hours after this, a characteristic fine, sandpapery rash develops, often appearing first on the chest or stomach.

Other symptoms include a white coating on the tongue, which peels a few days later leaving the tongue red and swollen (this is known as strawberry tongue).

Cases are more common in children although adults of all ages can also develop scarlet fever.

Individuals who think they or their child may have scarlet fever should consult their GP.

Scarlet fever is not usually serious

Dr Nick Phin, deputy director at Public Health England, said: ‘It’s not uncommon to see a rise in cases of scarlet fever at this time of year.

‘Scarlet fever is not usually a serious illness and can be treated with antibiotics to reduce the risk of complications and spread to others.

‘We are monitoring the situation closely and remind parents to be aware of the symptoms of scarlet fever and to contact their GP for assessment if they think their child might have it.

‘Whilst there has been a notable increase in scarlet fever cases when compared to last season, greater awareness and improved reporting practices may have contributed to this increase.’ 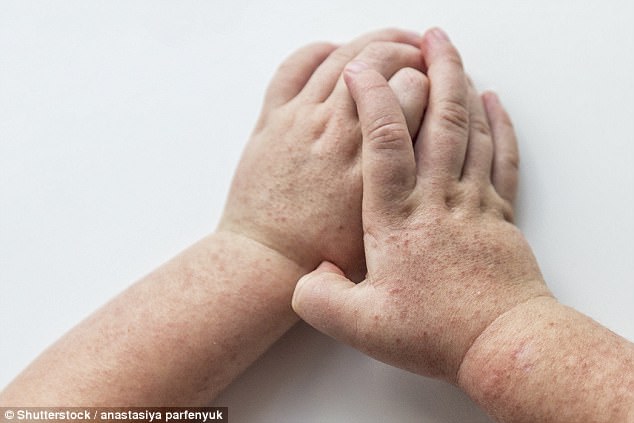 This comes after figures released last month revealed the number of measles cases in Europe rose by 400 per cent in 2017 compared to the previous year.

The life-threatening infection affected 21,315 people last year, resulting in 35 fatalities, the figures add. This comes after a record low of just 5,273 incidences in 2016.

Dr Zsuzsanna Jakab, regional director for Europe at the World Health Organization (WHO), said: ‘Every new person affected by measles in Europe reminds us that unvaccinated children and adults, regardless of where they live, remain at risk of catching the disease and spreading it to others who may not be able to get vaccinated.’

Poor vaccination rates are thought to have led to epidemics in Romania, Italy and Ukraine.

To prevent an outbreak, 95 per cent of the population should be immunised.

The WHO claims people’s fear of jabs, means many, particularly young children, are unprotected.

This fear could be attributed to disgraced gastroenterologist Andrew Wakefield’s theory in 1995 that the measles, mumps and rubella (MMR) vaccine is linked to bowel disease and autism. His controversial views have since been widely discredited.