Adam Schiff said Sunday Democrats are hesitant to make a witness deal because they feel the defense will use the opportunity to ‘smear’ Donald Trump’s political opponent Joe Biden.

He also claimed in an interview on NBC’s Meet the Press on the first day off since the Senate impeachment trial commenced Tuesday that he ‘isn’t afraid of anything’ in regards to Trump’s legal team being permitted to call whichever witnesses they desire.

‘If they’re irrelevant, what are you afraid of? Won’t that be exposed?’ NBC host Chuck Todd asked the prosecution’s lead impeachment manager.

‘Well it’s not a question of what I’m afraid of. I’m not afraid of anything,’ Schiff asserted. ‘The question is should the trial be used as a vehicle to smear his opponent? Is that the purpose of a Senate trial? Or is it to get to the truth?’ 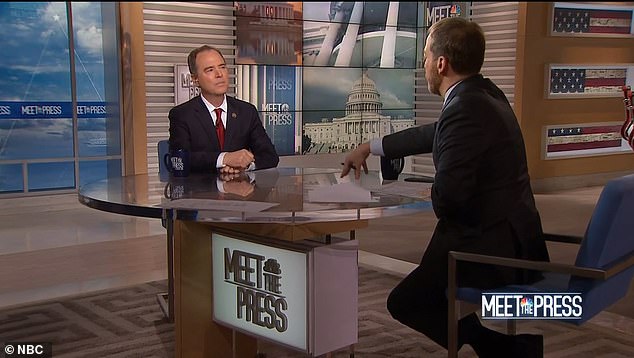 He claimed, however, in his interview with Chuck Todd that Trump would use the opportunity to ‘smear’ his political opponent Joe Biden 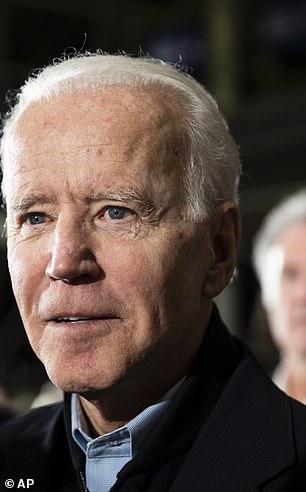 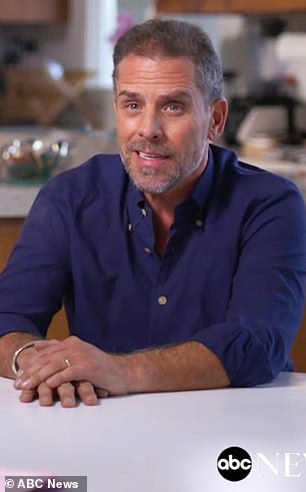 Trump wants former Vice President Joe Biden, a Democratic presidential front runner, and his son Hunter Biden to testify in the Senate trial for potential corruption in Ukraine. Democrats insist their testimony would be ‘irrelevant’ to the impeachment trial

Hunter found himself immersed in the Genesis of the impeachment trial stemming from his position on the board of Ukrainian natural gas firm, Burisma Holdings – a post he held from 2014 until he stepped down in 2019.

He took the job while his father was still vice president, and Trump said in a July 25 call with his Ukrainian counterpart that he felt Joe Biden had engaged in a conflict of interest and that the potential corruption should be investigated.

Democrats claim millions in military aid to Ukraine was made contingent on Ukrainian President Volodymyr Zelensky announcing that investigation – which they claim was a political move to hurt the front runner Democratic presidential candidate.

The Senate impeachment trial, which debates the two articles – abuse of power and obstruction of Congress – commenced opening arguments Tuesday.

Majority Leader Mitch McConnell vowed that after opening arguments concluded the Senate would vote on whether to permit additional witnesses to be called or new documents to be subpoenaed.

But Republicans warn if Democrats are allowed to call witnesses like acting Chief of Staff Mick Mulvaney and his aide Robert Blair, who was present during the infamous phone call, then the defense would also be permitted to call those they desire to question.

Trump attacked Schiff in a series of tweets Sunday morning, claiming he has ‘not paid the price, yet’ for spearheading the impeachment proceedings

Trump’s defense has floated calling the Bidens, the anonymous whistle-blower whose report on the call led to the impeachment inquiry and Schiff – which they claim would be a fact witness.

‘Where are you on witness reciprocity?’ Todd asked the California Democrat.

‘Well, the Senate can make whatever decision the Senate can make, and the American people can judge that decision,’ Schiff admitted. ‘But if we’re talking about a fair trial, if the senators are going to give content to their oath to be impartial administrators of justice, they can’t say, ‘Well, we’re going to allow the president to trade witnesses that don’t shed any light on the facts, but would allow him to, once again, try to smear his opponent. We’re going to make that the pound of flesh. We’re going to make that the cost of calling relevant witnesses.’