Drew Povey, who was head teacher during the TV series, quit in September. He is pictured in an undated publicity photo from Channel 4’s Educating Greater Manchester

­­­­­­­­­­The school from the Educating Greater Manchester TV series that was rocked when its ‘inspirational’ head was suspended then quit has been put in special measures by Ofsted, who say it is ‘failing its pupils’.

Drew Povey, who was head teacher during the Channel 4 TV series, quit in September after he was suspended alongside three other staff members due to ‘administrative errors’.

The new Ofsted report was released on Monday and found Harrop Fold School, in Little Hulton, inadequate in all areas. Inspectors said the school is ‘failing its pupils’ and ‘significant and wide-ranging weaknesses have developed over time’ that require urgent improvement.

An earlier report in 2013 rated it good.

In his resignation letter two months ago, Mr Povey said he took full responsibility for the errors – which involved how attendance, exclusions and home schooling were being recorded – but claimed he had been unfairly treated.

He wrote on Twitter: ‘I am at a loss to understand the heavy handed approach adopted by the council, which appears to have completely ignored the best interests of the students, staff and school.’

Speaking to the Manchester Evening News, he claimed he had been a ‘thorn’ in the side of Salford Council over the rising levels of debt he says the school racked up under its direction.

‘It’s fair to say that I’ve been a thorn in the side of Salford council since I became headteacher,’ he said. ‘I have not kept my mouth shut about the debt, or the impact of the debt on the kids, staff and community.

‘People also believe that in some way this may be connected to the fact that we didn’t go into the Salford Academy Trust – but who knows. They have used this administration error to get what they really wanted – which was me out.’ 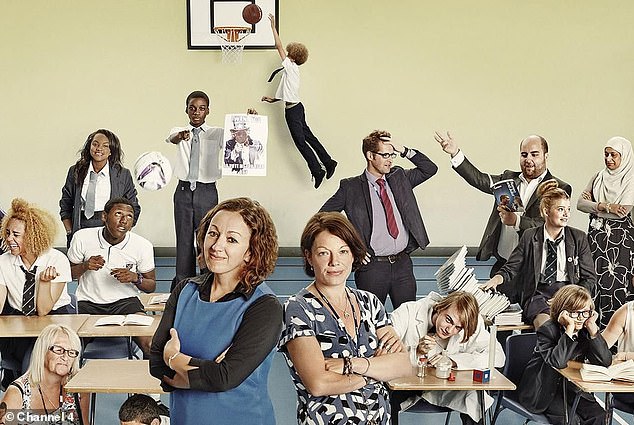 The Ofsted report released on Monday found Harrop Fold School, in Little Hulton, inadequate in all areas. Pictured: An undated publicity photo showing staff and students at the school

Following the Ofsted report, council officials said the Department for Education (DfE) will now identify an experienced academy sponsor to support the school, which has 860 pupils aged 11 to 16.

Ofsted said he has started to address the school’s problems.

In a letter to parents published online, Mr Owen and councillor Kate Lewis, chairwoman of governors, said staff were disappointed by the report but determined to ‘improve the school rapidly’.

He said: ‘Practices include the inappropriate, informal exclusion of pupils, deliberate mis-recording of attendance and weak practice in staff recruitment.

‘This has potentially compromised the safeguarding of pupils as leaders and staff have not been in a position to ensure that they are safe.

‘I want to reassure all parents that, since the start of the September term, the interim senior leadership team provided by the local authority has stopped these practices.’ 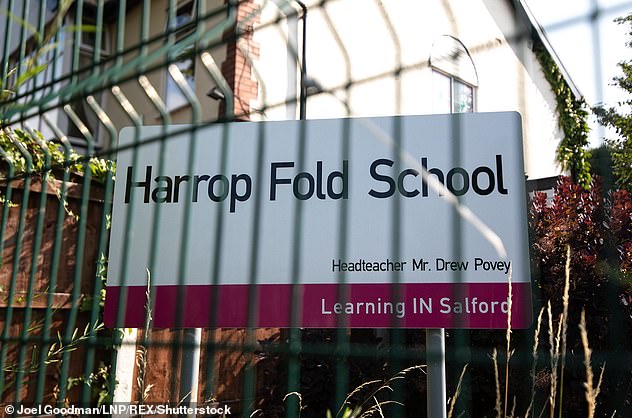 The new inspection report said the school is ‘failing its pupils’. Pictured: The school on July 19 – when it was closed after parents ‘went on strike’ over Mr Povery’s suspension

Mr Merry added: ‘I know there is a committed and hard-working team at Harrop Fold who want to do the very best for pupils.

‘They should draw positives from the report, in which Ofsted says new approaches introduced in many aspects of school life are having a real impact, even if they are at an early stage.

‘It is important the whole school community gets behind the changes and works to common goals.

‘There has been a lot of speculation in the community regarding hidden agendas.

‘Once again I want to reaffirm to everyone that the school, governors and local authority all want the same thing – for Harrop Fold pupils to be happy, safe and achieve their best.’