The terminally ill man who won $289 million in a landmark verdict against the agrochemical giant Monsanto is speaking out for the first time.

Dewayne Johnson, 46, who worked as a groundskeeper for a school district in Benicia, California, won the large settlement after a jury found that the weedkiller Roundup played a large role in causing his cancer.

Johnson, a married-father-of two, doesn’t have long to live, having been diagnosed with non-Hodgkin’s lymphoma – a cancer that starts in the white bloods cells – in August 2014, which has since spread.

Monsanto plans to appeal the verdict and the compensation will only be released when this has been heard, meaning Johnson may not live to see his payout.

However, in an interview with CBS This Morning, Johnson said he’s happy about the trial’s outcome because he didn’t want to ‘die for nothing’ and to make sure others were warned about the potential danger of using the weedkiller.

Dewayne ‘Lee’ Johnson, 46 (pictured), is speaking out for the first time since jurors awarded him $289 million in damages in his trial against agrochemical colossus Monsanto 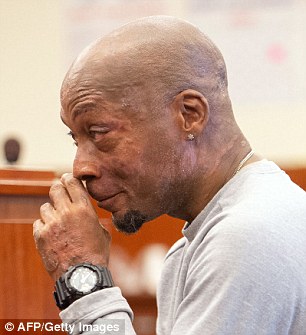 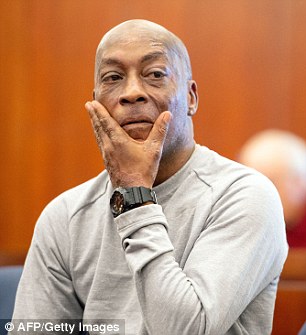 The jury found that the weedkiller Roundup played a large role in causing Johnson’s on-Hodgkin’s lymphoma – a cancer that starts in the white bloods cells. Pictured, left and right: Johnson hears the verdict read in court 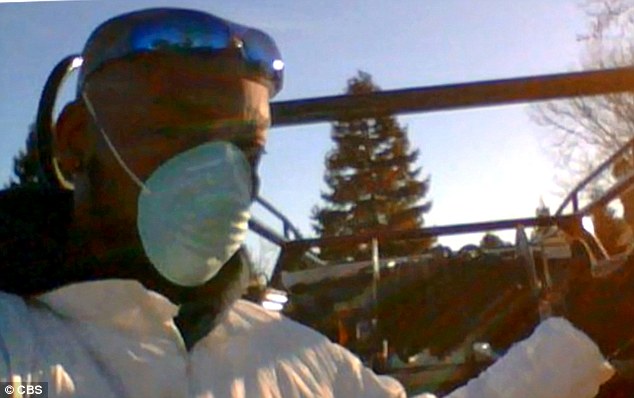 As a former groundskeeper for a school district in Benicia, California, from 2012 through mid-2015 (pictured), Johnson said he mixed and sprayed hundreds of gallons of Roundup to keep grass and weeds under control 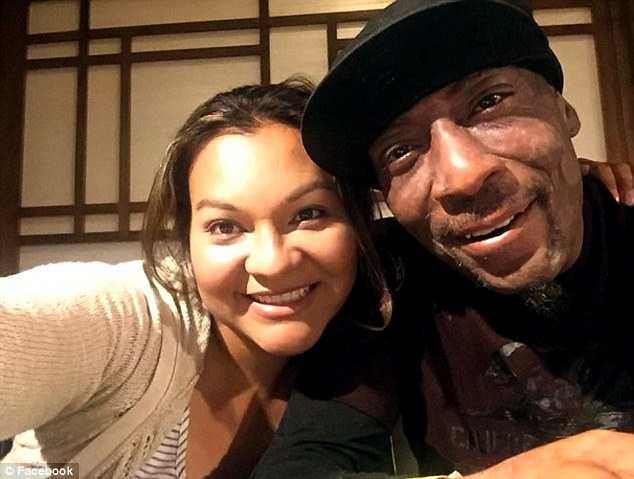 The jury also found Monsanto ‘acted with malice, oppression or fraud and should be punished for its conduct’ towards Johnson. Pictured: Johnson, right, with his wife, Araceli

Johnson worked as a groundskeeper from 2012 through mid-2015, mixing and spraying hundreds of gallons of Roundup to keep grass and weeds under control.

The main ingredient in Roundup is a chemical compound called glyphosate.

Glyphosate is marketed either as a salt or an amber-colored liquid with no smell. Monsanto introduced it in 1974 as an effective way of killing weeds while leaving crops and plants intact.

Glyphosate-based products are sold in more than 160 countries, and farmers use it on 250 types of crops in California alone, which is the leading farming state in the US.

In March 2015, the World Health Organization found that that the herbicide is ‘probably carcinogenic to humans’.

Then, in 2017, California named glyphosate an ingredient that causes cancer under the state’s Proposition 65, which requires Roundup to carry a warning label if sold in California.

One of Johnson’s attorneys, Timothy Litzenburg, told Daily Mail Online in July that Johnson would spray the product between 30 and 40 times per year.

‘One of the things that stuck out to me the worst is when [who is they] told me it was safe enough to drink,’ Johnson told CBS This Morning. ‘Actually, they – it became a joke almost.’ 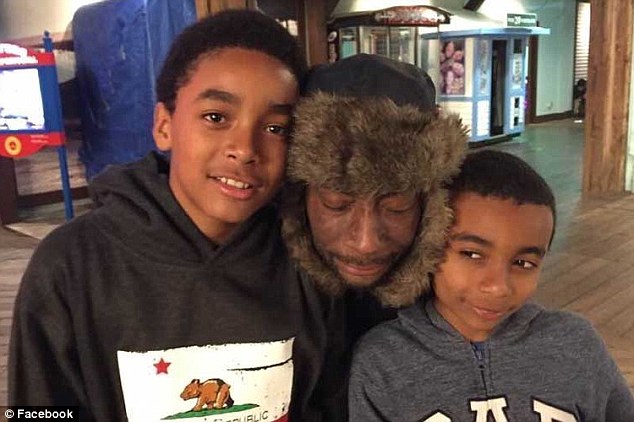 One of Johnson’s attorneys told Daily Mail Online that Johnson (pictured, with his sons) called that in November 2014, his client contacted the company about his diagnosis 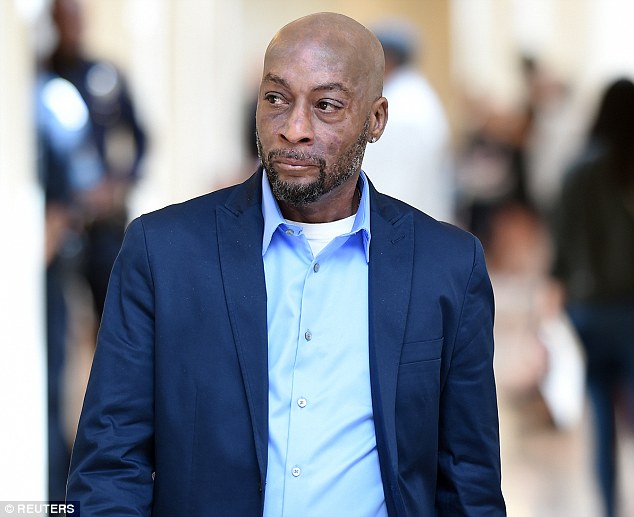 In the first case to reach trial alleging a cancer link from Roundup, Johnson (pictured) said he had to win so Monsanto could be held accountable 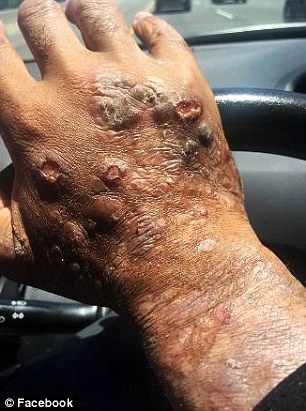 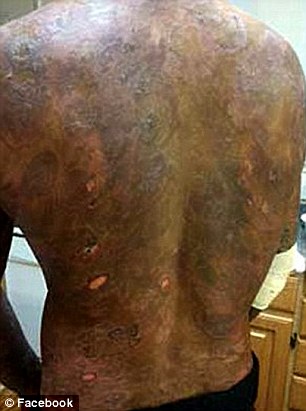 Johnson said that while he was a groundskeeper, he was told Roundup was safe enough to drink and that there was never a day he didn’t get the product on his skin. Pictured: Johnson’s hand, left, and his back, right, covered in lesions

Despite wearing protective gear, Johnson said he was often drenched in the product.

In one exposure accident, he testified that he wasn’t able to shower for six hours

Johnson said that a few months after one accident in which a hose came loose and sprayed Roundup inside his suit, he developed a total body rash.

‘It never went away. And it got worse, and then worse, and worse,’ Johnson said.

In August 2014, he was diagnosed with non-Hodgkin’s lymphoma.

Litzenburg told Daily Mail Online that Johnson called that in November 2014, his client contacted the company about his diagnosis.

THE SAGA SURROUNDING THE SAFETY OF GLYPHOSATE

Glyphosate is an herbicide first registered for use in the US in 1974.

It is marketed either as a salt or an amber-colored liquid with no smell.

Monsanto markets glyphosate as part of the pesticide Roundup.

Several studies found that high doses administered to laboratory animals  caused cancer, although the evidence is ‘limited’ when it comes to humans.

In March 2015, the World Health Organizatrion ranked glyphosate a Group 2a carcinogen, a substance that probably causes cancer in people.

In 2017, California added glyphosate to its proposition 65 list, which requires Roundup to carry a warning label if sold in California.

Monsanto has vehemently denied that its product causes cancer and says and more than 800 studies that have established its safety.

Yet more than 4,000 plaintiffs have filed lawsuits –  800 over the past year – claiming Monsanto made them or members of their family sick.

‘He said: “Hey I just want to let you know I have this and I want to ask ask could it be contributing to my cancer”,’ Litzenburg said.

Johnson’s concerns landed on the desk of Dr Daniel Goldstein, the lead of medical sciences at Monsanto.

According to an internal company email, Dr Goldstein wrote that he intended to call Johnson but never did.

Then, in September 2015, doctors told Johnson that he was likely to die in less than a couple of years, Litzenburg said.

Johnson sue in 2016 and the case was fast-tracked because, under California law, dying patients have a right to an expedited trial.

The eight-week trial began in June and, after three days of deliberations, the jury awarded Johnson $250 million in punitive damages and nearly $40 million in compensatory damages, bringing the total to $289 million.

The jury also found Monsanto ‘acted with malice, oppression or fraud and should be punished for its conduct,’ Judge Suzanne Ramos Bolanos announced in court in San Francisco.

Johnson, whose case was the first to reach trial alleging a cancer link from Roundup, said he had to win so Monsanto could be held accountable.

‘The verdict really meant to me – that this [trial] was not done in vain,’ Johnson said.

‘I remember standing there saying to myself: “If I lose this case, this company is gonna get away” and…they’ll be able to say: “See? Told you our stuff didn’t do that”.’

Monsanto has denied any link with the disease, saying the product has undergone stringent testing and more than 800 studies have established its safety.

After the verdict was announced, Monsanto vice president Scott Partridge said the company is prepared to appeal the decision.

‘We are sympathetic to Mr. Johnson and his family’ he said, adding that ‘[t]oday’s decision does not change the fact that more than 800 scientific studies and reviews…support the fact that glyphosate does not cause cancer, and did not cause Mr Johnson’s cancer’. 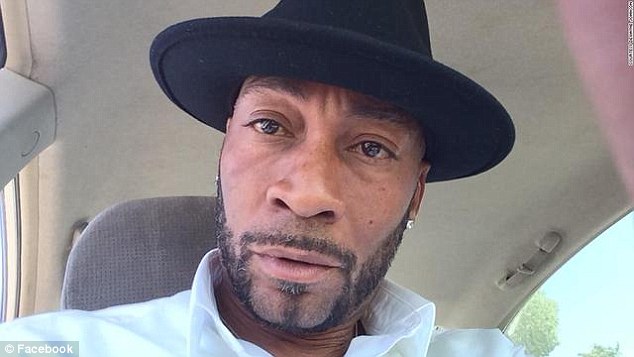 Monsanto plans to appeal and the compensation will only be released when this has been heard, meaning Johnson (pictured) may not live to see his payout 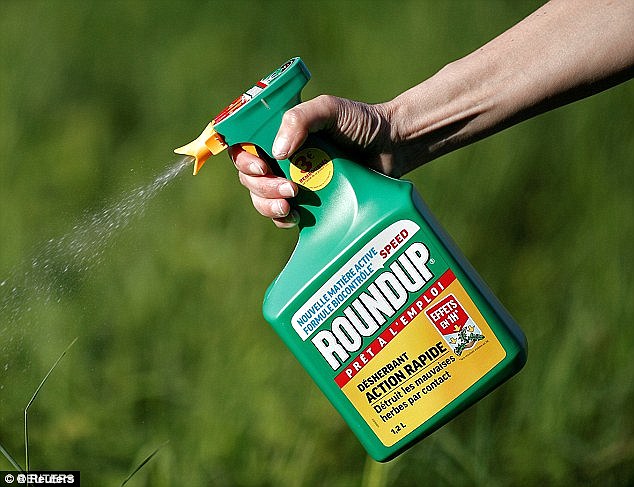 Founded in 1901 in St Louis, Missouri, Monsanto began producing agrochemicals in the 1940s.

It was acquired by German-based pharmaceutical and chemical group Bayer for more than $62 billion in June.

Bayer announced at the time that it would be dropping Monsanto’s name and replacing it with Bayer as the company name.

‘Bayer will remain the company name. Monsanto will no longer be a company name. The acquired products will retain their brand names and become part of the Bayer portfolio,’ Bayer said in a statement to Reuters.

‘Bayer will remain the company name. Monsanto will no longer be a company name. The acquired products will retain their brand names and become part of the Bayer portfolio,’ Bayer told Reuters in a statement

In other words, products like Roundup would retain their name, but be advertised as Bayer’s Roundup, not Monsanto