A father has been caught and fined after carrying five children on his motorbike while speeding down a road in China.

The man in the city of Jinhua claimed that he was taking the children to school.

He explained to the police that he wanted to save money on the children’s school bus service, therefore he decided to take his children and his cousin’s children to school and pick them up like this every day.

A resident of Jinhua, China, took pictures of the man carrying five children on his motorbike

Jinhua Police were alerted of the incident on September 6 after a resident of the city took pictures of the family and uploaded them onto the social media.

The pictures showed the family of six on a motorbike as it travelled on a road.

Two children were sitting in front of the parent, and two behind. The fifth child was sitting on top of the storage rack at the rear of the vehicle.

Although the father wore a helmet, he was riding the bike while wearing a pair of slippers. None of the five children had a helmet on.

The person who took the picture described how the fifth child at the rear bumped up and down as the overloaded motorbike sped down the Changqingshu Road, according to a social media post from Jinhua authority. 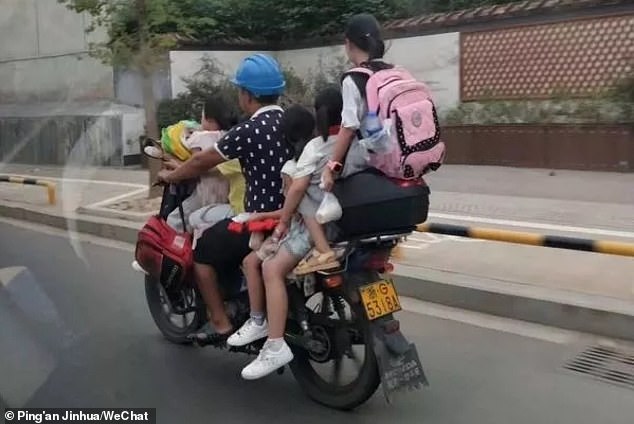 Police quickly tracked down the father in the picture.

The five children are between seven and 13 years old. Three of the children are Mr Lu’s while the other two are his cousin’s children.

Mr Lu was fined by the police for violating traffic rules.

He expressed his regret for his behaviour and vowed to never ride his motorbike like this again, said the police.