Roads are set to temporarily close near schools to deter people from driving when dropping off and picking up their children.

The new plans – which are already progressing in London and Manchester –  will involve blocking off the areas outside schools with cones and barriers.

Instead councils will encourage more eco-friendly ways of getting to school such as walking and cycling, as reported by The Observer.

Schools will reopen on June 1 according to reports, but transport planners are concerned the excessive traffic will create more air pollution and possible gridlock.

Will Norman, London’s walking and cycling commissioner, told the newspaper: ‘It will mean timed restrictions on traffic around schools to allow people to safely walk to school, cycle to school, scoot to school.

A group of children on their way to school. Schools will reportedly open again in June

‘I don’t mind if they are on space hoppers as long as it’s not by car.

‘You need to reduce the amount of traffic to allow pupils and parents to walk safely.’

Mr Norman added that busy roads could be a potential danger to parents and children who are trying to keep two metres apart, as per social distancing guidelines.

How the road closures are implemented and how long they last will be up to the discretion of local authorities.

It comes just a day after Grant Shapps said there will have to be a significant shift in the way people get around as he unveiled a £2 billion package of measures to boost cycling and walking to work.

Mr Shapps told today’s press conference that cycling and walking to work will be key after lockdown because even when some other restrictions start to be lifted, social distancing rules to stay two metres away from other people will remain in place. 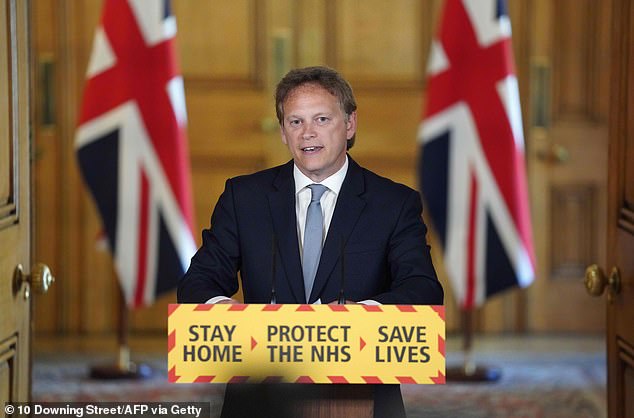 ‘Tomorrow the Prime Minister will set out a road map for the next phase in our strategy to tackle coronavirus,’ Mr Shapps said.

‘In support of this today I am setting out an ambitious programme to help prepare our transport network for the critical role it will play as we emerge from this crisis.

‘Importantly, it is true to say that moving beyond Covid will be a gradual process, not a single leap to freedom.

‘So when we do emerge the world will seem quite different at least for some time.

‘The need to maintain social distancing means that our public transport system cannot go back to where it left off.

‘And here is a very stark fact: Even with public transport reverting to a full service, once you take into account the two metre social distancing rule there would only be effective capacity for one in 10 passengers in many parts of our network. Just a tenth of the old capacity.’

Despite the grim statistics, Mr Shapps said the current situation does present a ‘health opportunity’ and that ‘lasting changes’ can be made to the transport network to make people fitter.

He said: ‘Today I am announcing a £2 billion package to put cycling and walking at the heart of our transport policy.’

The government will publish a national cycling plan in early June but £250 million of the cash will be spent on ‘swift, emergency interventions’ like pop-up bike lanes and wider pavements.

Mr Shapps said there is going to be a ‘once in a generation change to the way that people travel in Britain’.