School shooting survivor David Hogg, who was successful in getting advertisers pulled from Laura Ingraham’s Fox show after she attacked him on Twitter, added that he wants to see her go.

Ingraham announced on Friday’s episode of ‘The Ingraham Angle,’ that she will be n vacation and off air next week. By nightfall Hogg told the Daily News, ‘I would love to see her go.’

The Parkland school shooting survivor added he is not accepting Ingraham’s Twitter apology for the ‘bullying’ comments she made earlier in the week about college rejections Hogg had received. 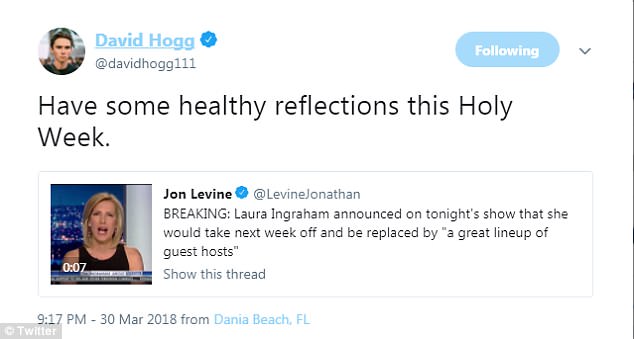 Earlier Friday David Hogg took to Twitter to bid farewell to Fox Host Laura Ingraham who announced she would go off air next week, days the two sparked controversy online

In her apology tweets Thursday, Ingraham included a clip of her own interview with Hogg.

‘That’s what she does when she tries to apologize to me, she promotes her own show? Really?’ Hogg added.

He then added of the advertisers that have pulled from her show: ‘I’m a 17-year-old kid, she’s bullied people before and I think people are just sick and tired of it,’ he said.

‘She needs to acknowledge what she has done wrong.’

On Friday Ingraham shared on her program she will take a pre-planned break for the Easter holiday with her children.

When Ingraham announced Friday that she would be going away with her children for the Easter break, Hogg tweeted ‘Have some healthy reflections this Holy Week’ echoing Ingraham’s own words of apology that she offered after Hogg’s boycott saw her lose 11 of her show’s advertisers. 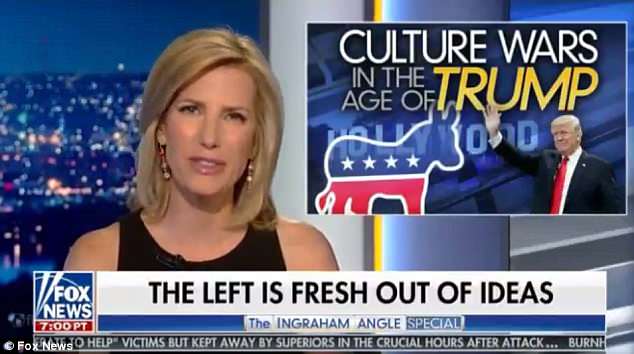 Laura Ingraham, pictured above, announced Friday she will take a vacation next week, just days after Parkland shooting survivor Hogg boycotted 11 of her show’s advertisers 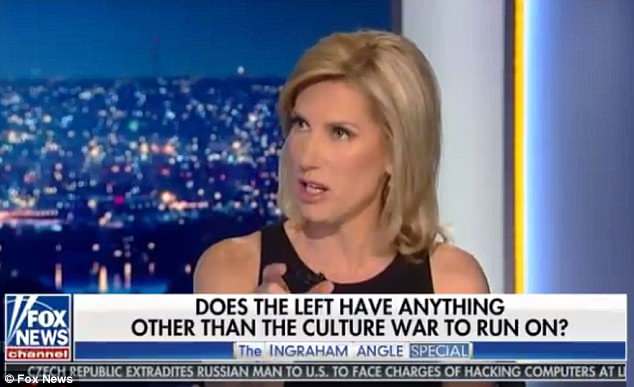 The Fox personality was mum on the subject of her clash with Hogg on her Friday episode of the Ingraham Angle, pictured above 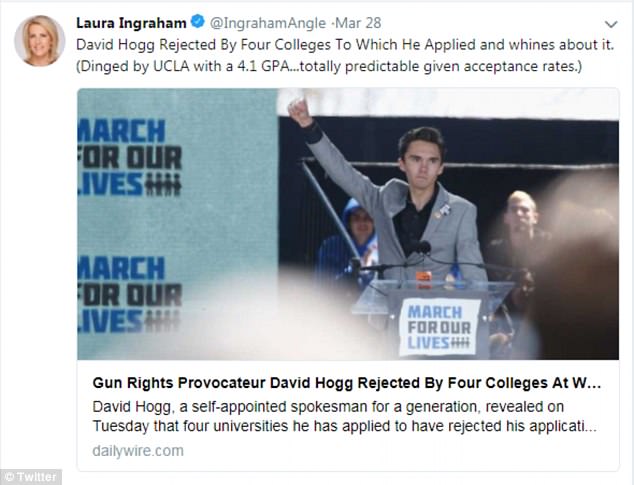 In her Friday evening segment she did not address her online clash with Hogg.

Ingraham sparked trouble on Wednesday when she took to Twitter to mock Hogg.

She wrote: ‘David Hogg Rejected By Four Colleges To Which He Applied and whines about it’.

Hogg is a survivor of the Marjory Stoneman Douglas High School shooting that took place on February 14, killing 17.

He filmed the horror that unfolded as students hid under desks during the shooting and went on to become an activist for gun reform afterwards.

She apologized days later saying ‘On reflection, in the spirit of Holy Week, I apologize for any upset or hurt my tweet caused him or any of the brave victims of Parkland’.

She added on Thursday that she thought she was the first to feature Hogg on her show after the shooting saying ‘he’s welcome to come on my show anytime for a productive discussion.’

But that was only after Hogg had mobilized a boycott of her advertisers, tweeting out a list of their names and encouraging followers to call and request the companies to drop her program.

So far, 11 companies have obliged. 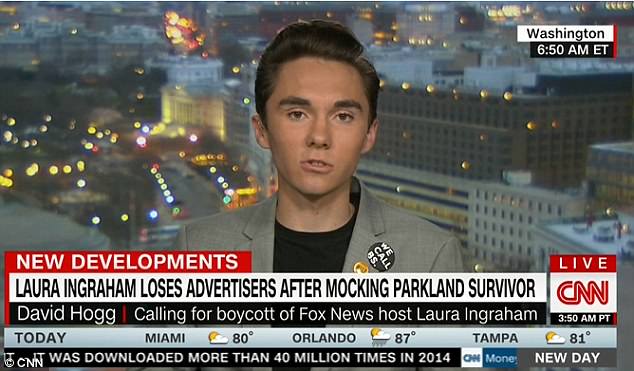 Taking his stance: Hogg spoke out against her comments on CNN on Friday saying ‘When people try to distract like what Laura is trying to do from what the real is issue is, gun violence in America, it’s not only is sad but wrong’ 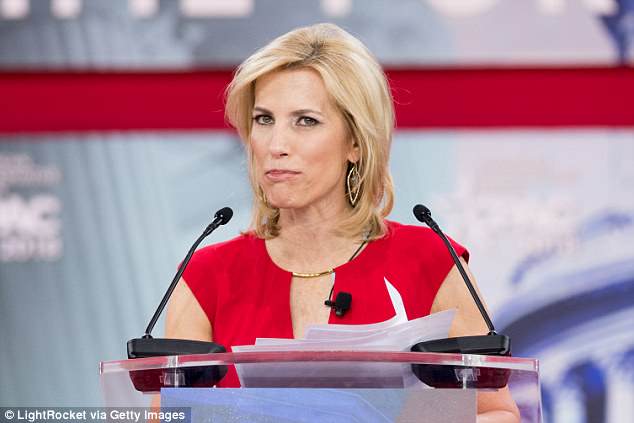 After she released the tweet, Hogg  launched an online boycott of her advertisers that has already seen 11 companies pull out of her show as of Friday

Hogg has refused to accept her apology and the Fox host has come under fire on CNN and MSNBC on Friday for her actions.

On MSNBC’s the Morning Joe the panel agreed that the decision to mock Hogg over a video in which he detailed the schools which did not accept him was in poor taste and very poorly timed.

Donny Deutsch was the most fired up of the group and did not hold back as he went after Ingraham, stating at one point that she needed to ‘shut up and dribble.’

Hogg spoke to New Day on Friday saying he believes Ingraham is just trying to distract from the gun violence he and other students strive to end.

‘She’s only apologizing after a third of her advertisers pulled out, and I think it’s really disgusting the fact that she basically tried promoting her show after apologizing to me,’ said Hogg.

‘I think it’s great that corporate America is standing with me and the rest of my friends,’ said Hogg during an appearance on New Day.

‘When you come against any of us, me or anyone else, you’re coming against all of us. It is important that we stand together as corporate and civic America and show them they cannot push us around, especially when all we’re trying to do here is save lives.’

He continued: ‘When people try to distract like what Laura is trying to do from what the real is issue is, gun violence in America, it’s not only is sad but wrong. I would say from a journalistic perspective, she needs to stand out.’

Hogg then closed out by stating: ‘The issue is gun violence in America. She is trying to distract from that, and I hate it.’ 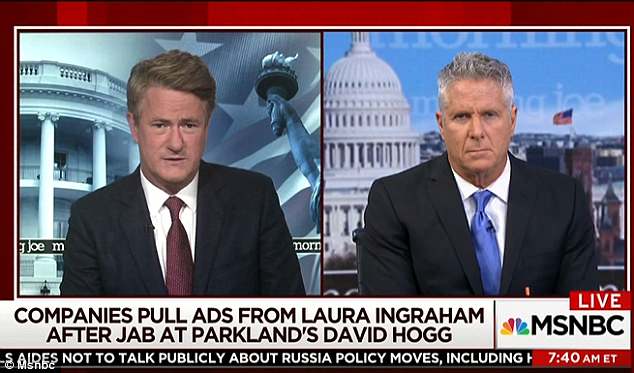 Morning, Laura: Donny Deutsch both mocked and attacked Ingraham on Morning Joe (above), saying she needed to ‘shut up and dribble’

Farewell: Hogg believes Ingraham only apologized after a ‘third of her advertisers pulled out,’ though as of Friday only nine were reportedly boycotting

It was a far livelier discussion over on Morning Joe, where the conversation was dominated by Joe Scarborough and Deutsch.

‘I’ve got kids that are older than they are. Who thinks that attacking children, who thinks that spreading false information about children which has not only been spread on conspiracy sites but also on mainstream media sights, who thinks that is going to help them get ahead politically when it’s so obvious it’s only going to blow up in their faces?’ asked Scarborough.

‘Let’s add on attacking children who are two weeks out from hiding under their desk or watching their friends be shot by an automatic weapon,’ pointed out Deutsch.

‘So if you can’t have empathy or sympathetic behavior or parental human behavior towards children in general, particularly children coming off a horrific trauma – we can’t have animals on the air attack children.’

In the wake of Ingraham’s tweets, Hogg responded on Thursday via Twitter that he would only accept an apology should she denounce her treatment of the Parkland student activists rallying for gun reform.

‘I 100% agree an apology in an effort just to save your advertisers is not enough. I will only accept your apology only if you denounce the way your network has treated my friends and I in this fight,’ he wrote.

‘It’s time to love thy neighbor, not mudsling at children,’ he added.