Cooper Caffrey was among dozens of students at Madison High School, in Middletown, who received detention after they took part in the March 14 protests to call for gun control

A survivor of a 2016 school shooting in Ohio said he was ordered to apologize for taking part in a mass student walkout.

Cooper Caffrey was among dozens of students at Madison High School, in Middletown, who received detention after they took part in the March 14 protests to call for gun control.

The walk out took place just one month after the Parkland shooting that left 17 dead in Florida.

The Madison High Schoolers have experienced their own fair share of tragedy.

Two years ago, student James Austin Hancock stole a gun from his great-grandmother and opened fire in the cafeteria. Four of his classmates, including Caffrey, were injured but thankfully, none were killed.

However, when the 43 students chose to join the national protest, they were punished.

Caffrey, now 16, said he felt like he’s been ‘shot all over again’ after being told to apologize for taking part in a mass student walkout.

The teen had been tucking into his lunch on February 29, 2016, in the school cafeteria when he was shot by Hancock. Another student was shot, while two others were injured by shrapnel while running away.

His father Marty Caffrey said that he never expected the school to support the movement.

‘The whole purpose of a walkout is to protest against an establishment,’ he wrote on Facebook. 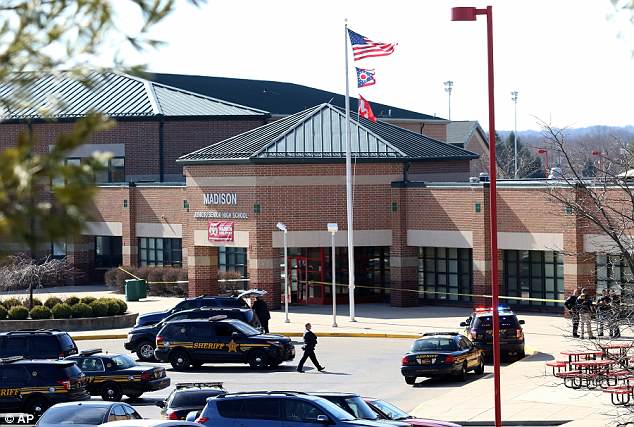 In this February 29 photo, deputies are shown standing at the scene of the school shooting 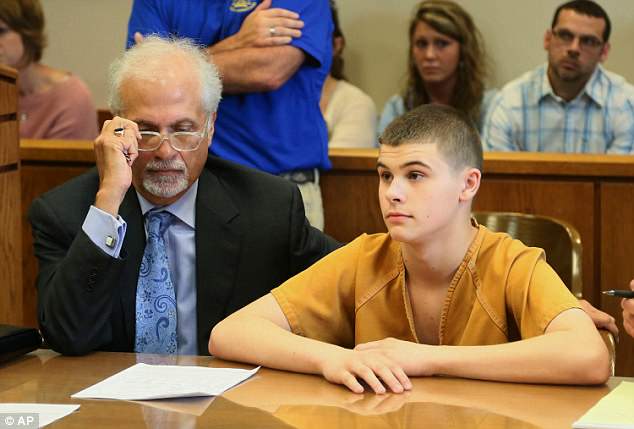 James Austin Hancock sits next to his attorney Charlie Rittgers Sr. while in court in Hamilton, Ohio where he pleaded guilty to four counts of attempted murder and one count of inducing panic

The shooter pleaded guilty to four counts of attempted murder and one count of inducing panic, and was sentenced to six years in a juvenile facility with potential for an extended sentence if he commits another crime.

Authorities said Hancock, who was 14 at the time, took a relative’s loaded gun to school and opened fire in the cafeteria, hitting two students.

Two other students were injured by shrapnel or while running away.

‘There really isn’t a good motive for what he did,’ defense attorney Charles Rittgers said.

‘You’re dealing with the mind of a 14-year-old.

‘And as most people know, especially at that age, they’re immature and they act sometimes impulsively.’

He said Hancock’s actions ‘came totally out of the blue’ and that he did not have a history of causing trouble.

He said the teen is sorry for what he did and is relieved no one was hurt more seriously than they were. Authorities have said all four students recovered.

The Associated Press generally does not identify juveniles charged with crimes, but Hancock’s name was widely reported.

Brant Murray, a 13-year-old student hit in the legs by shrapnel in the shootings, was at the court with his mother, Ginger Weaver. 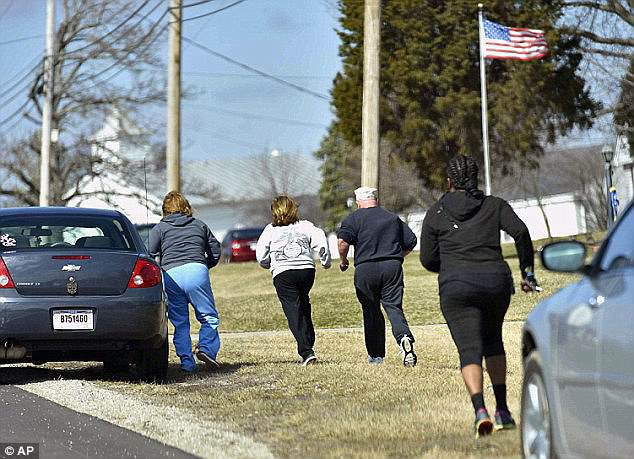 She said ‘physically, he’s fine,’ but he does not talk much about that day, adding he did not even know Hancock.

She thought Hancock should have been charged as an adult.

Hancock was indicted in March as a juvenile under a serious youthful offender classification.

Butler County Prosecutor Mike Gmoser said the grand jury had the option of indicting Hancock as an adult but chose to charge him under the juvenile classification.

The serious juvenile offender status results in a rare blended sentence with both juvenile and adult penalties.

Rittgers said Hancock will be in a juvenile detention center until he turns 21, and if he stays out of trouble in the meantime, the threat of the adult sentence would go away at 21.

If not, a prosecutor can request he be moved into the adult system.

There, he could face dozens of years in prison, depending upon Craft’s sentencing decision in June.

A single attempted murder charge carries a possible 11-year sentence with extra years because the case involved use of a firearm and was in a school zone.