Students in Washington DC will need to prove they are Covid-free before they can go back to school after Thanksgiving.

Public school pupils in the capital must show a negative Covid test on Sunday November 27, even if they are fully vaccinated.

The requirement harks back to last year when some children were required to produce negative Covid tests before attending class.

But case rates in DC have been falling since the start of the year — and dropped 39 per cent in the week ending November 16 to just 268 cases, out of a population of over seven million.

And the death rate for the same week was less than ten.

The DC public schools administration fear that families coming together for Thanksgiving will lead to a spate of new Covid cases.

Children who test positive must stay isolate at home and miss out on in-person activities at school for at least a week.

And DC schools have announced they will have the same protocol in December for the winter break.

District of Columbia (DC) public schools handed out tests to pupils prior to the Thanksgiving break, as did Covid centers and rapid test sites

The ‘test to return’ requirement comes despite low levels of Covid in the capital since July. Case rates have been falling since then, and have not been at high levels since January 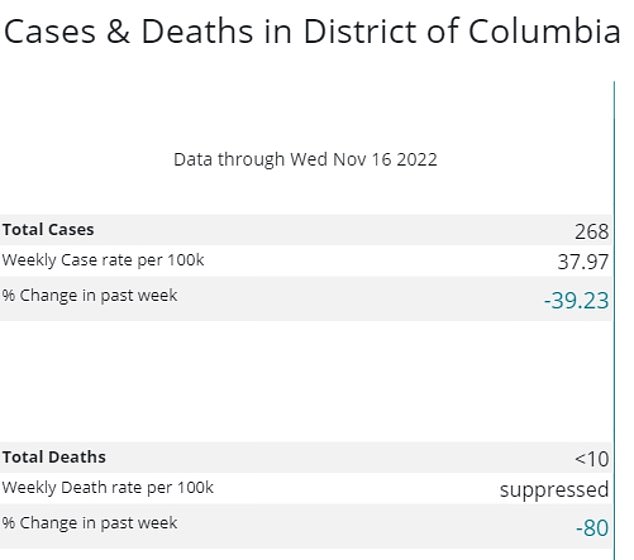 For the week ending November 16, the total number of cases in Washington DC was 268, out of a population of over seven million

The weekly Covid death rate has also continued to fall since January this year, remaining under ten for the majority of the time since March

People appear to be more likely to suffer a Covid rebound if they use Pfizer’s antiviral drug Paxlovid, a study suggests.

In the past few months, President Joe Biden, Dr Anthony Fauci and CDC director Dr Rochelle Walensky have all tested positive again quickly after they stopped taking the drug.

Scientists from Scripps Research Translational Institute in La Jolla, California, compared 127 infected people who used Paxlovid to 43 others who beat the virus without the drug.

They found that 14 per cent of Paxlovid users tested positive for the virus in the weeks after recovering. Meanwhile, only nine per cent tested positive again in the group that didn’t use the antiviral.

DC Public Schools tweeted: ‘To support a safe return from Thanksgiving break, all students and staff will be expected to provide proof of a negative Covid-19 test on Sunday, November 27.’

Students must take the test 24 hours before they plan to return to class, and test results must be uploaded to the DC public schools’ website.

If families do not have online access, the student must bring a photo or copy of the negative test with them on their first day back after Thanksgiving.

DC’s own Covid metrics recognize the capital’s Covid level as ‘low’, with ‘limited impact on the healthcare system’ and ‘low levels of disease severity’.

And tests can sometimes show false-negative and false-positive results if test instructions are not followed properly.

The risks of an incorrect test can also be down to the type and sensitivity of the test, and the accuracy of the lab analysis, the Mayo Clinic said.

DC public schools’ announcement was met with heavy criticism on social media, including the requirement being called an ‘utter disgrace’.