A white Texas school superintendent who posted online that ‘You can’t count on a black quarterback’ in reference to Houston Texans quarterback Deshaun Watson has resigned.

In a letter Saturday to the Onalaska Independent School District board, Lynn Redden says his comment posted earlier in the week on the Houston Chronicle’s Facebook page was ‘wrong and inappropriate.’

He also apologizes to Watson, who is black, and points out that Watson could have criticized him for his comment but instead ‘chose peace and positivity.’

Redden had criticized Watson for letting the clock run down before completing a pass in a 20-17 loss to the Tennessee Titans last Sunday.

Redden’s comment prompted the school board to convene a special meeting Saturday. 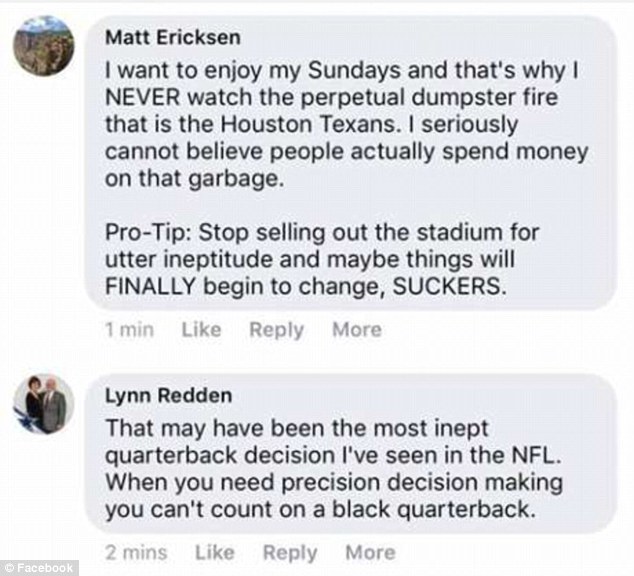 Erikson says he felt it was important to call out what he says was blatant racism.

‘It’s important to make sure horrible words are met with consequences, especially for those in powerful positions with influence,’ Ericksen said.

Redden had posted the comment in reference to a play in which Watson held the ball as the final seconds ticked off the clock.

‘That may have been the most inept quarterback decision I’ve seen in the NFL,’ he wrote.

Deshaun Watson taking the high road (I wouldn’t expect anything else from him) while being asked about a racist comment by East Texas school superintendent Lynn Redden toward him. “That’s on him. May peace be with him.” pic.twitter.com/ruczckTXtu

He added: ‘When you need precision decision making you can’t count on a black quarterback.’

Redden said he didn’t realize it was a public posting.

The superintendent told Chron.com in an interview ‘I totally regret it.’

Redden said he didn’t mean for it to come off as racist, but defended his comment none-the-less.

‘Over the history of the NFL, they [black quarterbacks] have had limited success,’ Redden added citing ‘statistics.’

However, he says ‘I wish it had never been posted,’ and added that he hopes none of the students in his district saw the post.

The Onalaska school district has about 1,020 children with a mostly white student body.