A schoolboy today admitted selling £2 ‘Donkey Kong’ ecstasy over Snapchat to a tragic 13-year-old boy who died in a park.

The two boys arranged to meet outside a garage for Carson to pay for the ecstasy – the first time he had tried the drug. 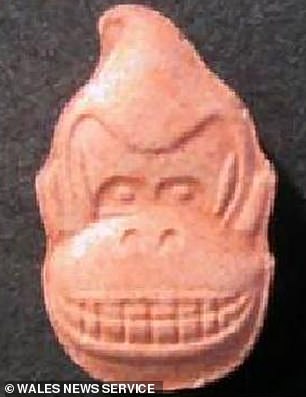 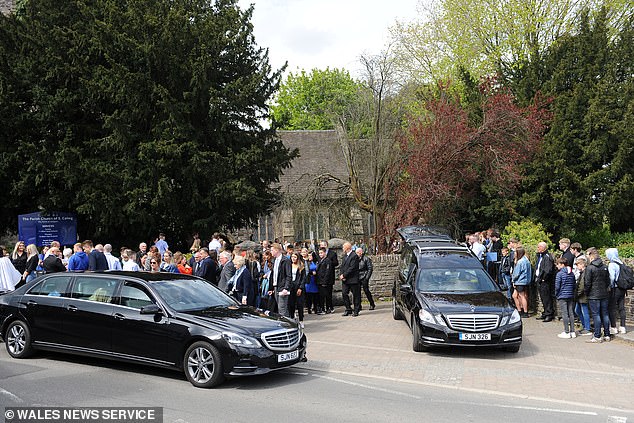 Carson died after taking the drug near his home in South Wales. A large group attended the tragic teenager’s funeral

A court heard Carson started ‘acting strangely’ – before falling and collapsed from a ‘violent reaction’ to the £2-a-time drug.

The teary boy, wearing a blue zip-up jacket and a black face mask, was accompanied by his parents when he appeared at Youth Court in Cwmbran, South Wales, to admit his part in Carson’s death.

Prosecutor Margaret Cunningham said the youngster was just 14 at the time he sold Carson the killer drugs after arranging the deal online.

She said: ‘Emergency services were called to the park after recovering a call that Carson Price, a 13-year-old boy, had collapsed.

‘His friends told paramedics he had taken ecstasy and was rushed to hospital but tragically he died.

‘Inquiries followed one friend said he had seen Carson contacted a male on Snapchat and made arrangements to meet him to buy three pills.

‘He told him to meet him outside a garage and 10 minutes later he returned with the tablets.

‘They went to the park and Carson offered one tablet to a fiend but he declined.

‘Carson initially took one-and-a-half tablets and later the other one-and-a-half. He began acting strangely and fell about before he collapsed..’

Carson died in Ystrad Park near his home in Hengoed, Caerphilly, in April last year.

The court heard the 15-year-old schoolboy was arrested days after Carson’s death and when interviewed he told police he’d been threatened by an adult male to sell the drugs.

But Miss Cunningham said text messages showed the boy had continued to try and secure more drugs for sale – even after Carson had died.

The boy, now 15, spoke only once – in a quiet and shy voice – as he answered his name and pleaded guilty to selling class A drugs.

Judge Martin Brown said the fact the boy was still selling the killer drugs after Carson had died was ‘chilling’.

He said: ‘It is simply chilling that after the death of Carson he was still looking to secure tablets for sale.’

The judge adjourned the case for sentence as he asked for a report into the boy as he had been arrested since for carrying a knife.

He said: ‘You know the publicity this case has attracted.

’15 months ago this occurred – this is not something the family of the deceased will recover from easily if at all. I want to know if you have learned from this.’

Miss Cunningham said Carson had told friends he had bought drugs from the boy once before but the boy denied this.

Sentence was adjourned until August 18.

Carson, described as a ‘cheeky little boy’, was found ‘pale and shaking’ in the park at Ystrad Mynach, near Caerphilly, South Wales last year.

A coroner ruled he died as a result of taking ‘excessive’ amounts of ecstasy.

A hearing was told Carson had been taken to the University Hospital of Wales, Cardiff where his condition ‘rapidly deteriorated.’

Coroner’s officer Geoffrey Ronayne said: ‘The emergency services responded to a call of a male youth who had passed out in a park in Ystrad Mynach.

‘On their arrival he was in and out of consciousness, pale and shaking.

‘He was immediately conveyed by ambulance to the University Hospital of Wales, Cardiff.

‘His condition rapidly deteriorated and despite medical intervention and life saving procedures, he passed away later that evening.’

‘He reacted violently to this drug and despite the efforts of medical staff died from the effects on 12th April 2019 at the University Hospital Wales.’

Carson’s mother Tatum Price, 39, appealed for other youngsters to reject the drugs – which are being sold for as little as £2-a-pill.

In a statement his mother and father Brian told how ‘our lives changed forever when our little boy was taken away from us.’

The pair said: ‘Thinking of another family going through what we have is unbearable.

‘We urge people to talk about the devastating consequences that drugs can have and how they destroy lives.

‘Carson was bright and caring, kind and loving. He was a cheeky little boy.’