Schoolboy, 15, dies after being stabbed in Wolverhampton

Victim: Keelan Wilson was described a kind-hearted boy who once raised hundreds of pounds for Great Ormond Street Hospital in a sponsored hair-cut

A 15-year-old boy fatally stabbed just yards from his home was ‘an angel’, his heart-broken grandfather has said.

The young victim was named by George Ellitts as his grandson, Keelan Wilson, a kind-hearted boy who once raised hundreds of pounds for Great Ormond Street Hospital in a sponsored hair-cut, he said.

Speaking outside the family home in Wolverhampton on Wednesday, Mr Ellitts paid tribute to Keelan, who was fatally wounded in an attack on Tuesday night.

Mr Ellitts added: ‘They were all supposed to be going on holiday a week tomorrow, to Egypt.’

He said: ‘He’s lived with me all my life.

‘He raised a few hundred pounds for Great Ormond Street Hospital a few years back, he had his hair cut, he had the lot off.’

He added that the boy’s mother Kelly, who also lived at the address just a few metres from the scene of the attack in Strathfield Walk, was ‘in a bad way’.

She was seen leaving the home in tears, being comforted by other family members, and getting into a car as scenes of crime officers continued forensic work behind the nearby police-tape cordon.

The teenager loved cars and had a bright future ahead, having just enrolled at college in Birmingham, and was due to turn 16 in July, Mr Ellitts said. 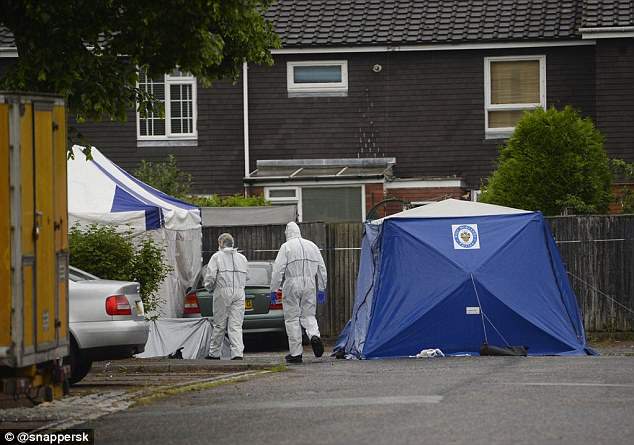 Forensics officers are at the scene in Strathfield Walk, Merry Hill, Wolverhampton, where a 15-year-old boy was stabbed and killed 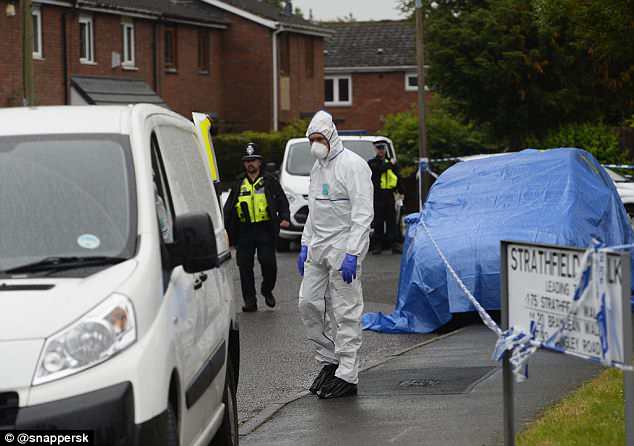 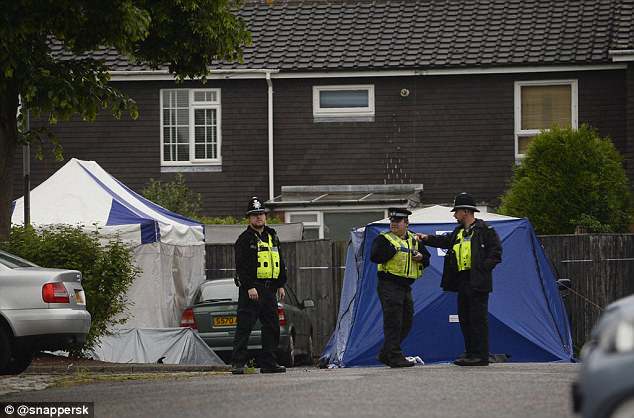 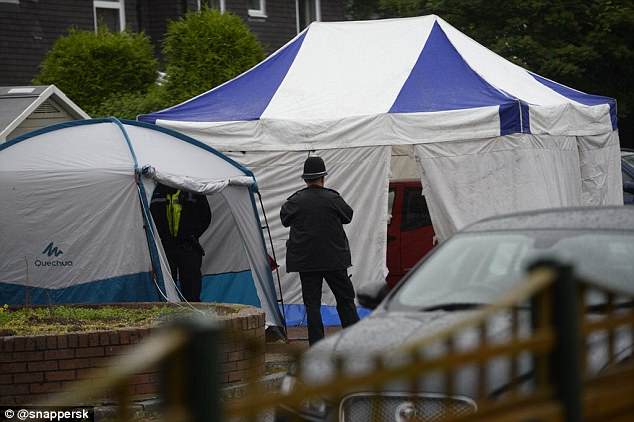 Police were called to Strathfield Walk, Merry Hill, just after 11pm following reports of disorder involving a group of youths 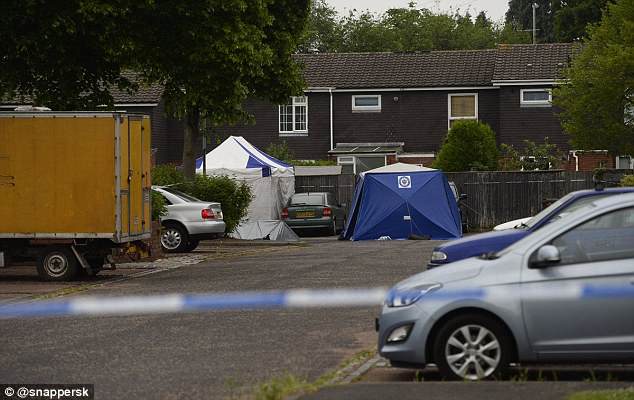 Police are knocking on doors to piece together how the schoolboy was stabbed. Officers have placed a tent over a car at the scene

‘Keelan was such a nice, smiley lad.

‘The family have been here a long time, he’s never been any trouble, always been a lovely lad, and he’d always say ‘Hello, Mrs T’.

Keelan was with a friend in the street that runs along the back of his home, when he was attacked.

West Midlands Ambulance Service said it was called to Strathfield Walk at 11.08pm to reports of a stabbing and found a boy with serious injuries.

Crews administered advanced life support on the way to hospital, but shortly after arriving the youngster was confirmed dead. 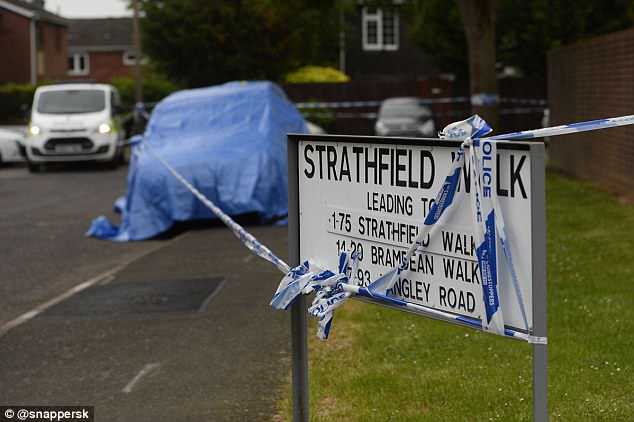 The driver of the taxi, which was covered by police tarpaulin near the scene, described being attacked by a group of youths after he stopped to pick up a fare

Chief Superintendent Jayne Meir, West Midlands Police’s neighbourhood policing commander for Wolverhampton, said someone in the community knew who had carried out the attack and urged them to come forward.

Speaking at the scene, she also pleaded with parents to ‘have a conversation’ with their children about carrying knives.

She said: ‘It’s very tragic incident where the individual has been stabbed and we are actively seeking those responsible.’

‘It’s absolutely devastating that our young people are carrying knives and the consequences of carrying those knives has ended in the loss of life. 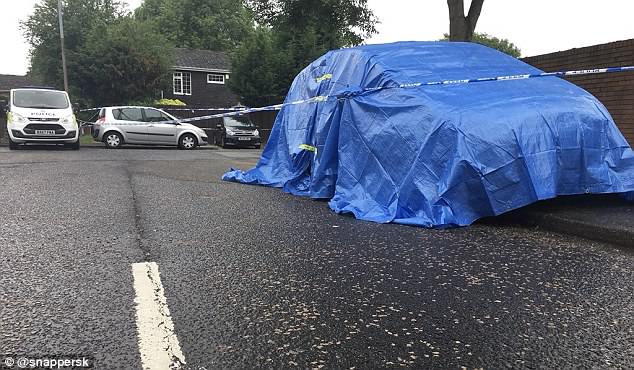 Detective Chief Inspector Chris Mallett, from Force CID, said: ‘A young boy has tragically been killed and we are determined to find out why this has happened’ 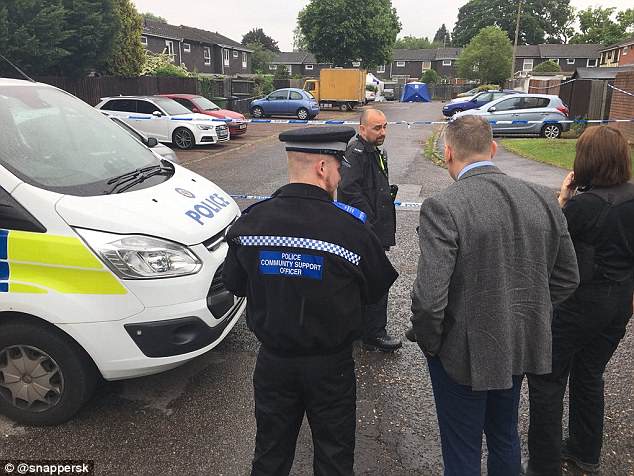 ‘He was 15 years old, somebody knows who was responsible and they need to come forward.’

She said the police were working on whether it was ‘a random attack’ or there was a motive.

It comes amid a spike in knife crime across the West Midlands, with 16-year-old Ozell Pemberton fatally stabbed near a bus stop in Sutton Coldfield, Birmingham, on May 17.

Ms Meir said: ‘I appeal to members of the public who have got young people to sit down and have a conversation with them and tell them this is the consequence of carrying knives.

‘We are seeing too many of these incidents, not only in the West Midlands, but across the country.

‘It needs to stop.

‘And we need your help to stop it.’

She said the youngster’s next of kin had been informed and that investigators were working ‘as swiftly as possible’ to bring those responsible to justice.

Asked about the account of a taxi driver eyewitness who described a group of four or five armed attackers approaching the victim and his friend, Ms Meir said ‘a group’ had been involved.

She added: ‘We do know this was a violent disorder involving more than one person.’