Schoolboy, 16, ‘fled on a Boris Bike after stabbing 17-year-old boy to death’

Ayoub Hassan (pictured), 17, was fatally wounded by a knife wieding 15-year-old boy in an alleyway near West Kensington tube station. He died in hospital later the same day

A teenager was fatally stabbed straight through the heart by a schoolboy who cycled off on a Boris Bike, a court heard today.

An off-duty nurse battled in vain to save Ayoub Hassan, 17, who was fatally wounded by a knife-wielding 15-year-old boy in an alleyway near West Kensington tube station in west London, the Old Bailey was told.

India Noakes, a trained nurse who was passing by, gave the victim First Aid at the scene before he was rushed to hospital, the court heard.

But the victim died in hospital later the same day.

A 16-year-old boy, who cannot be named for legal reasons, denies the murder of Ayoub on March 7 this year.

The defendant, who was just 15 at the time of the stabbing, sat in the dock wearing a dark blue suit and was joined by a youth offending worker.

He has already pleaded guilty to possessing a knife.

Anthony Orchard, prosecuting, told the court: ‘Several members of the public had seen a group of youths loitering in the area, smoking, in the hour before the stabbing. 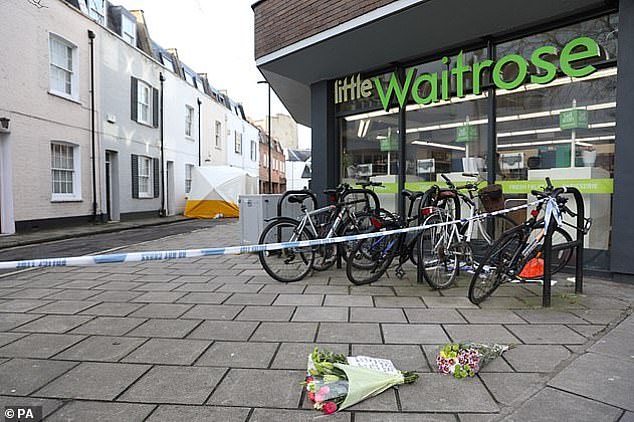 Ayoub Hassan, 17, was fatally wounded near this Waitrose store. The crime scene at the time was taped of my police and flowers were left by well-wishers 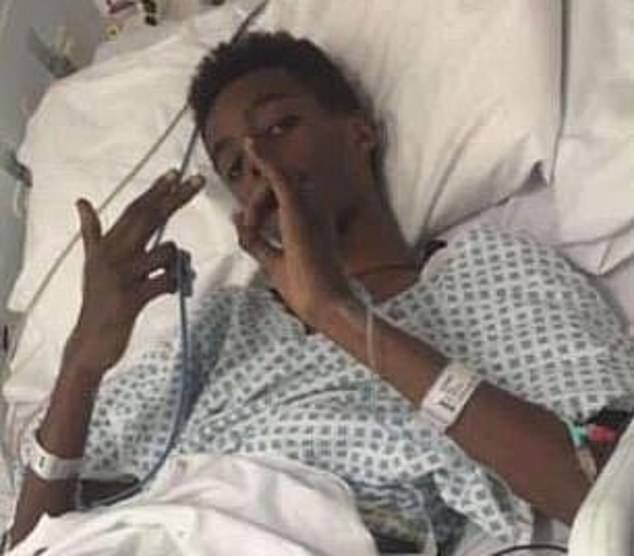 None of the witnesses would co-operate with police and it is still unknown why Ayoub (pictured, in an undated image taken in hospital) was attacked

‘Just after 2pm, a youth was heard to shout, ‘Oi this way, this way’. Another youth was seen holding Ayoub Hassan.

‘Ayoub Hassan’s head was slumped down, and he looked limp.

‘Members of the public went to help. One in particular, India Noakes, a trained nurse, saw Ayoub Hassan being held up.

‘She went across and asked what had happened. The youth holding Ayoub Hassan said, ‘No, he’s been stabbed.’

‘She asked for an ambulance and was told one was on the way. When she asked for police, one male said, ‘No police’.

‘Ms Noakes treated Ayoub Hassan until paramedics and the police arrived. He was struggling for breath and she was unable to obtain a readable blood pressure. 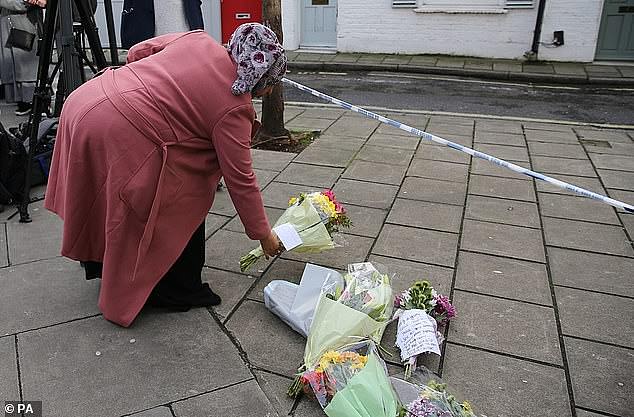 A family friend, Amina Osman, adds to the bouquets of flowers piled up in memory of Mr Hassan, on March 7

‘Ayoub Hassan was taken to St. Mary’s Hospital, Paddington. He arrived at about 3pm.

‘On inspection of the heart, there was found to be a 6cm laceration across the left ventricle, with a ‘through and through’ injury, suggesting the implement used to injure Ayoub Hassan had penetrated both sides of the heart.

‘Doctors were unable to adequately control the loss of blood. Both lungs had collapsed. Resuscitative efforts involving a team of eight surgeons and doctors tried to save Ayoub Hassan’s life. He was pronounced life extinct at 4pm.

Mr Orchard showed the jury screenshots from CCTV footage taken in the alleyway, and claimed it showed the defendant stabbing Ayoub before cycling away.

The accused sat expressionless in the dock as he watched the footage played back.

Mr Orchard said: ‘The defendant appears to become agitated and squared up to Ayoub Hassan. Ayoub Hassan is not seen to act aggressively.

‘Suddenly he punched out with the knife, once, striking into Ayoub Hassan’s chest. The knife is seen.’

‘The defendant left the alleyway and is captured on CCTV mounting a ‘Boris Bike’ and cycling away.’

Police later found a knife down a nearby drain and another in a cupboard in the alley.

The defendant answered ‘no comment’ to all questions in a police interview and neither confirmed or denied being the person shown in the CCTV footage.

None of the witnesses would co-operate with police and it is still unknown why Ayoub was attacked.