A five-year-old boy who dreams of running his own shop was left in floods of tears after heartless thieves stole the contents of an honesty stall he runs at his parents’ glamping site.

Harry Clare was left distraught after discovering the soap and lip balm made by his mother, Rosie, as well as the contents of an honesty box used by customers to pay for the goods had been swiped overnight.

Harry, who also sells eggs and goats milk from the stall, goes to restock each morning before school when he also retrieves any takings which have been left in the honesty box beside a price list.

Harry Clare (pictured) was left heartbroken after thieves stole the entire contents of his honesty stall which he runs outside his parents glamping site in Malvern, Worcestershire 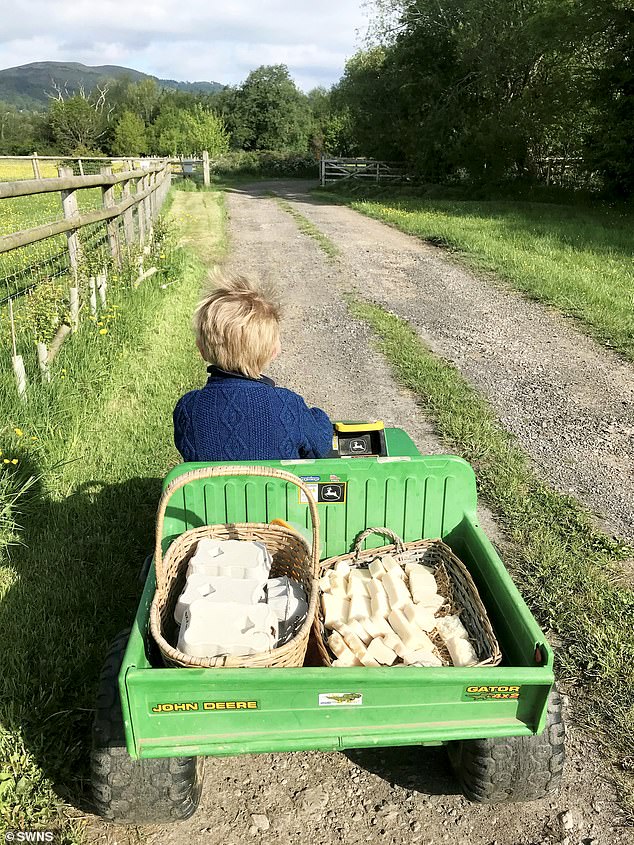 Harry, who wants to be a shopkeeper when he grows up, sells his family’s eggs and milk as well as homemade soap and lip balm. He says the theft has not deterred him from his dream

But when the youngster went to check his stall on Tuesday he found only his table and a sign left.

Harry’s ordeal went viral after auctioneer Phillip Serrell, who has appeared on BBC One shows Bargain Hunt and Flog It! tweeted about the incident – and the schoolboy has been inundated with messages of support and donations from as far afield as New York.

Mr Serrell, who has a saleroom near the glamping site in Welland, Worcestershire, wrote that the thieves ‘will probably be too ashamed to return (Harry’s money and stock) but if they get to read this I hope it costs them a few nights’ sleep.’

Yesterday he thanked people for their response and said he had been motivated to try to help ‘make our world a place where 5-year-old’s don’t get things stolen from them’.

WHAT IS AN HONESTY BOX?

An honesty box allows customers to pay for products or services from an unattended stall.

The practice is common in rural areas and campsites where the footfall is low and supervising the stall is not possible or economical.

The method relies on the customers’ honour to leave the correct amount of money in exchange for the products they take from the stall.

Mr Serrell also urged people to donate to a charity local to them in Harry’s name, and use the hashtag #AGiftfromHarry to record the donation so the schoolboy can see how his experience has helped others.

Harry said the thieves’ cowardly actions have not deterred him from becoming a shopkeeper when he grows up.

He said: ‘I lost my shop and feel really sad. I liked making people happy.

‘I still want to be a shopkeeper because I want to sell my mummy’s soap. I’m going to carry on with it.’

His 35-year-old mother said they decided to set up the honesty stall when Harry told her that he wanted to become a shopkeeper after being inspired by a book he read at school.

Miss Clare said: ‘The shop is his pride and joy. He is really proud of it. He still wants to be a shopkeeper and I put a few things back out for him.

‘In the morning he was very upset. There were lots of tears.

‘He had never lost anything from there before and didn’t understand why somebody would do that to him.

‘I did tell the police and I got a crime number. But I don’t think they are going to do anything about it.’

As well as visitors to the glamping site run by Miss Clare and Harry’s father, Chris Collins, 41, the schoolboy also sells to walkers using a nearby footpath, and even accepts PayPal payments.