With the ruins of a hellish Islamic State prison behind them, children clutching balloons sit in the playground of their bombed-out school reading text books.

Inside their rubble-strewn classrooms are the remnants of a fierce battle, masked only by a few colourful drawings hung on bullet-ridden walls.

Not too long ago, the screams from Yazidi women taken as sex slaves and imprisoned in the building next door could be heard from the streets below.

The pupils of Rabya al Adawia school will not easily forget what life was like under the iron fist of Islamic State in the Syrian city of Raqqa – when children were denied an education. ‘There was war and fighting, they killed people. Everything was bad,’ Yazin Al Asaf, 11, tells me.

Haunted by the past: A bombed building used as an Isis prison is the backdrop to head Ibrahim Ismail’s talk with pupils 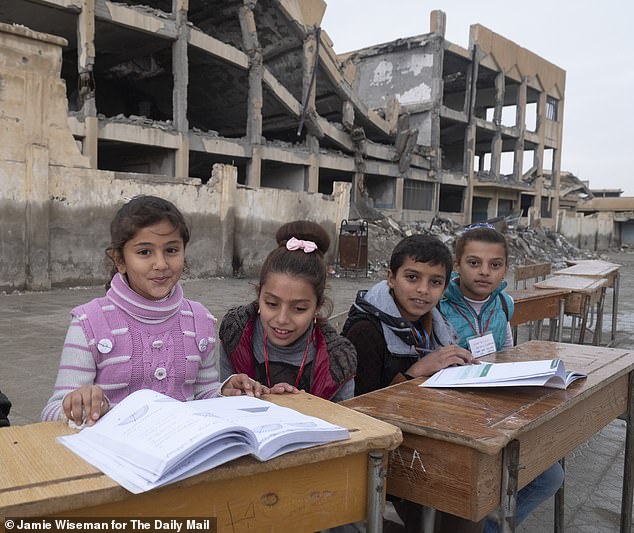 School children in Raqqa catch up on studies in the playground of their school, adjacent to a building used by ISIS for Yazidi women prisoners

His friend Khawla Hussein, the same age, cries next to him as she talks of her two brothers who went to fight with the terrorists and never came back. ‘I remember Daesh [the Arabic acronym for the group], I remember a war and I remember my brothers,’ she sobs. ‘We talked to them two months ago but now nothing.’

It has been just over a year since the city – hub of the militants’ self-styled caliphate – was freed from their three-year rule. Backed by British and American airpower, a Kurdish-led coalition of militias known as the Syrian Democratic Forces (SDF) invaded from the north.

But liberation came at a cost, with Raqqa, the base from which Isis plotted attacks against the West, largely reduced to ruins. 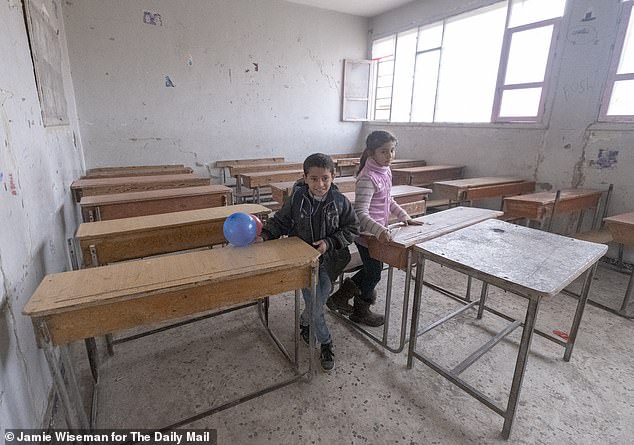 The school was closed under Isis and the children had to stay at home. It is one of 32 reopened at the end of September after volunteers spent months rebuilding parts of it and clearing out the debris.

The school receives no aid. Money for books comes from the Raqqa Civil Council.

Yazin, who likes learning about the past, says he studied at home with his mother but adds: ‘I was sad when I could not go to school. I wanted to learn and play with my friends.’

Ten-year-old Hala, an orphan, beams as she looks at her teacher Reem adoringly. ‘I like going to school,’ she adds. 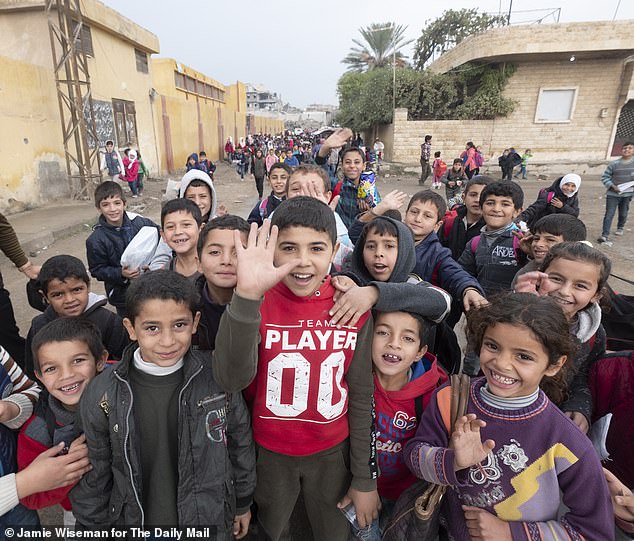 Children from a Raqqa school. The Syrian City had been the capital of the Islamic State caliphate 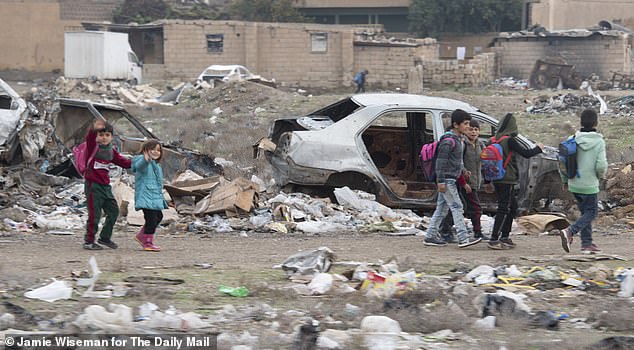 Scarred city: Children go to school through the debris in Raqqa, Syria

Today is a special day because the best-behaved children were awarded prizes. Desks from the classrooms were taken into the school yard for children and their families to sit and watch.

Anas Al Abdullah, 11, cannot remember life before the militants took over. Tightly gripping three balloons given to him at the prize-giving ceremony, he says proudly that he wants to be an engineer in Raqqa – just like his father.

The headmaster of Rabya al Adawia, Ibrahim Shaik Ismail, gives us a tour of the two-storey building. ‘Children who came to this school have gone on to become scientists’, he says with pride. 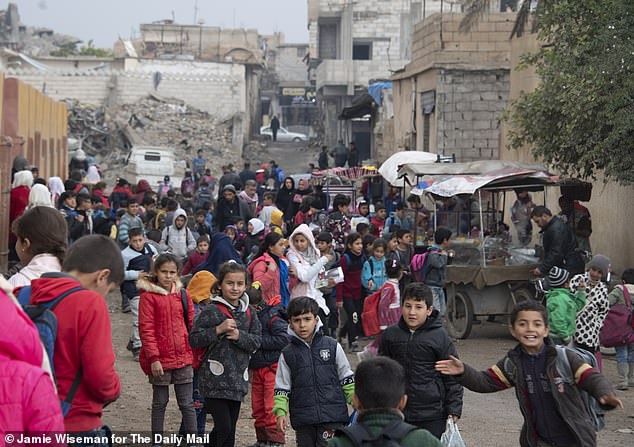 Children from a school in Raqqa. It has been just over a year since the city – hub of the militants’ self-styled caliphate – was freed from their three-year rule. 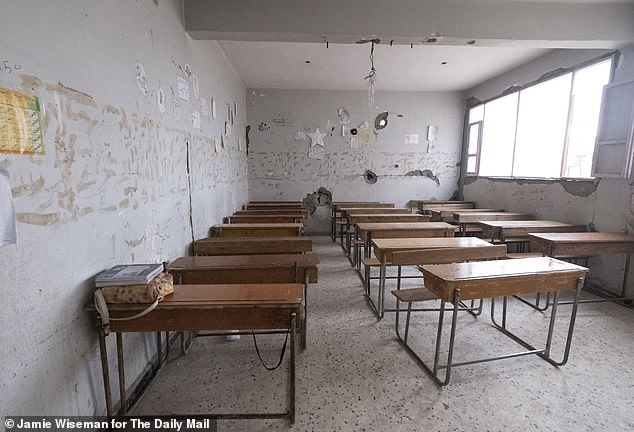 One of the Raqqa classrooms damaged by the fighting. The school receives no aid. Money for books comes from the Raqqa Civil Council

His pupils learn subjects such as Arabic, English, maths and social studies, where they are taught about life in Syria before Isis.

The war with Isis may be won – thousands of its fighters languish in Syria’s jails – but Raqqa is a city on edge. Soldiers patrol the ruined streets, while signs warning of explosives in kettles and water containers are a stark reminder of what the terrorists left behind. 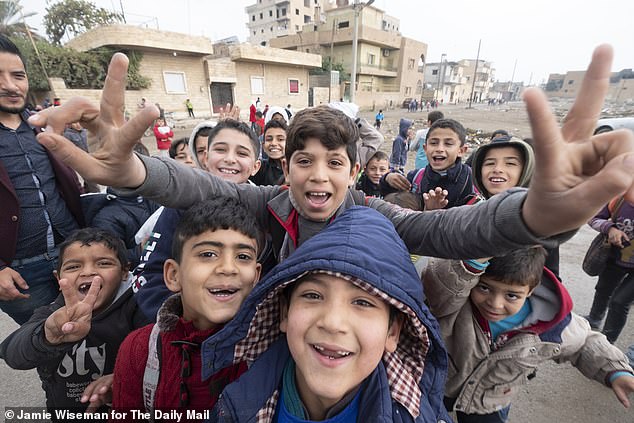 Mr Ismail’s pupils learn subjects such as Arabic, English, maths and social studies, where they are taught about life in Syria before Isis 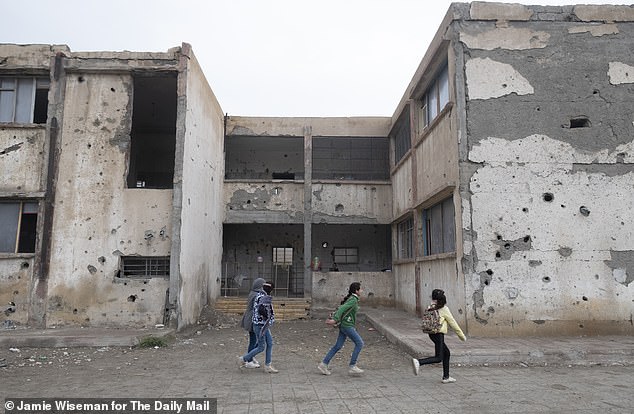 The Raqqa school, adjacent to a building used by ISIS for Yazidi women prisoners which was subsequently destroyed during the time the Syrian City was the capital of the Islamic State caliphate

Just ten minutes in one location and we are forced to move on. Our guard doesn’t like the people watching us after they started chatting on their mobile phones. Hours earlier a house was blown up by a bomb and two days ago a soldier was killed at a checkpoint. Isis spies still lurk in the shadows, says Maher Khalil, Raqqa’s chief of security.

‘We cannot say Raqqa is safe. They have a lot of sleeping cells and carry out a lot of operations,’ he tells me.

The SDF chief, who spent three years on the frontline fighting the militants, adds: ‘Raqqa was the capital of Daesh so we think there are a lot of spies here.’

The city’s inhabitants lived in fear under Isis rule until the city was recaptured in October 2017. It is now under the control of the SDF and hundreds of thousands of civilians have returned from refugee camps to try to rebuild their lives. 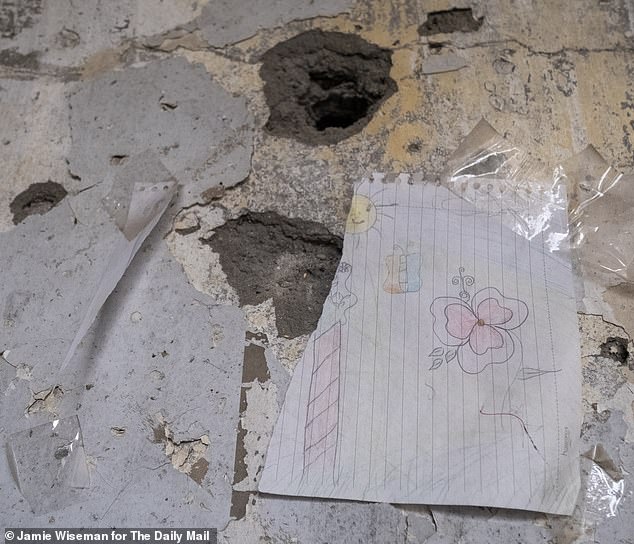 Blitzed buildings without doors or windows are being lived in by families who had their homes destroyed. Shops have been reopened in the remnants of buildings hit by 500lb Paveway bombs. They could still quite easily collapse on to those working below.

A minute’s drive from the school is the square of Al-Naeem, or Paradise, the infamous site of executions and beheadings. It was renamed ‘Hell Square’ among locals and it is easy to understand why. Prisoners were thrown from buildings, beheaded, lashed, or shot while crowds were forced to watch. Amar Ali, 35, works in a juice shop on the square and was witness to hundreds of killings. Does he have nightmares?

‘No,’ he says. ‘When the first person was killed we were shocked but then it became very ordinary. 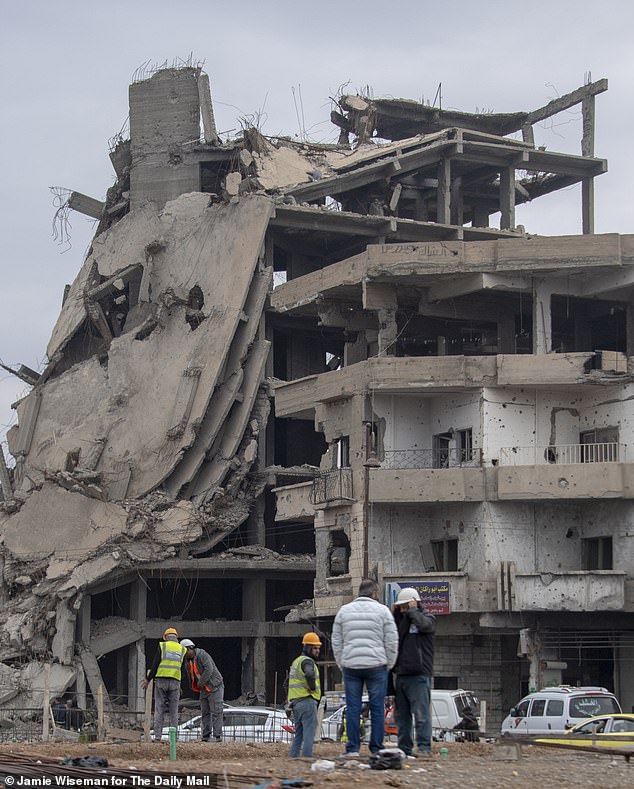 ‘Paradise’ or Al-Naeem Square in the Syrian City of Raqqa, formerly the capital of the Islamic State caliphate. It was the scene of many of the groups public executions

‘When they had a big battle and arrested some soldiers they would bring them here and kill them.’

The mass execution of 300 captured fighters from the regime of President Assad is his worst memory. The soldiers’ brutal deaths were played out in the square – their heads chopped off and put on steel spikes for everyone to see. ‘I watched’, says Mr Ali. ‘There were lots of screams.’

The juice bar was a regular haunt of the Britons who flew out to fight for Isis, he says, who were unmistakable with their British accents and limited Arabic. ‘We liked the British guys,’ he says. ‘The British gave the children candy and money and were smiling with them and playing with them.’

He says the British jihadis were also less interested in punishing them for petty crimes such as smoking because they had come to fight the ‘kaffir’ – non-believers.

Khalid Al Omar, another worker at the juice bar, says a British jihadi tried to recruit him. He identified him only as Abu Dujana. Documents previously uncovered identified a British Isis fighter who went under the same name as being from Manchester. Mr Omar says Dujana boasted of having four wives in Raqqa and urged him to join the terror group, saying: ‘He told me he came here to fight the kaffir.

They forced us to watch

‘He said “I came from Britain for jihad and you are here from Raqqa and you must fight with us”. ‘I just told him “inshallah” [if god wills it]. We told them they were welcome – we couldn’t say anything else.’

Bar owner Zaid Hamadee, 27, adds: ‘It was very bad because you can’t talk, you can’t give your opinion. They force us just watch.’

Another local who lived in fear for three years says he was arrested after his wife was shouted at for lifting her veil slightly so she could tighten her shoes. The Isis fighter grabbed her wrists, so he grabbed the fighter’s arm and told him not to touch her.

He was imprisoned for a week. Now, women can walk without headscarves and people can smoke again in the streets.

British executioner Jihadi John – whose real name was Mohammed Emwazi – also lived in Raqqa with other members of the notorious ‘Beatles’ terror group. He was killed in a street off the main square in a drone strike in 2015.

The hit by a Hellfire missile fired from a US Predator drone from 10,000ft was so precise that it struck his car with no collateral damage. But other operations by the coalition aircraft were less successful, say locals.

Mr Ali, at the juice bar, echoes what others tell us as we tour the city. ‘They made a lot of mistakes and kill civilians,’ he says. 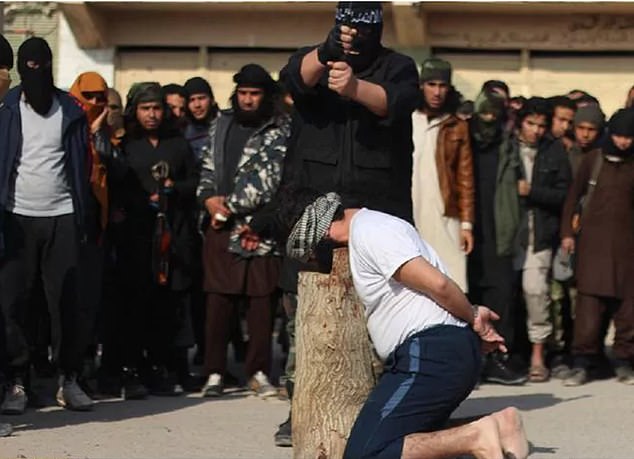 A minute’s drive from the school is the square of Al-Naeem, or Paradise, the infamous site of executions and beheadings. It was renamed ‘Hell Square’ among locals and it is easy to understand why. Prisoners were thrown from buildings, beheaded, lashed, or shot while crowds were forced to watch

‘We welcome the coalition but they have good technology and they can destroy just Daesh – why did they destroy our houses?’

According to Airwars, a monitoring group based in London, Western warplanes dropped more than 20,000 bombs on Raqqa. Around 80 per cent of the city was destroyed and more than 1,400 civilians were estimated to have been killed.

Volunteers are rebuilding homes and schools but the authorities don’t have the international funds needed for the mammoth task.

Was it worth it though? Mr Khalil believes so. ‘I am very sad to see my city destroyed but on the other side when I think we have liberated a lot of civilians from Daesh I am happy’, he says.